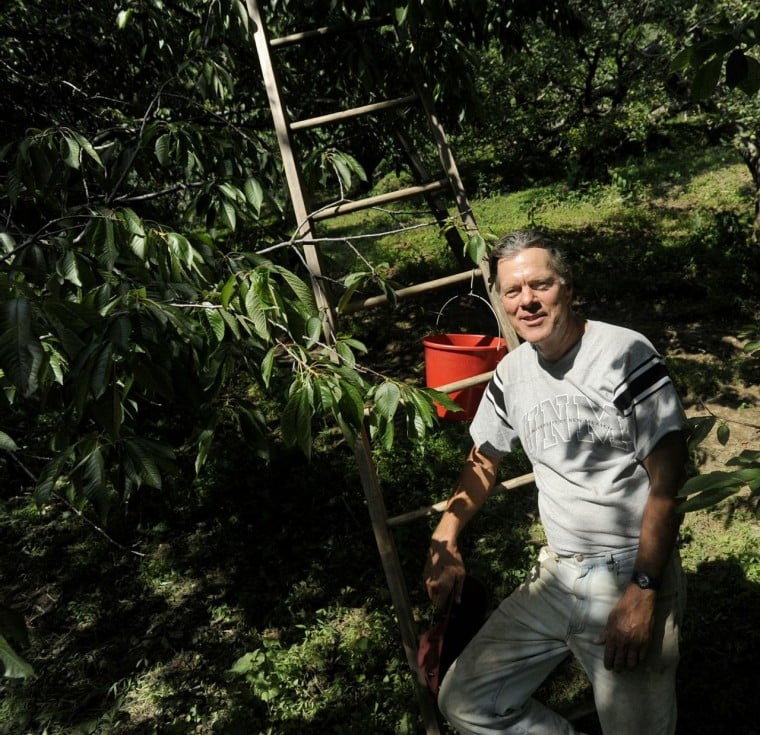 Frank Levering, a writer and farmer who owns Levering Orchard in Ararat, Va., wrote a book in the 1990s with his wife on adapting to farm life; it became a PBS series in 2004. 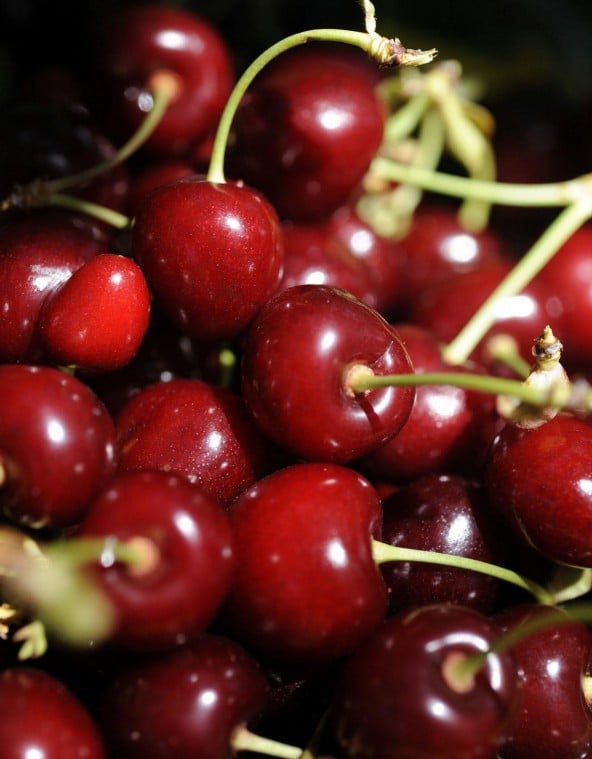 At the Levering Orchard, 47 varieties of cherries grow on 31 acres. 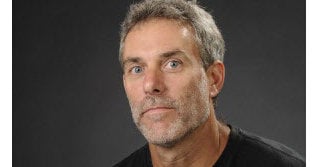 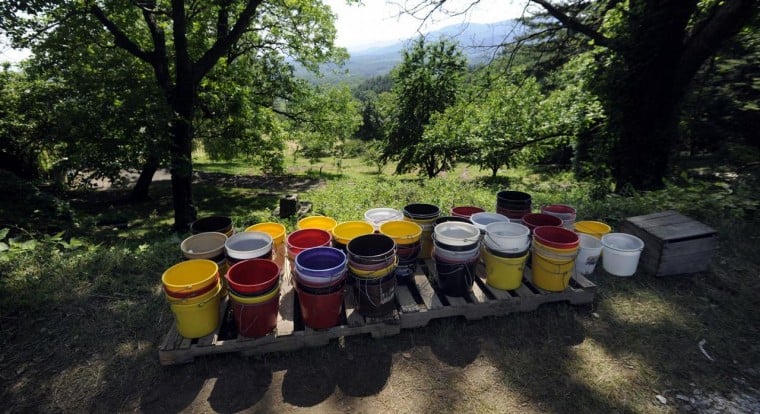 Frank Levering's grandfather grew apples on the farm's 40 acres in the early 1900s. Levering's father dedicated 15 of those acres to cherries.

Frank Levering and I sat on old metal chairs in the shadow of a deeply weathered red barn.

I had come to Levering Orchard on the hottest day of the year so far, one with temperatures more suitable for August than the last day of May. The orchard, devoted mostly to cherries, has been under the careful stewardship of the Levering family going back to his grandfather, more than 100 years ago. Perched on a ridge just across the Virginia line, the mature cherry trees overlook the foothills and Piedmont below.

Levering wears the thin and weathered exterior of someone who works hard on land that demands it, but his demeanor is warm and affable. He is quick to laugh and clearly enchanted with his family's story.

Grandfather Ralph was raising sweet potatoes and strawberries in Tennessee when he decided he wanted to try his hand at apples. He wrote to the Department of Agriculture inquiring where the best land for such an enterprise could be found. When the answer returned an eastern exposure of the Blue Ridge, Ralph Levering set out to discover it, traveling from Roanoke to Asheville by foot and by train. He found 40 acres in Ararat, and began harvesting apples in the 1910s. Ralph Levering would take the apples to Winston-Salem, where he had regular customers, some of whom would invite him to spend the night. His wife, Clara, taught school to local children out of their home. "I still meet people who were her students," Frank Levering said.

Education was important to the Leverings. Ralph Levering had a degree in international law from Columbia University, and once a week he would write letters to the Winston-Salem Journal and Twin City Sentinel, many of which are in the family archives. "He certainly has influenced me from beyond the grave," Frank Levering said.

Frank's mother and father, Miriam and Sam, returned to the family orchard in 1939. Sam Levering had gone off to school at Cornell University and served as an extension agent in New York. After a while, he realized that apples were losing their economic viability in the region and after much research he decided in his mid-60s to take out 15 acres of apples and replace the crop with cherries.

"It was a risky move at the time, and some people thought he had lost his mind," Frank Levering said.

Sam Levering was a confident man with a scientific approach to his endeavors, said his son. He would not live to see his vision of a bountiful cherry orchard.

Frank Levering left home for Wesleyan College on a football scholarship. He followed his undergraduate degree by enrolling in Yale Divinity School but decided to move to Los Angeles to try his hand at writing. He started out driving a cab there. Wanda Urbanska, whom he had met at Yale, would follow him to Los Angeles a year later. They would later marry.

Levering eventually landed work writing for Ralph Waite, who played John Walton on "The Waltons" television show. Waite hired Levering to write a TV script that was never produced, but it got him into the screenwriters guild. Levering became successful when he partnered with two other writers, Allen Adler and Michael Shoob, to write a horror movie called "Parasite" (in 3-D), which became the highest-grossing ("in more ways than one," Levering said) horror movie of 1982. "Parasite" is also notable for being Demi Moore's first starring lead and for featuring the work of special-effects master Stan Winston, who would go on to do "Jurassic Park," "Aliens" and "Avatar." Levering was making a good living as a writer in Los Angeles when his father suffered a heart attack and he and Urbanska decided to return to the family farm.

"There were lean times for six or seven years," Frank Levering said. Sam Levering would live another seven years after a quadruple bypass. Levering and Urbanska worked to pay off the debt that had accrued on the farm through the years by freelance writing in every venue they could find. It would be several years before the cherries would produce a decent crop.

* * * * *In 1992, Urbanska and Levering had further success with "Simple Living, One Couple's Search for a Better Life," a book that chronicled their experiences adapting to life on the family farm and profiled others who were seeking a similar path. The book would spawn a PBS television show and a national movement toward a life shorn of abundant material needs.

"We didn't know it at the time, but we were on the cusp of something really big," Levering said. Though the book was turned down by 20 publishers with comments such as "no one is interested in simplifying their life," it became a best-seller, and Levering and Urbanska would end up on the Oprah Winfrey show. The "Simple Living" series drew a regular audience of 1.6 million viewers.

It is cherry season. Glimpsed through the overhanging branches laden with shiny maroon fruit, the far reaches of the Piedmont disappear in the distance of an early summer haze. Bird song and conversation drift from the trees as customers work their way among the branches. The cherries are seductive and delicious, irresistible, their beauty and fragility all tied up with sweetness and delight. You can also taste the history, perseverance and dedication.

There are 31 acres and 47 varieties of cherries to tend. Levering is replanting 300 to 400 trees a year as the original cherry trees begin to slide beyond their productive years. The fruit is vulnerable to rains, birds, insects, even being blown off the trees. Levering said his biggest challenge is just remaining calm.

"It's a living," Frank says, "but no one is getting rich. If I can get by and keep the place going," but he trails off. There is burden and blessing in honoring the past and questioning what a future free of it may have been. "People of this region and generation often feel a sense of obligation," Levering said. "It may be hard to understand, but life has been wonderfully rich here, a much more diverse life than ever I had in L.A."

Dear Amy: Six years ago, after a gathering with my husband of 30 years, his mom, his two sisters, and a brother-in-law, one of the sisters wro…

Latest on snow-covered roads: Stay off of them, says Winston-Salem official

Winston-Salem had this message for residents Monday morning: “Please, stay home. Stay off the roads.”

For Craig Engels, 2021 was a year filled with miles and milestones. The Pfafftown runner recently signed a new long-term contract with Nike, competed in the U.S. Olympic Trials and earned his MBA.

“It’s been an awesome and busy year,” the 2012 Reagan High School graduate said. “Obviously, I wanted to make the Olympics, but I’ve been having a great time since then.”

Frank Levering, a writer and farmer who owns Levering Orchard in Ararat, Va., wrote a book in the 1990s with his wife on adapting to farm life; it became a PBS series in 2004.

At the Levering Orchard, 47 varieties of cherries grow on 31 acres.

Frank Levering's grandfather grew apples on the farm's 40 acres in the early 1900s. Levering's father dedicated 15 of those acres to cherries.