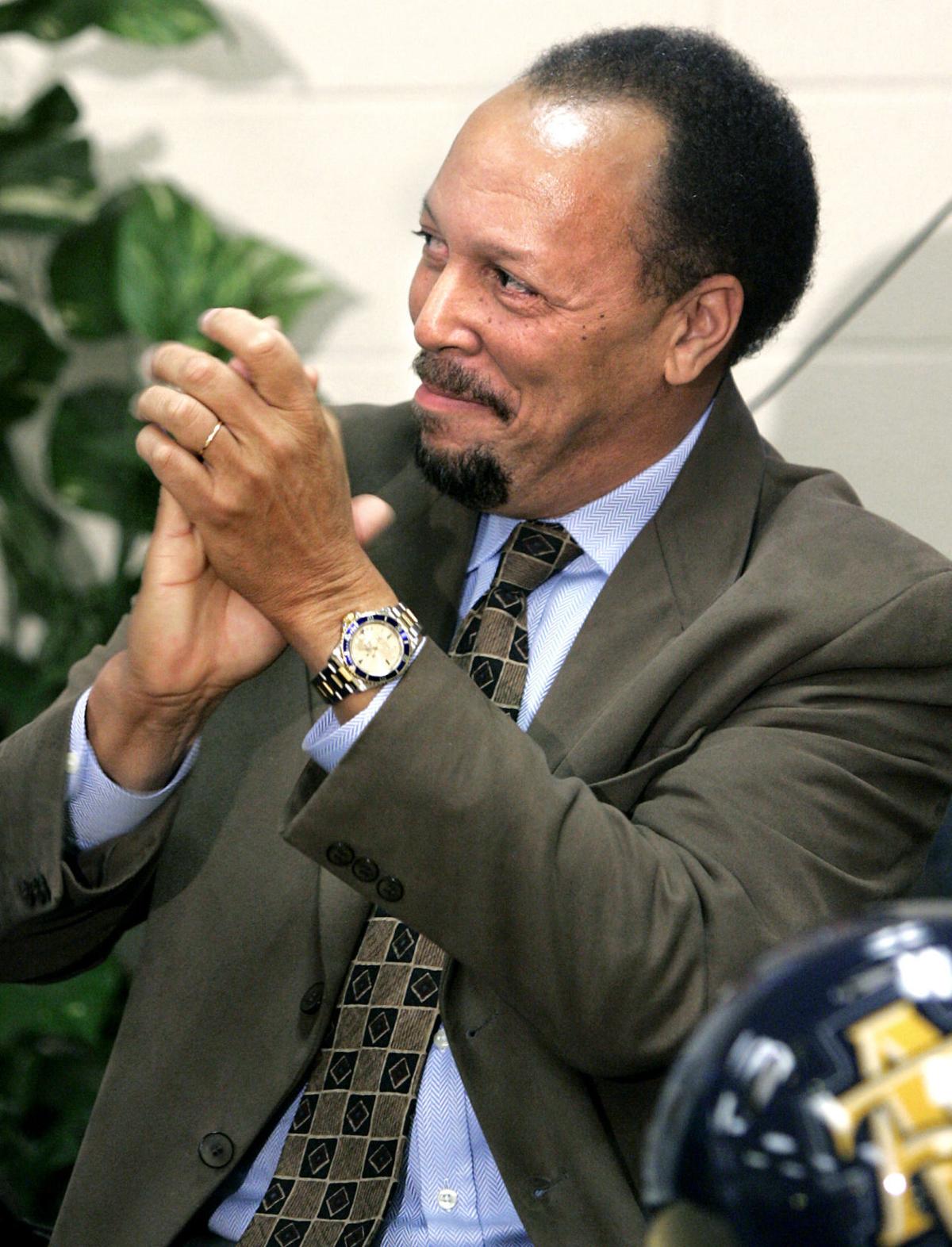 N.C. A&T State University's chancellor James Renick applauds during a press conference at the school to announce the hiring of football coach Lee Fobbs in 2005. 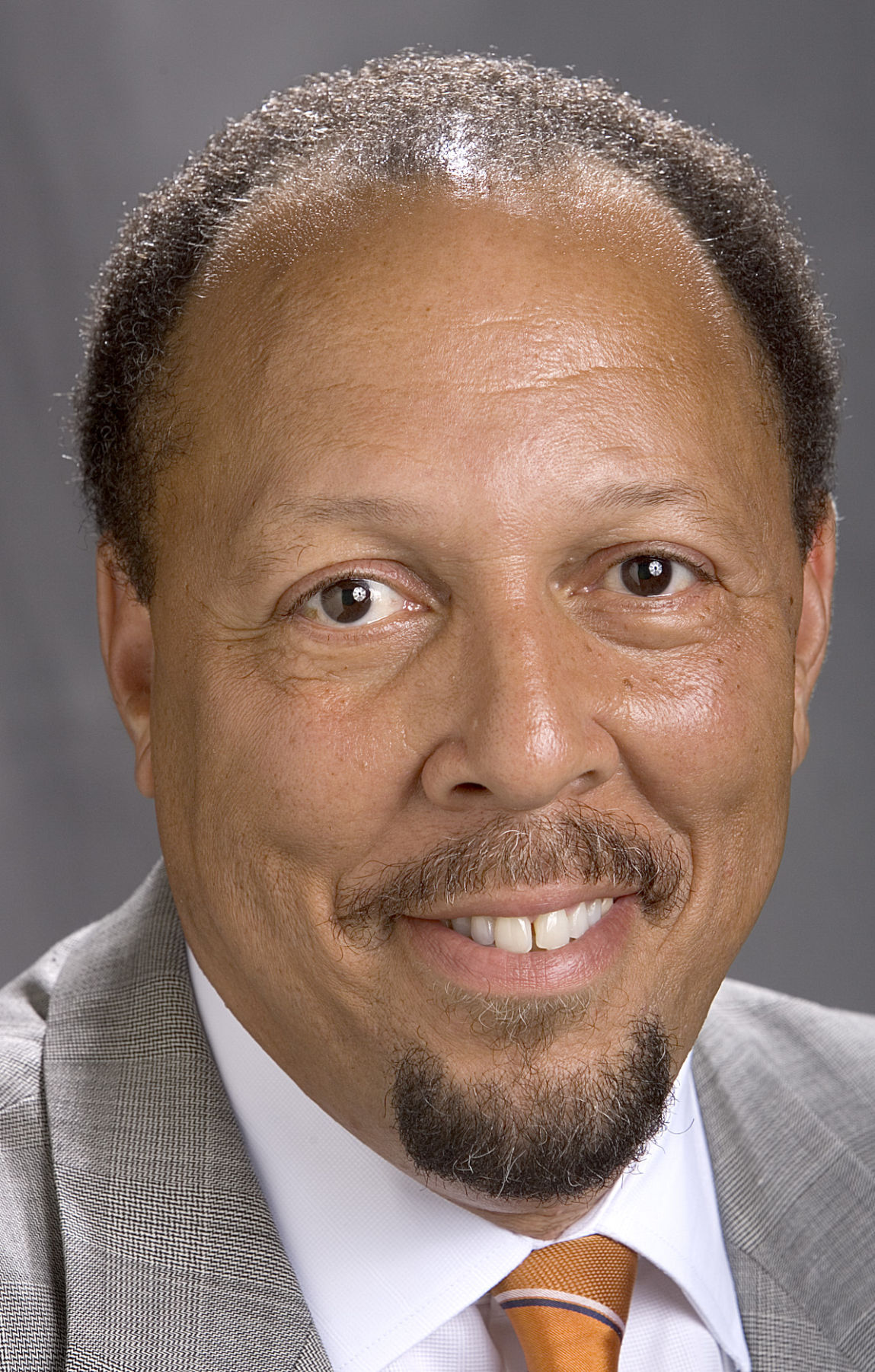 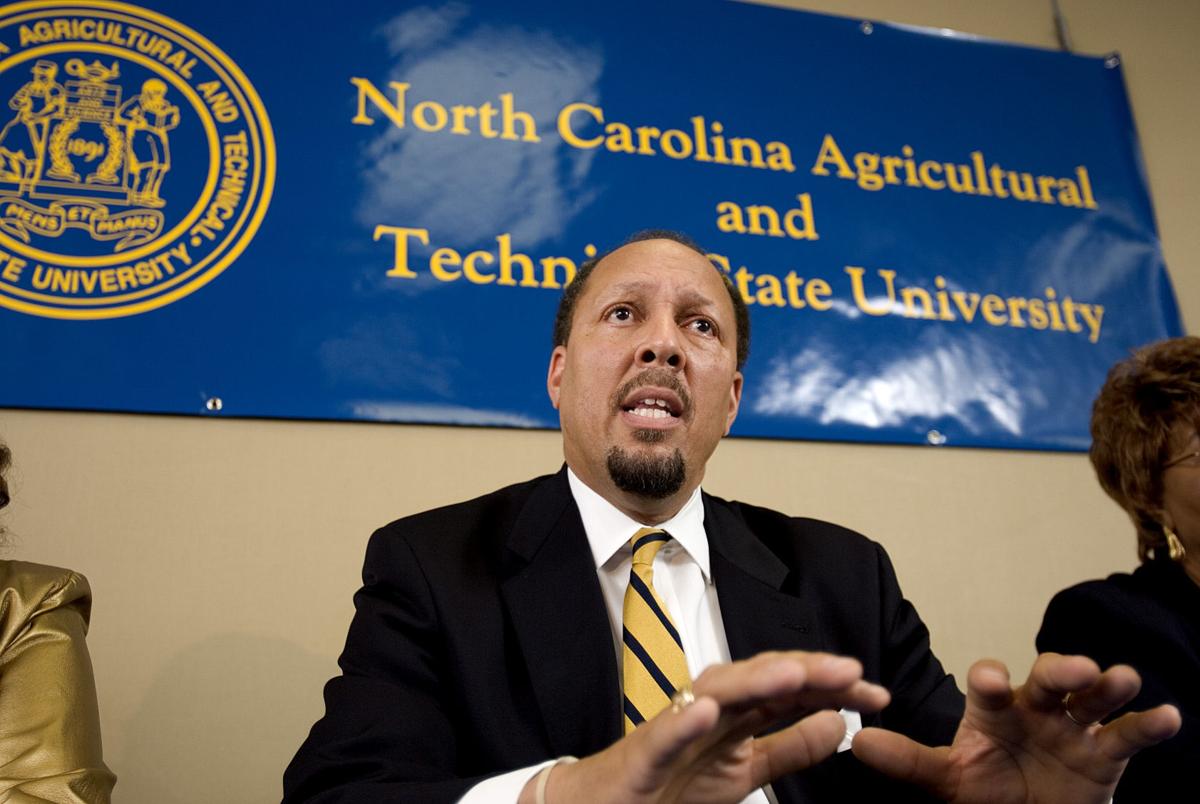 James C. Renick held a news conference in the Dowdy Building on the N.C. A&T State University campus in 2006 to announced his would resign from his post. Renick served as chancellor and professor of political science since July 1999. 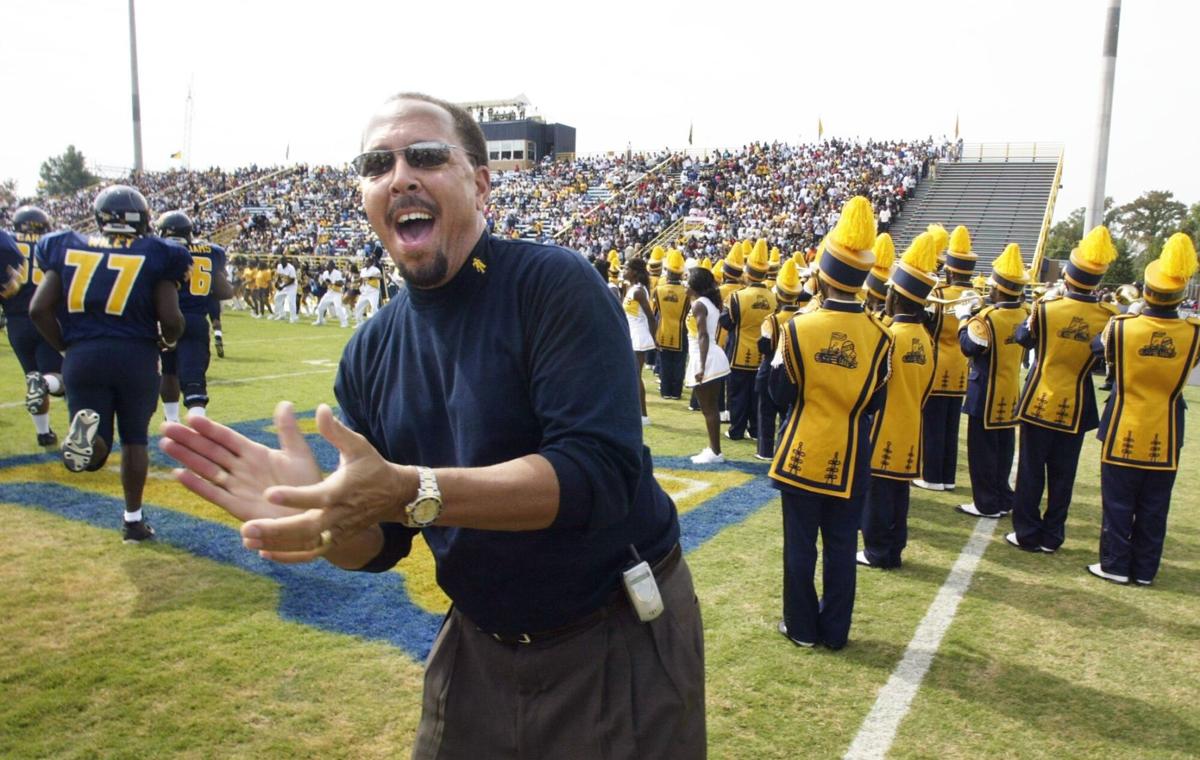 N.C. A&T chancellor James C. Renick cheers the football team as it comes onto the field for a homecoming game against Morgan State University in 2004. 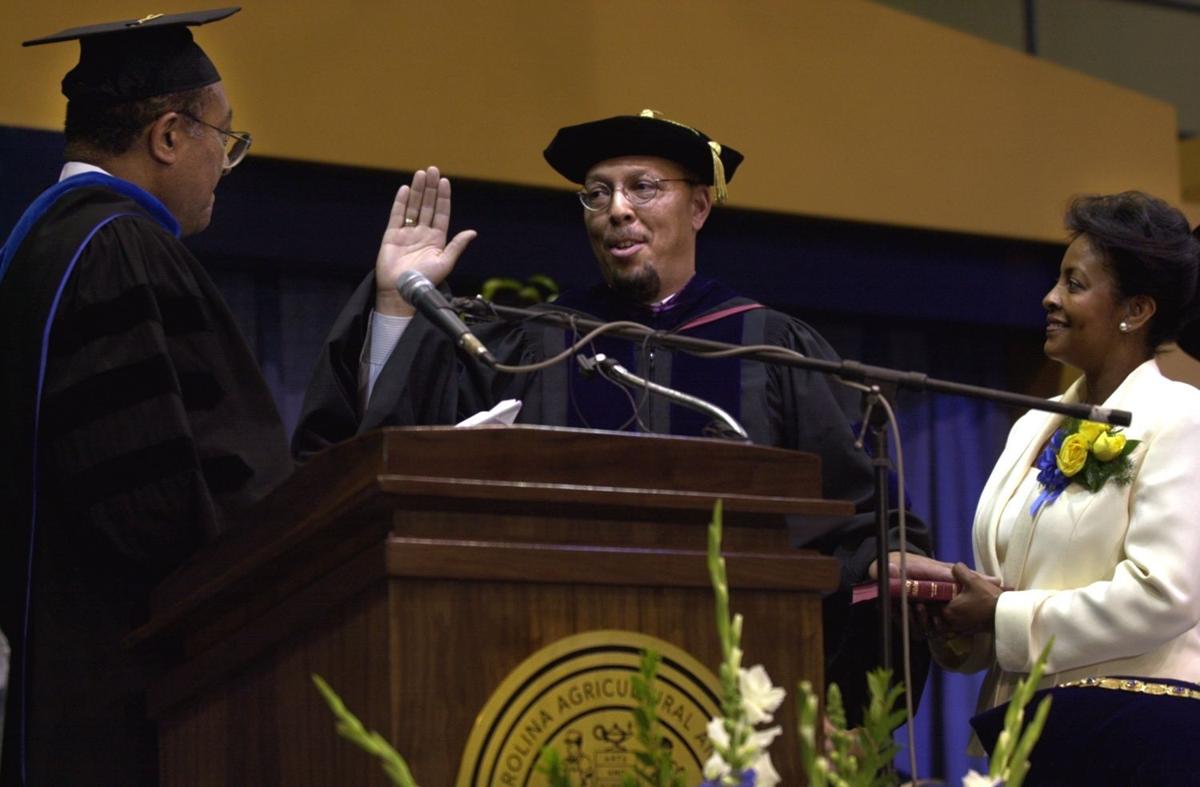 GREENSBORO — James C. Renick, who as chancellor guided N.C. A&T through a seven-year period of tremendous growth, has died a month after his 72nd birthday.

Renick had suffered from amyotrophic lateral sclerosis, or ALS, and died Sunday, according to a Facebook post by his daughter.

"Today I had to say goodbye to a great man, my dad," Karinda Renick wrote Sunday. "I am completely heartbroken."

She had posted earlier on Facebook that her father had been severely ill since late 2019. James Renick was later diagnosed with ALS, also known as Lou Gehrig's disease for the famous baseball player it afflicted, and had been in rapidly declining health ever since. ALS is an incurable disease that affects nerve cells in the brain and spinal cord and causes people to lose control over the muscles they need to speak, eat and breathe.

Renick served as A&T's ninth chancellor from 1999 to 2006 but saw his legacy tarnished when financial issues came to light after he left.

During his tenure, A&T expanded its campus footprint, adding several significant new buildings and saw its student population balloon by nearly 50%. The university also gained doctoral status in 2004 — something that only a few historically Black colleges and universities like A&T had achieved before or since. Renick at the time called the designation a “major milestone” in A&T's history.

"Chancellor Renick will be remembered as an impactful leader of the university and an educational professional with a heart for students," current Chancellor Harold Martin wrote in a message Monday to A&T students and employees. "Our thoughts and prayers are with the Renick family as they grieve a husband and father."

James Carmichael Renick grew up in Rockford, Ill., with his mother, sister and grandmother. His father, who taught at a Georgia university, died before Jimmy Renick reached his first birthday, according to a 1999 News & Record profile. He took "Carmichael" as his middle name after his maternal grandmother died in 1977.

In the summer, according to the story, young Jimmy mowed lawns. In the winter, he shoveled snow. He told a News & Record reporter he could clear a driveway in 15 minutes — 10 if a buddy helped out.

"I can remember going home with pockets full of change and my grandmother asking, 'Where'd you get all that?' Well, I worked for it," Renick said in 1999.

Renick got his bachelor's degree in 1970 from Central State University in Ohio, a school his only daughter later attended. Renick later got a master's degree in social work from the University of Kansas.

Renick moved to Pensacola, Fla., where he worked at a community mental health center and taught social work classes at the University of West Florida. That's where he met his wife, Peggy, who was a student there. He also earned his doctorate in government and public administration from Florida State University.

He left West Florida after six years to become an associate professor of public administration at the University of South Florida in Tampa. During his eight years there Renick moved into the administrative ranks. In 1989, he became associate provost and program director at George Mason University in northern Virginia. He was promoted to vice provost for academic initiatives and external affairs two years later.

In 1993, Renick was named chancellor of University of Michigan-Dearborn, a state university near Detroit. The university system president at the time called Renick "a young, bright and energetic leader."

After six years in Michigan, Renick came to Greensboro in the summer of 1999 to replace Edward Fort, who had stepped down as A&T's chancellor after nearly two decades. Renick called A&T the fulfillment of a lifelong dream to lead an historically Black institution.

"Our key to invigorating innovation is keeping our focus on our students," Renick said during his installation ceremony in 2000. "Ultimately we want to nourish the spirit that marks North Carolina A&T as the university that enriches the lives of its students and adds value to the quality of life in North Carolina and the nation.”

Renick's seven years in Greensboro were a whirlwind. The charismatic new chancellor helped put in place much of what current Aggies see around campus today.

The university used proceeds from a statewide bond issue to build a slew of new buildings, including a new science facility, the Alumni-Foundation Event Center, the Academic Classroom Building and Craig Hall, home of A&T's business school. A&T cleared space on the east side of campus for a pair of residence halls and tore down Scott Hall in 2004 to make room for the Aggie Village dorm complex. A&T also added onto its former student center, upgraded campus infrastructure and renovated several academic buildings, residence halls and the cafeteria.

Renick seemed particularly proud of the campus expansion, especially because it eliminated more than 80 old homes in and around the university. A News & Record photograph from 2002 shows him behind the controls of a bulldozer as he knocks down some of those houses. The photo shows him wearing a hard hat that reads "Chancellor" and holding a fist triumphantly overhead.

Also during Renick's tenure: The university added new academic programs in engineering, business counseling and other areas as well as doctoral programs in leadership studies and energy and environmental studies. A&T joined forces with UNCG to start planning a shared new campus that opened as the Joint School of Nanoscience and Nanoengineering in 2010.

In 2000, A&T awarded its first Human Rights Medal, which it presents annually to a courageous person who has fought against social injustice. Two years later, A&T unveiled the February One Monument on campus to commemorate the four A&T freshmen who launched the lunch counter sit-in movement in downtown Greensboro.

Renick raised money. Early in his tenure he attracted a $3 million donation from the Ford Motor Co., which at the time was the largest corporate gift ever given to A&T. Most of the money went to student scholarships and to install lights on A&T's football stadium. He later launched a $100 million fundraising campaign.

As the campus grew, so, too, did the student body. Enrollment increased every fall while Renick was there, from 7,600 students when he arrived to a high-water mark of 11,100 students in Renick's final fall term. A&T wouldn't reach that number again until 2016.

His supporters hailed him as a visionary. Renick preferred the term caretaker.

“I looked at my role as someone who would be a good steward of the institution and add value and try to contribute in meaningful ways,” Renick said in 2006, shortly before he left for a new job in Washington, D.C.

But Renick stumbled at times.

The $100 million fundraising campaign fell short of its goal.

Renick announced that A&T might jump to Division I-A in football — the highest level of competition — but quickly abandoned those plans when it became clear the university didn't have the money to make the move.

A 2007 audit commissioned by Lloyd V. Hackley, the chancellor who succeeded Renick, found that A&T improperly transferred $380,000 in campus vending receipts to a discretionary fund controlled by Renick. The audit said that, instead of using the fund for scholarships and student activities, Renick spent a portion of it to buy art and to pay for his wife to accompany him on university business trips.

The Guilford County district attorney ultimately declined to press charges because no laws appeared to have been broken.

Hackley also uncovered a long list of other concerns, according to News & Record reports published at the time. Among them: A quarter of undergraduates were on academic probation or suspension during Renick's final semester on campus. Nursing school graduates struggled to pass licensing exams. And a team of UNC System officials called in to untangle A&T's financial records discovered issues with overspending, oversight and misappropriation.

This accumulation of problems led the News & Record's editorial page to declare in early 2007 that there was "an unexpected shadow on Renick's legacy."

Renick said at the time that annual audits during his tenure "found no serious financial irregularities."

Renick left A&T to become senior vice president at the American Council on Education, the coordinating body for more than 1,700 U.S. colleges and universities. He later served as an adviser to the president of Central State, his alma mater.

In 2011, he became an adviser to Jackson State University's president, Carolyn Meyers, who had been Renick's provost at A&T. Renick was later named interim provost and then provost, the institution's second-ranking position, before resigning from the Mississippi university in 2015.

Information on funeral and memorial services was unavailable Monday.

Under the leadership of Dr. James C. Renick, N.C. A&T saw significant enrollment, facility and infrastructure growth. He was known to spend significant time engaging with students. Our sincere condolences go out to his family, friends and the educational communities he impacted. pic.twitter.com/cBh5GcMxjQ

It's with sadness that we share that former Chancellor James C. Renick has passed.

Sending prayers to his family and loved ones during this difficult time. 🙏🏾 pic.twitter.com/p8HWPyt1EB

Under the leadership of Dr. James C. Renick, N.C. A&T saw significant enrollment, facility and infrastructure growth. He was known to spend significant time engaging with students. Our sincere condolences go out to his family, friends and the educational communities he impacted. pic.twitter.com/cBh5GcMxjQ

The Syllabus: A quick tribute to the late James Renick from a former N.C. A&T chancellor

The Syllabus: What N.C. A&T plans to do with part of its $45 million windfall

The spring semester will start Jan. 19 as scheduled. Undergraduate classes will be online-only through Feb. 8.

James Renick was A&T's ninth chancellor. He led the Greensboro university through a period of tremendous growth from 1999 to 2006.

The money comes from $4.1 billion in donations to organizations across the country announced Tuesday by philanthropist MacKenzie Scott.

The Syllabus: Could N.C. A&T become an R1 university?

The Greensboro university is exploring the possibility.

N.C. A&T will use a new $5 million grant to help its business and engineering students

The grant from Walmart is the largest corporate donation in the university's history.

N.C. A&T State University's chancellor James Renick applauds during a press conference at the school to announce the hiring of football coach Lee Fobbs in 2005.

James C. Renick held a news conference in the Dowdy Building on the N.C. A&T State University campus in 2006 to announced his would resign from his post. Renick served as chancellor and professor of political science since July 1999.

N.C. A&T chancellor James C. Renick cheers the football team as it comes onto the field for a homecoming game against Morgan State University in 2004.