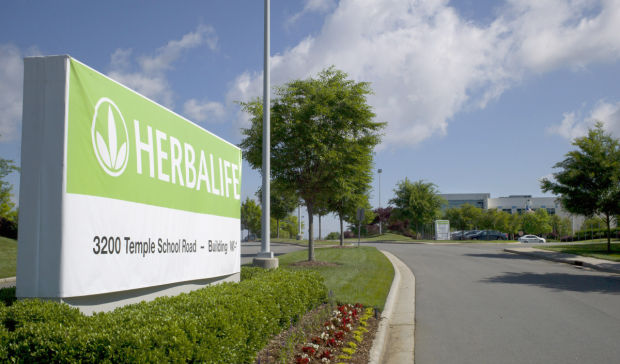 A renovation project set to begin later this month at the Herbalife plant will cost an estimated $50 million, including tens of millions of dollars of equipment. 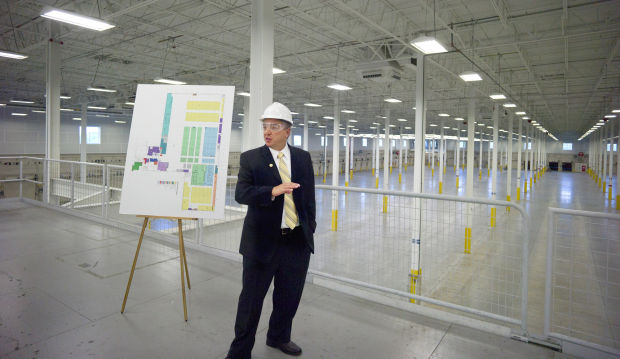 Dave Pezzullo, Executive VP for Worldwide Operations of Herbalife, standing on the mezzanine looking over the cavernous space once occupied by Dell.

The emptiness of the massive plant once occupied by Dell Inc. – at 750,000 square feet – was stunning to behold, particularly for those having a before-after-and-before-again perspective.

Herbalife Ltd. officials, led by chief operating officer Richard Goudis, provided a media tour of the production floor Tuesday as part of an overall update of the company’s renovation and hiring plans for the facility on Temple School Road. They also provided a virtual 3D video presentation of how the $130 million plant would be transformed.

Herbalife sells its nutrition and weight-loss products through a global network of distributors, with net sales of $4.1 billion in 2012.

The company is accelerating its hiring plans to 250 full-time workers by year’s end and 500 by the time the plant reaches full production of its powders, teas and liquids in July 2014. The initial pledge was creating the jobs within three years.

Their update was welcome news to a community eager for another manufacturing shot-in-the-arm.

But on this day, both floors of production space remained barren, as they have been since Dell ceased operations in November 2010 and shipped tens of millions of dollars of assembly, sorting and packaging equipment to third-party suppliers outside the country, such as Foxconn in Mexico.

It served as a lesson in Economics 101, in that capitalism can be a creator and a destroyer of jobs, and technology has only accelerated that dynamic.

Only a few construction workers were visible in the plant last week. They were measuring the groundwork for a renovation project set to begin later this month at an estimated cost of $50 million, including tens of millions of dollars of equipment.

At first glance, the size of the Dell plant appeared daunting enough to Herbalife officials that it bordered on becoming a deal-breaker for their plans.

Competition, in the form of build-from-scratch sites north of Atlanta, was projected to offer plants at 350,000 square feet. That was more along the line of what Herbalife officials envisioned as the East Coast companion to its plant in Lake Forest, Calif.

However, being able to buy the Dell plant for $22.2 million – essentially 20 cents on the dollar for the $110 million Dell spent – convinced Herbalife officials the local facility was too good of an offer to pass up since they did have expansion in mind.

“Our Lake Forest facility would take up about a fourth of the space here,” Pezzullo said. “We’ve learning lessons from Lake Forest in how we put this plant together.”

Still, Goudis said the quality of the production at the Lake Forest facility gave the board of directors confidence “that it can be replicated and improved here. We're confident that goal is reachable and will benefit the company as whole.”

Goudis understands that Herbalife is riding a fine line between not overpromising the plant’s revenue impact to the company’s business, while also recognizing the quicker the plant begins operations, the faster it can capture growing domestic and international demand for its products.

Goudis emphasized Tuesday, as officials have since they settled on the Winston-Salem site in December, that “as long as there is a global obesity epidemic, our products will be around and this plant will be around.”

“Our products are uniquely positioned to take advantage of that.”

There are some important differences in the international market, however. In Mexico, for example, people tend to buy the product in bulk and use it for daily nutrition rather than weight management.

Herbalife also is expanding the reach of its life-coaching efforts in some markets, since “most people need coaching to lose weight,” particularly if they are surrounded by a sedentary lifestyle.

The company has begun research and development work locally that is complementary to what is done in Lake Forest.

Another element where Herbalife could have ripple effects beyond Winston-Salem is through its “seed to feed” program that is driving its environmental sustainability initiative.

Goudis said Herbalife takes an active role in finding farmers who can meet its ingredient quality and farm safety requirements, particularly those close to its processing plants.

“This acquisition is part of vertically integrating our supply chain to give us even greater control of our products at every stage of the process and increasing our ability to meet the increased product needs of our independent distributors and their customers around the world,” Goudis said.

While company officials were in town, they took a side trip Monday to Kannapolis and the N.C. Research Campus, which has a significant biotechnology focus on nutrition.

For example, The Charlotte Observer recently reported on the campus’ Plants for Human Health Institute, which is run by a branch of N.C. State University. Institute researchers are developing ingredients that, when combined with high-protein flours, can be made into smoothies, power bars and other nutritious snacks for military personnel in the field.

Goudis said he came away intrigued by the potential for collaborative projects with university researchers at the Kannapolis campus. N.C. Research Campus officials could not be reached for comment about potential projects with Herbalife.

Julian Cacchioli, Herbalife’s vice president of corporate communications, expanded on the company’s plans to be involved in local community and charitable initiatives.

Among the examples he cited of Herbalife partnerships in other areas: groups that take care of vulnerable children, emphasize nutritional education, and having officials serve on local nonprofit boards of directors, such as American Red Cross and YMCA.

He said employees are given 16 hours of volunteer time each year, and the company has foundations that provide grants and supplies of its nutritional products.

Because of the company’s expanding sports-marketing efforts, Cacchioli said the company already has been approached by local youth sports groups, as well as groups involved in running and cycling. He said the company was excited to learn about Winston-Salem’s growth as a cycling hub.

Goudis said the company is moving quickly on such community efforts “because we don’t want to miss out on opportunities since some efforts have to be planned out a year ahead.”

“We believe our contributions, as an employer and to the local community, will speak for itself at the end of the day,” Goudis said.

The Food and Drug Administration announced Thursday that Juul Labs Inc. is required to remove all electronic cigarette products from U.S. shelves.

The N.C. Transportation Department has paid a combined $2.58 million to buy three tracts along the path of the Northern Beltway, according to …

The historic Lasater mill house in Clemmons has sold for $1.75 million to a Clemmons group, according to a Forsyth County Register of Deeds fi…

Novant Health Inc. is looking westward for its next North Carolina expansion market, hoping to establish a fourth urban hub in the state.

A Winston-Salem industrial plant with Collins Aerospace as its tenant has been sold for $11.4 million to a New York City group, according to a…

Two Davidson County-focused bills cleared the General Assembly on Wednesday, though with opposition citing concerns about the usurping of loca…

A renovation project set to begin later this month at the Herbalife plant will cost an estimated $50 million, including tens of millions of dollars of equipment.

Dave Pezzullo, Executive VP for Worldwide Operations of Herbalife, standing on the mezzanine looking over the cavernous space once occupied by Dell.