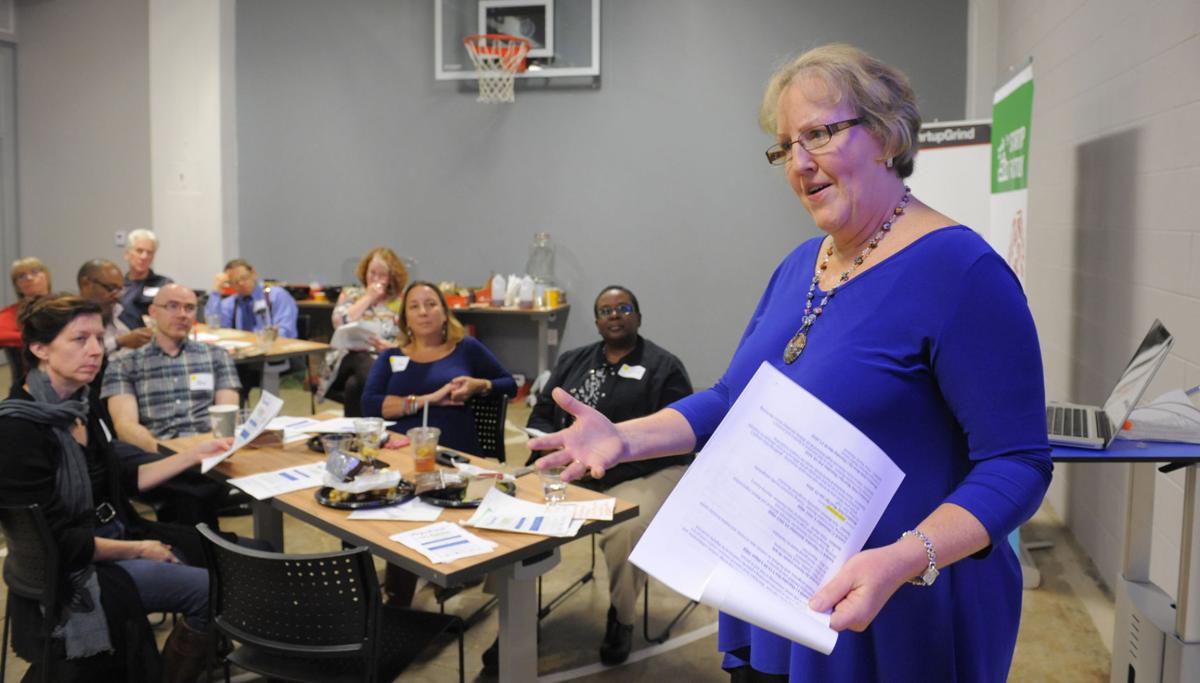 Margaret Collins, executive director of The Center for Creative Economy, presents the benefits of Swerve membership Thursday during the group’s launch meeting at the meeting space of Flywheel in Winston-Salem. 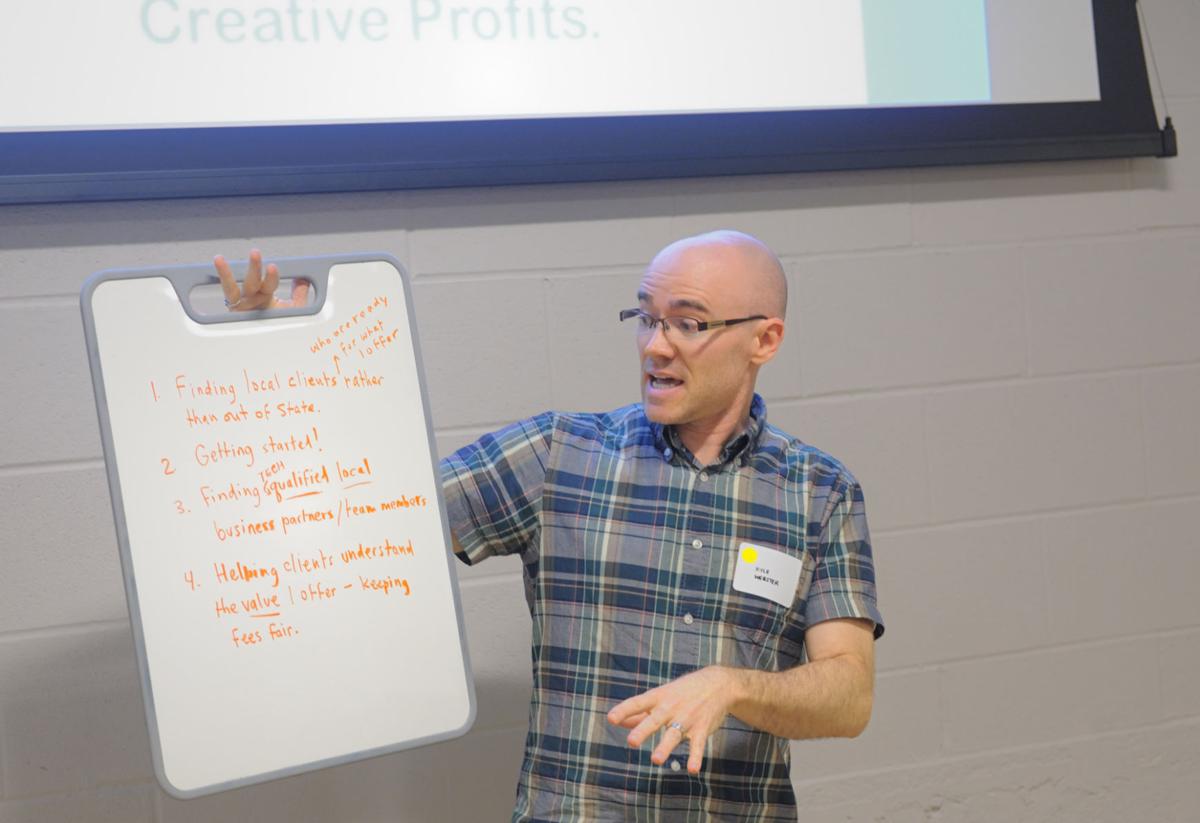 Kyle Webster, illustrator & artist and a member of The Center of Creative Economy’s Swerve group discusses the results of his table’s insight to the challenges of being a creative during the group’s launch meeting. 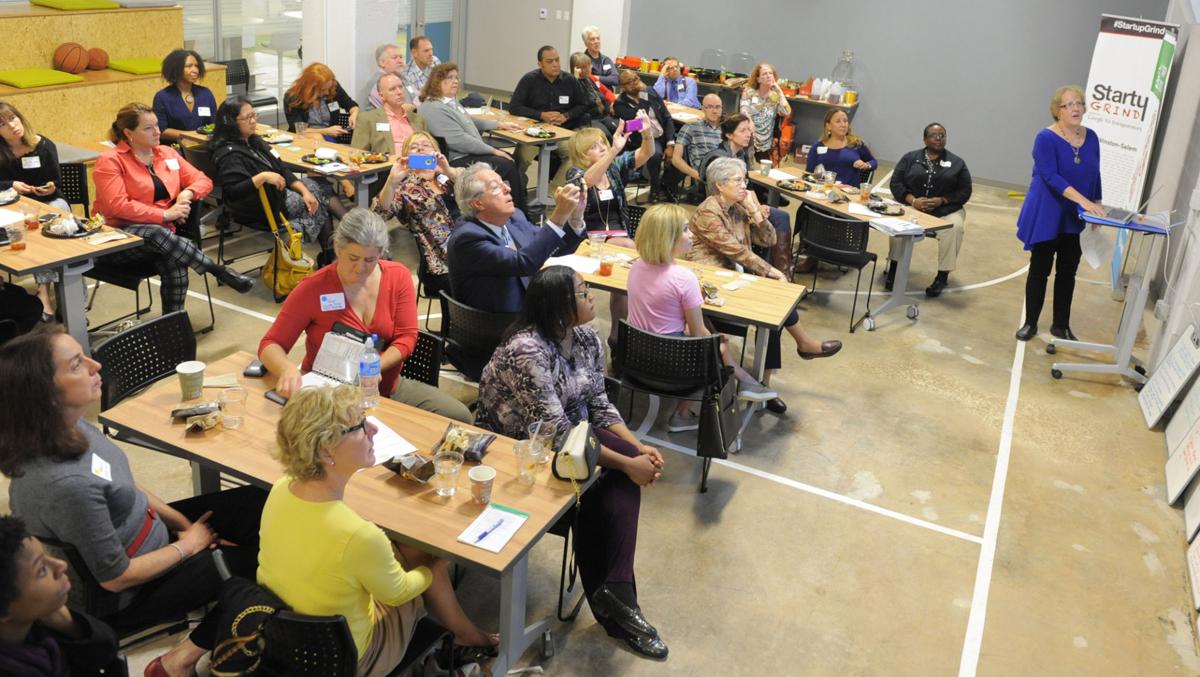 Members of The Center of Creative Economy’s Swerve group listen as Margaret Collins presents the benefits of Swerve membership during the group’s launch meeting at the meeting space of Flywheel in Winston-Salem on Thursday.

The Center for Creative Economy introduced on Thursday its new Swerve program developed specifically for the creative industries.

About 60 people, including entrepreneurs and professionals from a variety of fields, including furniture, glass, marketing, graphic design, jewelry, dance and art attended a free luncheon and presentation on the program at Flywheel in Wake Forest Innovation Quarter.

Margaret Collins, the executive director of The Center for Creative Economy, describes Swerve as “the hub to connect our creative industries through content, collaboration and networking.”

The aim of the Swerve project is to invest in retaining, attracting and growing creative businesses and impacting the local economy. Through monthly member gatherings, Swerve will connect creative industries online and in person, providing opportunities for its members to engage with successful creative entrepreneurs.

“We going to bring people together to connect and help them grow their businesses,” Collins said in an interview after the event. “It’s all about growing the businesses.”

Collins said that creative people in the Triad community have been asking for a program that provides better connectivity online and in person to start and grow businesses.

Collins is a musician and former artist manager who has worked in markets such as New York, Washington, D.C. and Atlanta. The Center for Creative Economy is a nonprofit organization focused on being a catalyst for innovation and an advocate for creative industries and entrepreneurs, promoting connectivity and job growth.

The goal is to create a Swerve member base, host monthly meetings, and provide specialized programming to help individuals, startups, mid-level and mature creative businesses.

“The meet-ups will provide forums for members to discuss the presentations together, and explore how to apply the information to their business,” Collins said in a statement.

Swerve, which has a micro site through www.centerforcreativeeconomy.com, will offer an online creative directory, a series of feature articles and tips through the Swerve blog, website and social media channels. The www.SwerveTriad.com site is expected to go fully live next week.

Swerve offers various levels of membership fees, ranging from $49 a year for students to $249 a year for a business (up to three members).

Fees can also be paid monthly and for six months. There is also a job posting member fee (view creative directory and post jobs) of $129 a year.

People who attended the event on Thursday were given the opportunity to write down and talk about challenges facing their creative businesses and tell the group what they need to solve them.

Collins said that the information provided by all event attendees will be used to create future Swerve programs.

Emmy Williams, chairwoman of the Center for Creative Economy’s board and owner of Interior Solutions, was pleased with the turnout for the event.

“It’s both new businesses as well as established businesses that are here with us,” Williams said.

Several people talked about the need for Swerve.

Jacqui Haggerty, owner of Paper Bridge Media & Production, based in Greensboro, said she wants to work with businesses in Winston-Salem.

“I recently learned that the creative community in Winston is very inspiring, and I’d like to be a part of that,” Haggerty said. “It’s nice to know that Swerve will help facilitate that.”

Deborah Klaus, the owner of Deb the Copywriter, moved to Winston-Salem about 14 years ago.

“The big thing that has been lacking from my point of view has been a cohesive, creative community, so I think Swerve has the potential to be a really big deal for Winston — the arts city.”

Will Spivey, president of Maxcom, a management consulting company in Winston-Salem, is a founding board member of the Center for Creative Economy.

Spivey said that while he is not on the organization’s current board and wasn’t active in the Swerve project, “the platform that’s been built absolutely exceeds my expectations of what I thought it was going to be. I think they’ve done a really great job of creating the content that’s needed to make it a good value to join.”

What: Swerve, a program of the Center for Creative Economy for the creative industries.

Flywheel offer: Sign up as a community member for a year ($50 a month) and Flywheel will pay your Swerve membership. Flywheel is one of Swerve’s eight strategic partners.

R.J. Reynolds Tobacco Co. is expected to implement soon its third 14-cent per pack increase of 2021 for most of its key traditional cigarette brands.

An affiliate of D.R. Horton Inc. has paid $4.46 million for a combined 47.13 acres in Kernersville, according to a county Register of Deeds fi…

Here's what you should know if you're planning on purchasing an electric vehicle in the near future. Also, check out more of the week's best money tips from experts.

Margaret Collins, executive director of The Center for Creative Economy, presents the benefits of Swerve membership Thursday during the group’s launch meeting at the meeting space of Flywheel in Winston-Salem.

Kyle Webster, illustrator & artist and a member of The Center of Creative Economy’s Swerve group discusses the results of his table’s insight to the challenges of being a creative during the group’s launch meeting.

Members of The Center of Creative Economy’s Swerve group listen as Margaret Collins presents the benefits of Swerve membership during the group’s launch meeting at the meeting space of Flywheel in Winston-Salem on Thursday.