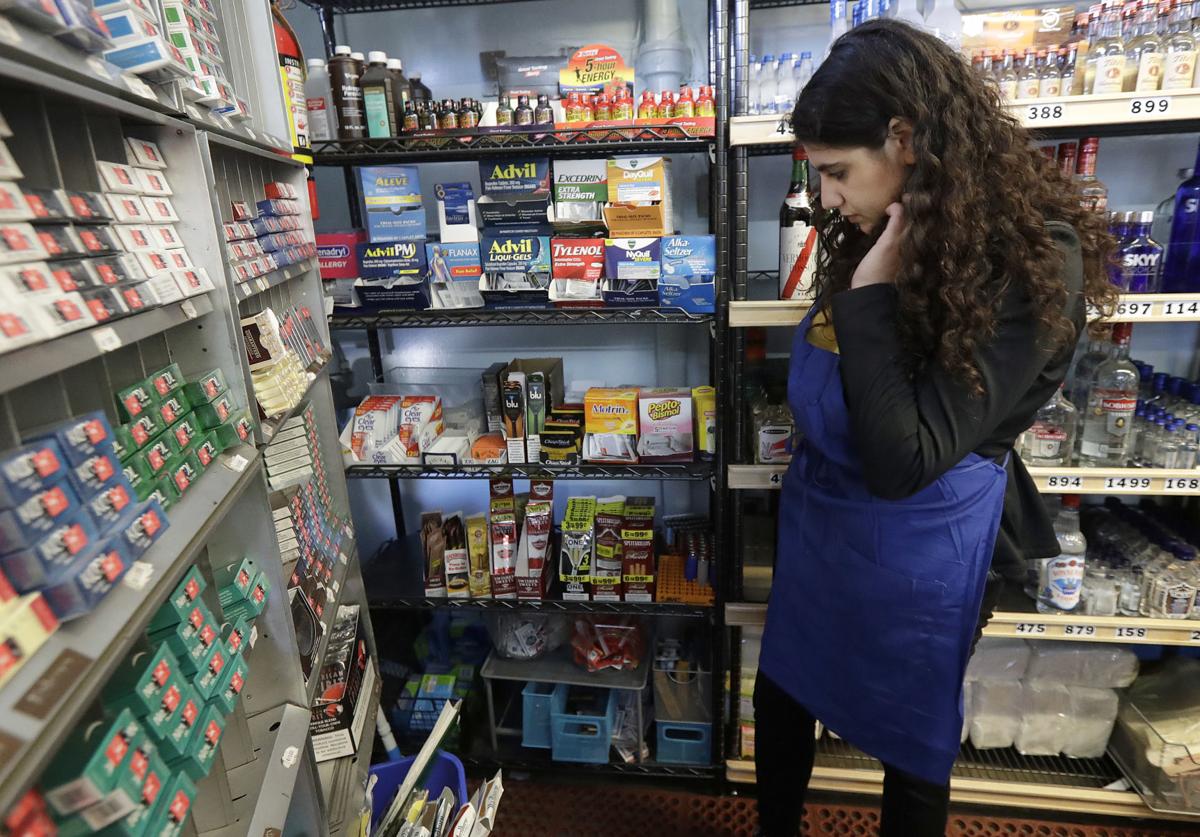 Miriam Zouzounis looks through a selection of tobacco products while interviewed at Ted’s Market, her family’s store, in San Francisco. R.J. Reynolds Tobacco Co. is pumping millions of dollars into a campaign to persuade San Francisco voters to reject a ban on selling flavored tobacco products, including menthol cigarettes and vaping liquids with flavors like cotton candy, mango and cool cucumber. Zouzounis, a board member of the Arab American Grocers Association, which represents 400 small-business owners in the San Francisco Bay Area, said the ban would remove an anchor product that attracts customers, many of which are immigrant-owned. 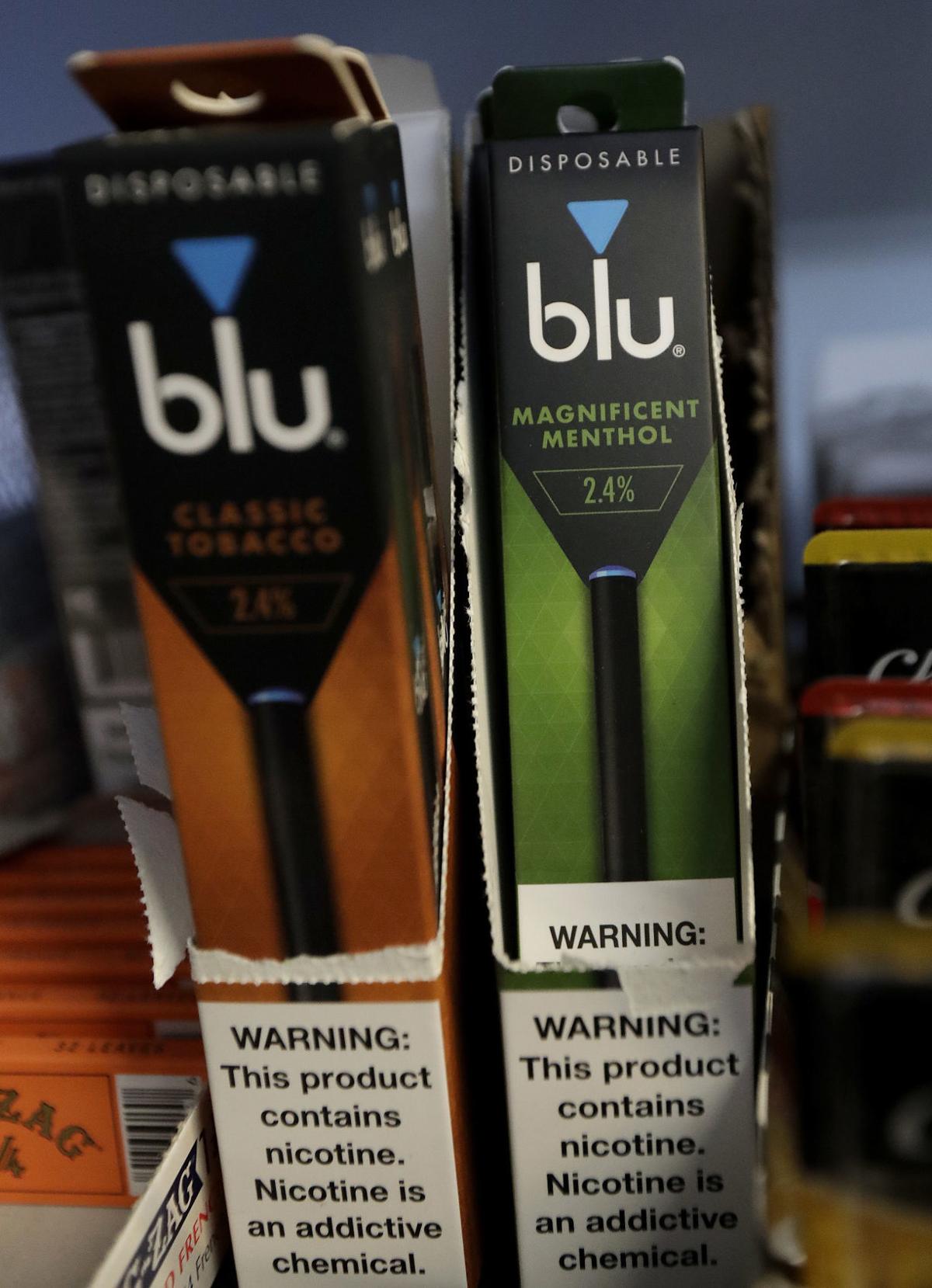 This May 17, 2018 photo shows packs of blu menthol electronic cigarettes displayed with other tobacco products at Ted’s Market in San Francisco. R.J. Reynolds Tobacco Co. is pumping millions of dollars into a campaign to persuade San Francisco voters to reject a ban on selling on flavored tobacco products, including menthol cigarettes and vaping liquids with flavors like cotton candy, mango and cool cucumber.

The future of menthol traditional cigarettes and other flavored tobacco products became murkier last week with San Francisco voters overwhelmingly upholding a city ordinance that bans the sale of those products.

It’s uncertain how far-reaching the ripple effect could be nationwide.

Menthol styles, which are mint-flavored, have been controversial for decades because they are considered a smoother way to smoke traditional cigarettes and because of their specific appeal to minority consumers. Menthol represents about 35 percent of traditional cigarette sales.

The San Francisco ban also affects flavored electronic cigarettes and other innovative tobacco products, including those by small manufacturers that use candy, fruit and other liquid nicotine flavorings.

Anti-tobacco supporters say those products are designed to appeal to youths, while anti-smoking advocates say some of those flavorings are playing a role in weaning adults off traditional cigarettes.

Ban supporters are hopeful that the San Francisco vote will put pressure on the Food and Drug Administration to accelerate the pace of its formal review of what role menthol products play in young people’s use of those products. That review began March 20, with the first step a 90-day public-comment period.

The FDA made it clear in July it will try to limit, if not eliminate, flavorings in tobacco products even as it takes a more conservative approach on other regulatory goals.

The FDA has the authority to take such a step, but Commissioner Scott Gottlieb said in August the agency chose to defer a decision from 2018 to 2022.

In April, a group of 11 Democratic U.S. senators applied pressure to Juul Labs Inc., the top-selling electronic cigarette maker, and the FDA to tighten marketing of the products, including banning “kid-friendly candy and fruit flavorings that are used with e-cigarettes and cigars.”

Over the past two years, California voters approved sharply increasing the tobacco excise tax, including $2 per cigarette pack to $2.87. The tax became the ninth highest in the country. California also became the second state to raise the minimum age for consuming most tobacco products to 21.

Although only 12 percent of Californians are smokers, they represent 8.5 percent of the U.S. cigarette volume — the second largest of any state, behind Texas.

Bonnie Herzog, an analyst with Wells Fargo Securities, said she does not expect the San Francisco ban to be a “deal-breaker for the menthol category.”

“We believe the net negative impact for major tobacco manufacturers will be limited since we expect many consumers will likely move their purchases online or cross border, ultimately having the greatest negative impact on retailers,” Herzog said.

Other industry officials cautioned that some San Francisco smokers will turn to what are known as after-market flavor options, where a few drops of menthol and a zip-lock bag can produce menthol cigarettes and smokeless tobacco products overnight.

In 2009, Congress exempted menthol from banned flavorings in traditional cigarettes in the federal Tobacco Control Act.

“When it comes to flavors in non-combustible products, such as electronic nicotine delivery systems, we recognize the issue involves additional considerations,” Gottlieb said when introducing a regulatory road map in July 2017.

“Here, it’s possible for flavors to do both harm and good,” Gottlieb said.

Advocates and public-health officials have argued that without menthol, many smokers would choose not to smoke a tobacco-flavored product and quit.

Matt Myers, president of the Campaign for Tobacco-Free Kids, said the San Francisco ban “will stop the tobacco industry from targeting kids, African Americans and other populations with menthol- and candy-flavored products, as the industry has done for far too long.”

“The vote gives a powerful boost to growing efforts around the country to end the sale of flavored tobacco products.”

Herzog said she does not believe the San Francisco ban, by itself, will create “a bigger potential risk for a menthol ban to be enacted at the federal level.”

Herzog said that any FDA ban would have to be “science based and must consider unintended consequences.”

Menthol’s popularity with smokers led Reynolds American Inc. to spend $29.25 billion in June 2015 to acquire Newport from Lorillard Inc., based in Greensboro.

Gaining access to Newport, both domestically and potentially globally, was a major factor in British American Tobacco PLC spending $54.5 billion in July 2017 to acquire the 57.8 percent ownership stake of Reynolds that it didn’t already own.

Meanwhile, former New York Mayor Michael Bloomberg described the vote to uphold the ban as “showing that the tobacco industry, no matter how much money it spends on misleading ads, can be defeated.”

R.J. Reynolds Tobacco Co. spent nearly $12 million on its attempt to overturn the ordinance, while Bloomberg, who is a billionaire, led the pro-ban supporters by contributing $2 million of the $2.8 million raised.

“This vote should embolden other cities and states to act because it demonstrates the public will not allow tobacco companies to stand in the way of policies that are proven to reduce smoking and save lives,” Bloomberg said.

Herzog said that “only a small handful of local jurisdictions have enacted, or are drafting legislation, to restrict menthol cigarette sales.”

“Retailers in general believe that menthol bans in more cities would be negative for the category given menthol’s relative size,” Herzog said.

“Our view is that absent a comprehensive ban at the federal level, we would expect very limited smoker attrition and volume pressure, resulting in a very manageable risk for tobacco manufacturers.”

Reynolds said in a statement that the outcome “is a setback for tobacco harm reduction efforts because it removes from the market many potentially reduced-risk alternatives to cigarettes that smokers have said are important in helping them switch.

“History has shown regulations that go to extremes to limit consumer choice result in unintended consequences, including criminal activity,” the statement said.

“We will continue to encourage Food and Drug Administration to conduct a thorough scientific review that will lead to effective regulations aimed at preventing youth access to tobacco products, but preserving choice for adult smokers who are looking for alternatives to help them switch from cigarettes,” Reynolds said.

Dr. John Spangler, professor of family and community medicine at Wake Forest Baptist Medical Center, said “perhaps the best way (for FDA) to strike this balance is to reduce the total number of flavors, particularly those most appealing to adolescents.”

Scott Ballin, past chairman of the anti-smoking alliance Coalition of Science or Health, said San Francisco residents could be negatively affected in two ways by the ban.

“First, addicted smokers will be deprived of ‘consumer acceptable’ lower-risk products that would have potentially helped them give up deadly cigarettes,” Ballin said.

“Second, this will discourage further innovation and investments in the development of newer FDA-regulated lower-risk products, giving addicted smokers few options except to continue to use deadly cigarettes.”

David Sweanor, an adjunct law professor at the University of Ottawa, used a soccer term to discuss how the San Francisco ban negatively affects both sides of the issue.

“Both the anti-tobacco movement and the tobacco industry tend to score own-goals. This is a rare example of it happening simultaneously,” said Sweanor, an author of several electronic-cigarette studies and other issues addressing tobacco and health.

“The anti-tobacco campaigners pushed an absolutist agenda on all nicotine products.

“The result is that they have just made it far less likely that smokers will switch to massively less hazardous alternatives such as vaping and smokeless tobacco since these products rely on flavors to entice smokers to switch.”

Meanwhile, Sweanor said “Reynolds managed to turn the campaign into an unwinnable referendum on their public image rather than on rational health policy.”

“They have thus greatly assisted their arch-rival Altria, which is far less dependent on menthol cigarettes.”

The Edge Flats apartment complex near downtown Winston-Salem has been sold for the second time in 5½ years, this time to a national real-estat…

A Pennsylvania residential company that caters to college student housing has spent $15.5 million to purchase the Cottages at Greensboro compl…

The City Fitness property in Lexington has been sold for $1.03 million to a Lexington group, according to a Davidson County Register of Deeds …

North Carolina has surpassed 8,000 COVID-19 related deaths for the pandemic, while Forsyth County nears 25,000 cases, according to Sunday's re…

Federal unemployment benefit payments are resuming in North Carolina, including the temporary restart of the primary funding program that Cong…

Miriam Zouzounis looks through a selection of tobacco products while interviewed at Ted’s Market, her family’s store, in San Francisco. R.J. Reynolds Tobacco Co. is pumping millions of dollars into a campaign to persuade San Francisco voters to reject a ban on selling flavored tobacco products, including menthol cigarettes and vaping liquids with flavors like cotton candy, mango and cool cucumber. Zouzounis, a board member of the Arab American Grocers Association, which represents 400 small-business owners in the San Francisco Bay Area, said the ban would remove an anchor product that attracts customers, many of which are immigrant-owned.

This May 17, 2018 photo shows packs of blu menthol electronic cigarettes displayed with other tobacco products at Ted’s Market in San Francisco. R.J. Reynolds Tobacco Co. is pumping millions of dollars into a campaign to persuade San Francisco voters to reject a ban on selling on flavored tobacco products, including menthol cigarettes and vaping liquids with flavors like cotton candy, mango and cool cucumber.