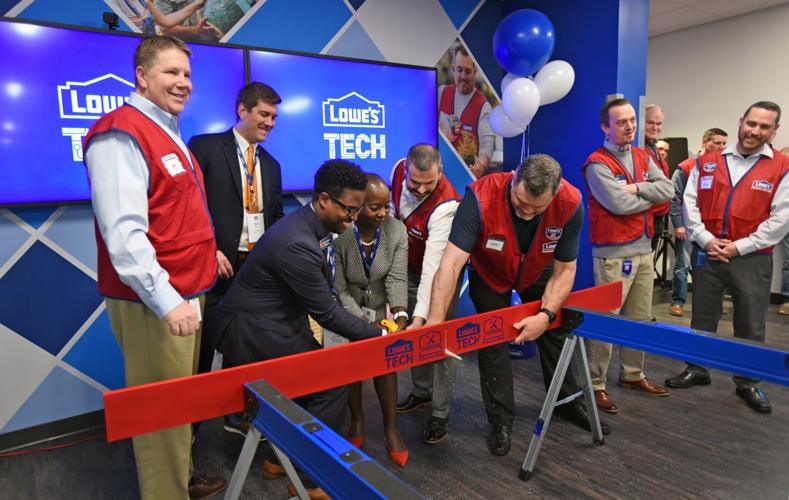 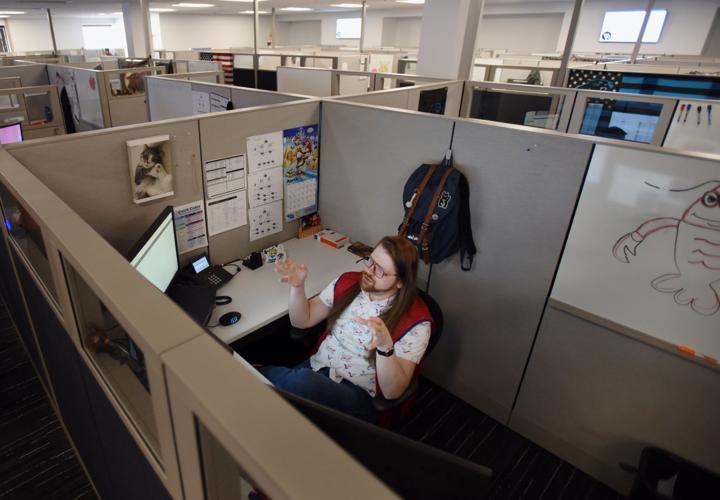 T.J. Graley helps answer a technology issue at Lowe’s IT Service Desk. The local workforce is part of an overall hiring initiative launched in December 2018 to add up to 2,000 IT employees. 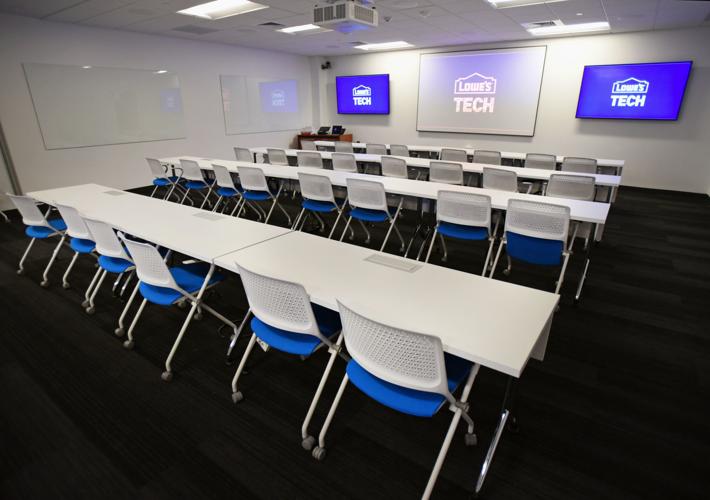 Lowe’s IT Service Desk features a disaster-relief room where the company can monitor and assist stores trying to keep IT functions going before, during and after a natural disaster. 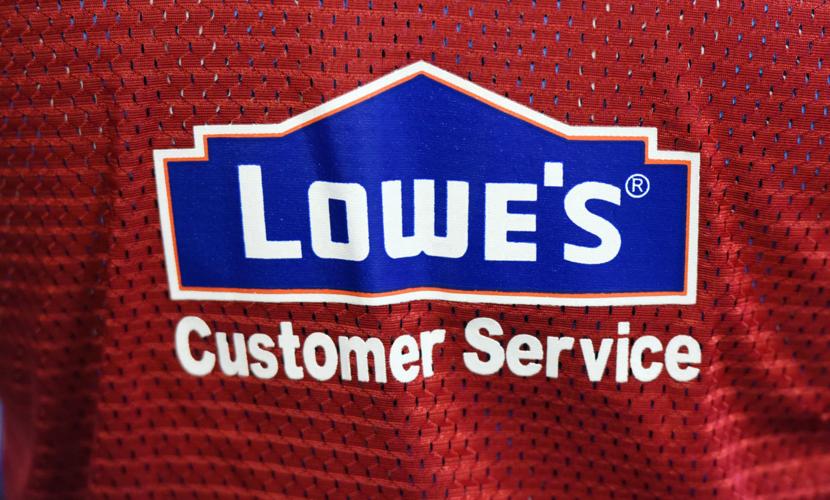 All Lowe’s employees wore the signature red vest at the Lowe’s IT Service Desk during the tour event. 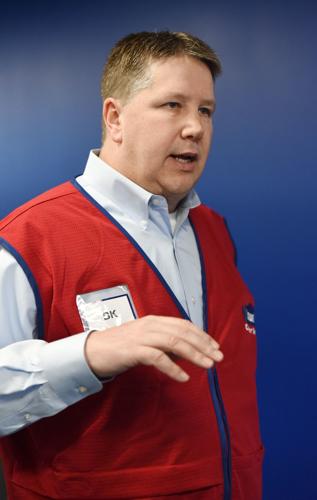 Lowe’s Cos. Inc.’s constant search for information-technology employees has led it to expand a mission-critical niche office in Winston-Salem.

The company moved into a 27,000-square-foot space at 5644 University Parkway in January that gives it ample room for the dozens of jobs it shifted recently from corporate operations functions in Wilkesboro. A grand-opening event was held last week.

The $100 million data center in Corporate Office Park now has a separate IT service desk workforce of 110 with plans to hire an additional 20 full-time and contract workers as soon as feasible. Hiring information can be found at Jobs.lowes.com/technology.

The center debuted in 2005 with 25 employees, receiving about $3.8 million in local and state incentives for that project.

The service desk serves as an information-control facility, providing remote service support “as the first point of contact” for employees on point-of-sale retail equipment at all 1,977 stores, as well as supply-chain facilities and store support centers.

It features a disaster-relief room where the company can monitor and assist stores trying to keep IT functions going before, during and after a natural disaster.

B.K. Shepard, Lowe’s vice president of technology and operations, said the local service desk represents an upgrade in terms of equipment and talent.

The center represents a middle ground in terms of skills and wages among those in Wilkesboro, its headquarters in Mooresville and the $153 million, 23-story technology center under construction in Charlotte’s South End that would have 1,612 employees when it opens in late 2021.

The local workforce is part of an overall hiring initiative launched in December 2018 to add up to 2,000 IT employees. The average annual wage for the new positions is projected at more than $117,000 at South End campus.

The company has nearly 250 IT employees at uptown Charlotte Plaza, part of more than 1,400 hires companywide in the division for 2019.

Local Lowe’s officials acknowledge that wage and benefits demands vary over the four operational areas, skewing higher the closer to Charlotte given the intense competition for IT workers there.

Charlotte also has IT hubs for Bank of America Corp., Wells Fargo & Co. and, most recently, Truist Financial Corp., whose headquarters debuted in Charlotte on Dec. 6 as part of BB&T Corp.’s $33.5 billion purchase of SunTrust Banks Inc.

Truist has plans to open an Innovation and Technology Center in Charlotte.

Lowe’s officials also consider the local data center as not only a pivotal piece of the IT puzzle, but also a place for new hires to learn and grow in their duties in order to be considered for work in Mooresville and Charlotte.

“We’re an attractive option for information technology employees who don’t want a daily commute to Mooresville, though they may go once a week,” Shepard said.

There is a similar IT service desk in Mooresville, which provides the company with the operational redundancy necessary in case of site outages, utility interruptions, weather-related events or other disruptions.

“We have to be creative in hiring for the needs we have, and considering Charlotte only is short-sighted,” Shepard said.

Shepard and Chris Meadows, Lowe’s senior director for its IT Service Desk, expressed optimism that some of its new hires could come from locals affected by job shifts involving BB&T Corp., now Truist Financial Corp.

“Experience in IT is obviously a bonus,” Meadows said.

“Promotion is a key consideration in work for Lowe’s because there’s ample opportunity to move up for those who are willing to learn, work hard and take care of the problems they are asked to resolve.”

Winston-Salem’s IT workforce gains have been Wilkesboro’s losses.

The company said April 5 it would move 680 jobs out of its Wilkesboro corporate-operations center, with 614 job positions being moved to Mooresville and the rest to Winston-Salem. There also were 14 new local hires.

The company said its 1.3 million-square-foot Mooresville campus would have a workforce of about 4,400 with the transition initiative was completed.

Altogether, about 32% of Lowe’s Wilkes workforce was affected by the restructuring that has been completed.

“Wilkesboro will continue to be home to our contact center and central production office,” said Steve Salazar, Lowe’s corporate communications manager. That office coordinates product installations, typically by contractors, for customers in the Southeast.

Lowe’s was founded in Wilkes County, but the company moved its headquarters from Wilkesboro to Mooresville in 2003, taking more than 1,000 well-paying jobs with it.

In February 2017, the retailer confirmed plans to cut 70 to 75 support jobs in Wilkesboro as a part of 531 corporate-office and support cuts overall.

“It’s always difficult taking jobs from one geographic area and moving them to another. It means someone wins and someone loses,” Beahm said.

Among those attending the local data center open house were officials from Greater Winston-Salem Inc. and Forsyth Technical Community College.

Forsyth Tech has a well-earned reputation for providing training assistance, particularly for manufacturing and production jobs, for the past two decades.

School officials took the tour Wednesday to learn about what technology training Lowe’s conducts at the center.

“In Winston-Salem, we have a growing information technology sector employing a lot of skilled talent,” said Mark Owens, chief executive and president of Greater Winston-Salem.

“We are working with local schools, colleges and universities, and employers to ensure that our strong talent pipelines will meet current and future workforce needs.

“We’re also a high-value location with a great quality of life and low cost of living, which is why we see net growth in employment and population,” he said.

The Food and Drug Administration announced Thursday that Juul Labs Inc. is required to remove all electronic cigarette products from U.S. shelves.

The historic Lasater mill house in Clemmons has sold for $1.75 million to a Clemmons group, according to a Forsyth County Register of Deeds fi…

Novant Health Inc. is looking westward for its next North Carolina expansion market, hoping to establish a fourth urban hub in the state.

Wells Fargo to pay travel, lodging costs for employees who have to travel to have an abortion

Wells Fargo & Co. said Monday it will reimburse transportation and lodging costs for employees who must travel more than 50 miles for an a…

The Supreme Court's decision to overturn Roe has catapulted businesses into the most divisive corner of politics. Here's how they're responding.

A Winston-Salem industrial plant with Collins Aerospace as its tenant has been sold for $11.4 million to a New York City group, according to a…

The downtown Winston-Salem restaurant site occupied by Cin Cin Burger Bar has been purchased for $950,000 by a Winston-Salem group, according …

T.J. Graley helps answer a technology issue at Lowe’s IT Service Desk. The local workforce is part of an overall hiring initiative launched in December 2018 to add up to 2,000 IT employees.

Lowe’s IT Service Desk features a disaster-relief room where the company can monitor and assist stores trying to keep IT functions going before, during and after a natural disaster.

All Lowe’s employees wore the signature red vest at the Lowe’s IT Service Desk during the tour event.