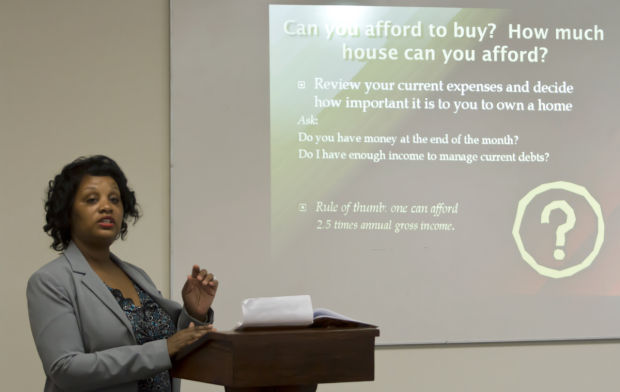 Sharon Thomas, a housing educator with the Center for Home Ownership, leads a class for first time home buyers on Monday, May 20, 2013 in Winston-Salem, N.C. 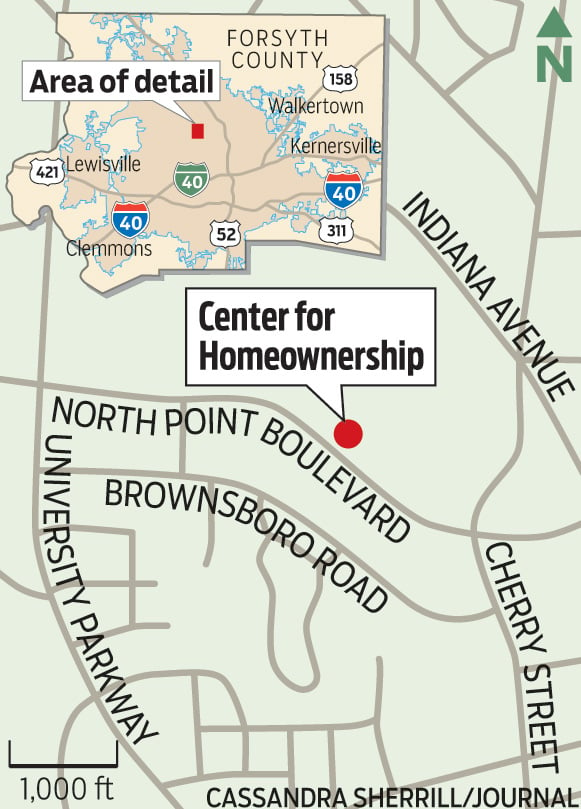 Caprice Glenn grew up in a house with a backyard, a place where she could play.

But in recent years, she became a renter, living in an apartment.

Then Glenn, now 24, became a single mom and decided it was time to make a change in her living quarters.

“I didn’t want to have my son in an apartment because he couldn’t experience the same thing I did when I was growing up,” Glenn said.

In January, she and her son, who is a year old, moved into a house in Winston-Salem. It has a backyard.

“He loves to go outdoors and being able to go outside and just play with his neighbors,” she said.

As part of a requirement for the Habitat for Humanity house she bought, Glenn recently attended a home-buyer education class through the Center for Homeownership, based in Winston-Salem.

“The homebuyer-education class is designed to provide an overview of the entire home-buying process,” said Phyllis Caldwell, the director for the Center for Homeownership. “We include five critical components — preparing for home ownership, shopping for a home, obtaining a mortgage, the closing process and life as a homeowner.”

The Center for Homeownership is a program of Financial Pathways of the Piedmont, formerly Consumer Credit Counseling Service of Forsyth County. The agency provides housing counseling and home-buyer education to potential homeowners, as well as a home maintenance workshop in partnership with the City of Winston-Salem Neighborhood Services/Housing Rehabilitation Department.

Clients who sign up for one-on-one counseling will work with a counselor who will look at their income and debt, review their credit report and then come up with an action plan.

“The action plan is developed to sort of eliminate the barriers to the home-buying process,” Caldwell said. “We know that the two biggest barriers are credit and debt. So those are the things we’re going to address.”

Many clients are referred to the Center for Homeownership by lenders, realtors or other housing-service providers.

“The center acts like the umbrella organization,” Caldwell said. “Our role is to provide supportive services for those organizations.”

The Center for Homeownership doesn’t have any eligibility guidelines.

“Housing counseling and home-buyer education should be a requirement for any first-time homeowner,” Caldwell said. “I don’t care how much money you make.”

While the home maintenance workshop is free to the public, the home-buyer education workshops and one-on-one counseling services are $25 for Forsyth County participants and $50 for people who live outside the county.

Alex Klein of Winston-Salem and her husband Eddie Garcia also participated in the center’s home-buyer-education class.

Klein hopes to buy a house in or near downtown Winston-Salem because her company, Green Clean, is on Marshall Street and her daughter goes to school in the downtown area.

“We wanted a little bit more stability and we also need more space than we’re finding for rent,” Klein said. “It just seems like it might be more cost effective to buy than to continue renting and kind of throwing away money every month.”

The couple didn’t know much about the home-buying process before they took the class, but said they might consider finding out more about some of the down-payment assistance programs through the City of Winston-Salem that were mentioned in the class.

Glenn said that the class opened her eyes about the types of loans people should avoid.

“I knew a little information about loans, but I didn’t know a lot about predatory lending and anything like that,” she said.

The only downfall has been cutting her grass and trying to put in a mail box.

“That was pretty tough,” Glenn said laughing. “I’m still learning on that.”

Dumb mistakes you can avoid when investing

McDonald's Teams Up With Biden Admin To Promote COVID Vaccinations

McDonald's Teams Up With Biden Admin To Promote COVID Vaccinations

How you can create a steady income for retirement

How you can create a steady income for retirement

Why you should shop small and support local businesses

Why you should shop small and support local businesses

Gap between CEO, employee compensation continued to widen in 2020 in the Triad

Not even the COVID-19 pandemic could slow the ever-widening pay gap between corporate chief executives and rank-and-file employees.

Also, check out more of the week's best financial tips from experts at NerdWallet, Forbes and the Motley Fool.

A Winston-Salem floral company is one of eight recipients of a $50,000 grant from the spring 2021 NC Idea Seed funding cycle.

The Village 1373 apartment complex in Greensboro has been sold for $28.75 million to a Cincinnati real-estate group.

Novant gets approval for fifth community hospital in Mecklenburg

Business Milestones: On the move

Wells Fargo & Co. is closing another 25 branches, including one in Asheville, in the latest phase of a multi-year nationwide initiative.

Sharon Thomas, a housing educator with the Center for Home Ownership, leads a class for first time home buyers on Monday, May 20, 2013 in Winston-Salem, N.C.