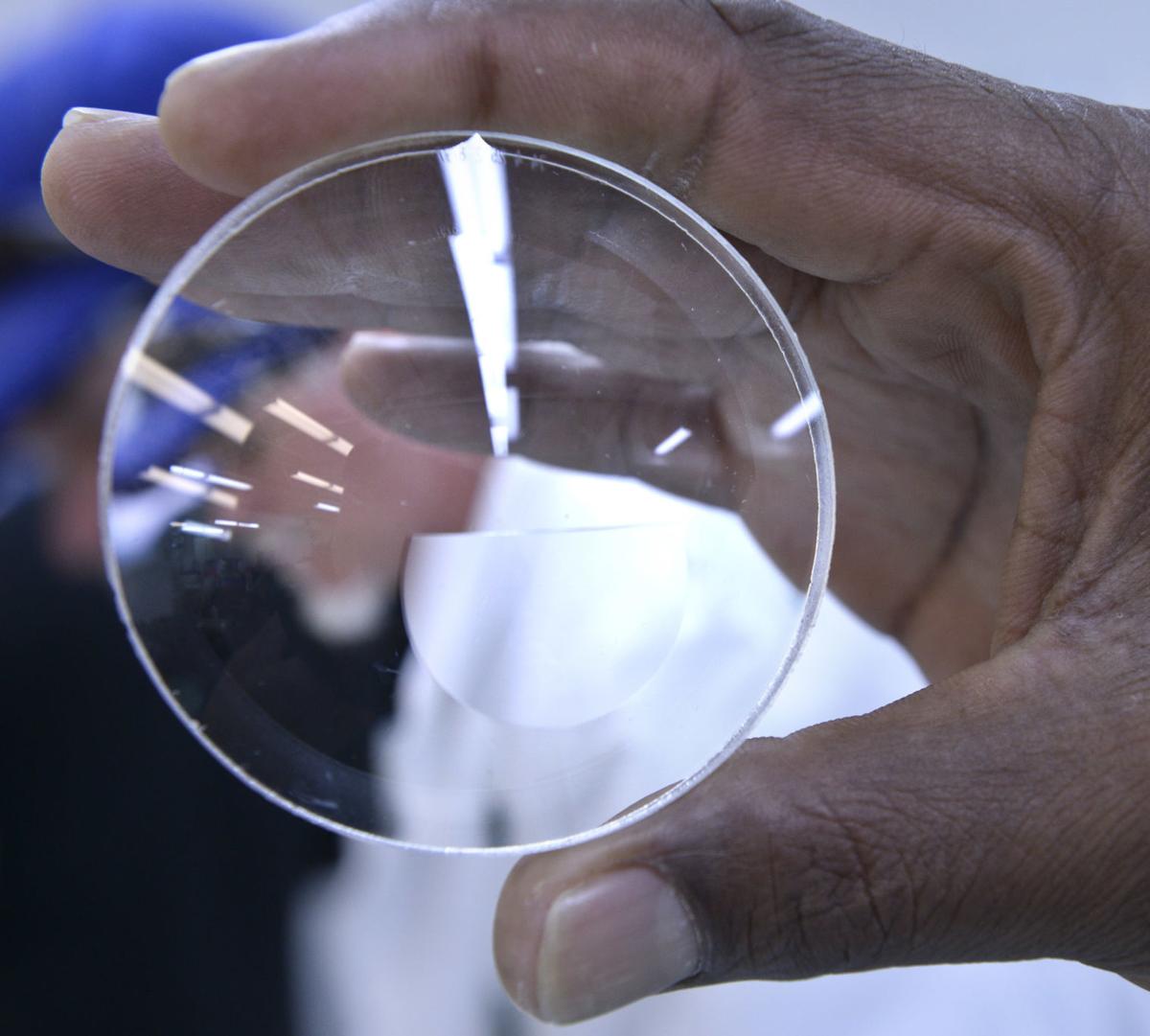 A raw eyeglass lens is seen in 2015 at the Industries For The Blind optical lab in Winston-Salem, ready to be ground, polished, and cut into a lens for a new pair of eyeglasses. The nonprofit group is now known as IFB Solutions Inc. 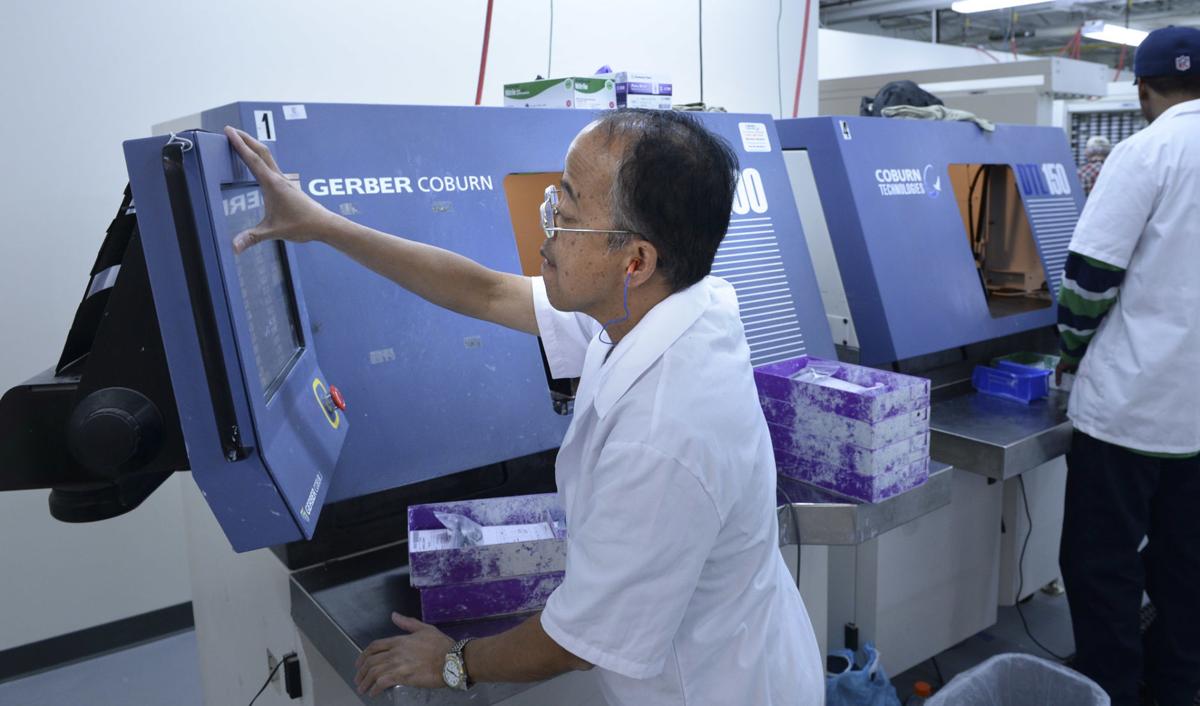 Jal Montero operates a generator, an automated machine that performs the initial grinding on a glass disk to make an eyeglass lens, at the Industries For The Blind optical lab in Winston-Salem in 2015. The nonprofit group is now known as IFB Solutions Inc.

At stake is the expiration of three U.S. Department of Veterans Affairs contracts involving its optical laboratories.

Those contracts affect 137 of 556 local jobs, including 76 employees who are blind and 15 who are veterans. IFB is the largest employer of the blind in the United States. It has about 1,000 employees overall.

There’s also $15.4 million in annual revenue for the nonprofit group formerly known as Winston-Salem Industries for the Blind Inc. That represents nearly 20% of IFB’s total revenue.

IFB has been providing prescription eyewear products to the VA since the late 1990s.

The group has been attempting for nearly three years to preserve its optical laboratories as a mandatory source for eyeglass manufacturing for the VA.

“The VA is about 97% of the production we have with our optical portfolio,” said Dan Kelly, IFB’s chief operating officer, who is blind.

Legal rulings in federal appellate court in November and May were in favor of a disabled veteran-owned optical business, PDS Consultants of Sparta, N.J., that has provided visual products to the VA since 1998.

The rulings represented a defeat for the AbilityOne program that has provided federal government contracts for groups that employ the blind or severely disabled.

IFB officials were told by the VA that the first contract would end June 30.

However, that end date was extended to July 31. If the contract is not reviewed, IFB said it would have to eliminate 47 jobs.

The other optical contracts would end Sept. 30 and Oct. 31, respectively. The remaining members of the lab’s work force, or 90 jobs, would be cut if the extensions are not granted.

“We do not believe that Congress ever intended to benefit veteran-owned small businesses at the expense of people who are blind or severely disabled,” Kelly said.

“There is plenty of business for both veteran-owned small businesses and AbilityOne nonprofits, many of whom, like IFB Solutions, also employ a significant number of veterans.”

IFB officials are lobbying Congress, including members of the North Carolina delegation, to persuade the VA to delay, if not halt, the end of the contracts.

If that doesn’t work, IFB plans to file a petition by Aug. 8 to the U.S. Supreme Court to hear its appeal.

A decision could come in November on whether the Supreme Court accepts the appeal. If it does, it likely could take 18 to 24 months for a decision.

Foxx said in a statement Friday that "while visiting the Industries for the Blind Solutions facility in Winston-Salem, I’ve seen the great output and incredible impact that this business has on the livelihoods of differently abled individuals in the community."

"It is very unfortunate to see that two procurement programs that Congress intended to be complementary have been interpreted by courts as competing against each other, especially when the jobs of veterans and others who have been using the AbilityOne program for 80 years are at stake.

"While the courts have limited Secretary Wilkie’s influence over the issue, I’m keeping open channels of communication with industry stakeholders and the VA to find a fix," Foxx said. "The procurement process shouldn’t be a zero-sum game for beneficiaries of the AbilityOne program and the Veterans First Contracting program."

The office of Sen. Thom Tillis, R-N.C., said last week that his chief of staff met with the IFB Solutions contingent.

The senator "is concerned that recent court rulings could lead to the unintended consequence of blind or severely disabled North Carolinians losing their jobs," according to a statement from Tillis' office.

"For decades, both the general disabled community and the disabled veterans’ community have existed in a harmonious balance when it came to securing jobs and competitive contracts with the federal government.

"Senator Tillis is committed to working with his colleagues to address this problem and return these two programs to mutual coexistence," according to the statement.

For decades, IFB’s VA contracts have come through the AbilityOne program.

AbilityOne goes back to legislation Congress approved in 1938 that gives federal government preference to companies that employ the blind or severely disabled.

The legal case, which began in August 2016 involves “the relationship between two statutory regimes designed to benefit two historically disadvantaged groups: veterans and disabled persons,” the court said in its ruling.

The Veterans Benefits Act of 2006, also known as Veterans First legislation, is one of the ways Congress recognizes and repays disabled veterans for their military service.

PDS’ legal claim has been that businesses owned by disabled veterans should have priority over those from AbilityOne, based on a U.S. Supreme Court interpretation of the act.

The act’s language includes what is known as “a ‘rule of two’ analysis.”

The act requires attempting to procure the eyeglasses involved in the VA contract from at least two businesses owned by disabled veterans before attempting to buy them “from any other source, including a nonprofit agency for the blind or significantly disabled,” according to the appellate court panel’s decision.

The three-judge appellate court panel ruled in November that “the VA is required to use the rule of two even when goods and services are on the (procurement) list.” In May, the full appellate court upheld the panel’s ruling.

A bipartisan letter clarifying the intent with the contracts in support of AbilityOne was signed recently by 34 members of Congress, including Foxx and Walker, and delivered to VA Secretary Robert Wilkie.

“AbilityOne nonprofits, like IFB Solutions, provide employment for more than 45,000 people who are blind or severely disabled,” Kelly said.

“If we aren’t vigilant in protecting the jobs as intended by Congress when it created the AbilityOne program, those individuals may have nowhere to turn.”

Kelly said it would take a significant retraining initiative for the affected optical lab employees who are blind ... if there are job openings in other local production segments that include apparel, mattresses and office and janitorial assembly and packaging.

Kelly said “what’s at stake are the nearly 1,800 jobs for people who are blind or with severe disabilities, including many veterans, generated by the $81.9 million in VA contracts with AbilityOne nonprofits,” Kelly said.

“Individuals who, without jobs through the AbilityOne Program, face a devastating 70% unemployment rate,” he said. “The harm of losing their jobs would be severe and irreparable.”

Kelly said that by comparison, the VA provides about $5.4 billion annually in contracts to veteran-owned small businesses.

“We are hard-pressed to understand the motivation behind cutting out AbilityOne nonprofits from our very small share of the overall contracting pie,” he said.

K&W Cafeterias Inc. said in a bankruptcy filing it has found separate buyers for a 3,621-square-foot lakefront home and a residential lot …

Gov. says first round of COVID-19 vaccine is near but urges NC to stick with masks

A raw eyeglass lens is seen in 2015 at the Industries For The Blind optical lab in Winston-Salem, ready to be ground, polished, and cut into a lens for a new pair of eyeglasses. The nonprofit group is now known as IFB Solutions Inc.

Jal Montero operates a generator, an automated machine that performs the initial grinding on a glass disk to make an eyeglass lens, at the Industries For The Blind optical lab in Winston-Salem in 2015. The nonprofit group is now known as IFB Solutions Inc.