A temporary $50 increase in regular state unemployment benefit payments is projected to begin by Oct. 30, according to the state Division of Employment Security.

The division provided an update Friday on what is known as the increased benefit amount (IBA) program that affects certain furloughed and unemployed North Carolinians.

DES estimates between 15% and 20% of current UI claimants will be eligible for the extra $50. 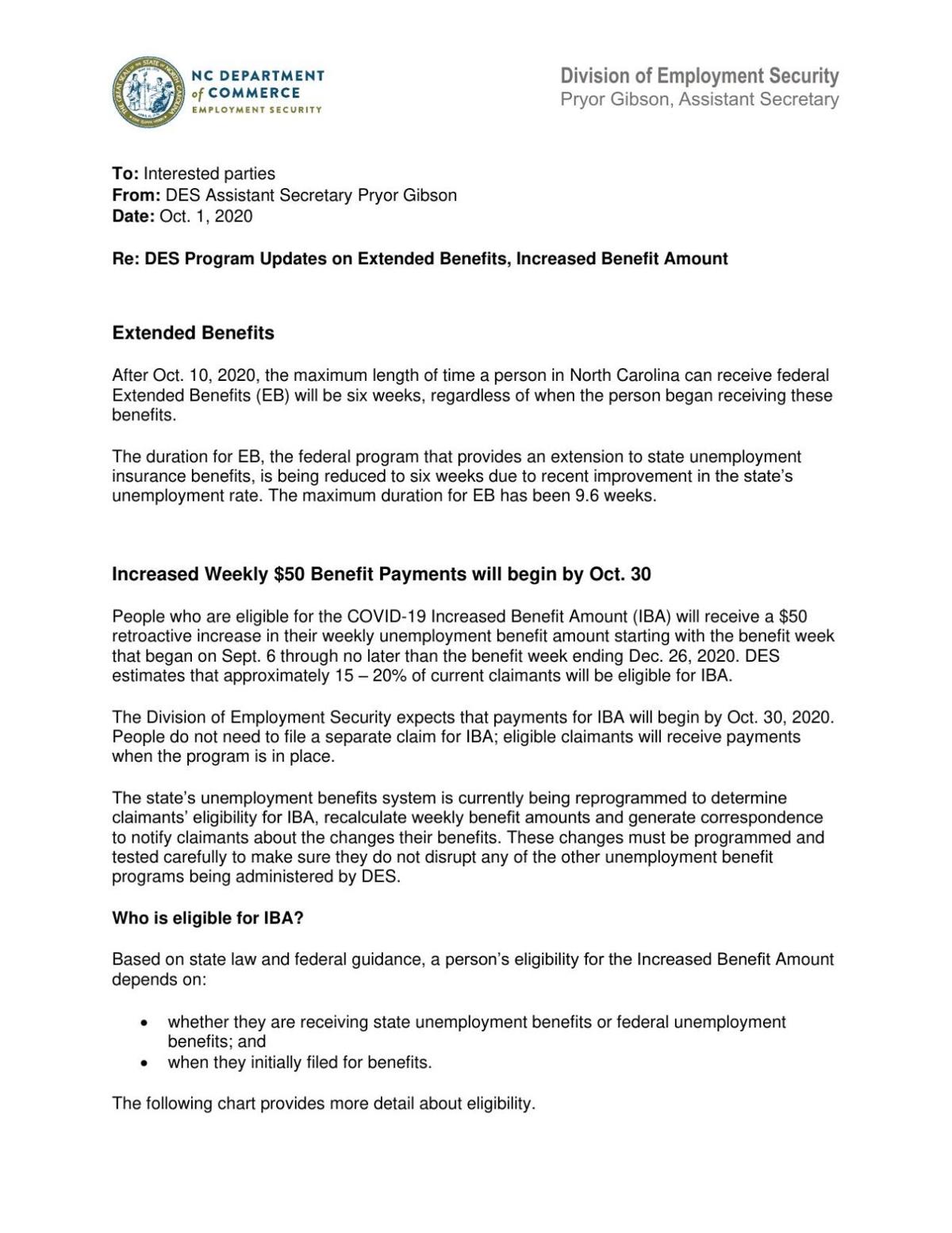 Claimants who exhausted their regular state benefits before Sept. 6 and are currently receiving federal benefits are not eligible.

Claimants whose regular state benefits have exhausted after Sept. 6 are eligible, as well as those who are receiving federal pandemic unemployment assistance and filed their initial claim for those benefits after Sept. 6.

The extra benefit was approved by the Republican-controlled General Assembly in the third round of COVID-19 relief bills that passed Sept. 4.

The average approved N.C. unemployment claimant currently receives $278 a week in regular state benefits. The extra $50 a week would boost the payment by 18%.

DES has said the delay is related to "the complexity of determining (individuals') eligibility for the program, extensive reprogramming and testing of the unemployment (processing) system."

"It is required to ensure that payments can be made accurately without disrupting the benefit programs already in place."

Another UI program, known as federal extended benefits, will shift on Oct. 10 from lasting up to 9½ weeks to up to six weeks.

Those benefits are available to certain UI claimants who have exhausted up to 12 weeks of regular state UI benefits and up to 13 weeks of federal pandemic emergency unemployment compensation.

The number of weeks is decreasing because the state's jobless rate dropped from 8.5% in July to 6.5% in August.

The maximum weekly UI benefit amount has been $350 since July 2013, when a GOP super-majority lowered it from $535 as part of its strategy for paying off a $2.8 billion debt to the U.S. Labor and Treasury departments.

The state provides currently a maximum of 12 weeks of regular UI benefits — tied for lowest in the country with Florida.

During the debate on a third relief bill, Republican leadership squashed a Democratic bill to raise the weekly maximum to $500 and the maximum number of weeks to 26 — the latter the same as 44 other states.

The number of North Carolinians filing for initial state and federal UI benefits was at 1.3 million after 8,553 filed Thursday, DES reported.

"A large number" of the new claims the past two weeks came from individuals reaching one of two filing limitations.

The 13-week program is federally paid, but at regular state benefit levels.

About 30% of the 4.26 million North Carolinians considered part of the state’s workforce as of mid-August have filed a state or federal unemployment claim.

DES has paid out $8.16 billion in state and federal UI benefits.

That includes $571.1 million from a projected $716.6 million from six weeks' worth of federal Lost Wages Assistance funding.

The Federal Emergency Management Agency said Sept. 15 that North Carolina has reached its limit for the program.

The Lost Wages program, created by an executive order from President Donald Trump, is a short-term replacement for the $600 weekly unemployment supplement that was available from mid-April until July 26, when it was allowed to expire by Congress.

The left-leaning N.C. Justice Center has said the state's economy has been losing about $350 million each week since the expiration of the $600 federal supplement.

State to remain in Phase 3 for three more weeks

Gov. Roy Cooper said Wednesday — as expected — that North Carolina will remain in Phase Three for another three weeks because the state's key …

Wells Fargo & Co. continues to accelerate its branch-closing strategy with another 26 locations in early October, according to a report di…