The legal dispute over the Champion brand between Hanesbrands Inc. and Keds LLC has taken a 180-degree turn with the shoemaker’s move last week to sue the apparel manufacturer for breach of contract.

A federal judge in Massachusetts dismissed on May 21 Hanesbrands’ trademark infringement lawsuit against Keds. 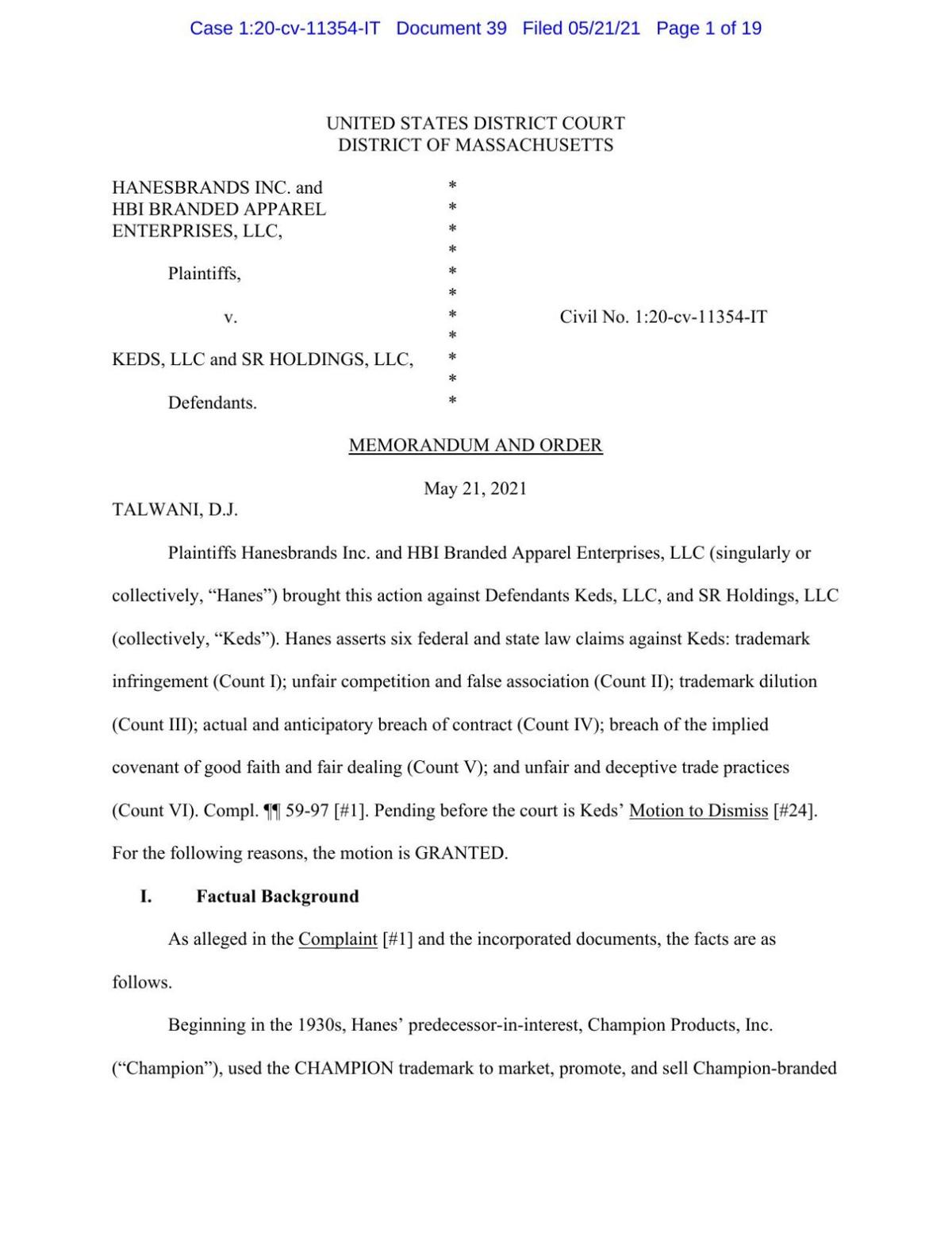 On Thursday, Keds filed its lawsuit in the same Massachusetts District Court.

Hanesbrands’ corporate policy has been to not discuss current legal actions.

Keds said its claims “arise from Hanes’ bad-faith scheme to deliberately breach the unambiguous terms of the parties’ licenses agreement in order to pressure Keds to renegotiate the agreement, and thereby, extract valuable financial and other concessions from Keds.”

“By way of this action, Keds seeks to recover the substantial damage caused by Hanes’ intentional and unlawful conduct.”

Hanesbrands made six federal and state law claims in its compliant against Keds that also included: unfair competition and false association; trademark dilution; actual and anticipatory breach of contract; breach of the implied covenant of good faith and fair dealing; and unfair and deceptive trade practices.

Hanesbrands requested preliminary and permanent injunctive relief against Keds, to halt its use of the Champion trademark on all apparel, compensatory damages, interest and attorney fees.

According to court documents, the partnership between Champion and Keds goes back to the 1930s.

Keds owns the Champion trademark for casual footwear in the U.S. and Canadian markets.

In 1987 — two years before Sara Lee Corp. paid $320 million in cash for Champion Products Inc. — Keds granted Champion the right to use the Keds Champion trademark for a “high-performance athletic shoes” line in the two countries.

Champion and Hanesbrands are not allowed to use the brand to market casual, street or playtime wear, or footwear designed for walking and for general purposes.

However, the licensing agreement does not prevent Hanesbrands from using Keds Champion “in any country where Keds does not have rights in the mark and where Hanesbrands may have acquired or will acquire superior rights in the trademark for athletic shoes.”

The licensing contract has been subject to five-year renewals, the last of which occurred on Jan. 1, 2017.

Where the dispute comes in is that Hanesbrands alleged Keds “deliberately expanded its use of the Champion trademark in connection with the marketing and sale of its shoes in foreign territories, including through more prominent use of the Champion mark itself.”

Hanesbrands said it tried unsuccessfully in April 2018 and May 2019 for an outright purchase of Keds’ rights to the Champion trademark.

The judge dismissed Hanesbrands’ claim of potential consumer confusion in the U.S. marketplace by ruling that “Keds may lawfully sell its Champion-branded shoes in the United States. There is no risk of confusion here.”

“To the extent that Hanes is attempting to enforce its foreign trademark rights against Keds in foreign jurisdictions, the courts of those jurisdictions have the interest and expertise to adjudicate those disputes.”

In the Keds complaint, it claimed Hanesbrands “began to regret the (1987) deal it had signed.”

“Over the years, Hanes repeatedly complained to Keds about the royalty rates it had agreed to pay to Keds, the approval rights the parties had negotiated at arms-length, and the scope of the license Keds had granted to Hanes.”

Keds cited Hanesbrands’ latest growth initiative called Full Potential that it unveiled in May, but had informed analysts and investors that it was being constructed going back to 2020.

Hanesbrands projects Full Potential will generate an additional $1.2 billion in revenue by fiscal 2025. That would put Hanesbrands at $7.4 billion in annual revenue, up from $6.2 billion projected for fiscal 2021.

At the heart of the initiative is what Hanesbrands considers as its core strengths: its globally recognized basic apparel brands; domestic, Central and Latin America and Asian supply chain; “deep consumer loyalty”; broad channel distribution; and global footprint.

“The plan drives rapid growth of the Champion brand by investing in key geographic markets, expanding into women’s and kids’ apparel and casual footwear, and creating a premiere online experience at Champion.com,” the company said.

Keds said in its complaint that as part of Full Potential — which it referred to as an “aggressive, multi-billion-dollar growth plan” — “Hanes decided to take things into its own hands.”

Keds called Hanesbrands’ lawsuit “a deliberate breach of the express terms of the license agreement. ... Hanes’ scheme is a quintessential unfair and deceptive practice.”

R.J. Reynolds Tobacco Co. is expected to implement soon its third 14-cent per pack increase of 2021 for most of its key traditional cigarette brands.

An affiliate of D.R. Horton Inc. has paid $4.46 million for a combined 47.13 acres in Kernersville, according to a county Register of Deeds fi…

Wells Fargo & Co.’s latest list of 17 branch closings, disclosed Friday, raises the total to at least 719 nationwide since the initiative …