Hanesbrands Inc. is being sued by the country's largest youth football association, which is claiming infringement on its name and logo.

The complaint by Pop Warner Little Scholars Inc. and Pop Warner Authentic Inc. was filed Monday in federal District Court for the Central District of California. The Pop Warner groups are based in Langhorne, Pa.

The group said the California federal court is an appropriate venue for the complaint because Hanesbrands has 30 retail stores in the district and has advertised and offered for sale the Champion apparel in dispute there. 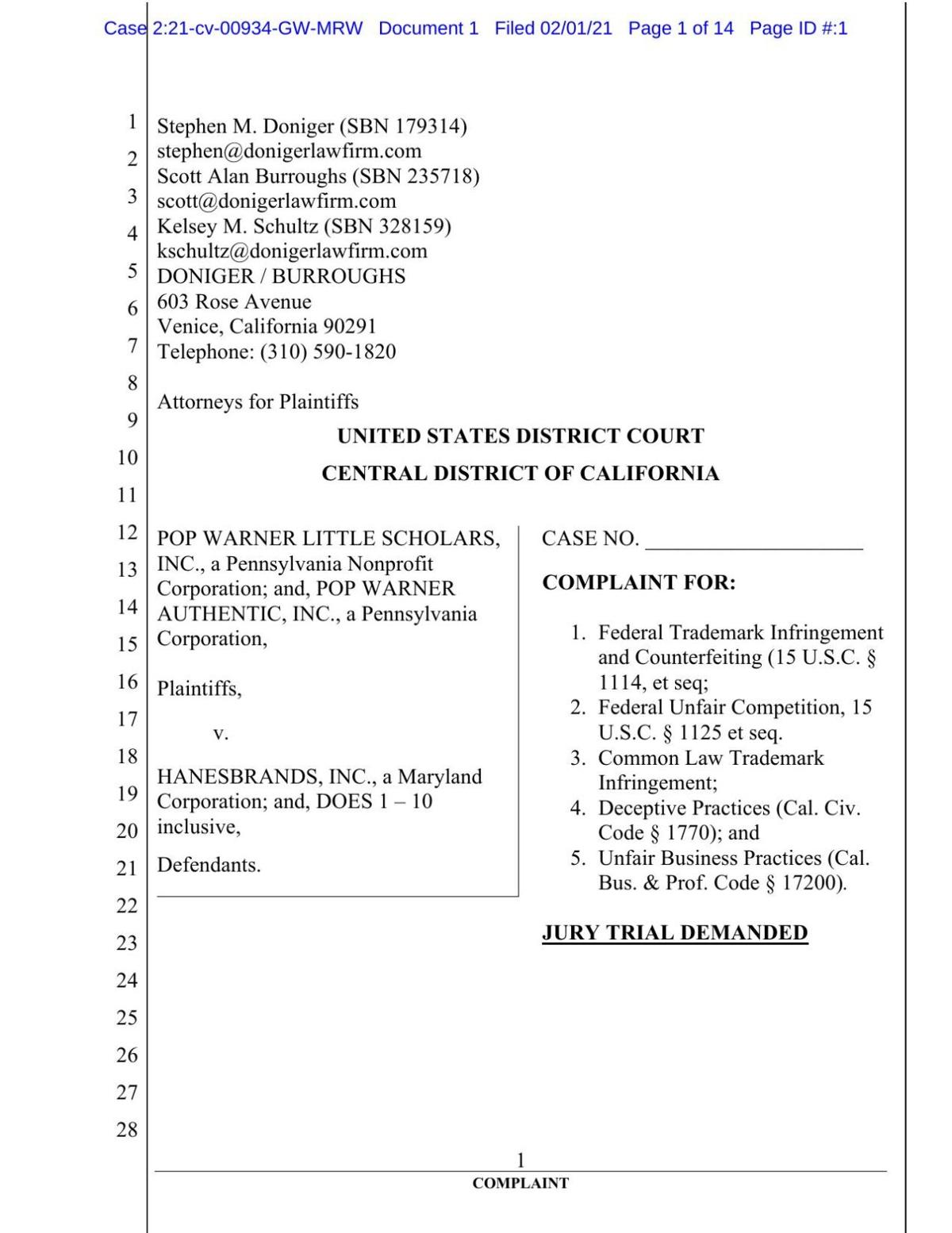 A separate complaint has been filed against BSN Sports LLC, a sportswear company owned by Bain Capital.

The plaintiffs are requesting injunctions against the companies' current and future use of its trademarks.

Hanesbrands could not be immediately reached for comment about the lawsuit.

Pop Warner said it has more than 325,000 youths between the ages of 5 to 16 playing football or cheerleading in its organization.

It said it owns two federal trademarks first used in 1933 and 1966, respectively. One logo cited in the complaint features the brand in all caps with a football containing a star image swooshing underneath.

The groups said that in 2020 its Pop Warner Authentic subsidiary became the sole authorized manufacturer of its merchandise, including uniforms, uniform jerseys and patches.

The groups accuse Hanesbrands and its Champion brand, and BSN Sports, of manufacturing merchandise "that exploits the Pop Warner brand and trademarks," including its logo, on football uniforms it was marketing and selling at www.championteamwear.com.

Those uses, the groups claim, "indicate and imply that the accused products were manufactured, endorsed or approved by plaintiffs."

"Hanesbrands is appropriating plaintiffs' brand of academic and athletic excellence."

The groups said they notified Hanesbrands of their infringement concerns on July 6 and Dec. 2 with no response from the company.

A search of the championteamwear.com website Thursday did not find any Pop Warner merchandise.

"Defendants use of the (Pop Warner) word mark has caused, and will continue to cause, confusion in the marketplace, harm to the business reputation and loss of goodwill in the word mark," according to the complaint.

The plaintiffs said they are requesting damages in excess of $75,000, which it wants to be trebled. They also want the defendants to turn over all profits made from their Pop Warner merchandise, and all remaining merchandise to be destroyed.

A maker of corrugated display products, Pratt Southeast Displays, has informed the N.C. Commerce Department that it is closing its Whitsett facility in Guilford County on Jan. 15, eliminating all 81 jobs.

Kontoor Brands Inc. said this week its Wrangler brand has signed a licensing agreement with ViacomCBS Consumer Products to make a clothing lin…