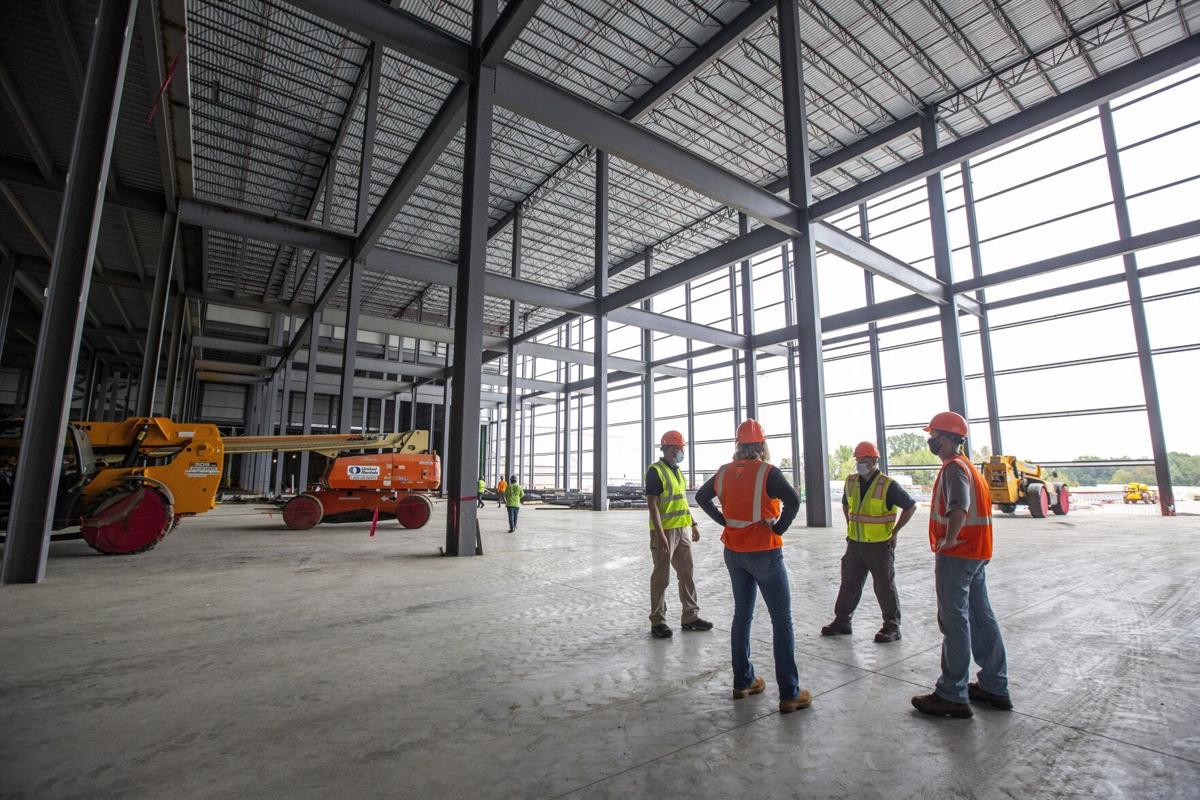 Work is progressing at the planned Nestle Purina plant in Eden. The former MillerCoors plant in Eden is being converted into a dry dog-food facility — one of several economic development projects in the Carolina Core. 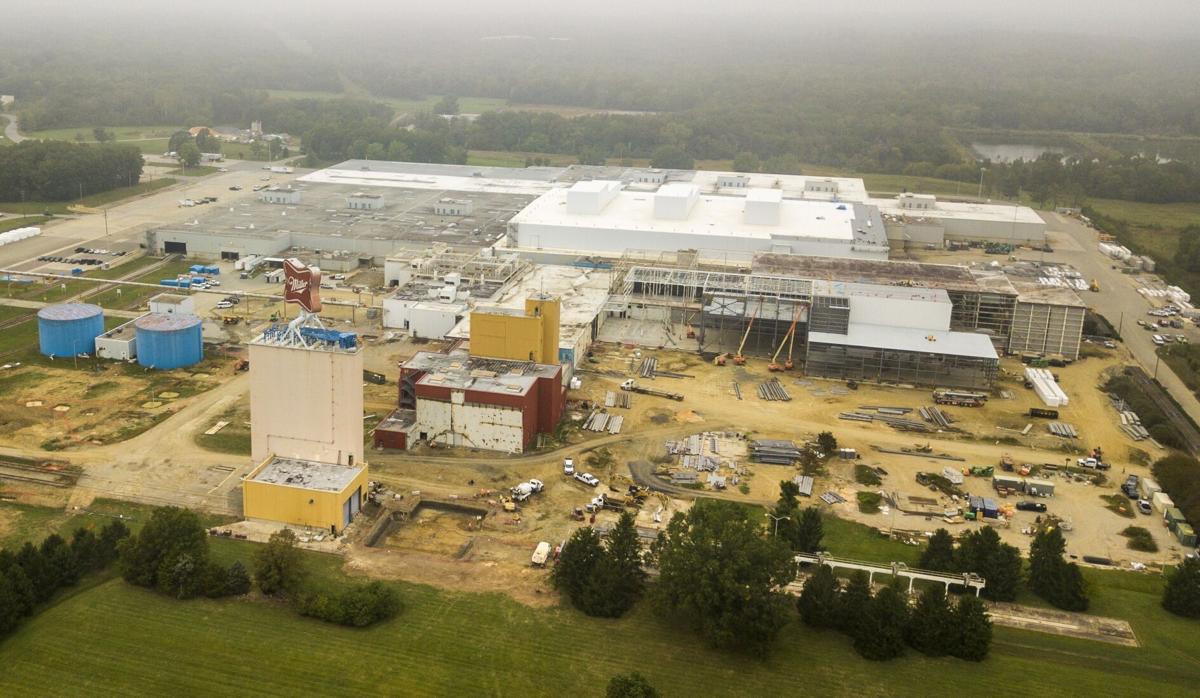 The Nestle Purina plant under construction. 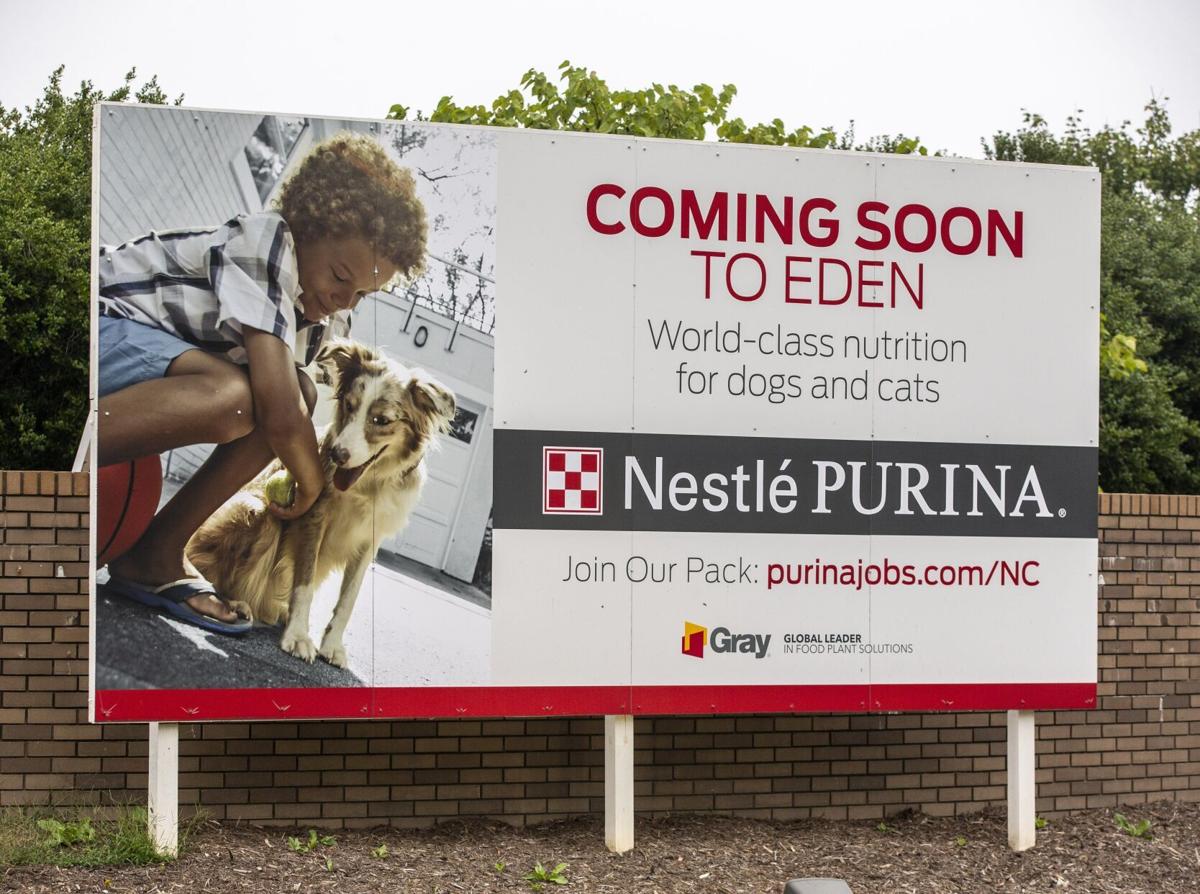 The Nestle Purina plant under construction in Eden.

The Piedmont Triad Partnership and Carolina Core economic-development initiative share a common mission and hope of “Being future ready” and promoting a “Region on the rise.”

What that signifies is evolving so quickly, according to a leading economic workforce expert, that the region could be left behind without timely investments in education, infrastructure and marketing.

Meanwhile, the Carolina Core stretches from the Triad down U.S. 421 to Fayetteville. It was pieced together in attempt to push the region as a third economic engine, after Charlotte and the Triangle.

Ted Abernathy was the keynote presenter at the recent 2021 PTP State of the Region event. He is managing partner of Economic Leadership LLC, a Shallotte-based consultancy working with more than a dozen states on more than 100 projects.

Abernathy said that while 2020 and 2021 “have turned out to be very roller coaster years for business” because of the pandemic, the triple economic forces of “complexity, disruption and acceleration” already were factors in 2019.

Also briefly mentioned as a potential disruptive factor in 2019 — a pandemic.

“There’s no doubt that COVID has accelerated things even more ... the technological challenges we thought we were having in 2019,” Abernathy said.

“The scarcity of workers was a problem in 2019 with some individuals shifting to the gig economy.”

PTP officials stressed that the region is “brimming with opportunities set to transform North Carolina.”

“The state of our region is strong and getting stronger,” said Greensboro attorney Michael Fox, who took over as PTP’s president on Sept. 1.

“Our partners are pleased to report that economic development activity and prospect interest in the region has bounced back and even accelerated in most cases,” Fox said.

Those represent about 44,100 potential new jobs and $90.8 billion in capital investments, although Fox was quick to point out that the Carolina Core will win only a certain percentage of those projects.

“It’s certainly our goal to win our fair share, and we believe we are well-positioned to do so,” Fox said.

Fox said the key to successful recruiting of those projects in 2022 will boil down to a blending of a skilled workforce and increased marketing of the Carolina Core’s economic and quality-of-life advantages that also include local universities, the interstate corridor and healthcare, logistics and advanced manufacturing clusters.

The Carolina Core has four megasites with a combined 7,200 acres along the U.S. 421 corridor, one of which is the nearly 1,000-acre aerospace site at Piedmont Triad International Airport in Greensboro.

Abernathy cautioned that every group he’s spoken with over the past four months, covering 20 states, agrees that disruption will continue to be a major challenge.

“Everybody knows that we’re in a workforce crisis right now in America,” Abernathy said.

Although the phrase “Great Resignation” has been circulating during the pandemic to explain the significant labor-force decline, Abernathy said the trend is just accelerating the overall decline in the workforce growth rate since the early 1990s.

“Workforce is going to be the No. 1 competitive issue that determines which parts of our country are winners and losers for the foreseeable future,” Abernathy said.

“Everybody is going to be focused on how do we attract more workers, retain young people and train them for the jobs we need in the future,” Abernathy said.

COVID-19 “has made it worse” by lowering the child-care services labor force by 10% from pre-pandemic levels, which likely means available daycare slots are down by the same amount.

As a result, more single and two-parent households can’t find affordable child care, if available at all in their community.

An often overlooked factor in the worker-shortage discussion, one with significant socioeconomic implications, could be that the pandemic has led more North Carolinians to retire early.

Others finally followed through on delayed retirement plans dating back potentially to the Great Recession of 2008-11.

A U.S. Census Bureau household employment study — covering July 21 through Aug. 2 — found that nearly 40% of Americans, or 41.78 million out of 104.65 million, listed “I am retired” as their reason for not working.

Of that group, 15.078 million were listed as high school graduates, compared with 5.77 million with a bachelor’s degree and 6.22 million with a graduate degree.

Abernathy also cited the surge in individuals retiring before age 65 during the pandemic, particularly men.

“They decided that ‘we’re done,’ or while we may do something else, we’re just not going to be in the pool of people for workers,” he said.

The pandemic has led more people to be willing to move out of state in pursuit of work or more affordable cost of living and housing, both reversals of the trends in 2019.

“People under age 44 are moving in huge numbers,” Abernathy said. “They are reassessing their lives.

“Part of that assessment has come out in the ‘I quit’ movement. A record 15 million quit their jobs since April.”

Abernathy said “you might ask why everyone is quitting.”

“I hear people say (those quitting) are lazy, but two-thirds quit because they were able to find a better job offer.

“A lot of the job growth is in the white-collar professions that represent wage gains for them.”

He said some of the shift is individuals in the leisure and hospitality sectors gaining the education and/or the open door to enter higher-wage professions.

“We expect this to continue, with a recent survey finding that 40% of currently employed people may leave their job within six months.”

Abernathy said another major factor is individuals “deciding they want more control over their life” by taking the risk to start their own business during the pandemic.

Abernathy said employers may respond to the workforce crisis by accelerating their dependence on automation which will result in more job losses “or job shifts into other areas.”

A three-prong approach is driving the trend that Abernathy described at the shift to e-commerce, digitization of the workplace and corporate Darwinism.

“If you were not very good before this (the pandemic) all hit, you were hit hard and chances are you are not in business,” Abernathy said.

A recent study by ABB Ltd. cited by Abernathy found that 80% of workplaces have introduced or plan to increase their use of robots. Of that amount, 85% said COVID has been a game-changer.”

Robotics Industries Institute said there was a 64% year-over-year increase in robot orders during the fourth quarter of 2020.

“All of us have probably experienced the service side of this, whether it is hotel check-ins online, ordering your own fast food, or really remote-buying everything,” Abernathy said.

“You’ll see more of that in the healthcare and construction industries — two industries struggling to find workers and not known for being overly heavy in automation. There will be a lot more e-health.”

According to a Brookings Institution study released in January 2019, the Triad workforce may be among the most vulnerable in the country when it comes to the risk of losing a job to automation and artificial intelligence.

The report, titled “Automation, AI and the American worker,” ranked the Greensboro-High Point area as second among the nation’s top-100 metros for automation risk. The Winston-Salem MSA was listed at sixth.

At that time, 48.5% percent of all jobs in the Greensboro-High Point area, along with 48.1% of jobs in the Winston-Salem area, had the potential for being affected by automation.

Of those jobs, 29.4% of Greensboro-High Point MSA and 28.2% of Winston-Salem MSA jobs are at “high risk,” defined as being at least 70% automatable.

According to the report, what makes the Triad more vulnerable to automation includes: having a sizable manufacturing base; a significant number of low-skilled jobs; and a limited base of specialized jobs in “relatively durable professional, business and financial services occupations, combined with relatively large education and health enterprises.”

The latter point could be pivotal to the Triad given that its three healthcare systems — Wake Forest Baptist Medical Center, Cone Health and Novant Health Inc. — are the largest private employers with, combined, more than 32,000 employees.

Examples of high-risk professions include: 91% of those employed in food-preparation jobs; 87% of payroll and timekeeping clerks; and 78% of light truck and delivery-service drivers.

By contrast, just 4% of management analysts are considered at risk for automation, along with 8% of software developers and 11% of home-health aides.

A 2016 Futurework study by N.C. State University determined that Forsyth County could lose 34% of its current jobs total by 2040. Those jobs represent 22% of the total wages currently earned in the county.

The report determined the majority of today’s food-preparation, retail and cashier jobs — the first entry-level employment for many teens and adults — may not exist within a generation.

Abernathy still expressed confidence that the Winston-Salem and Greensboro-High Point metropolitan statistical areas and the Carolina Core will continue to have an overall jobs recovery beyond pre-pandemic employment levels.

However, he cautioned that many of the jobs being recovered won’t be the same in terms of how they were done as recently as 2011.

“COVID has been interesting from an economic standpoint because it has been so uneven,” Abernathy said.

“Depending on where you are in the country, COVID has had a different impact on the local economy.”

For example, Abernathy said the pandemic’s early disruptive impact on the leisure and hospitality sectors, such as major losses in tourism and restaurant jobs, played a role in the wage growth rate increasing in North Carolina over the past 19 months.

It’s a similar economic influence to the state or metro jobless rates declining as the result of more individuals dropping out of the work force, thus not being factored in the monthly employment surveys.

Government jobs have gone down in the region and state this year through August, but high-end professional and business services, and low-end leisure and hospitality have rebounded, Abernathy said.

“Everybody (among the 11) lost jobs except Savannah, but different kinds of jobs and different paces of losing jobs,” Abernathy said.

Abernathy said he believes every Triad and Carolina Core county will continue to add jobs over the next 12 to 18 months at an overall 1.9% growth rate.

What is Carolina Core?

The Carolina Core region stretches from the Triad down U.S. 421 to Fayetteville. It was pieced together in attempt to push the region as a third economic engine, after Charlotte and the Triangle.

The project, called Project Thunderbird, to get $106 million in state grants.

Kontoor Brands Inc. said this week its Wrangler brand has signed a licensing agreement with ViacomCBS Consumer Products to make a clothing lin…

Work is progressing at the planned Nestle Purina plant in Eden. The former MillerCoors plant in Eden is being converted into a dry dog-food facility — one of several economic development projects in the Carolina Core.

The Nestle Purina plant under construction.

The Nestle Purina plant under construction in Eden.