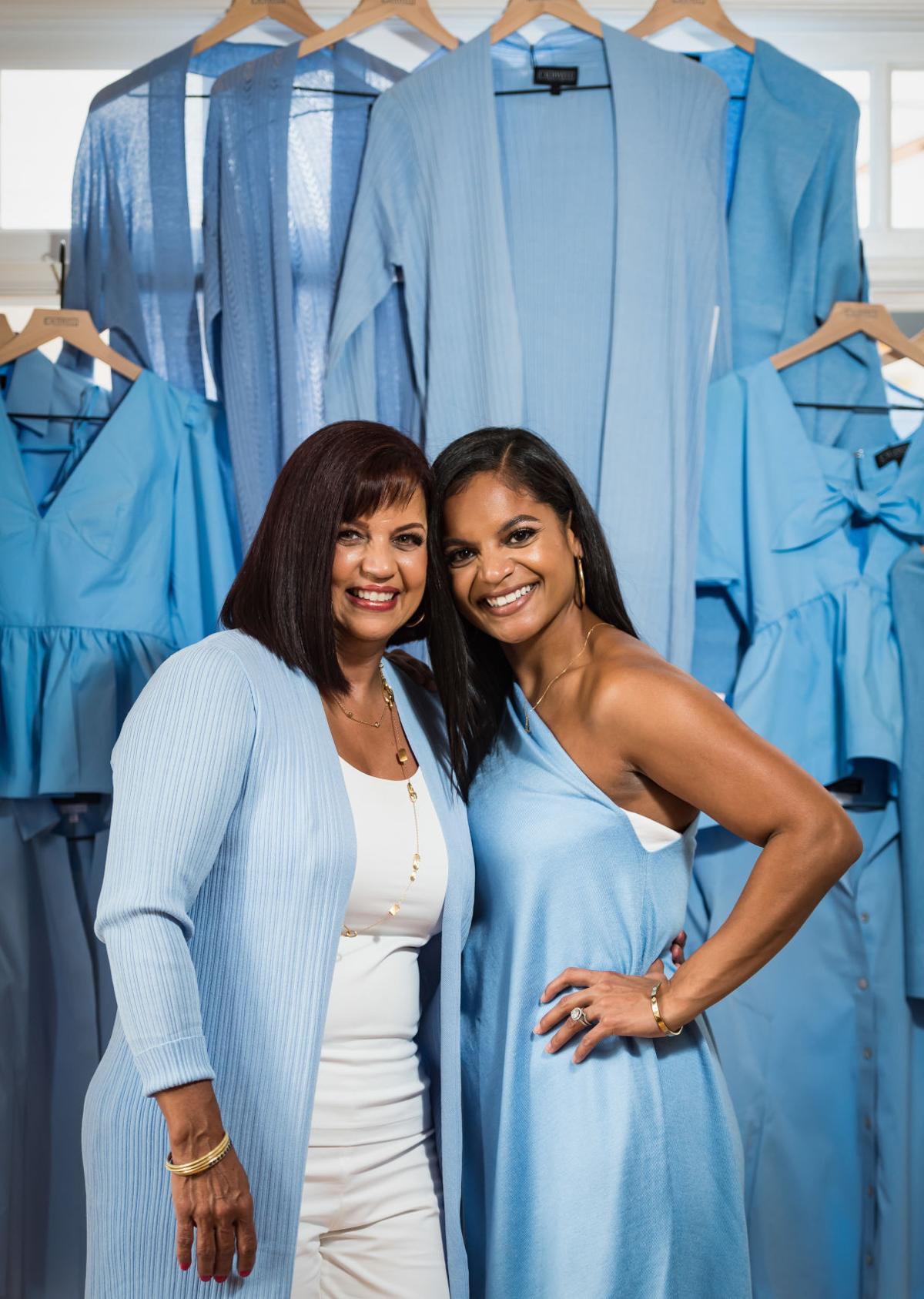 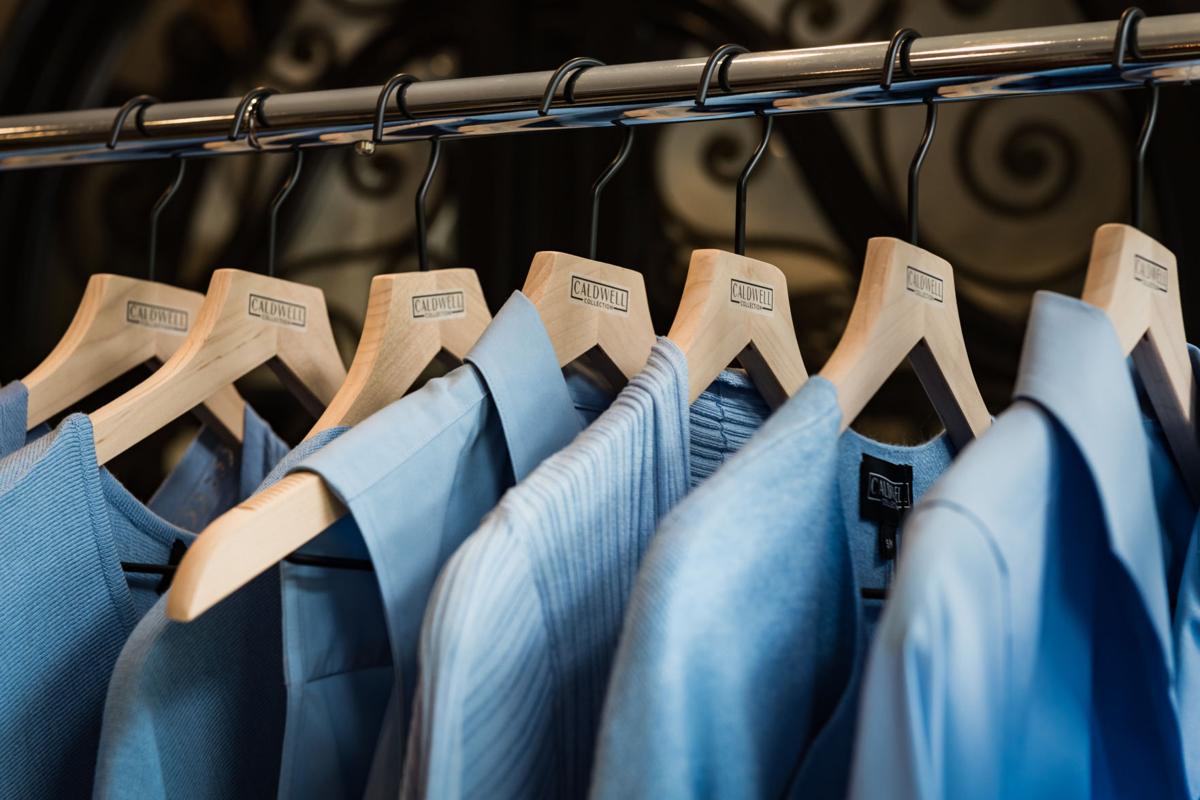 Tops from The Sky Blue Collection from Lisa Jeffries Caldwell and her daughter, Lauren Caldwell Lea. 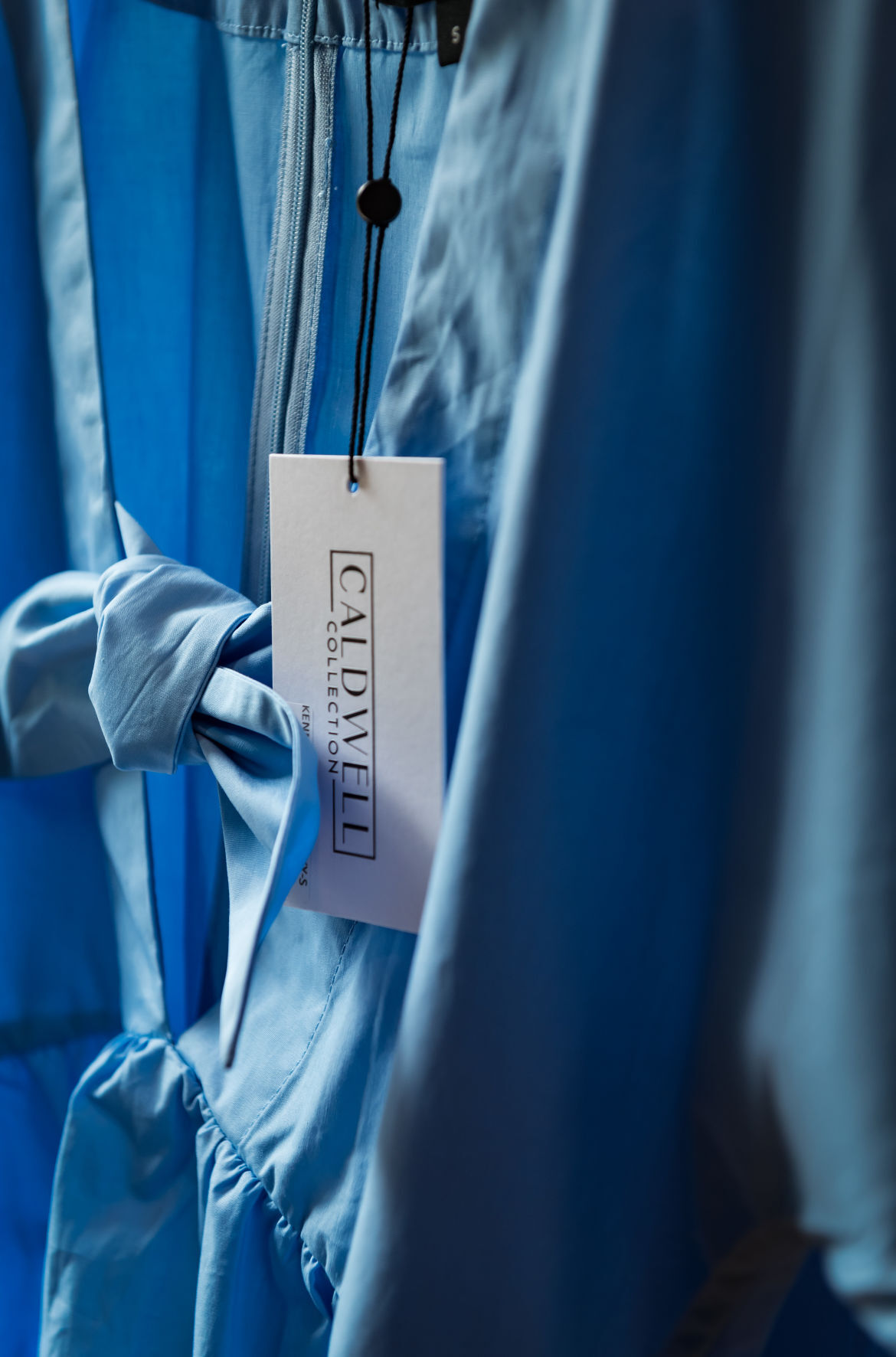 A Kennedy Tie Front Top from The Sky Blue Collection from Lisa Jeffries Caldwell and her daughter, Lauren Caldwell Lea. 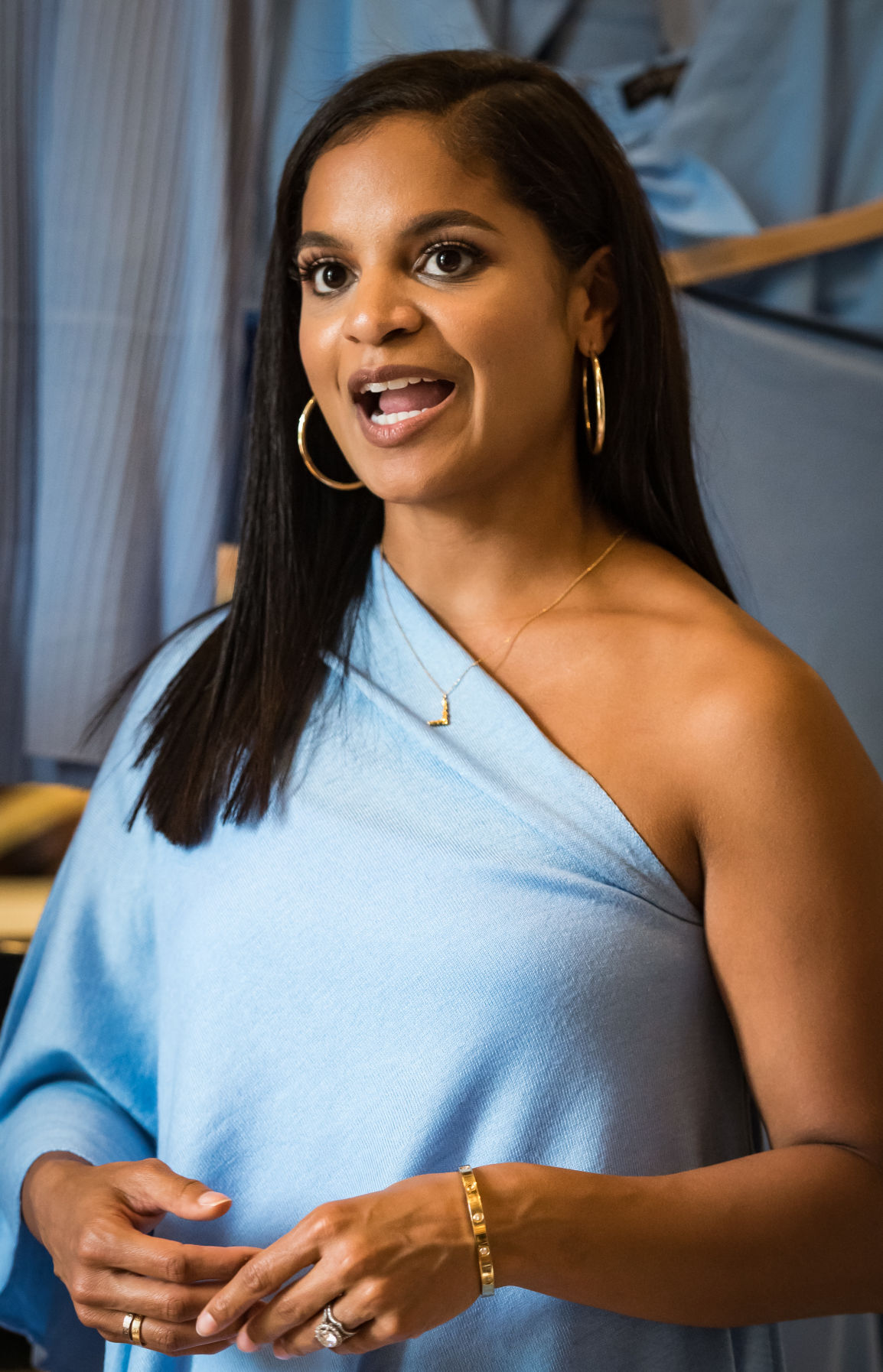 speaks about her and her mother, Lisa Jeffries Caldwell’s new women’s clothing line. 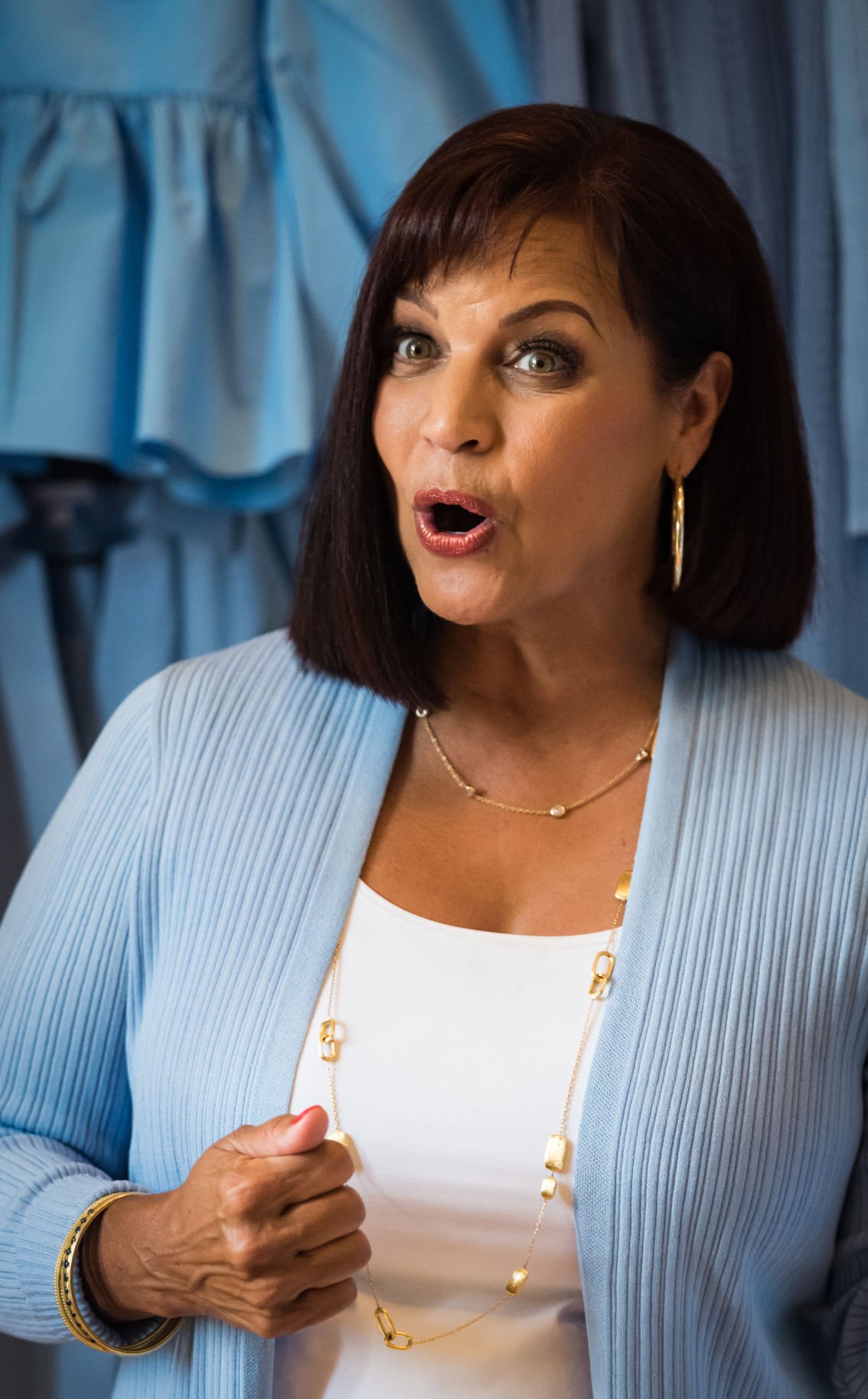 Tops from The Sky Blue Collection from Lisa Jeffries Caldwell and her daughter, Lauren Caldwell Lea.

A Kennedy Tie Front Top from The Sky Blue Collection from Lisa Jeffries Caldwell and her daughter, Lauren Caldwell Lea.

speaks about her and her mother, Lisa Jeffries Caldwell’s new women’s clothing line.

An unsuccessful search for a nice leather jacket in Carolina blue about 10 years ago helped inspire a former Reynolds American executive and her daughter to start an online store called the Caldwell Collection that’s based in Winston-Salem.

“When we go to games, we want to wear something cute,” Lisa Jeffries Caldwell, the chief executive of Caldwell Collection LLC, said. “We don’t want to wear the boxy T-shirt with the logo.”

The leather jacket in Carolina blue that Caldwell had been looking for years ago was for a bowl game.

While at the game, she and her daughter Lauren Caldwell Lea, the chief marketing officer for Caldwell Collection LLC, saw a Tennessee fan wearing an orange leather jacket just like the one she had been searching for.

“We looked at each other and we were like, “This is the business we should start,” Caldwell said.

She said the difficulty she and her daughter experienced every year trying to find clothing in Carolina blue made them realize there was a market for nice clothes in hard-to-find team colors for fashionable sports fans.

The mother and daughter duo recently introduced their first line of clothing — The Sky Blue Collection — on their company website at thecaldwellcollection.com. They started presales April 15 and are now shipping items to customers.

The fact that Caldwell and Lea are both UNC Chapel Hill graduates and collegiate cheerleading alums of the university probably influenced their decision to start with a light blue collection, Caldwell said.

“But we chose a version of light blue that would work for more than just Chapel Hill fans,” she said. “Graduates and fans of Columbia University, Spelman College, and the Tennessee Titans, to name just a few other schools and teams, will find that the Sky Blue Collection aligns with their team colors.”

The Shannon Tie-Dye Poncho can be styled eight different ways.

The Sky Blue Collection is just the beginning for their online store. Plans are to add more colors.

“We’re not doing the exact school Pantone but we’re trying to pick Pantones that allow us to broaden the reach,” Caldwell said. “Otherwise, if you’re going to do a Pantone for every school, that’s very costly.”

Lea called the collection a cross-generational line that is versatile and designed for everyone.

“The clothes are designed to be layered and can be dressed up and down to suit all occasions,” Lea said. They are classic, but also stylish, so they are fun but can be worn for more than one season.”

While some pieces in the collection are made overseas, the majority is manufactured in the United States.

The clothing that Caldwell and Lea designed themselves is being made in the Garment District in New York.

“We would love to find some manufacturers in North Carolina if we could find them,” Caldwell said.

Caldwell Collection LLC has used the services of other North Carolina companies such as Capture Public Relations & Marketing and Carswell Distributing Co. in Winston-Salem, and Directions USA, a model and artist management company in Greensboro.

Lea said they are pleased with the response they have received from consumers so far. “Even though we launched in COVID, we’ve seen so much support from our online community and new consumers about wanting these clothes for work or for a cocktail or for other types of mixers, not just because they are Carolina fans or a Spelman graduate,” Lea said.

Caldwell and Lea are not the only family members — all of whom are avid sports fans — at Caldwell Collection LLC.

Tyler Caldwell, the company’s chief financial officer, is Caldwell’s son. He played football for UNC Chapel Hill and now lives in Dallas, Texas. He is a director of finance for Frito-Lay North America, a subsidiary of PepsiCo. He has a bachelor’s degree in business administration from UNC Chapel Hill and a law degree and master’s degree in business administration from Wake Forest University.

Lisa Jeffries Caldwell lives in Kernersville. In March 2018, she retired as executive vice president and chief human resources officer at Reynolds American, R.J. Reynolds Tobacco Co. and RAI Services. She was one of the first African Americans to rise to that senior executive level in the companies’ histories.

She is a member of the Executive Leadership Council, the board of directors for Triad Business Bank and the central selection committee for the Morehead-Cain Foundation. She has a bachelor’s degree in business administration from UNC Chapel Hill and a law degree from Wake Forest.

Lea, who grew up in Winston-Salem, now lives in Houston, Texas. She works in marketing in the oil and gas industry. She also shares fashion, beauty and fitness tips on her Instagram blog. She earned a bachelor’s degree in business administration with a concentration in marketing from UNC Chapel Hill.

Lisa Jeffries Caldwell’s husband, Alan Caldwell, is supportive of the other family members in their business and helps when needed. He also played football for UNC Chapel Hill as well as professionally for the Los Angeles Rams and the New York Giants.

Caldwell said she and her daughter grew up with a sense of fashion, saying it came from her mother, the late Pauline Jeffries.

Jeffries, along with her daughter, Carolyn Bowden, and her sister, Isabella Jeffries, started a woman’s clothing business.

“Then they morphed into a bridal and formal wear shop before they closed,” Caldwell said.

A blazer in The Sky Blue Collection is named after her mother.

“This is a piece that we felt was so dear to our line and our collection and represented so many women,” Caldwell said.

Caldwell has always wanted to be an entrepreneur, even when she was in what she calls her dream job at Reynolds American.

When she and her daughter came up with the idea for their online store 10 years ago, Caldwell said she was too busy. After she retired, she took a year off.

Then she thought about what she used to tell young women that she mentored: “A dream is always a dream unless you do it. You’ve got to do it.”

“We decided in July of last year to do it,” Caldwell said.