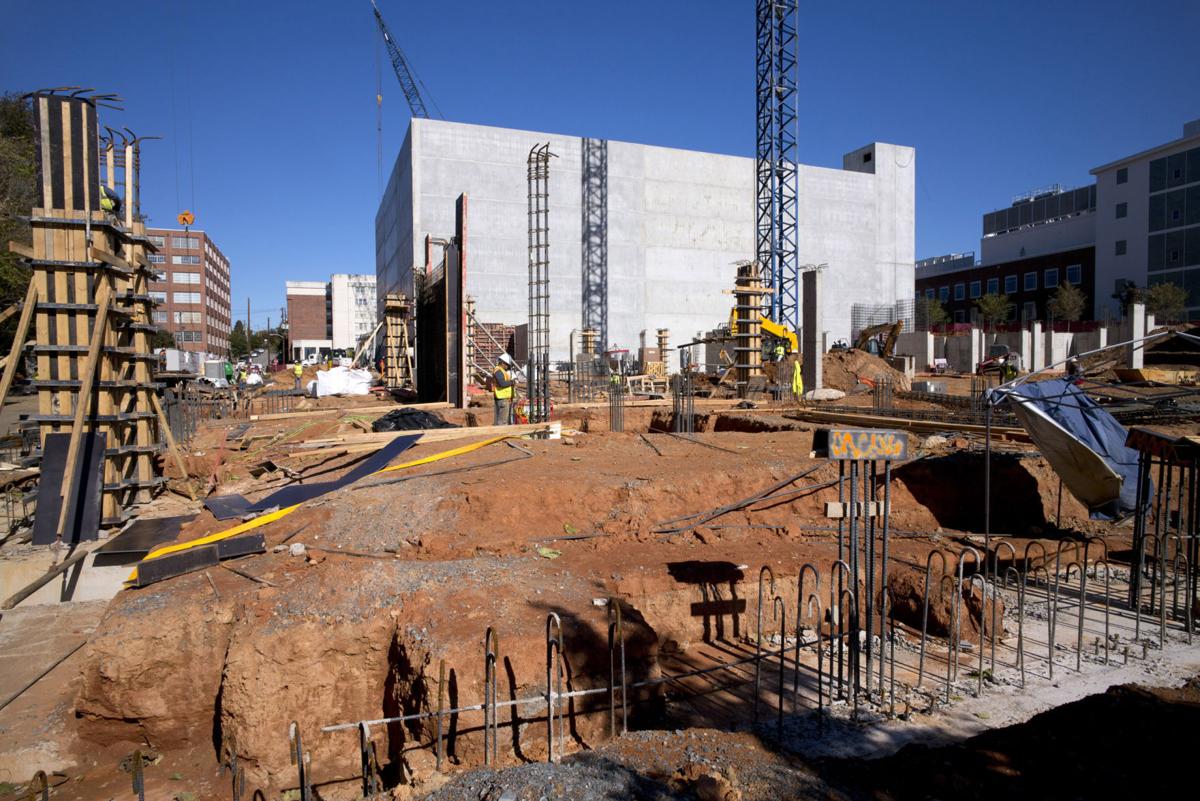 Construction continues on the new Link apartments and parking deck on Fifth Street in the Wake Forest Innovation Quarter. 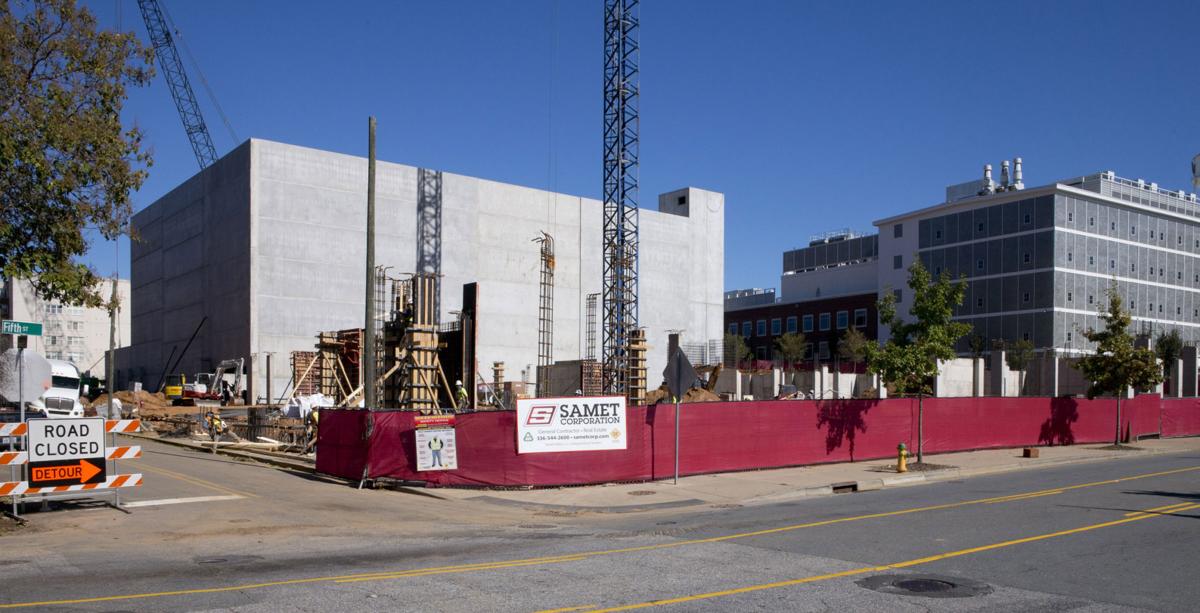 Construction of the new Link apartments and parking deck on Fifth Street in the Wake Forest Innovation Quarter. 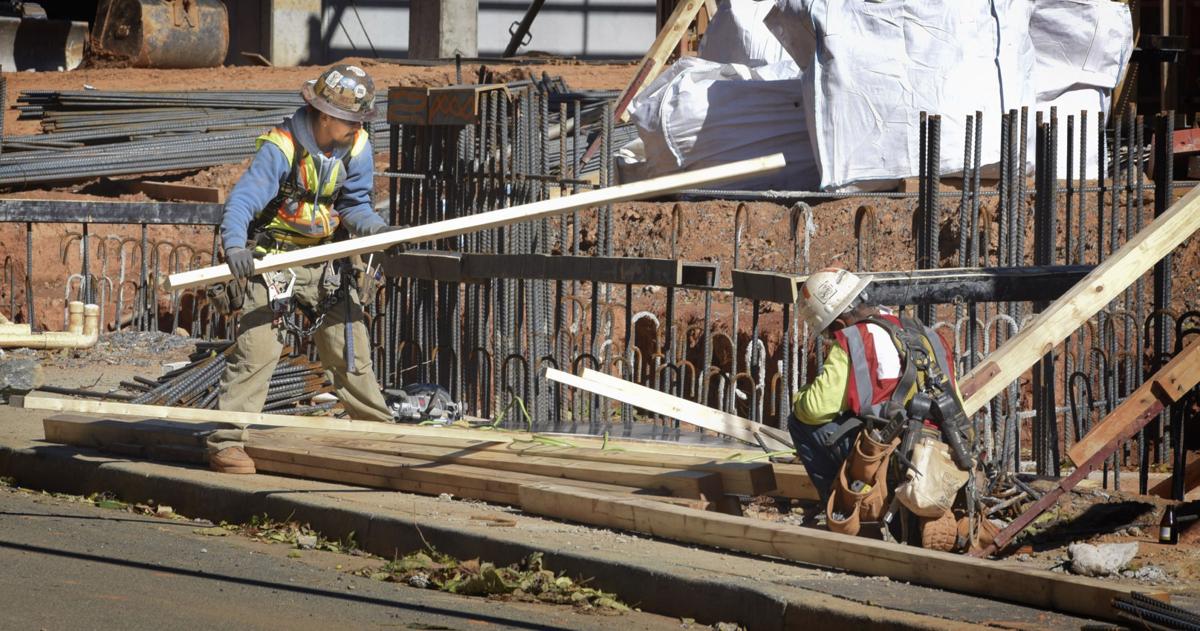 Construction workers at the new Link Apartments in the Innovation Quarter. 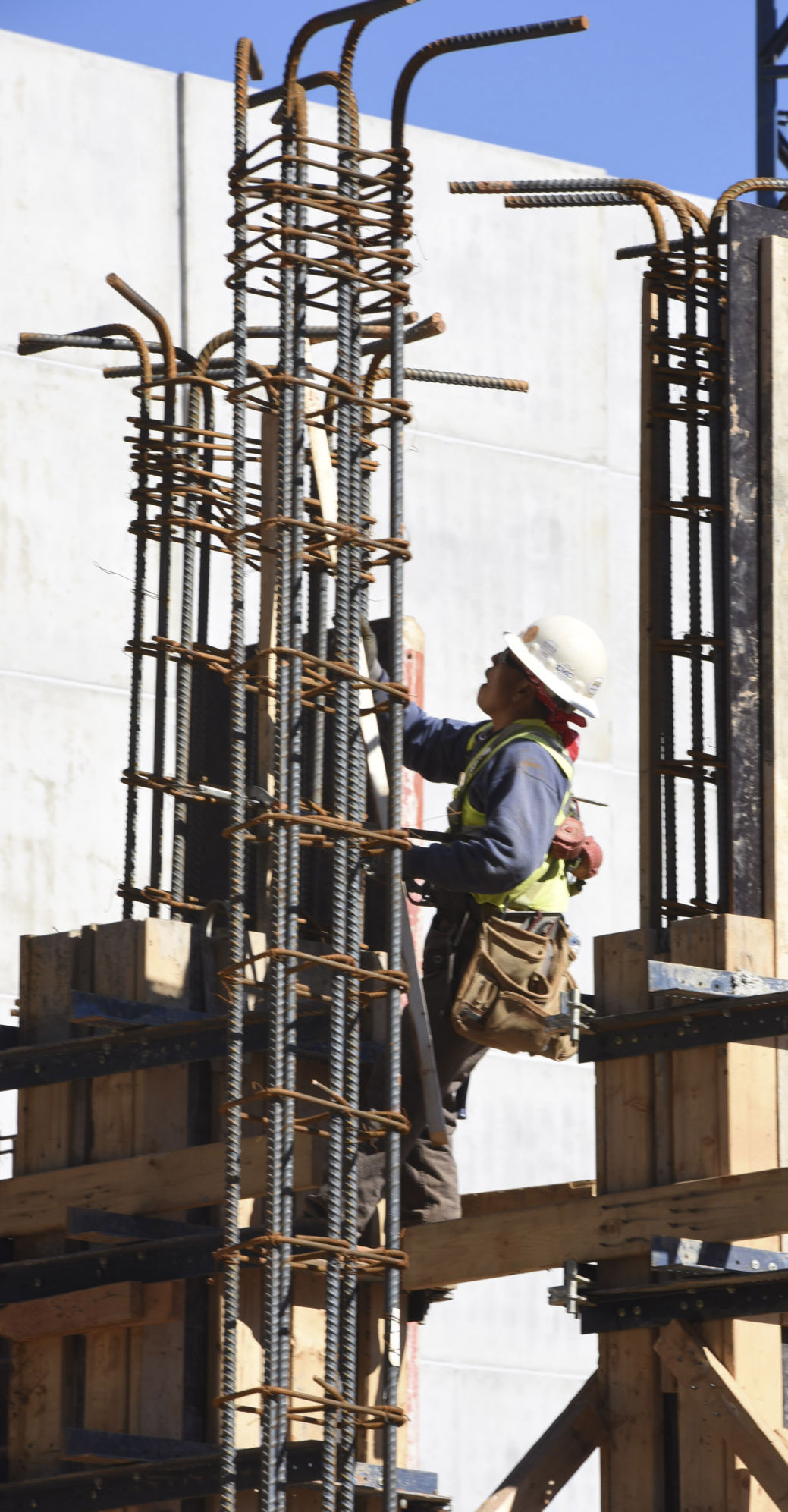 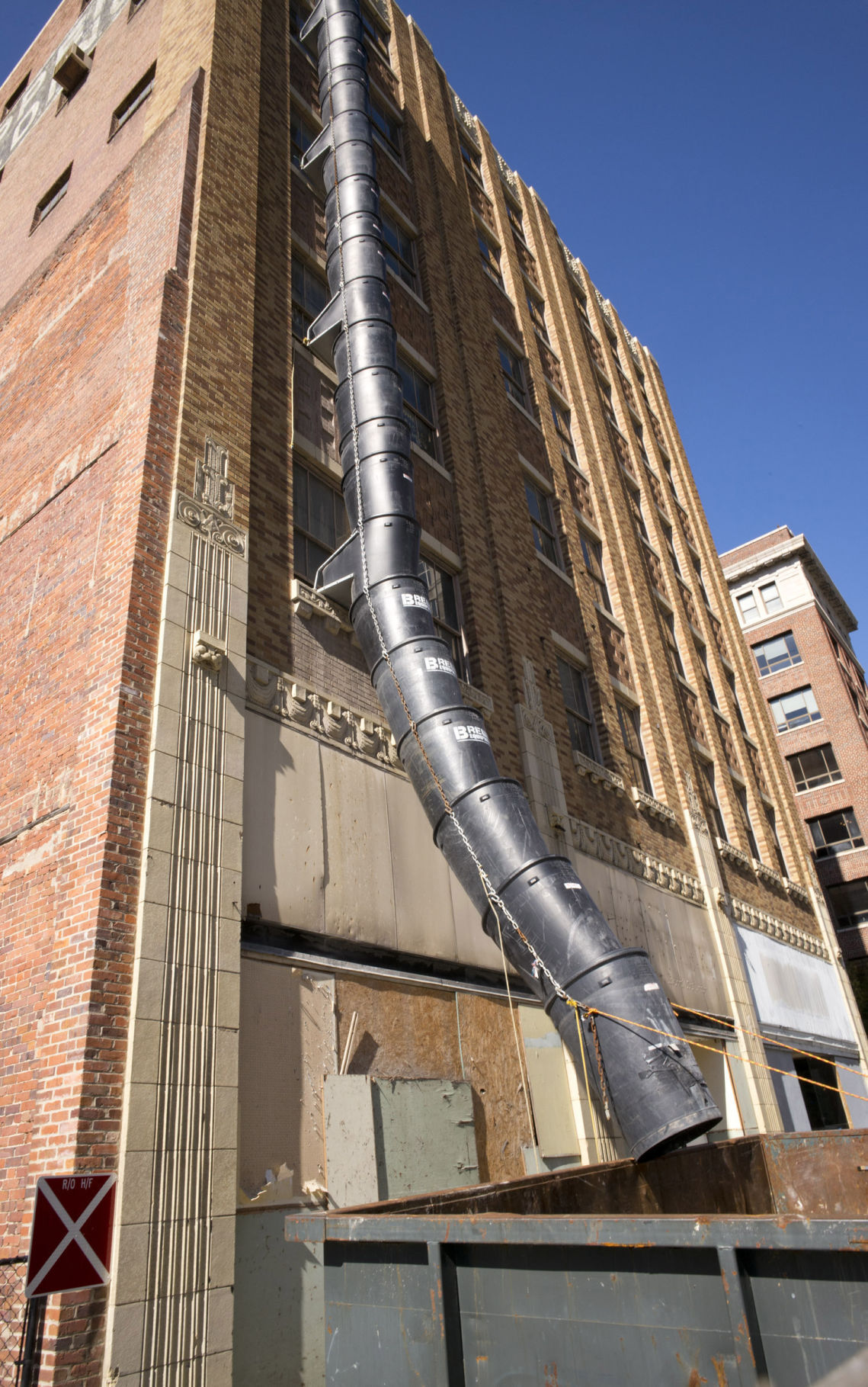 Renovation of the Pepper Building at Fourth and Liberty as it’s converted into the Indigo Hotel. 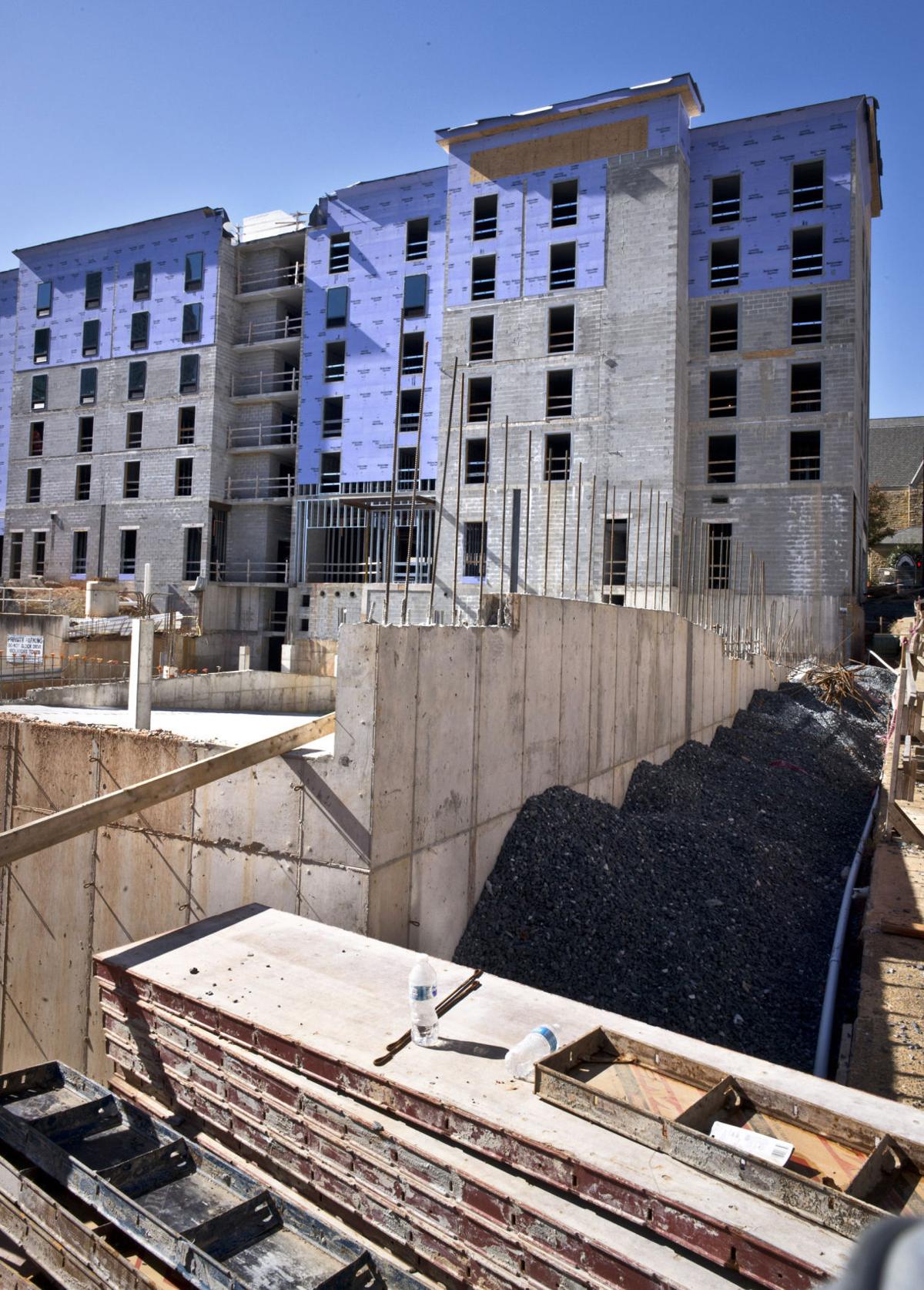 Construction of a new Hampton Inn on North Cherry Street.

The revitalization of downtown Winston-Salem — with more than $1.5 billion spent since 2000 — is nearing a critical mass tipping point.

Expansion in one area, say housing and hotels, is having a spillover effect into other areas, such as retail, restaurants and amenities.

Some downtown observers have said for years they believe revitalization will have arrived once a grocery-store chain opens an outlet to serve the 3,837 housing units. Publix made such an announcement Thursday for downtown Raleigh as part of a multipurpose project.

Until then, here are some of the recent downtown Winston-Salem revitalization examples:

“Downtown Winston-Salem has become a very attractive place to live and do business,” said Mark Vitner, a senior economist with Wells Fargo Securities with a focus on the N.C. economy.

“The arrival of new hotels and restaurants has provided the critical mass needed to get the region noticed by prospective new employers.

“Businesses are increasingly looking for locations that have a certain charm and buzz to them, particularly if it enhances the ability to attract and retain younger college-educated workers.”

Michael Walden, an economics professor at N.C. State University, had a chance recently to observe the revitalization effort firsthand when he came downtown to deliver a presentation to the N.C Manufacturers conference.

“I was very impressed with the positive changes in the downtown,” Walden said.

“It is still relatively small compared to other cities, but for companies looking for a mid-sized city location with good access, Winston-Salem certainly can be an option.”

Investments downtown from 2000 to 2016 total about $1.5 billion, according to a study by Winston-Salem/Forsyth County Planning and Development Services. The data is based on city and county building permits for the same period.

About half that amount — at least $713 million — has been spent in the nearly 200-acre research park, an enterprise of Wake Forest Baptist Medical Center. The Innovation Quarter was conceived as a place where people can work, live, learn and play.

Jason Thiel, president of Downtown Winston-Salem Partnership, said he views the revitalization initiative as a continuing effort to “raise the bar for our downtown community.”

Although 81.7 percent of the downtown residential units are rental properties, Thiel said that “more housing units will increase demand for more businesses downtown.”

The research park project is considered as “the largest private development ever of residential apartments in downtown Winston-Salem,” Eric Tomlinson, president of Wake Forest Innovation Quarter, told the Winston-Salem Journal in October 2016.

“The continued rapid growth of Wake Forest Innovation Quarter has created demand for more housing, more retail and more parking. This project is one of many steps in our efforts to meet that demand.”

Meanwhile, Hospitality Ventures Management Group of Atlanta is planning to spend $20 million on buying and renovating the 316-room Marriott and the 150-room Embassy Suites. The investment is related to the $17.5 million upgrade to Benton Convention Center, which Hospitality manages for the city.

“My sense is that the impressive redevelopment of downtown Winston-Salem, beginning with projects like the transformation of the R.J. Reynolds buildings, including the Kimpton Hotel and the Indigo Hotel in the Pepper Building, are becoming a story line of national interest,” said John H. Boyd, a principal in The Boyd Co. Inc., a New Jersey site-location consulting company.

“Downtown redevelopment and historic preservation is growing as a trend coast to coast, with it being leveraged in Winston-Salem in such a marvelous fashion.”

A city of Winston-Salem report says that parking decks have always been seen as “a tool to leverage major development in the community.”

The Link Apartments complex in the research park, with an 850-space parking deck a key component, is proof of that concept.

An existing parking lot played a key role for the Courtyard by Marriott hotel project, which is being built between Foothills Brewery and the 730-space Center City West parking deck.

It’s a section of downtown that has experienced, until recently, limited economic-development progress in the revitalization spree compared with the heart of downtown and the blossoming of Wake Forest Innovation Quarter.

There was a brief spark of hope in 2003 when Krispy Kreme Doughnuts Inc. was going to be the anchor for Unity Place — an office, entertainment, arts and residential development stretching from Broad Street to Brookstown Avenue and from Second to Fourth streets. Another key element was going to be an IMAX theater.

However, by 2005, corporate, financial and regulatory troubles at Krispy Kreme had basically put an end to Unity Place.

A bright spot has been 751 W. Fourth St., where Winston-Salem Foundation is an anchor in a 55,000-square-foot building at the corner of Fourth and Broad streets. Plans were unveiled July 21 for a $35 million luxury apartment complex between Brookstown Avenue and Green Street.

Another economic shot-in-the-arm came in 2016, when TW Garner Food Co. moved its headquarters to a 14,500-square-foot site in the Nash-Bolich building on Fourth Street.

When Winston-Salem embraced the brand of City of the Arts and Innovation, Garner officials said they took it as a challenge to blend its Texas Pete product innovations with its planned downtown headquarters. They met that goal by featuring a culinary test kitchen on the main floor.

Reece said his group continues to explore a second office building — across the street from 751 W. Fourth down Broad — that could be a $12 million project.

“I think the development of 751 West Fourth was an example of a successful attempt at progress for this submarket,” Reece said.

“The new county library, QB and Springhouse restaurants, upgrades at the Center City West Parking facility, Garner Food’s new headquarters, opening of Bookmarks and a number of new tenants in the Nash Building all represent successful attempts at progress.”

After spending $6.15 million to buy the property, Flow 500 West Fifth LLC has pledged to spend $10 million on upgrades to the former GMAC building.

Flow Automotive Cos. will take 90,000 square feet of office space, where it will have a workforce of 140.

Among the new uses besides consolidating Flow Automotive offices are providing start-up and early-stage companies with affordable space as well as dedicating 17,500 square feet toward a nonprofit business accelerator organization called Winston Starts, a nonprofit corporation headed by Steve Lineberger.

“Our goal is to fill the building with vitality and young people who want to start companies, who want to take risks, and want to imagine a different future,” Flow said during an Oct. 26 presentation to the Downtown Winston-Salem Partnership.

On the downtown wish list for Gayle Anderson is “more condos downtown, in addition to the apartments, to offer more options for downtown living.” Anderson plans to retire in December as Winston-Salem Chamber of Commerce’s president and chief executive.

“I would like to see continued work to do infill development projects between the central business district, Goler, West End, Crystal Towers and Boston Thurmond neighborhoods,” she said.

Thiel said his wish list would include “neighborhood-supporting retail, such as grocery stores, dry cleaners as well as more entertainment venue options.”

Boyd said the use of historic tax credits, particularly in Wake Forest Innovation Quarter, has been so successful in Winston-Salem that other North Carolina cities, such as Asheville, Durham and Hickory have gone to school on the success Winston-Salem is enjoying.”

Boyd said that beyond the brick and mortar aspects, “the turnaround of downtown Winston-Salem has a ‘re-branding’ effect on the city as an innovative community in-tune with the growing attractiveness of the downtown setting as a place to work, live and play — especially in the eyes of the coveted millennial market.”

Investments downtown from 2000 to 2016 totaled about $1.5 billion, according to a study by Winston-Salem/Forsyth County Planning and Development Services.

The data is based on city and county building permits for the same period.

The study breaks out the investments, which include completed, under way or committed projects, into eight categories. Total investments were:

* $100.1 million for commercial properties; and

Face your financial anxiety by reframing your relationship to money

How to cut the cost of preventative care

How to cut the cost of preventative care

These are the best tips and tricks for donating to charity

These are the best tips and tricks for donating to charity

How to make room for fun in your monthly budget

How to make room for fun in your monthly budget

Construction continues on the new Link apartments and parking deck on Fifth Street in the Wake Forest Innovation Quarter.

Construction of the new Link apartments and parking deck on Fifth Street in the Wake Forest Innovation Quarter.

Construction workers at the new Link Apartments in the Innovation Quarter.

Renovation of the Pepper Building at Fourth and Liberty as it’s converted into the Indigo Hotel.

Construction of a new Hampton Inn on North Cherry Street.