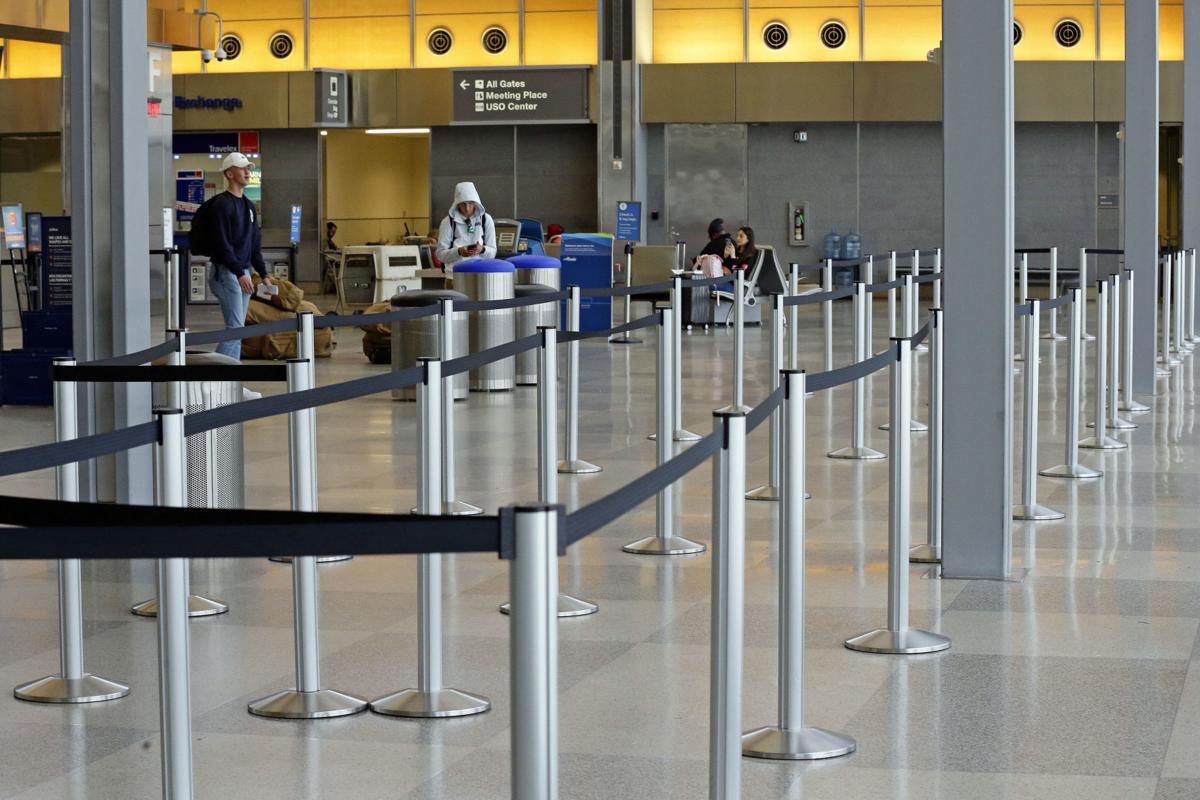 A check-in area at the Raleigh Durham International Airport in Raleigh is mostly void of travelers Tuesday. The coronavirus has impacted travel throughout much of the world as flights have been canceled or delayed. 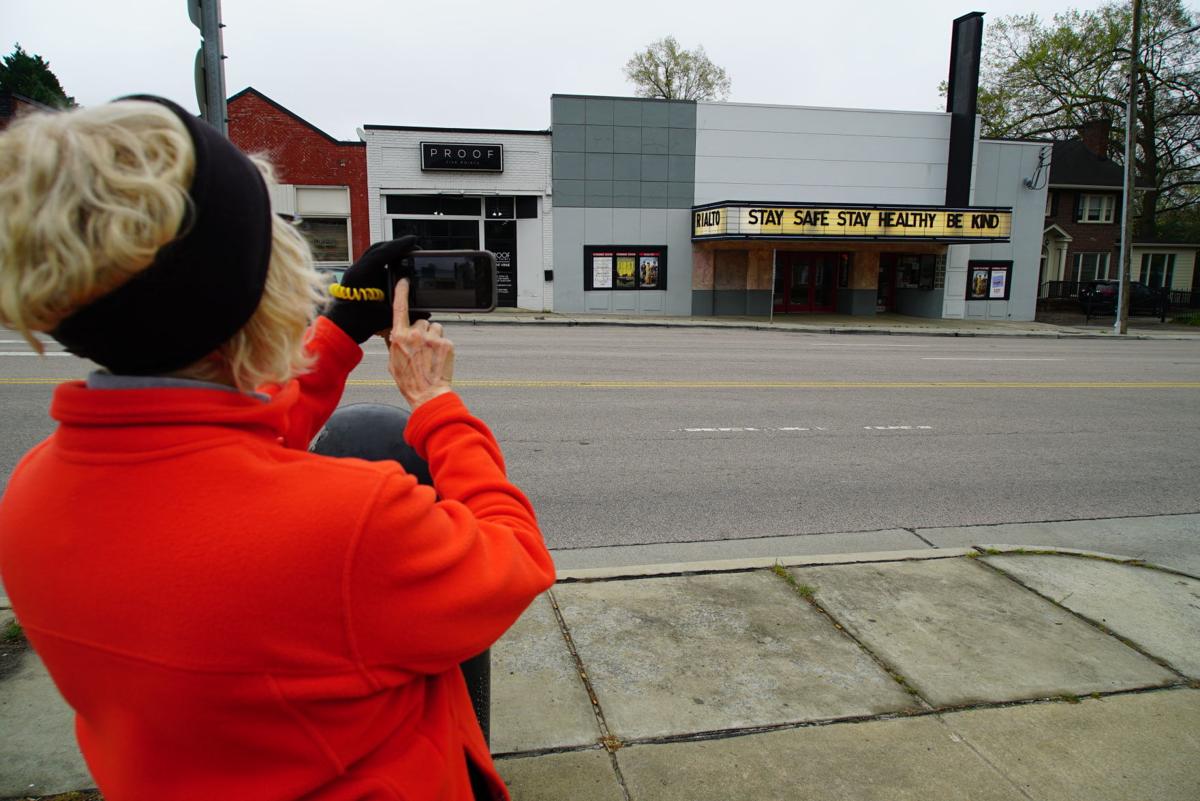 Linda Silber takes a photo of the encoring message on the marquee of the Rialto Theater in Raleigh on Tuesday. Silber is part of a movie club that meets at the theater regularly, but it, like most other businesses, is closed due to the COVID-19 outbreak. 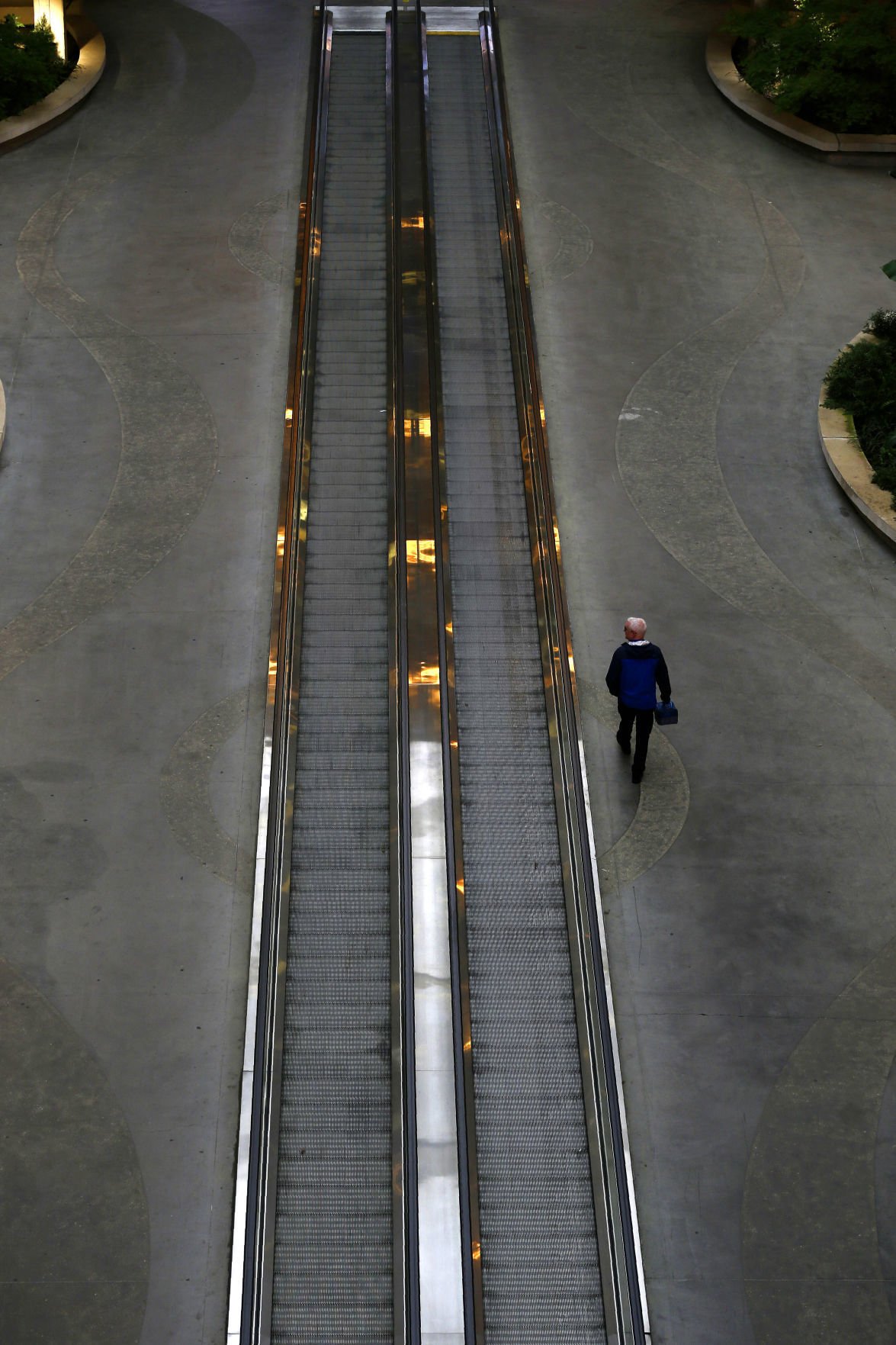 A person walks March 24 through a mostly deserted parking garage at Raleigh Durham International Airport in Raleigh. The coronavirus has impacted travel throughout much of the world. 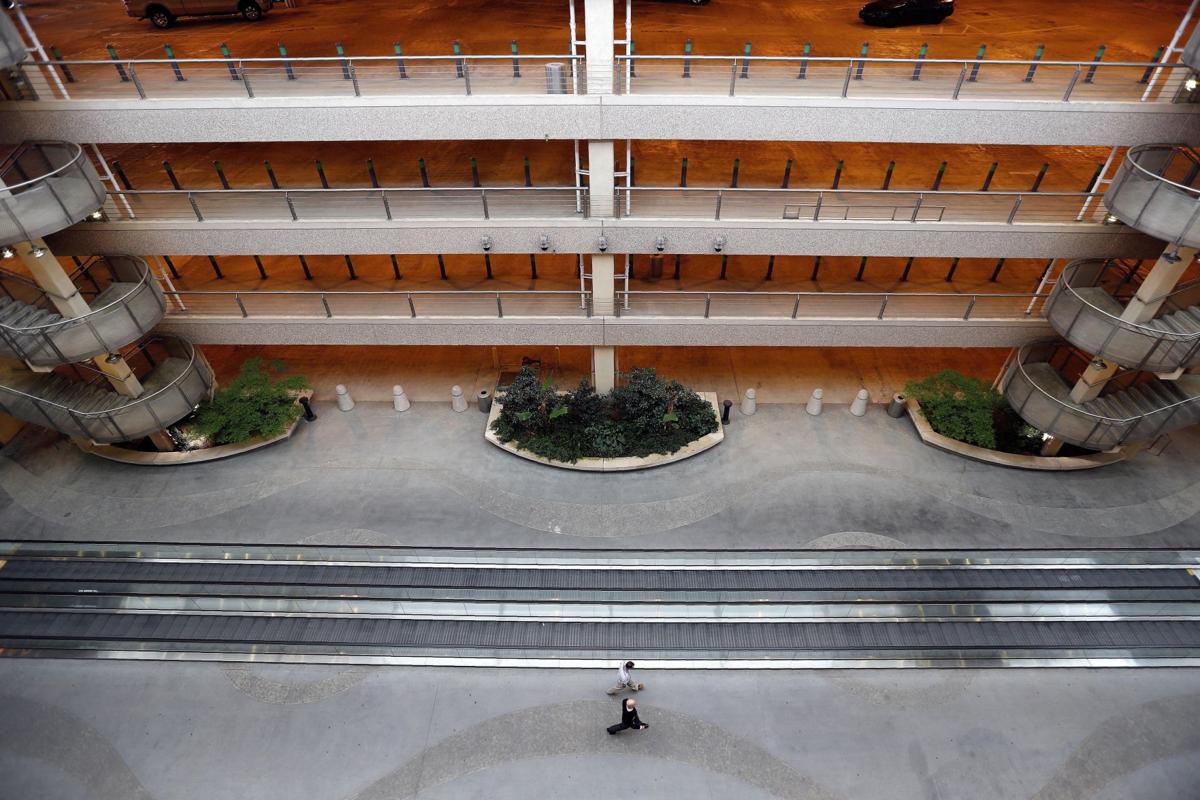 People navigate a deserted parking area at Raleigh Durham International Airport in Raleigh Tuesday. The coronavirus has impacted travel throughout much of the world leaving many airports void of travelers as many flights are delayed or canceled.

Will it double? Triple? Reach a sobering and mind-blowing level?

The state’s jobless rate for February was 3.6%, the N.C. Commerce Department reported Friday.

When the state’s April rate is released on May 22, the odds are high it could be at a level that only those who lived through the Great Depression have ever experienced.

Economists are projecting a range of 8% to 12% for the April rate, and that’s likely to be topped in the months to come.

By comparison, the rate reached a 33-year peak of 10.9% in 2010 as the state and national economies began their slow recoveries from the Great Recession. The Triad peak was 11.5% in February 2009.

Economists forecast that as many as 2.5 million North Carolinians may be at high- or moderate-risk for a layoff or reductions in wages, tips and work hours, or for furloughs.

Of the 10 private-sector and government employment sectors, none is expected to be spared massive job losses, but the cuts will likely most acutely affect the lower-wage leisure, hospitality, manufacturing and retail categories.

Among those likely filing claims over the past 10 days are about 500 Lydall Inc. employees temporarily laid off in Yadkin County, more than 200 Gildan Activewear Inc. workers temporarily laid off in Mocksville, and thousands of local leisure, hospitality and retail workers whose employers have shut their doors or dramatically reduced operating hours and how they serve customers.

Michael Walden, an economics professor at N.C. State University, said the unemployment surge in the coming months will likely differ from what North Caroliniains remember from the Great Recession.

“The difference is, it will come very quickly — within months — rather than over years with the Great Recession.

“So, the shock will be bigger.”

Unfortunately, the April employment report will represent just the confirmation of a COVID-19 infection cycle that began being felt in earnest March 11 and has grown increasingly worse each day since.

Because the U.S. Labor Department collects employment data during the week that contains the 12th of the month, the state, metro and county rates for February and March won’t reflect the enormity of the rate surge.

For example, there were 3,533 claims for the week that ended March 14, according to U.S. Bureau of Labor Statistics data.

Unfortunately, the March 21 claims already have been surpassed by this past week’s numbers of more than 152,000 as of Saturday morning. That included 26,435 claims filed just on Friday.

The odds are also high that the March 28 claims won’t stand as the peak either.

By comparison, a 12% jobless rate today would represent about 613,000 unemployed North Carolina out of 5.11 million in the labor force.

“The quarantine of about three-fifths of Americans, either voluntarily or by mandate, has led to a sudden stop in economic activity across the country,” S&P said.

“That has left the U.S. grappling with possibly the largest economic contraction on record and the highest unemployment rate on record, going back to 1948.

Daniel Kuehn, who blogs for The Urban Institute, fears that a COVID-19 recession will be longer lasting and harder to recover from because it is becoming the first “services recession.”

“Consumer spending on services, like dining out, transportation services or personal care service, typically fluctuates much less over the business cycle, acting as a source of economic stability during recessions,” Kuehn said.

Because COVID-19 social distancing is causing service workers to be laid off, get sick or stay home from work, “services cannot generally be produced for future use.”

“If I stay in my home and skip my usual haircut, that service cannot be produced now and stored in inventory for the future.”

“Policymakers should work to prevent widespread economic hardship, but a revival of services could weaken efforts to slow the spread of COVID-19. As a result, none of the options look good.

“COVID-19 calls for a balancing act between public health and macroeconomic stability that has no recent precedent, and policymakers need to be prepared.”

The unemployment rate, like the stock market, is relied upon and touted as a measuring stick for how the local, state and national economies are performing.

An email sent from a federal official to state officials “said jobless claims are closely watched by policy makers and financial markets” and “asked states to keep the numbers embargoed,” the Wall Street Journal reported.

The N.C. Commerce Department has been providing at least daily updates since March 16.

The state jobless rate has remained below the 5% threshold since January 2017.

That’s the level most economists consider as representing full employment — the economic point at which everyone who wants a job has one, employers have the skilled workers they need, and there is limited inflationary pressure on wages.

Yet most economists say the job market was challenging enough pre-coronavirus for individuals without the technical and other specialized skills needed in advanced manufacturing jobs.

Individuals without jobs who are not looking for work are not considered unemployed.

The labor force data does not distinguish how many workers are full time, temporary or part time, or how many jobs individuals are working.

The federal labor-statistics bureau’s U6 index includes those categories. The U6 index rate for North Carolina was 7.3% on Dec. 31, compared with 7% nationally on Feb. 29.

A potential silver lining in the skyrocketing jobless claims is that they have been induced by governmental-ordered flattening the curve social distancing initiatives, rather than plummeting consumer demand, said Mitch Kokai, senior policy analyst with Libertarian think tank John Locke Foundation.

“Unlike the Great Recession, many of the people filing for unemployment benefits today still have jobs,” Kokai said.

“But if the restrictions linger on, the businesses employing these underworked employees won’t be able to keep them.

“The government restrictions will persist as long as the perceived health threat remains,” Kokai said. “So, the length of the health threat will help determine the overall economic impact.”

“With a prolonged closure of businesses through June, we could be seeing record levels of unemployment in the 25%-plus range by then as well,” Madjd-Sadjadi said.

“Remember, people who are collecting unemployment insurance because of reduced hours or because they have lost a second job, but are still employed at their first job, are still considered to be employed for purposes of the unemployment statistics.”

North Carolina and Florida have the lowest number of benefit weeks in the country.

However, because state unemployment benefits are on a sliding scale, the number of weeks can rise up to 20 weeks when the state unemployment rate is 9% or higher — which economists say it is highly likely to be exceeded by either the April or May reports.

However, the sliding scale is only activated twice a year on Jan. 1 and July 1 — both based on the average rate for first three months of a six-month cycle.

That means January through March for the July 1 trigger, and July, August and September for the Jan. 1 trigger.

John Quinterno, a principal with South by North Strategies Ltd., a Chapel Hill research company specializing in economic and social policy, said that because the state “will not see the first real spike in the unemployment rate until April, I wouldn’t be surprised at all if maximum duration stays at 12 weeks for the rest of the year” unless state legislators eliminate the three-month requirement.

Another potential casualty of the coronavirus may end up being the relevance unemployment rate, said Quinterno.

“We really are moving into uncharted territory here, and I think standard economic indicators, like the unemployment rate, are going to be poor guides going forward.

“I expect that even if the unemployment rate were to rise sharply, even into the double digits, it will be understating the extent of the problem.”

Quinterno said the typical UI claimant has been someone who lost a job by no fault of their own, is available for work and had made at least one active effort to find a job during the prior four weeks.

“Given that the labor market more or less is frozen, I can see many people meeting the first two criteria but not the third, meaning they will not be counted as unemployed. “

“After all, if you work in leisure and hospitality, there really isn’t any place you can apply so long as restaurants and the like are effectively shut down.

“So, people who don’t meet the definition of unemployed will no longer count as part of the civilian labor force, which changes the denominator used to calculate the rate,” Quinterno said.

Another factor, Quinterno said, is those drawing state UI benefits while working reduced hours will be subject to payment limitations.

“Someone who has a compensable claim based on reduced hours has their benefit reduced by any amount they earn that exceeds 20% of their benefit amount,” Quinterno said.

He cited as an example that a claimant who qualified for the maximum weekly benefit of $350 would see their benefit reduced for every $1 they earn over $70.

“Unemployment benefits are really going to be meager for most people who do manage to establish a valid claim,” Quinterno said.

The project, called Project Thunderbird, to get $106 million in state grants.

Egger Wood Products has 450 employees in Lexington and plans to add 40 more.

What is Project Thunderbird? Name of company at center of massive PTI project could come early next week.

The project  could bring as many as 1,750 jobs to Piedmont Triad International Airport.

One of the encouraging trends in our society today is that more people are considering charitable gifts during their lifetimes or at their deaths.

6 steps to higher net worth: A year-end financial checklist

Here are six easy-to-implement steps to help boost your net worth going into the new year. Plus, check out more personal finance tips from experts.

A check-in area at the Raleigh Durham International Airport in Raleigh is mostly void of travelers Tuesday. The coronavirus has impacted travel throughout much of the world as flights have been canceled or delayed.

Linda Silber takes a photo of the encoring message on the marquee of the Rialto Theater in Raleigh on Tuesday. Silber is part of a movie club that meets at the theater regularly, but it, like most other businesses, is closed due to the COVID-19 outbreak.

A person walks March 24 through a mostly deserted parking garage at Raleigh Durham International Airport in Raleigh. The coronavirus has impacted travel throughout much of the world.

People navigate a deserted parking area at Raleigh Durham International Airport in Raleigh Tuesday. The coronavirus has impacted travel throughout much of the world leaving many airports void of travelers as many flights are delayed or canceled.