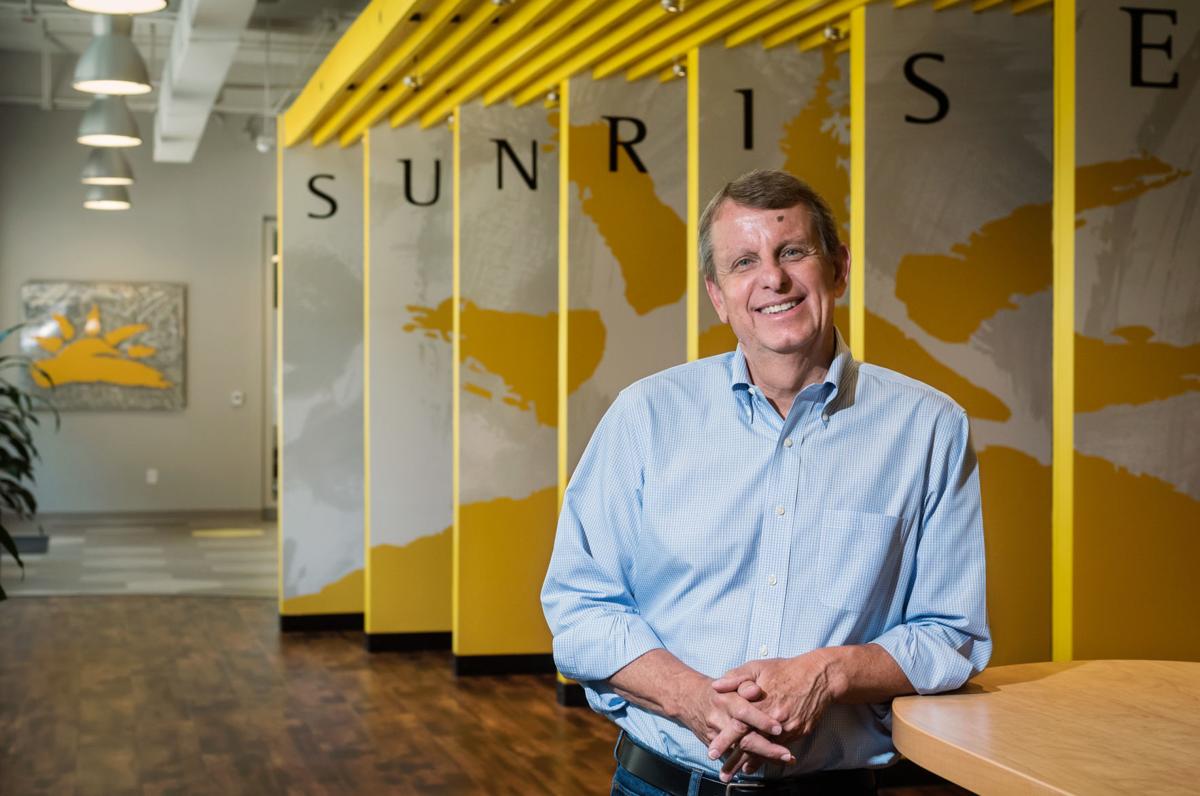 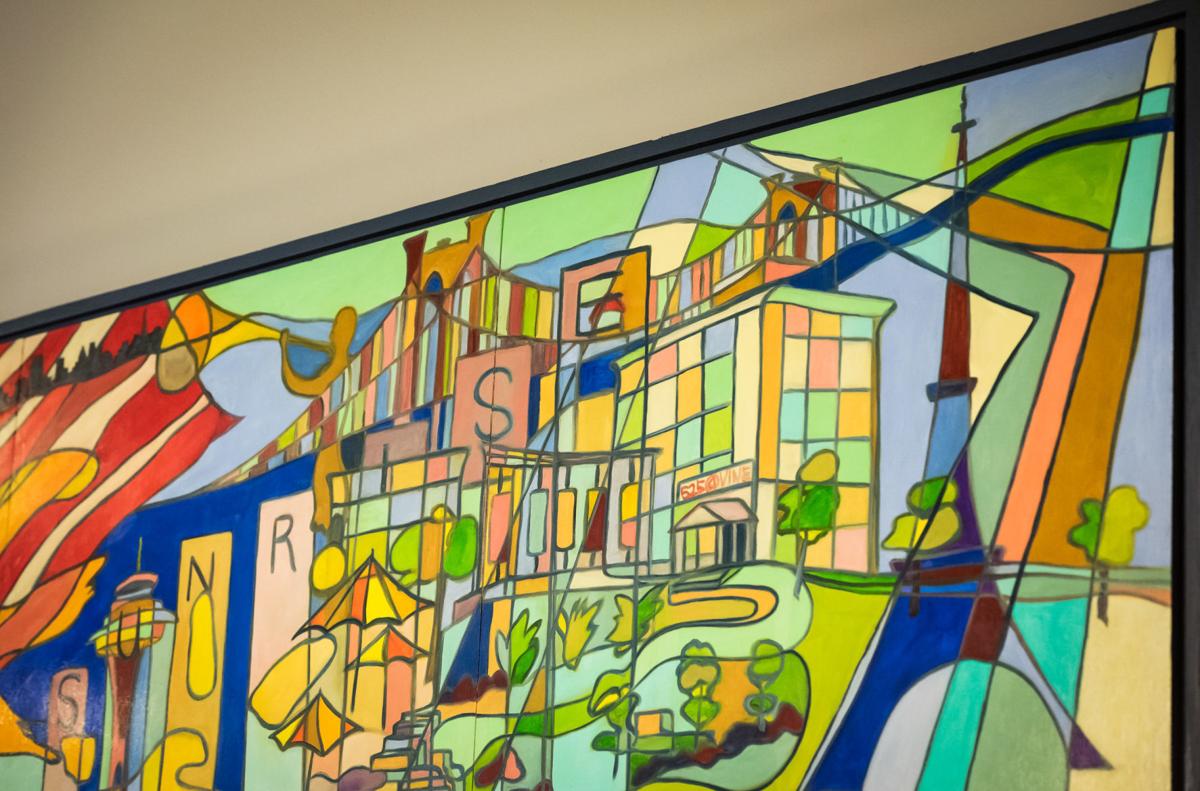 “The Sunrise Technologies Story,” an oil painting by Nicholas Burton Bragg, depicts the history and growth of the company over the past 20 years. 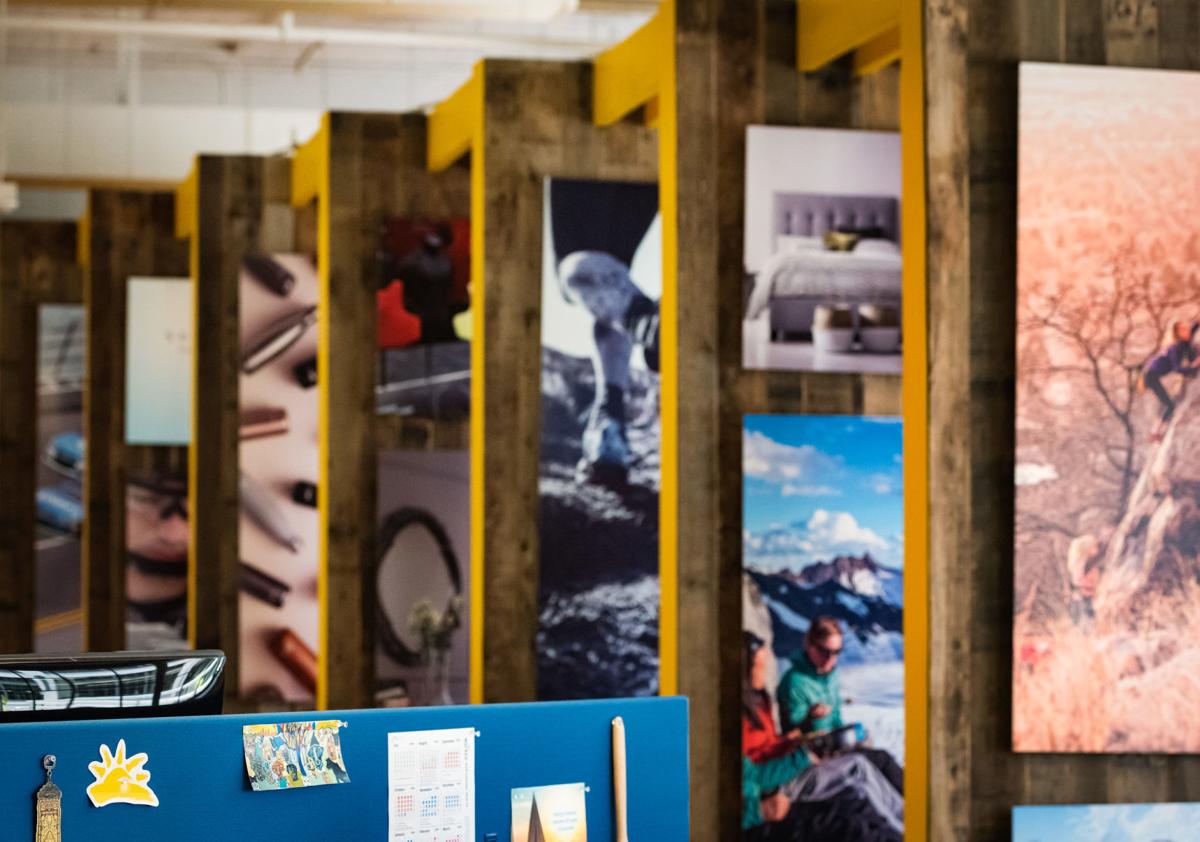 A Sunrise Technologies logo is seen on John Pence’s cubicle in front of columns displaying photographs of clients’ products. 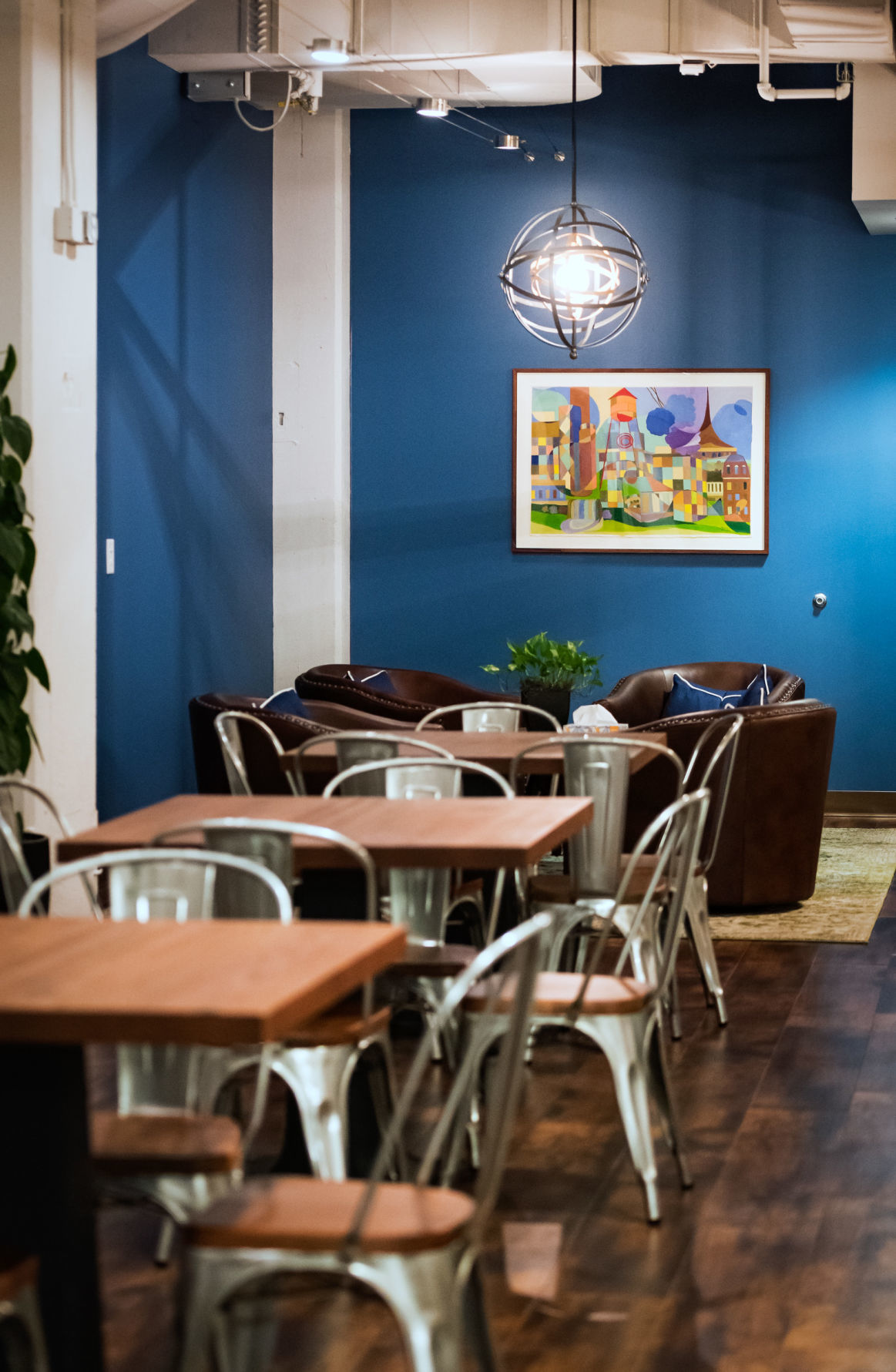 The kitchen area at Sunrise Technologies.

Now that his company Sunrise Technologies Inc. does business nationally and internationally, John Pence said he is often asked the same question, “Why are you in Winston-Salem?”

That question is typically followed by an inquiry as to why he isn’t in some large city like Dallas, New York or Seattle.

Pence’s answer is always the same.

“I’m so glad we are in Winston-Salem,” said Pence, the company’s president and founder. “I feel like the city has been great to us. I think the cost structure of Winston-Salem has really helped us as a business thrive and be successful over the years.”

A lot of Sunrise’s peer companies are in places like New York or Seattle, but he said it is expensive in those cities.

Sunrise, a technology company, celebrated its 25th year in business July 1. The company, which is a Microsoft partner that helps clients implement their business applications in the cloud, recently was named the Microsoft Global Partner of the Year for Dynamic 365 for Finance and Operations.

Janet Kahr, senior NSI partner development manager for Microsoft, said: “Microsoft is very pleased to recognize Sunrise Technologies’ contribution to the success of our mutual customers with the Microsoft Global Partner of the Year for Dynamics 365 for Finance and Operations. Sunrise delivers solutions that transform their customers’ businesses with one strategy that encompasses (Microsoft’s) Azure to analytics to business applications and AI (artificial intelligence).”

Microsoft Azure is a cloud computing service created by Microsoft.

Pence considers Winston-Salem “a great place for a high-tech business,” especially with all the growth in Wake Forest Innovation Quarter, including the development of more urban housing that tends to appeal to millennials.

Sunrise operates out of the 525@Vine building in the Innovation Quarter in space previously occupied by Flywheel LLC.

Heather Essic, chief administrative officer for Sunrise, said the company’s growth has been all organic out of Winston-Salem.

“We haven’t acquired other companies,” Essic said. “John has been the sole founder and owner for all 25 years. He hasn’t had a business partner.”

Pence expects his company to achieve 20 percent growth this year over 2018.

Sunrise primarily does business with manufacturers, distributors and retailers.

Prior to founding Sunrise in 1994, Pence worked for Sara Lee Corp. as its chief information officer for Champion Products.

“I quickly realized that working from the dining room table was not going to work for my family or myself,” he said.

His first office was on Reynolda Road and he hired his first employee about 18 months after starting his business. In 1998, he moved to an office on Stratford Road.

“When that lease expired, we really wanted to come downtown and be part of what then was called Piedmont Technology Research Park on Chestnut Street,” he said.

Pence said he is a huge fan of urban renewal and reusing the assets within a city center.

He also wanted to be downtown for his employees, to provide a place where they could walk to lunch, among other things.

Sunrise operated in a building downtown on Chestnut Street from 2001 to 2017, when it moved into the 525@Vine building in the Innovation Quarter.

For about its first 10 years, Sunrise focused on helping businesses optimize their supply chains, primarily in apparel and textiles.

“We were especially good in helping companies with their manufacturing planning processes and their forecasting processes,” Pence said. “In that era, the apparel industry was really going into the global supply chain model, and we were very good at helping businesses manage that global supply chain. It was a much harder and more complicated thing to do than if all your plants were located within 100 miles of where you are.”

At that time, his company worked with a lot of companies in the Southeast and grew to have about 15 employees in the early 2000s.

In 2003, the company made a big pivot in its business by becoming a partner with Microsoft. Today, Sunrise sells and implements Microsoft Dynamics 365 Solutions, an Enterprise Resource Planning product, known as ERP.

ERP, Pence said, is “software that runs most of the operations of our customers’ businesses.”

That includes managing the manufacturing operations, taking customer orders and seeing them through the shipping process, and running all the financial aspects of customers — billing and invoicing, paying bills and accounts payable.

The company has 228 employees, of which 148 are in the United States, 74 in China and six in Europe. Thirty-six of its workers in the U.S. are in the Triad.

The company’s office in China opened in August 2007, in Xi’an. It is run by Rui Ma, Pence’s sister-in-law. Rui Ma, and Pence’s wife, Heather, grew up in Xi’an, China.

Pence said Sunrise is fortunate to have a lot of long-term employees.

For example, Mike Pereira, vice president of global customer support, has been with the company for more than 20 years; Essic joined 15 years ago; and Barbara McCuiston, the vice president of human resources has been there 13 years.

“It’s a very important thing for us,” Pence said. “We work at trying to have long-term relationships with everyone — our customers, our employees, vendors who help us.”

The toughest time for Sunrise was in 2008 and 2009 during the great recession.

“One of our biggest industries is home furnishings, and they were especially hard hit during that recession,” Pence said. “It was a really challenging time both financially, and especially with a lot of our customers, people cut back on discretionary spending. Big IT projects are certainly discretionary kinds of spending often.”

He said that five customers went bankrupt in about an 18-month stretch.

“Two of them especially kind of hit us with some big unpaid bills and things,” he said.

But he said that Sunrise made it through the recession in great shape without having to lay a single employee off.

“We retained everyone that worked here and came out the other side of that recession in a very good financial situation and really have had a terrific run since the recession,” Pence said.

One of the company’s philosophies is to try to avoid debt throughout the life of the business.

“I think that particularly helped when the great recession hit,” Pence said.

“We have really been incredibly blessed at getting really great people to come work here and then stay here,” he said. “I think that’s led to great work being done for our clients and great customer satisfaction with the clients.”

He said that Sunrise’s employees enjoy working in the Innovation Quarter and some even live downtown and walk to work.

“They’ve turned it into a fun place to work because they’re such great people,” he said. “I think that it’s really why we can continue to get more great people to come work here.”

Sunrise, he said, is a value-driven organization, and its simple values are “honesty, work hard and be nice.”

“We really look for people who have those traits,” he said. “Barbara and her team are really good at ferreting that out and finding people who fit that.”

He said they are fortunate to have long-term relationships with some colleges in the country and those relationships have enabled the company to recruit top students over the years.

Sunrise has also been good at adopting new innovative things and being willing to stay current.

For the company’s first 15 years in business, “the way the internet enabled global supply chain management, was probably profound in what we were able to do for clients because it essentially let you have free networking all over the world that was unheard of 10 years before that,” Pence said. “There was no way to really manage operations all over the world. But the internet enabled that.”

He said he is proud of his company and employees

“I feel like our success is really grounded,” he said. “It’s got very deep roots and those roots are in a very healthy place.”

Bank of America Corp. has announced plans to close its branch at 2899 Reynolda Road in Winston-Salem.

The property location of Riding High Harley Davidson in High Point has been sold for $3.3 million to a High Point group.

Historic Shaffner House sold for $1.2 million. Plans are to add restaurant, give it 'boutique inn' feel.

Lou Baldwin, leader of the ownership team, says remodeling is already under way.

Wells Fargo & Co. has announced plans to close an additional nine branches nationwide, including one in Apex.

A planned UNC School of Medicine branch campus at a Novant Health Inc. facility in Charlotte has gained the backing of a key national medical …

“The Sunrise Technologies Story,” an oil painting by Nicholas Burton Bragg, depicts the history and growth of the company over the past 20 years.

A Sunrise Technologies logo is seen on John Pence’s cubicle in front of columns displaying photographs of clients’ products.

The kitchen area at Sunrise Technologies.