We have all heard of “love at first sight,” but Sadena Hunt knew it was meant to be before she even met Carl Hill.

They had friends who were dating each other, and the four were supposed to get together for dinner at Carl’s father’s barn.

Sadena already had plans for that night, but good friends look out for their pals. Her friend called her after the dinner and promptly told her that she had just met Sadena’s future husband.

“I have been chasing him ever since!” Sadena says.

That barn became incredibly special to this couple. It’s where they met, got engaged and married.

To Sadena, the day of their proposal was likely just like any other date. They enjoyed a wonderful brunch at their favorite dining spot and took a scenic ride on country roads.

Carl suggested they go to the barn on their drive. When they got there, he went around to open Sadena’s door and got down on one knee to propose. The bride fondly remembers crying and repeatedly saying yes.

On Halloween 2020, they said “I do” at the barn, which has been in the groom’s family for many years and was founded by Carl’s grandfather.

At the time of their wedding, Carl’s grandfather, a pillar of strength in their family, was declining due to cancer. Carl felt blessed that his grandfather made it to the wedding.

“What I remember most about that special day is my grandpaw making it to our wedding. We saw him that night, and the last words we heard him say was to my wife: ‘Welcome to the family.’ He passed away the next morning, on All Saints Day,” Carl says. They were also able to toast at the wedding with his grandfather’s homemade wine, which they had enjoyed on the night they met as well.

If you are going to have a Halloween wedding, embrace the day. As this is the bride’s favorite day of the year, she did just that. Sadena was dressed in an exquisite black gown and Carl was also decked out in black attire.

The thing Sadena remembers most of their wedding day was Carl surprising her with her wedding band.

“I remember the photographer telling me the groom had a surprise for me before the wedding,” she says. “A box was placed in my hand, since Carl and I couldn’t see each other before saying ‘I do.’ Inside the box was a gorgeous diamond wedding band Carl surprised me with!”

Sadena knew how important it was to have amazing photos of their wedding and says it was their one splurge item.

“Money wasn’t an object when it came to quality photos,” she says. “Good pictures are priceless, and they help tell the story of that day for people who weren’t able to come due to the pandemic.,

They were able to save and stay within budget by enjoying a simple wedding with their family and closest friends. They also utilized Pinterest, and many wedding details were DIY.

Her advice to future brides is “Don’t let anyone’s opinion change any aspect of how you pictured this day. Also, don’t get lost in all the details and planning that you forget this day is for you and your groom. Everyone and everything else is just a plus!” 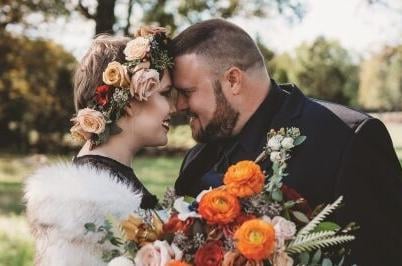 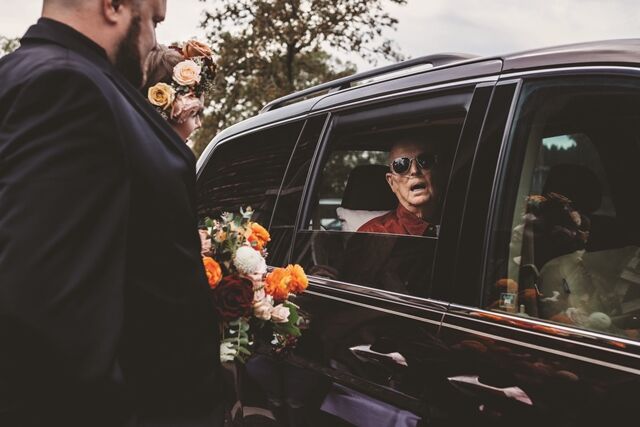 “What I remember most about that special day is my grandpaw making it to our wedding," Carl Hill says. "The last words we heard him say was to my wife, ‘Welcome to the family.’ He passed away the next morning."