Chris Paul takes the game-winning shot against Tim Duncan, a fellow former Wake Forest star, and the Spurs in Game 7 of an NBA playoffs first-round series in May 2015. 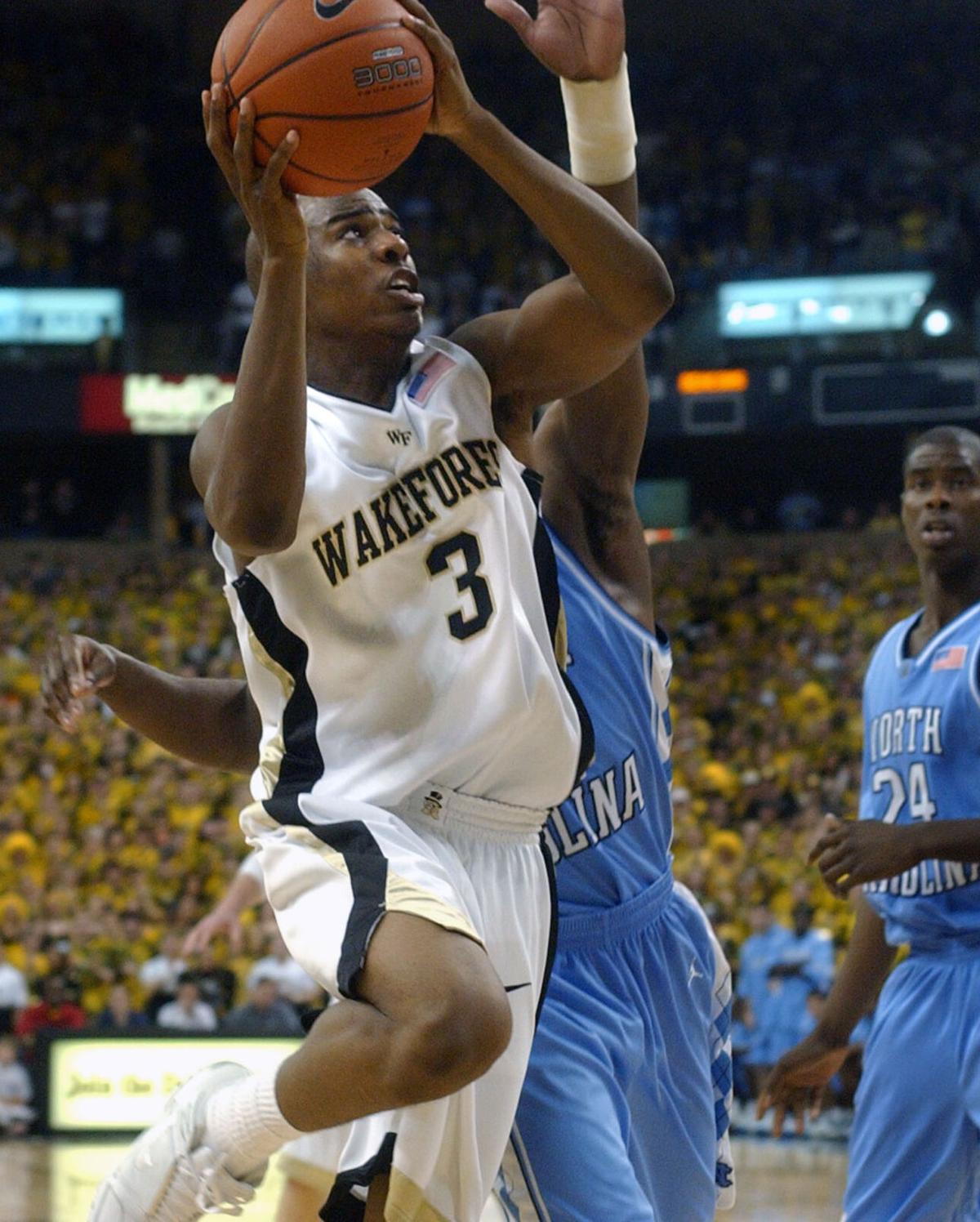 Chris Paul of Wake Forest scoring two of his 26 points against North Carolina during the Demon Deacons’ 95-82 win at Joel Coliseum on Jan. 15, 2005.

Chris Paul and U.S. players—also known as ‘The Redeem Team’—after they defeated Angola in August 2008 at the Beijing Olympics.

Chris Paul helped the Los Angeles Clippers win at least 50 games in five of his final six seasons in L.A.

Chris Paul after being selected in the 2005 NBA Draft by the New Orleans Hornets. 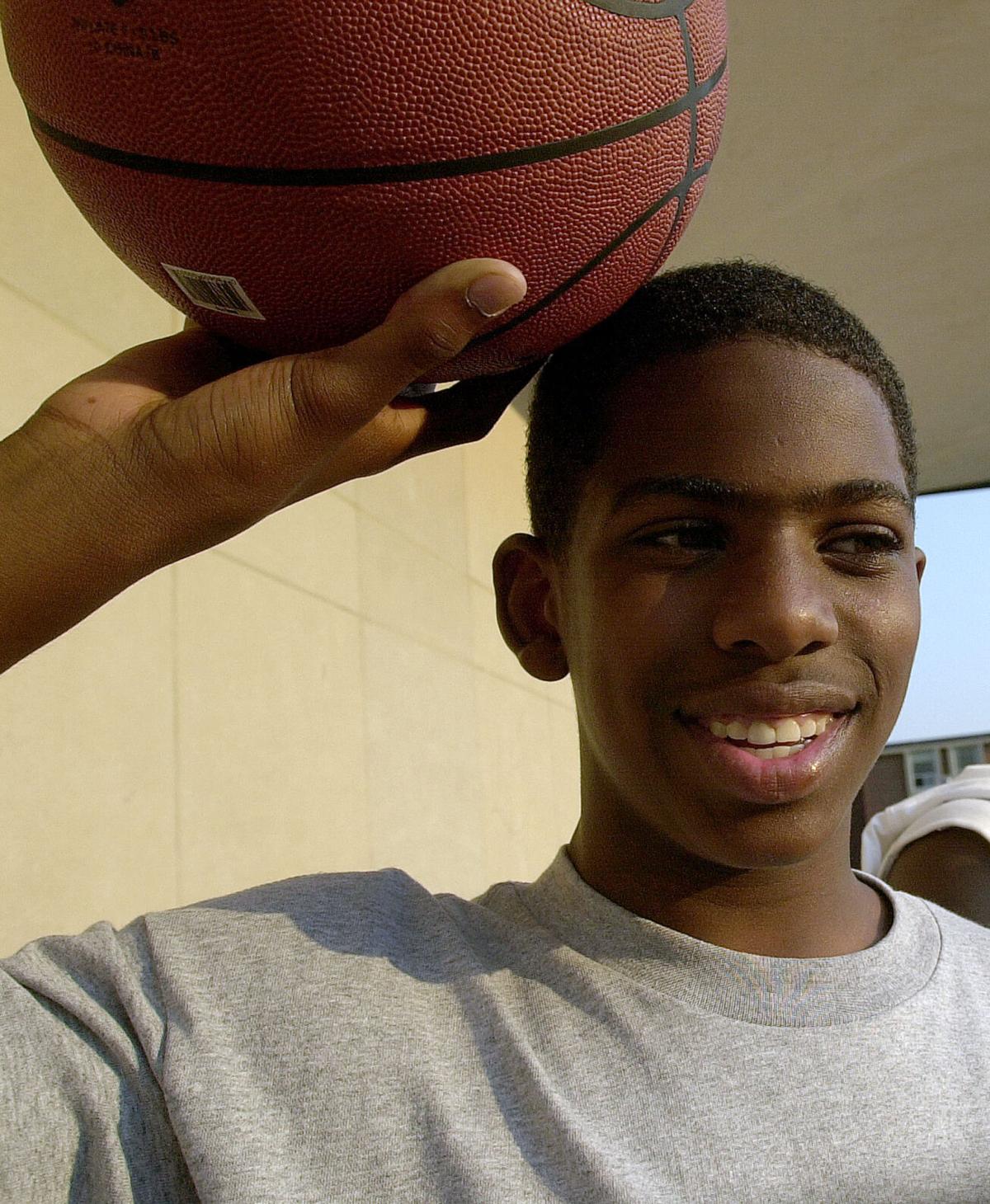 Chris Paul during his sophomore year at West Forsyth High School in May 2001.

Chris Paul and the Phoenix Suns find themselves trailing in the point guard’s quest for an elusive championship.

The Milwaukee Bucks lead the Suns in the NBA Finals, 3-2, after a victory in Game 5 on Saturday night. Should Paul, a West Forsyth and Wake Forest alumnus who grew up in Lewisville, rattle off two straight wins to clinch a title, the accomplishment would be the greatest in a career full of highlights.

The Journal staff assembled the rest of a top 10 for Paul, who has shined from his time around Winston-Salem through 16 years in the NBA. Saving a place for a rally, the nine moments that have helped define some of his basketball journey:

Paul scored a game-winner against the San Antonio Spurs in 2015, a Game 7 victory for the Clippers to move to the second round of the NBA Playoffs.

The point guard turned past Danny Green at the top of the key, tossing up a floater over fellow Wake Forest alum Tim Duncan just outside the paint. The shot fell in with one second remaining in the game.

The 2011 trade that sent Paul from the New Orleans Hornets to the Los Angeles Clippers brought together the “Lob City” as we all know it.

Paul paired with big men Blake Griffin and DeAndre Jordan for a high-flying show. The trio led the Clippers to 50-plus wins in the last five of Paul’s six seasons with the franchise.

6. A coast-to-coast winner at N.C. State

Paul made the inbound pass, got the ball back and went all the way down the court for a runner at the buzzer. Wake Forest won, 55-53, in a 2005 game where a low blow from Paul to Julius Hodge almost contributed to an upset of a Deacons team fighting for a No. 1 seed in the NCAA Tournament.

As a member of the squad called “The Redeem Team,” Team USA won in the Beijing Olympics in 2008. In the next summer Olympics, Paul started at point guard for another gold medal in London four years later.

4. His stands as the NBA Players Association president

Paul has served as president of the NBA Players Association since 2013, and he’s played a significant role in the league’s moments of tension throughout the years.

In 2014, he became a key voice against Donald Sterling, the former Los Angeles Clippers owner. Sterling made racist statements that later became public, which earned him a lifetime ban from the NBA and a $2.5-million fine. Paul pushed the conversation that led to Sterling’s ultimate selling of the Clippers.

And in 2020, he helped navigate a hiatus in the bubble after the Milwaukee Bucks chose not to play in a first-round playoff game to protest the shooting of Jacob Blake in Wisconsin. The league resumed two days later while also unveiling multiple social justice indicatives to help the communities around NBA teams and their home cities.

Chris Paul’s showdown with fellow point guard Raymond Felton allowed the Wake Forest star to show that he was the best in the ACC.

In the first top-five matchup between the two programs, Paul’s 26 points, eight assists, six rebounds and five steals sent the Deacons to a 95-82 victory.

“I’ve said before and I’ll say it again, he’s one of the most selfless players I’ve ever coached,” Wake Forest coach Skip Prosser said after the game. “And for that, he’s also one of the most popular among his teammates.”

2. Winning NBA Rookie of the Year in 2006, all-star arrival the next season

Paul went from 2005 lottery draft pick to 2006 NBA Rookie of the Year, then arrived as a bonafide superstar two seasons later. That year, he averaged 21.1 points and led the league in assists (11.6) and steals (2.7) to earn his first All-Star nod, leading the Hornets to a franchise record 56 wins that still stands today.

Perhaps the most enduring memory of Paul in the area, he scored 61 points for West Forsyth in their 2002 season opener.

The game came just after the murder of his grandfather, Nathaniel Jones. Paul scored a point for every year his grandfather lived, missing a free throw intentionally and subbing out of the fourth quarter early to turn his stat line into a memorial.

Chris Paul takes the game-winning shot against Tim Duncan, a fellow former Wake Forest star, and the Spurs in Game 7 of an NBA playoffs first-round series in May 2015.

Chris Paul of Wake Forest scoring two of his 26 points against North Carolina during the Demon Deacons’ 95-82 win at Joel Coliseum on Jan. 15, 2005.

Chris Paul and U.S. players—also known as ‘The Redeem Team’—after they defeated Angola in August 2008 at the Beijing Olympics.

Chris Paul helped the Los Angeles Clippers win at least 50 games in five of his final six seasons in L.A.

Chris Paul after being selected in the 2005 NBA Draft by the New Orleans Hornets.

Chris Paul during his sophomore year at West Forsyth High School in May 2001.