On Aug. 2, 1776, members of the Second Continental Congress began attaching their signatures to the Declaration of Independence.

In 1610, during his fourth voyage to the Western Hemisphere, English explorer Henry Hudson sailed into what is now known as Hudson Bay.

In 1939, President Roosevelt signed the Hatch Act, which prohibited civil service employees from taking an active part in political campaigns.

In 1985, 137 people were killed when Delta Air Lines Flight 191 crashed while attempting to land at Dallas-Fort Worth International Airport.

In 2016, President Barack Obama castigated Donald Trump as “unfit” and “woefully unprepared” to serve in the White House and called on Republicans to withdraw their support for Trump, saying “there has to come a point at which you say ‘enough.’ ”

A kayaker then paddled the bait about 300 yards offshore — much farther than the average angler could cast.

The fishing line was thick. The rod was stout. The reel was wide and hefty. Compared to ordinary fishing gear, it looked like a Mack truck next to a Fiat.

Everything about shark fishing is heavy, far and dangerous.

“Big fish, big bait,” Beard said. “It’s all about the fight. Catching the biggest predator out there.”

Beard, 30, has been fishing for sharks from the shore since his teens. He lives in Buxton and works at Frisco Rod and Gun, just minutes from the ocean. He owns an assortment of shark rods and smaller traditional rods, many of which bristled Monday from the rack at the front of his Toyota truck. He parks the four-wheel drive vehicle on the beach a few feet from the surf.

Beard said he’s seen an increase in interest by novice anglers at his job.

When people ask advice, he’s quick to tell them to stay way from the mouth.

Beard’s favorite spot to fish is near Cape Point in Buxton, where the Outer Banks juts into the Atlantic Ocean and the Gulf Stream and the Labrador Current meet.

Fish species from warmer and colder climates mix there, making it a unique spot loved by surf fisherman around the world.

Sharks love it, too, for the same reason.

“The point is the sharkiest place on the whole beach,” Beard said. “It’s like a feeding frenzy every day.”

The North Carolina coast gets a wide variety of shark species that feed close to shore including dusky, spinner, hammerhead, sandbar and blacktip.

Blacktips are the most challenging and can be kept if they are at least 54 inches long. Only one per angler, per day, is allowed.

“A blacktip is the most dangerous shark to mess with in the surf,” Beard said. “They’re so athletic and energetic. If you lose your grip, they can hit you.”

While unhooking a shark, it is important to keep them in the water so they can continue to breath before release, Beard said.

To catch a shark, Beard works his way up the food chain. He said he uses smaller bait, like a piece of a fish, to first catch Spanish mackerel or stingray. He then uses those as shark bait.

Beard catches all sizes of sharks from the shore, including some more than 10 feet long and weighing more than 200 pounds.

When a shark grabs the hook, he fastens a fighting belt around his waist that steadies the rod and gives him more leverage. A rope attached to the belt is tied to the truck or held by a buddy.

“A big shark will pull you into the ocean,” Beard said.

Beard and his friends Alex Bonner, David Brayman and Kyle MacMillan all join in the fun.

While the bait soaks, they sit under a portable canopy, sip drinks and tell stories. Later, they might cook a few brats while keeping an eye on their rods.

Beard did not catch a shark Monday, but it didn’t matter. He’s caught dozens before and will again.

His job allows him enough time off to be on the beach often.

“It’s less about money and all about fishing,” said Beard. “Might as well be happy and enjoy what you do.”

In this March 6, 2018 file photo, Billy McFarland, the promoter of the failed Fyre Festival in the Bahamas, leaves federal court after pleading guilty to wire fraud charges in New York. More than three years after the highly publicized Fyre Festival famously fizzled out in the Bahamas, merchandise and other "minor assets" are available for purchase, courtesy the U.S. Marshals Service from Texas-based Gaston & Sheehan Auctioneers.

NEW YORK — More than three years after the highly publicized Fyre Festival famously fizzled out in the Bahamas, merchandise and other “minor assets” are up for sale — courtesy of the U.S. Marshals Service.

In a release Thursday, the U.S. Marshals announced that 126 items from the festival will be auctioned off, with proceeds going toward the victims of Billy McFarland.

McFarland acknowledged defrauding investors of $26 million in the 2017 Fyre Festival and more than $100,000 in a fraudulent ticket-selling scheme after his arrest in the scam. He was sentenced to six years in prison in October 2018. Now 28, he’s serving his sentence at a low-security prison in Ohio, according to the Bureau of Prisons.

The festival, billed as an ultra-luxurious event and “the cultural experience of the decade,” was supposed to take place over two spring 2017 weekends on the Bahamian island of Exuma. Models and celebrities like Kendall Jenner, Bella Hadid and Emily Ratajkowski had promoted it on social media.

Customers who paid $1,200 to over $100,000 hoping to see Blink-182 and the hip-hop act Migos arrived to learn musical acts were canceled. Their luxury accommodations and gourmet food consisted of leaky white tents and packaged food, prompting attendees to lash out on social media with the hashtag #fyrefraud.

Among the mementos of that festival are sweatpants, shirts and tokens emblazoned with “a conspiracy to change the entertainment world.” As of Saturday, the lots ranged from $10 — the minimum bid for sets of two wristbands — to $300 for a baseball cap bearing the festival logo that had received 20 bids since the auction opened Thursday. At 36 bids, the most popular lot was an aqua blue hoodie featuring the flag of the Bahamas on the back and sleeves patterned with the logo. 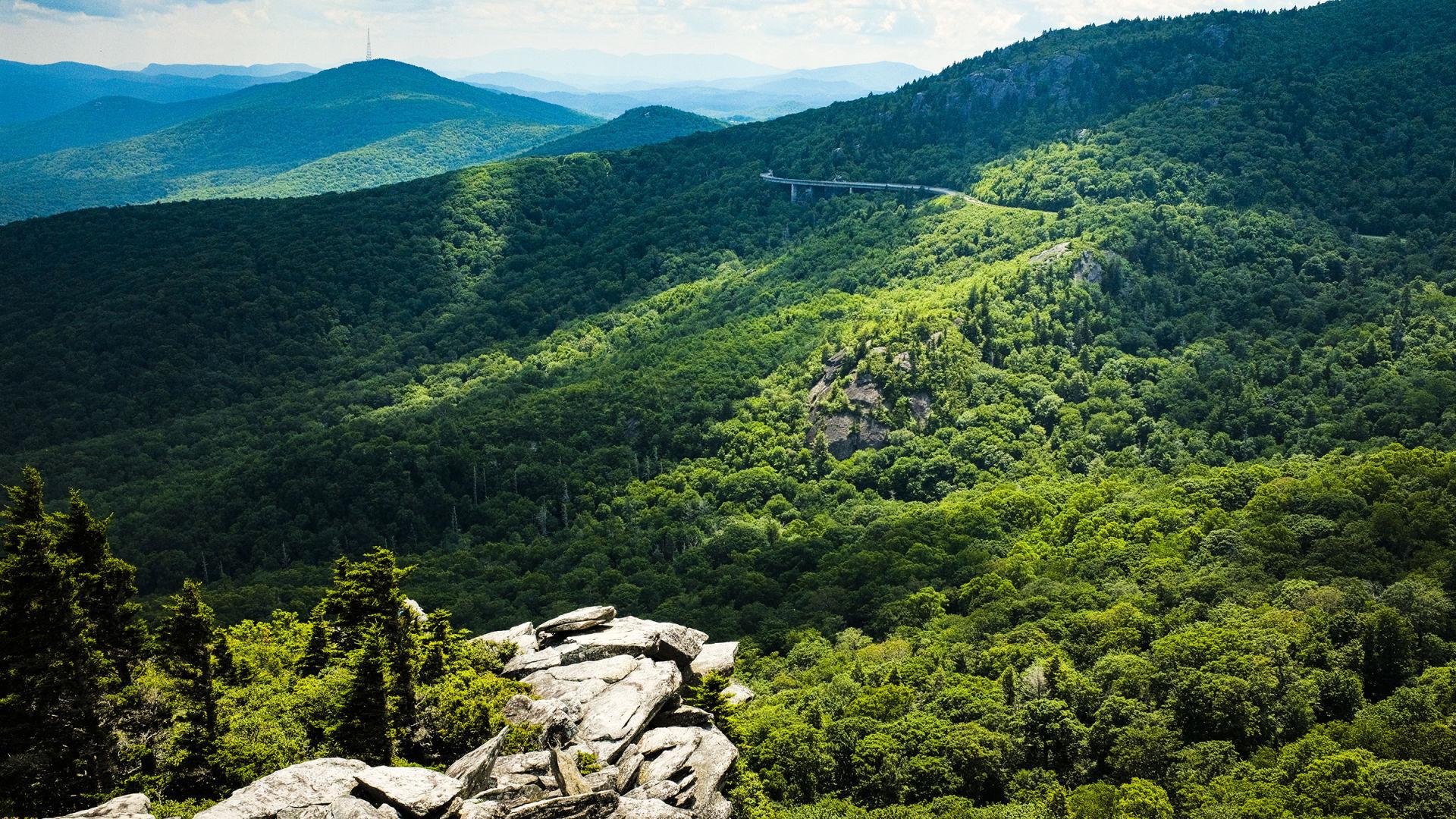 A view from Rough Ridge, including the Linn Cove Viaduct, along the Tanawha Trail on Grandfather Mountain on Thursday, July 2, 2020 along the Blue Ridge Parkway. For more of the best of the Journal’s photos from July, visit Journalnow.com/gallery.

Ask_sam
Ask SAM: What can I do about my neighbor's barking dog?
Tim Clodfelter

Q: I do not want to be “that” neighbor, but I am at my wit’s end with my neighbors’ barking dog.

I have tried to make friends with the dog by talking with it and giving it treats when I talk to the neighbors. They are apologetic and tell me they’ve done all they can to get him to stop barking but he won’t.

I cannot open my backdoor without hearing constant barking.

Do you or any of your readers have any peaceful suggestions for dealing with this problem?

Answer: It’s good that your neighbors are aware of the problem and want to help alleviate it.

One possibility is to share with your neighbors some tips from the Humane Society of the United States about ways to keep their pets from annoying the neighbors.

Here are some of their suggestions:

If your dog barks at people or animals passing by the living room window, for instance, close the curtains or put the dog in another room. If it barks at passersby

More details and tips can be found by going to www.humanesociety.org/resources/how-get-your-dog-stop-barking.

If any readers have other useful suggestions to share, they can let us know at asksam

In a situation when dealing with less cooperative neighbors, you may need to contact their local law-enforcement agency about a noise violation and ask them to help stop it.

Forsyth County Ordinance 15-1 covers loud and disturbing noises, including “the keeping of any animal which, by causing frequent or long continued noise, shall frighten or disturb the quiet comfort and repose of any reasonable person of ordinary sensibilities in the vicinity.” Provisions of that ordinance are preempted by state laws related to farming, and may not interfere with lawful farm operations.

Once law-enforcement authorities have spoken to the neighbor, if the noise continues, the person disturbed by barking can charge the owner with violating the ordinance by taking out a criminal summons at the magistrate’s office at the county jail.

Another option is to get in touch with Mediation Services of Forsyth County at 336-724-2870. It has a history of helping people settle disputes involving dogs, including barking, roaming and other problems.