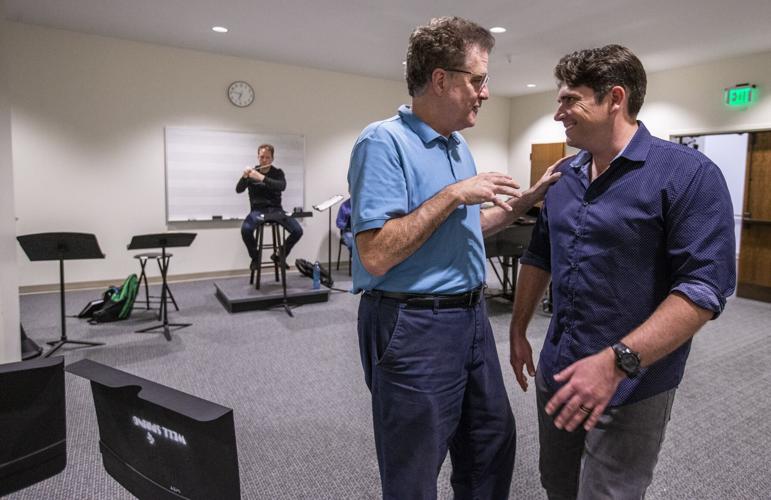 David Holley (left) talks with performer David Pershall at a rehearsal for “La Bohème” at the theater at Well-Spring Retirement Community in Greensboro. 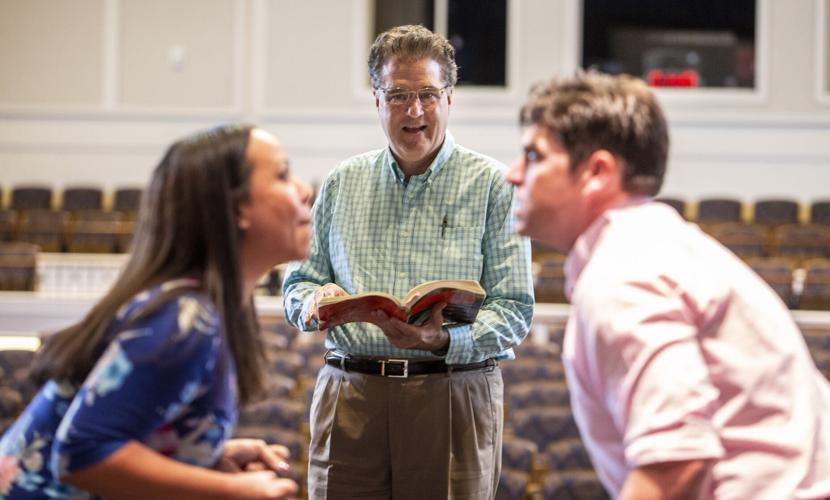 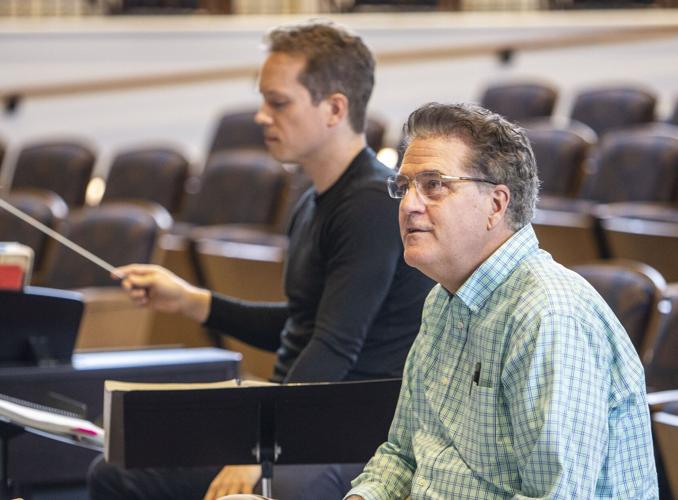 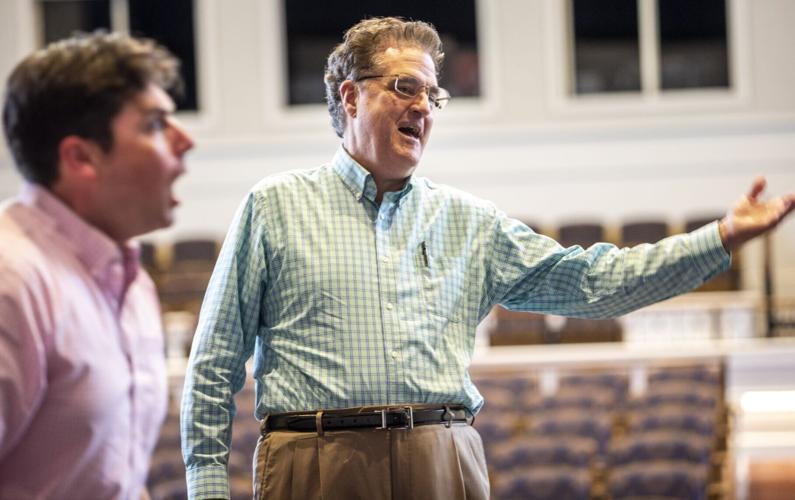 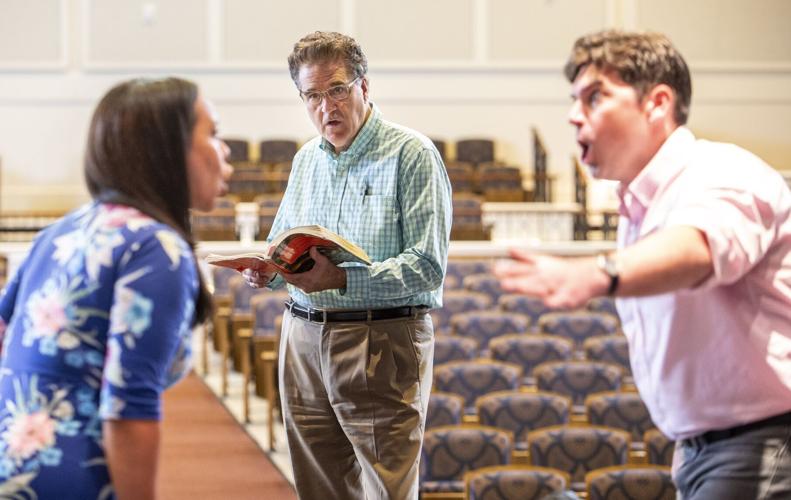 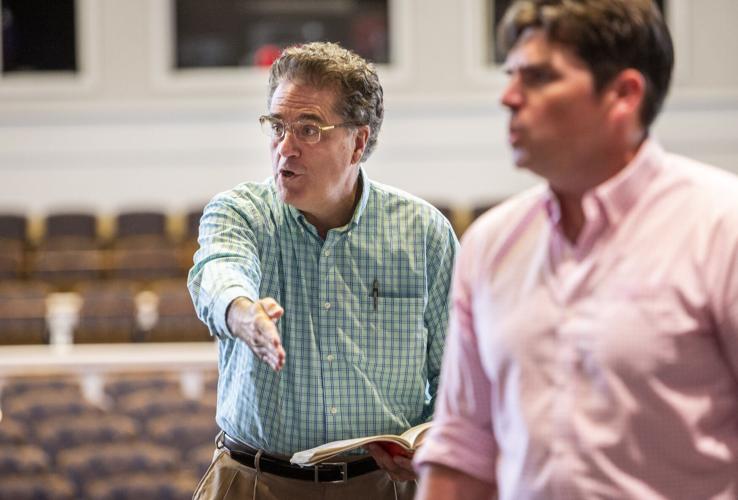 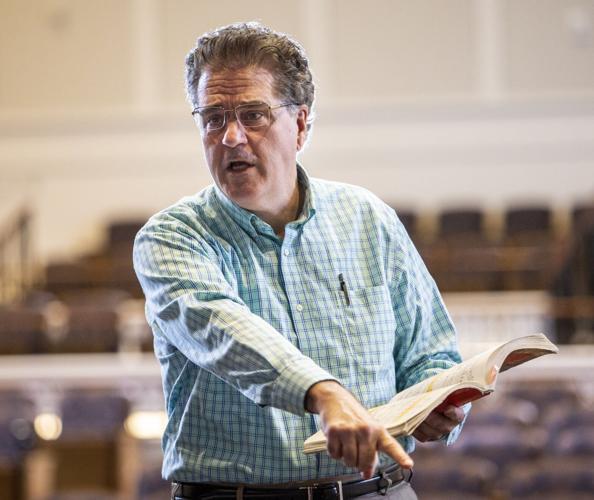 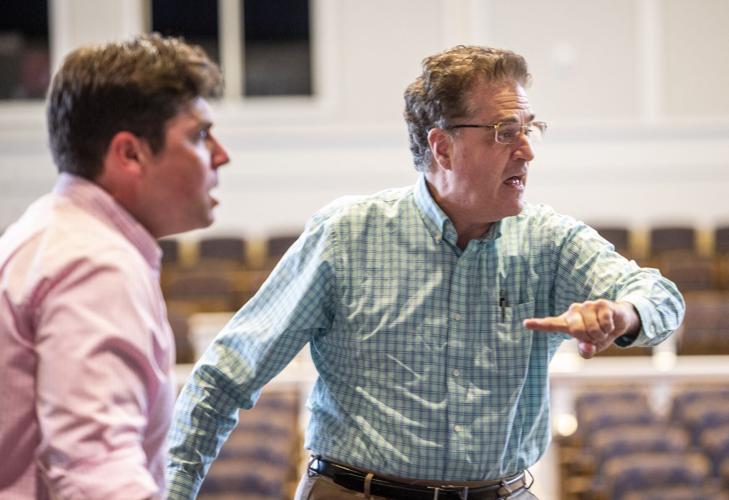 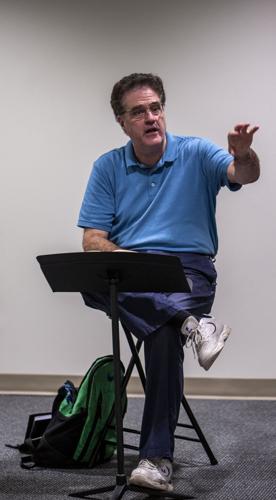 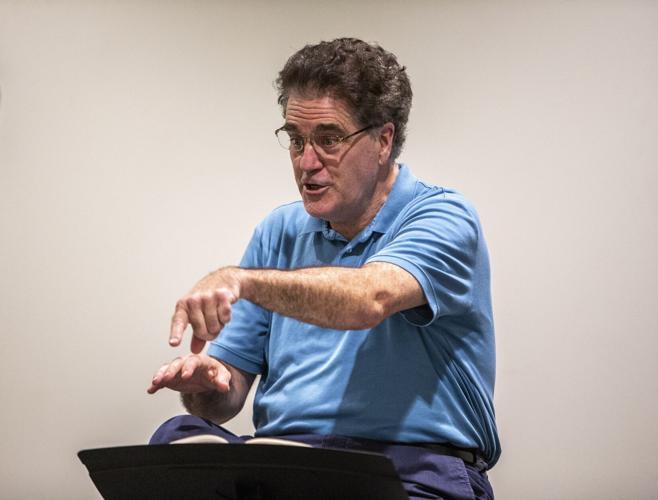 Before he sang in the big opera houses such as the Metropolitan in New York, the then-college junior and baritone stood before David Holley trying out for what would be the young man’s first opera.

“He had a great voice and great natural instincts onstage,” said Holley, remembering David Pershall. Holley, the general and artistic director for the Greensboro Opera, was a guest director casting for the comic opera “Gianni Schicchi.”

Pershall is now in the role of Marcello in the local company’s full-stage production of “La Bohème,” a mid-1800s story about relationships that is sung in Italian. “La Bohème” is the story of four struggling bohemians — a poet, a painter, a musician and a philosopher who live in Paris.

“I could tell he was destined to have a great career at that young age,” Holley said before a recent “La Bohème” rehearsal with Pershall.

Not surprising, Pershall is among known artists — the New York Times calls the now veteran Pershall “passionate and resonate” — Holley has been able to draw to Greensboro productions because of their ties.

Greensboro Opera’s live production, which also features a cast of stellar regional singers, will be Nov. 11 and 13 at UNCG Auditorium.

“He comes back just for us,” said Holley, also a UNCG music professor and UNCG opera director. “It’s all about relationships.”

That’s a meaningful word for Holley — and true, said Pershall, once named one of opera’s 25 rising stars in Opera News.

“He values the human in everything,” Pershall said.

Holley has also conducted Grammy Award-winning Rhiannon Giddens, who he taught at UNCG, in the opera’s “Little Women” and “Susannah.” Both productions also won first-place awards in their categories at National Opera Association competitions. Giddens came back for his “Porgy and Bess” production in 2020.

Holley has known the “La Bohème” lighting designer and technical director for nearly 25 years, going back to UNCG’s production of “Amahl and the Night Visitors.”

“Those relationships are very important to me,” Holley said.

A former president of the National Opera Association, Holley has also etched out a name for himself in the field as a performer and director who would make performers want to work with him. He has appeared with regional opera companies in Dallas, Atlanta and Canada, among other places in a diverse array of leading lyric tenor roles, including the title roles in “The Tales of Hoffmann” and “Roméo and Juliette.” Opera News has hailed him as, “that rare find, a tall tenor who can act.”

Behind the scenes, Holley was the stage director for UNCG’s spring 2018 production of Mozart’s “The Magic Flute,” which was a semi-finalist in three areas of The American Prize national nonprofit competitions in the performing arts. He won second place in the Charles Neilson Reilly Prize for stage direction for the School of Music’s 2019 production of “Falstaff.”

The many professional nods he’s received, he says, are also a nod to those relationships.

Back in 2006, he was casting for the role that would be Pershall’s first opera. The young man had sung in theater but never opera.

“We are human, so there was a mistake somewhere,” Pershall recalls with amusement more than a decade later.

His friend, a great singer as well, was next up.

It was Pershall who got Holley’s attention.

“David is very patient,” Pershall said. “He’s very well organized and that is very helpful for artists in general.”

He also allows artists to be creative, Pershall said.

Pershall would later sing the part of Figaro in Greensboro Opera’s production of Gioachino Rossini’s 1816 comic “The Barber of Seville,” which Holley directed. Also Georges Bizet’s 1875 opera, “Carmen,” which tells the story of the downfall of Don José, a naïve soldier who is seduced by the fiery gypsy in the tale set in southern Spain. And it continues with Pershall’s version of the character of Marcello, a near-destitute artist in Paris in the 1830s.

“He doesn’t dictate the way that I will play Marcello,” Pershall said. “He gives me the scaffolding and the framework and allows me to be the artist that I am.”

Tickets: Start at $15 at greensboroopera.org

Piedmont Craftsmen to present its annual craft fair Nov. 19 and 20 in downtown Winston-Salem

In the summer of 1997, audiences in Minneapolis at the Orpheum Theatre saw something no one had ever seen before: leaping antelopes, fluttering birds and elephants lumbering through the orchestra seats. It was "The Lion King," and it would soon transfer to Broadway and start a stunning run that regularly lands it among the weekly top earners and becomes young people's introduction to theater. It turns 25 years old on Broadway this month. Part of its longevity is due to the movie tie-in, simple-to-understand story, family-friendly themes and the fact that it's a spectacle not dependent on big-name stars.

David Holley (left) talks with performer David Pershall at a rehearsal for “La Bohème” at the theater at Well-Spring Retirement Community in Greensboro.