The 2020 ACOBE Fest featured a community choir, which also will perform at this year’s virtual event. 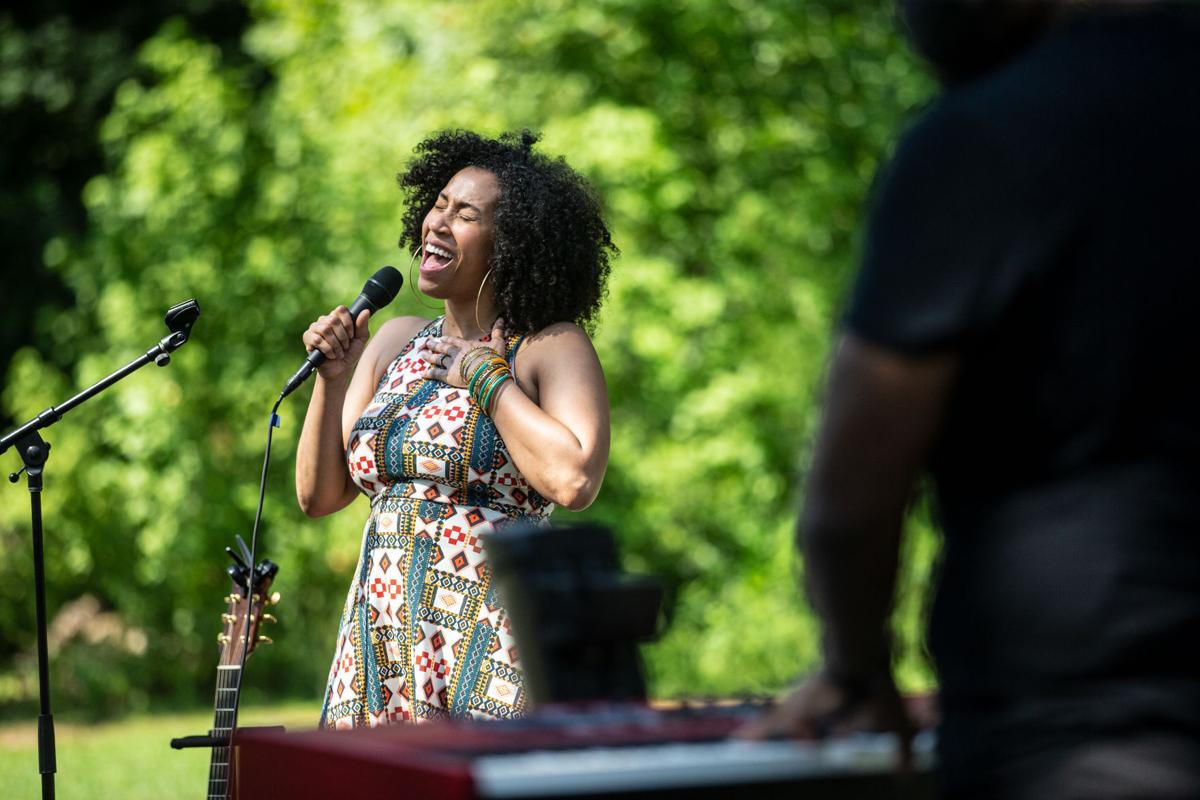 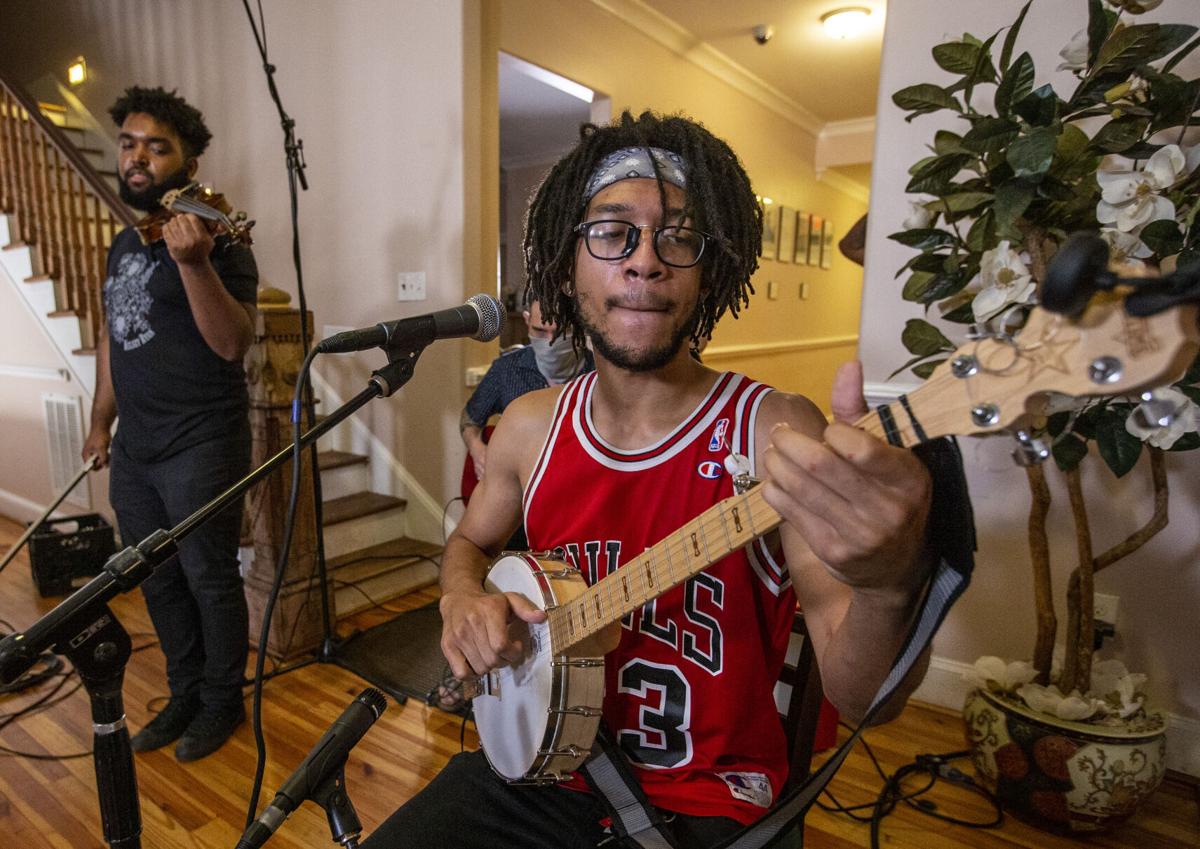 Demeanor performs Aug. 4, 2020, while filming for the virtual N.C. Folk Festival. The Greensboro-born rapper, and nephew of Grammy Award-winner Rhiannon Giddens, merges hip-hop and unorthodox folk elements. His performance was filmed at the historic Magnolia House, a segregation-era motel for African Americans traveling the East Coast.

But when the COVID-19 pandemic hit shortly after last year’s ACOBE Fest and continues to prevent crowds from gathering, founder Jordan Lee didn’t think he could make the festival happen this fourth year.

“They’re like, ‘No, it still needs to happen,’” Lee said “’Just how are you going to make it happen in a different way?’”

Lee contemplated how to do that.

“How do I reinvent this project in a way that allows it to manifest and breathe the way that it needs to?” he wondered.

So he involved more people, in particular educators like himself, as well as organizations.

This fourth year, ACOBE Fest has gone virtual and expanded.

It will be from April 16 to 18 on hopin.com, an online events platform. ACOBE Fest can be accessed directly at bit.ly/ACOBEFEST.

It will feature the ACOBE community choir, other performing and visual arts, a Black-owned business expo, networking, creative and educational sessions and panel discussions.

This year’s theme is “The Power Of Love.”

In continuing ACOBE’s tradition of celebrating love for singing with one another, the community choir has partnered with Chris Hansen’s choir at Anderson University in South Carolina for the virtual performance, Lee said.

General admission is free. But on the website, attendees can buy donation tickets ranging from $1 to $20.

Donations will support creation of a nonprofit entity to support ACOBE and other programs of education, celebration and mindset growth.

The website describes ACOBE Fest as “a collaborative virtual showcase of Black excellence and a professional development opportunity for creatives, educators and community members.”

“ACOBE Fest aims to provide a space for all people to participate in celebrating Black music, art and culture — past, present and future,” the website says. “This festival of love will provide an opportunity for our community to unite in the celebration of culture that spans multiple mediums, genres and continents.”

Lee holds an undergraduate degree from UNCG in music education, and a master’s degree in adult education from N.C. A&T.

A Grammy Award-nominated vocal music educator, he works with Penn Griffin School for the Arts in a partnership with the national nonprofit organization Notes for Notes.

At Penn Griffin, he helps to create and design a modern music production course/magnet program, to bring a new contemporary music education model to the public education system.

Running virtually over Zoom for now, the program at Penn Griffin has provided 136 youths with keyboards and microphones and partnered them with producers across the country, he said.

Lee started ACOBE Fest while he was the choral teacher at Western Guilford High School.

He gathered 45 of his students for a community choir, adding 15 more students, teachers, faculty, staff, parents and community members.

“Youth were leaders in building the festival beside me,” Lee said “I put my focus on building a community choir to be an example of unity.”

By last year, the community choir had grown to 250 people “to come together in unity and celebrate Black culture through song,” he said.

They performed at Shiloh Baptist Church in an ACOBE Fest program that also featured the Brightwood Elementary School Steppers, the Winston-Salem wedding band Soul Jam, and Vanessa Ferguson, a local finalist on the national television competition, “The Voice.”

As he prepares for this year’s ACOBE Fest, Lee expresses gratitude to local organizations that have lent support, such as Elsewhere Museum, a downtown living museum and artist residency, and Haus of Lacks, an artists’ collective advocating for social change.

Haus of Lacks, for example, will provide artists and videos for the main stage. Members of the Haus also will have their own dedicated curated space.

Those artists also will participate in a panel discussion.

The folk festival, which offers an annual weekend of music in Greensboro, became involved a few months ago when it convened a small group of local musicians, said Amy Grossmann, the folk festival president and chief executive officer. Lee was among them.

“We wanted to start dialogue about how the folk festival could foster and nurture stronger relationships with the local music scene,” Grossmann said.

“There are all these incredible artist entrepreneurs in Greensboro who are presenting their own work and doing their own events,” Grossmann said. “They said one thing the folk festival could do is amplify that local work that is going on.”

Lee talked about ACOBE Fest. He invited the folk festival to join the effort by re-streaming select performances from its 2020 virtual concert series.

“We had really incredible North Carolina Black artists as part of our series that were also filmed at locations that really exemplify Black excellence in the history of our area,” she said.

Those locations included the International Civil Rights Center and Museum and the historic Magnolia House in Greensboro and the Charlotte Hawkins Brown Museum in Sedalia.

“I am excited to learn about ACOBE Fest, see it and to be part of something that’s really special that highlights excellence from the Black community, which is important to our community,” Grossmann said. “For the folk festival to be invited to be part of that is humbling.”

What: ACOBE Fest (A Celebration of Black Excellence)

Aperture Cinema will start an annual film series called Luminaries on April 1 as it honors “legends in the making.” The series will be a combi…

While working on a recent project, Leslie Smith apologized to her neighbors, telling them she was sorry but couldn’t stop in the middle of the…

PAJAMA MARATHON: Three people from Spring Theatre will broadcast live for 24-hours nonstop in their PJs March 20-21 to raise money for the the…

“Drought” film to be presented by RiverRun International Film Festival

AUTISM AWARENESS: RiverRun International Film Festival will screen the film “Drought” online March 26 for one night only as a lead-in to Natio…

The 2020 ACOBE Fest featured a community choir, which also will perform at this year’s virtual event.

Demeanor performs Aug. 4, 2020, while filming for the virtual N.C. Folk Festival. The Greensboro-born rapper, and nephew of Grammy Award-winner Rhiannon Giddens, merges hip-hop and unorthodox folk elements. His performance was filmed at the historic Magnolia House, a segregation-era motel for African Americans traveling the East Coast.