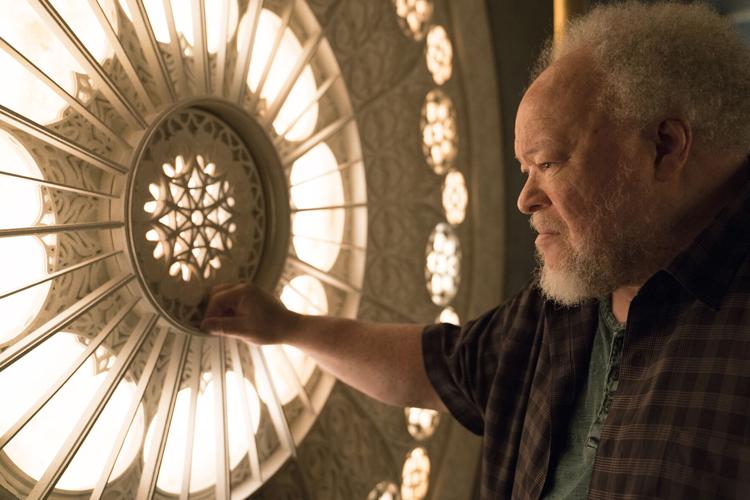 Stephen McKinley Henderson as Stewart in a scene from the science-fiction thriller TV miniseries, “Devs” in 2020. 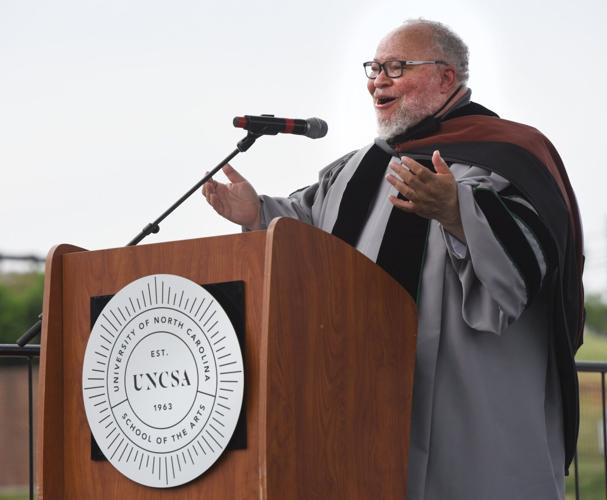 Stephen McKinley Henderson, a character actor who graduated from then-N.C. School of the Arts in 1972, addresses the graduates during UNCSA commencement on May 22, 2021, at Truist Stadium in Winston-Salem.

Stephen McKinley Henderson, a North Carolina School of the Arts alum, has been called one of “The  32 Greatest Character Actors Working Today” by Vulture.

Stephen McKinley Henderson, a North Carolina School of the Arts alum, has been called an actor’s actor.

A March 2021 Vulture article listed him as one of “The 32 Greatest Character Actors Working Today.”

Most recently, he is known for his role as Thufir Hawat in the science-fiction film “Dune,” directed by Denis Villeneuve.

“‘Dune’ tells the story of Paul Atreides, a brilliant and gifted young man born into a great destiny beyond his understanding, who must travel to the most dangerous planet in the universe to ensure the future of his family and his people,” states a Legendary Entertainment news release.

This 2021 adaptation of the classic Frank Herbert sci-fi novels ended rather abruptly with much more of the story left to tell, but fans recently got some good news.

Collided reported in a July 18 article that the second part of Dune has officially begun production and that “Warner Bros. recently delayed the movie’s release date from October 20, 2023, to November 17, 2023.”

Due to being sworn to secrecy about most things concerning the production of “Dune Part 2”, Henderson did not say much about the film.

“I can say the six Academy Awards Dune received make doing Part 2 no less challenging,” Henderson said in an email. “But it’s wonderful seeing the returning cast and crew again and truly delightful to meet the new members. I have been blessed to work with brilliant directors on all my previous projects.”

“Denis Villeneuve is a genius leading an international cast and crew. The spiritual nature and the epic scope of this reminds me of films like ‘Ben-Hur’ or ‘The Ten Commandments’ of my childhood.”

Because filming had started on “Dune Part 2,” Henderson was not able to attend the festival, but he sent in a video accepting his award.

The last time Henderson was in Winston-Salem was in May 2021 to deliver a commencement address at UNCSA.

Henderson has worked on stages throughout the United States, abroad, on Broadway, off-Broadway, in television and film. He received a 2017 Virtuoso Award from the Santa Barbara International Film Festival for his work in August Wilson’s, “Fences,” starring Denzel Washington and Viola Davis. In the 2010 Broadway revival of “Fences,” he received a Tony nomination for featured actor. That season he was presented with the Richard Seff Award for Outstanding Supporting Actor from Actor’s Equity Association.

He also has Obie and Lucille Lortel awards in the outstanding lead actor category for his work as Pops in Stephen Adley Guirgis’, “Between Riverside and Crazy.”

Henderson’s six Broadway shows include two Tony winners for best Revival of a Play – “A Raisin in the Sun” in 2014 and “Fences” in 2010. His last Broadway appearance was as Torvald in the heralded replacement cast of “A Doll’s House Part 2,” led by Julie White in 2017.

Q: Who or what got you interested in acting, singing and/or dancing?

Answer: My favorite High School teacher named Gloria Terrell was a wonderful actor/director, and she made it a joy to be part of productions. I did my first semi-professional play with her.

Q: Tell us about your first job.

Answer: My first job in Kansas City was as Lorenzo Shannon in James Baldwin’s play, “Blues for Mr. Charlie.” My first job in New York City in 1968 was for Hazel Bryant’s Afro-American Total Theatre. She was casting for a ghost. At my audition, I asked her if I could play a ‘spirit’ instead of a ghost. She smiled. I got the part.

Q: Describe yourself in four to six words.

Answer: I love poetry and fellowship.

Q: What was your most difficult role, and how did you prepare for it?

Answer: I had to sing and dance and play the bass as Slow Drag in the Broadway revival of “Ma Rainey’s Black Bottom.” I was always nervous, mostly about playing the bass and singing, after Charles S. Dutton’s monologue. I also had a musical number with the great Andre DeShields in a production of Brecht’s “Caucasian Chalk Circle.” He was incredibly generous, kind and helpful, but I was terrified every night just before that number. But once we started, it was great fun. In both cases, I prepared by doing the only thing you can do. Rehearse, relax and pray.

Q: What is your favorite memory of a time on stage or a set?

Answer: My favorite memory in the theater is a tie between when President Obama and First Lady Michelle asked to take a picture with the cast of “A Raisin In The Sun” and when my grandmother asked if she could walk on Charles McClenaghan’s set for Joe Turner’s “Come and Gone.” She said the kitchen reminded her of her mother’s kitchen.

Q: Tell us about your hidden talent(s).

Answer: I can still juggle a little bit, but I’m losing it.

Q: What is your favorite dessert, and when do you like to eat it?

Ted Lange will present a celebrity reading of his play “Blues in My Coffee” at the 2022 National Black Theatre Festival. The play is a relationship comedy/drama focused on entertaining and enlightening audiences in the relevant political issues surrounding Black Lives Matters.

Many of the works in “Chrome Dreams and Infinite Reflections: American Photorealism” exhibition on display at Reynolda are from local sources

Stephen McKinley Henderson as Stewart in a scene from the science-fiction thriller TV miniseries, “Devs” in 2020.

Stephen McKinley Henderson, a character actor who graduated from then-N.C. School of the Arts in 1972, addresses the graduates during UNCSA commencement on May 22, 2021, at Truist Stadium in Winston-Salem.

Stephen McKinley Henderson, a North Carolina School of the Arts alum, has been called one of “The  32 Greatest Character Actors Working Today” by Vulture.