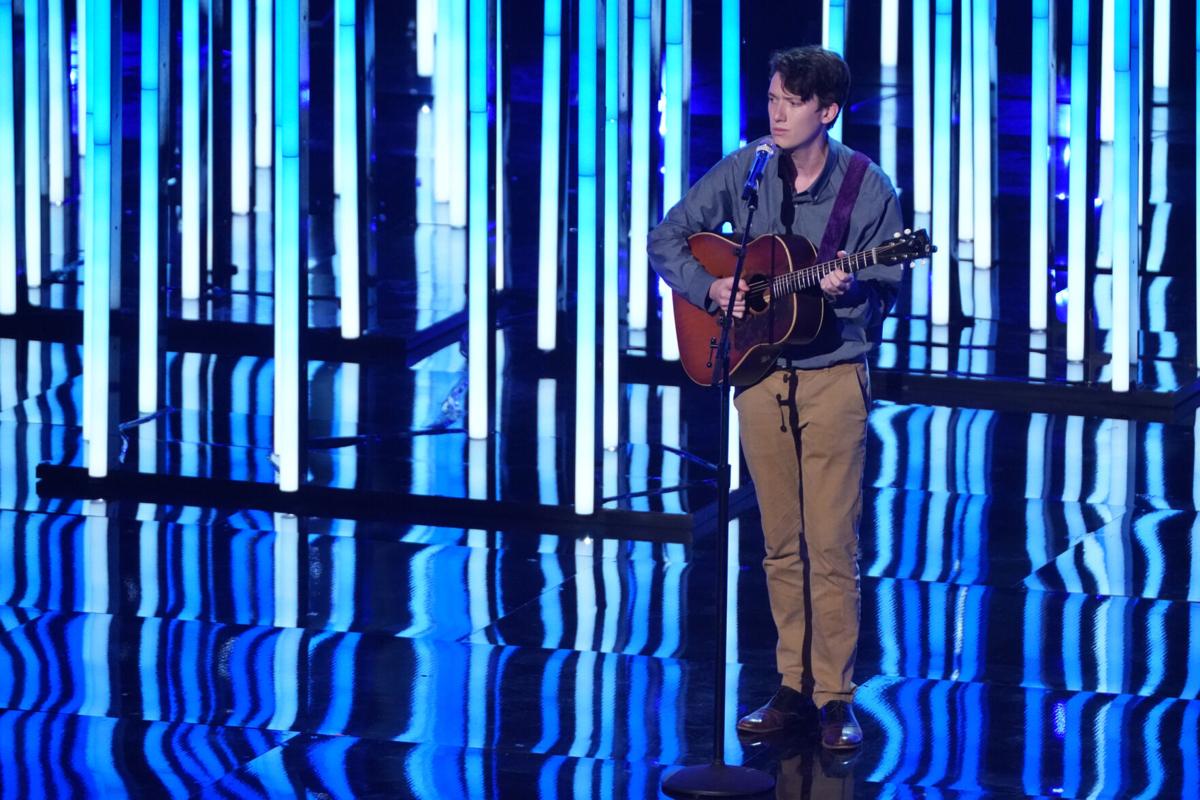 Mason Via of Winston-Salem, aka Mason Picks, is an “American Idol” 2021 contestant. Via will appear in the “Hollywood Week: Genre Challenge” episode of “American Idol” today. 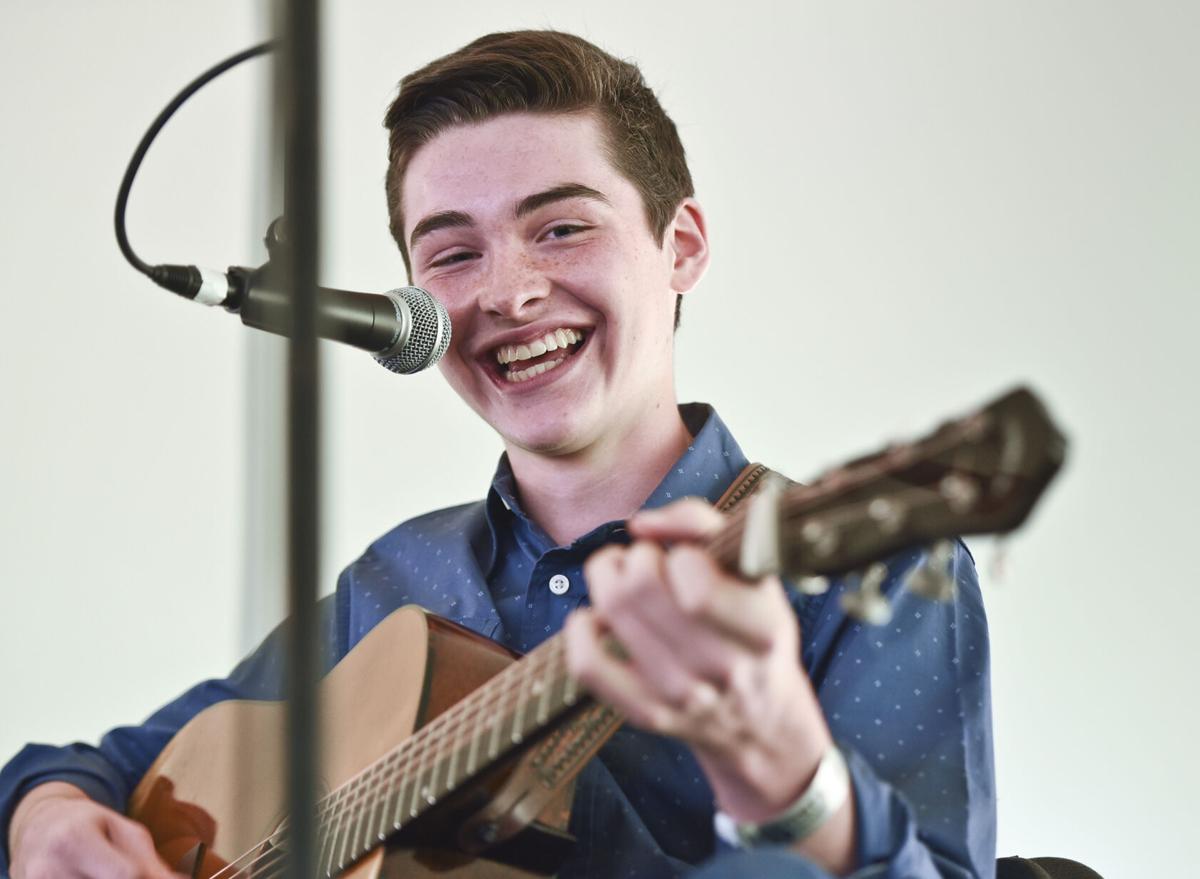 Presley Barker has advanced to the next round of "American Idol."

Mason Via and Presley Barker, both singers/songwriters from Northwest North Carolina, are a step closer on their journey to becoming the next American Idol.

Although their auditions before celebrity judges Luke Bryan, Katy Perry and Lionel Richie did not air on the latest season of “American Idol,” Via, who lives in Winston-Salem, and Barker, a native of Traphill, said they received their “golden ticket” passes to the next round of competition in Hollywood.

Via (pronounced Vi) said it was an amazing experience getting a golden ticket.

“It just kind of reinforces all that you’ve been working for as a musician and everything that anyone’s told you when you were young, telling you like, ‘You’re gonna go far,’ and all that kind of stuff. It makes you kind of believe in yourself again, when you get that golden ticket and hear it from somebody like these three celebrity judges,” Via said.

“Hollywood Week” performances will be shown over two days. At 8 tonight, Via will be featured during the first episode when contestants who made it to Hollywood give solo performances in a Genre Challenge.

Contestants who advanced from the solo round will do duets for the second round in Hollywood at 8 p.m. on Monday.

This is season four for “American Idol” on ABC.

Via, 23, and Barker, 16, are also musicians and are known locally for playing at venues in Winston-Salem. They have been favorites at Muddy Creek Café and Music Hall Sparta since the venue’s early days in Bethania. Their recently released singles are “The Flood” by Via and “Middle of Somewhere” by Barker.

Via, who grew up in Danbury, goes by the name Mason Picks on “American Idol.” He has been playing guitar since he was 10 and also plays mandolin and bass. He hosts a “BrewGrass Jam” at the Brewer’s Kettle in Kenersville. His style of music is grass-icana (a combination of bluegrass and Americana).

He said he wasn’t sure he was ready when he performed before the celebrity judges in Ojai.

“When I went before the judges it was just bright lights, camera and action,” Via said.

He said it was somewhat lonesome because he went by himself out to Hollywood.

“But I made so many friends, and we celebrated that night,” Via said. He got a nice meal with two other contestants who also received golden tickets.

While in Hollywood, Via said he had a hard time deciding on a genre for his solo performance.

“I basically, for the past few years, have been playing bluegrass, and before that, I was in a funk band ... So a little bit of everything,” he said.

At one point, he said he thought about the soul, pop or folk categories.

But, in the end, he went with country.

“I feel like maybe I’m country, and whatever I do is going to end up being country even if I don’t intend it to be,” Via said laughing.

He added that going to Hollywood was a wild experience.

“We all met up there and had great accommodations at the Hollywood Hotel,” Via said.

He got the chance to meet some of his buddies from his audition in Ojai.

“It seems like there were a lot of people that went to Hollywood that were at the audition city that I went to,” Via said.

“All of the different history of being in that space, it really makes you feel special being out there,” Via said.

Barker, a 10th-grader at East Wilkes High School, has been playing guitar since he was 7 and has been singing country music for the past few years. He has been called a young guitar phenom.

“I’m very honored to have it,” Barker said of his golden ticket. “I’m lucky I got to have the opportunity and very thankful for all the folks at ‘American Idol.’ It feels amazing, and I’m super humbled and blessed to have it.”

Meeting the judges was “a total dream” for Barker, and he said he had a great time.

“When I came out holding that ticket, I felt really thankful for everybody who has helped me along my musical journey, and I hope to continue to do so,” he said.

He plans to frame his golden ticket and hang it somewhere on the wall at home.

While in Hollywood, he said he made a lot of friends.

“There are some very talented people that you’re going to be seeing,” Barker said. “I was lucky enough to make friends with them. There are some great people out there, and I’m really thankful I had the chance to go out there and share my music with the world.

For the Genre Challenge, Barker also chose the country category. He never considered another genre.

“I’ve always been country and I just sing that kind of music,” Barker said. “That’s my favorite kind to sing. That’s just me. I really can’t change the way I talk. Country is going to come out in whatever I sing.”

People ask him just about every day when he’s going to be on “American Idol.”

“I tell them, ‘Keep watching and you might see me some time,’” Barker said laughing. “I just try to keep people interested and watching for me.”

Ben Affleck and Jennifer Lopez visited Italian jewelry store, but not for rings

DaBaby apologizes to LGBTQ+ community for ‘hurtful and triggering comments’

DaBaby apologizes to LGBTQ+ community for ‘hurtful and triggering comments’

Recording artist Alyson Williams, the movie “The Wiz” and a group of classic characters from various children’s tales and other events will be featured during “Holy Ground Revival” this week in downtown Winston-Salem.

Whodunit: Local actor loves a late-stage clue that shakes up the plot in a murder mystery

The featured exhibition in the DADA Members Gallery will be “I’m a Big Fan!” a show by Holli Conger and Walker Conger at North Trade Street Arts, 604-A N. Trade St.

Tattoo Archive takes visitors back in time through its tattoo museum, bookstore and changing exhibits

Tattoo Archive offers more than custom tattooing. The business in Winston-Salem also has a tattoo museum and bookstore.

Spirits in the wood: Exhibition at SECCA highlights home-built guitars and other works by a self-taught artist from rural eastern North Carolina

Watch "Guardians of the Galaxy Vol. 2" and you will see art by Danbury's Hal Tenny

From fractal art to pottery to writing books, Hal Tenny of Danbury is a versatile artist. In 2015, his fractal art helped him get work as a visual consultant on the film “Guardians of the Galaxy Vol. 2.”

“The Voyage of Life: Art, Allegory and Community Response” exhibit at Reynolda House to open to public July 20

Mason Via of Winston-Salem, aka Mason Picks, is an “American Idol” 2021 contestant. Via will appear in the “Hollywood Week: Genre Challenge” episode of “American Idol” today.

Presley Barker has advanced to the next round of "American Idol."