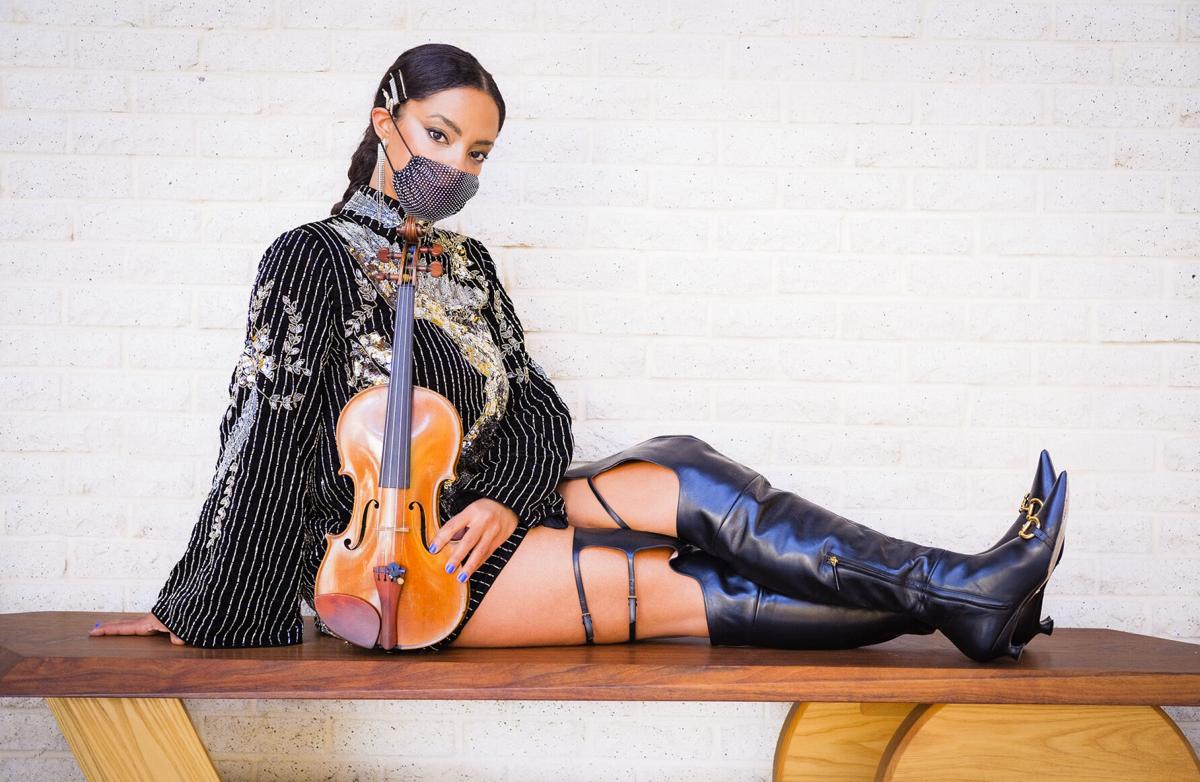 Jessica McJunkins, who performs under the stage name Lady Jess, sits for a portrait on the campus of the University of North Carolina School of the Arts. 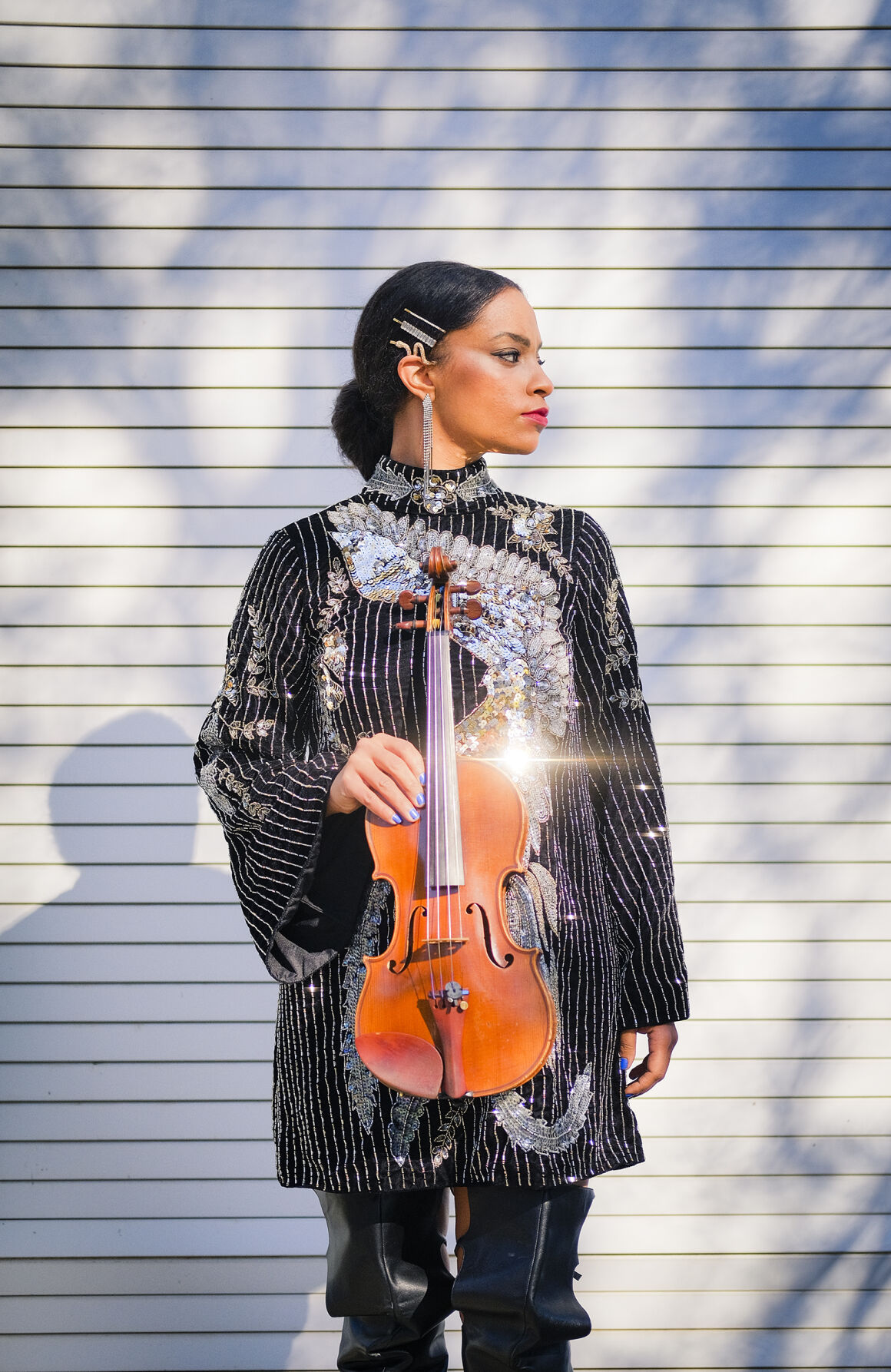 Jessica McJunkins, who performs under the stage name Lady Jess, started working as a violinist while she was still a student at UNCSA, where she graduated in 2009 with a degree in violin performance.

As a child growing up in Charlotte, UNC School of the Arts alumna Jessica McJunkins, aka Lady Jess, took to the violin like a natural.

“I saw a little black kid on ‘Mr. Rogers’ Neighborhood’ playing violin, and I told my mother that I was better than him,” Lady Jess said of his playing.

She made that bold statement without ever having learned to play the violin.

That was the moment that Lady Jess knew that playing the violin was something she wanted to do.

“I had never seen that before,” she said of seeing a black boy play the violin. “It was representation. I just took that and took ownership of it.”

Her love for the violin has taken her from Charlotte to New York and beyond, including as a soloing member of Beyoncé K. Carter’s band and performing on the Emmy-nominated documentary “Homecoming” with accompanying live album.

Lady Jess started working as a violinist while she was still a student at UNCSA, where she graduated in 2009 with a degree in violin performance.

Her first orchestral job was with the Western Piedmont Symphony in Hickory in 2006. During her school years, she also performed periodically with the Winston-Salem Symphony.

After leaving Winston-Salem, she took two years off before grad school and played with the Charlotte Symphony as well as performing for Broadway tours coming through Charlotte.

“That’s how I met conductors that liked my playing enough to say to me, ‘When you come to New York, call me,’” she said. “That’s how I established my first contacts in New York. I moved from Charlotte to New York.”

Now, in addition to being a soloing member of Beyoncé’s band, Lady Jess leads strings under the baton of Darin Atwater’s Soulful Symphony in Baltimore. She is co-artistic director and concertmistress of the Urban Playground Chamber Orchestra in New York City and a regular Los Angeles session musician.

More of her recent projects include the On The Run II Tour with Beyoncé and Jay-Z, recording and arranging strings while on tour with the Carters, for the Grammy-nominated joint album “Everything is Love” and the recently released soundtrack to Disney’s “The Lion King” with Hans Zimmer.

2016 was the first time Lady Jess played for Beyoncé.

“Her music director was looking for musicians to perform with her in Brooklyn and my name had been referred to him by other colleagues several times,” Lady Jess said. “He called me, and we had a conversation. Then he got a video of me playing online and hired me for that gig. Then I stayed with them through to now.”

Lady Jess said that playing on Beyoncé’s band was a secret goal of hers since she was 14 because she loved Beyoncé’s music and really became a fan when she found out that the singer/actress had an all-female band.

But Lady Jess didn’t see any strings in the band at that point.

“I never told anybody because I thought, ‘Strings didn’t belong in bands,’ so that just had to be like a secret fantasy of mine,” Lady Jess said.

She called it a full circle and cool moment when she joined Beyoncé’s band.

This past June, Lady Jess was one of two recipients of the third annual Alumni Artpreneur of the Year award from UNCSA to support innovative work in creative industries. Her $20,000 award for creative project will support her work as a cultural equity contractor for artists of color.

As a contractor, Lady Jess hires musicians as well as performs. The focus of her contractor work in New York is Black people, in particular Black women.

“That award has helped me immensely with my contracting work here in the city (New York),” Lady Jess said.

She said it enabled her to get software and recording equipment.

“I most recently finished recording the soundtrack for a major motion picture release,” she said. “It will be coming out in 2021.”

On Nov. 17, Lady Jess returned to her alma mater as a guest artist for a UNCSA String Ensembles concert.

Before the concert, she said, “It will be exciting and emotional. A very full-circle moment for me.”

The concert included the performance of two works by a student string ensemble; a performance with Lady Jess and her former teacher and chairman of the String Department at UNCSA, Kevin Lawrence; and Lady Jess in a violin concerto by Joseph Bologne. The latter two works also featured a string quintet of alumni from the School of Music who live in the area — Fabrice Dharamraj, violin (1996); Charles Shafer, violin (2010); Matthew Darsey, cello (2009); Eli Kaynor, cello (2016 and 2017); and Christian Gray, double bass (high school, 2010). UNCSA's new associate conductor Karen Ní Bhroin, who is also the assistant conductor of the Winston-Salem Symphony, conducted the concert.

“We’re very proud of our alum,” said Saxton Rose, interim dean of the UNCSA School of Music. “It’s a great opportunity to be able to showcase them like Lady Jess and our other alumni whenever we can.

He added, “We’re very grateful for all the work and the diligence of our students this year.”

He said UNCSA made an enormous amount of adjustments this past summer to prepare students to return on campus in August in a safe way because of COVID-19.

This year, while we can’t have large ensembles like an orchestra, we’ve replaced that with numerous smaller ensembles,” Rose said. “That’s so that we can fit these groups on our stages and in our performance halls with our distancing and safety protocols in place.”

For Lady Jess, School of Music officials used a small orchestra that accompanied her as a soloist.

“We were able to present that concert in our Watson Hall, which has a very sophisticated live streaming set up,” Rose said. “We’ve been really fortunate this year to have that live stream audio and video recording set up in Watson Hall so that we have been able to stream virtually all of our performances.”

He said the school is in a unique situation because some of its activity has to be unmasked such as when students play wind or brass instruments and blow into them, or when singers perform.

“They can sing with a special mask that we purchased, but a lot of their work has to be unmasked,” Rose said. “That’s similar to the drama students as well.”

“We were able to get really specific information down to the unique differences between the different instruments about what sort of droplets spread there is and how much aerosol build up is anticipated,” Rose said.

These safety protocols focus on the type of instrument, the type of activity, the length of playing time, the size of a room and the air clearing in a room.

For example, safety protocols for wind and instrumentalists in large and chamber ensembles include plexiglass/vinyl barriers between instrumentalists; masks worn properly, covering nose and mouth, that are not removed until instructed by the conductor/coach; proper spacing of a minimum of 6 feet between all instrumentalists; and activities limited to no more than 30 minutes per session.

“I think that’s the main reason for the success so far that we’ve had is that our students have been so conscientious in following the safety protocols,” Rose said. “I think they understand how fortunate we all are to be able to be in person, making music together. I don’t think they want to do anything that would prevent that.”

What: All UN School of the Arts performances, including guest artist Lady Jess, streamed during the fall performance season

Information: Available on demand at www.uncsa.edu/performances/on-demand/index.aspx

More: The documentary “Homecoming” is on Netflix.

Creative ideas by two Winston-Salem residents have turned into inventions that they hope will benefit themselves and society.

If Charlotte Willhite had continued to believe what her seventh-grade art teacher told her years ago, she probably wouldn’t be a visual artist today.

The Yadkin Arts Council opens registration for students to learn to play banjo, mandolin and guitar

BLUEGRASS INSTRUMENTS: The Yadkin Arts Council is bringing back its Junior Appalachian Musician Program from 4 to 6 p.m. on Tuesdays starting …

SOLO PRESENTATION: The Southeastern Center for Contemporary Art will resume its Southern Idiom series Jan. 16 with the opening of a new exhibi…

Story slam to focus on “Starting Over” theme

Forsyth County artists and creatives share what 2020 taught them

The year 2020 is sure to go down in the history books as an extraordinary year, particularly because of the worldwide pandemic.

Jessica McJunkins, who performs under the stage name Lady Jess, sits for a portrait on the campus of the University of North Carolina School of the Arts.

Jessica McJunkins, who performs under the stage name Lady Jess, started working as a violinist while she was still a student at UNCSA, where she graduated in 2009 with a degree in violin performance.