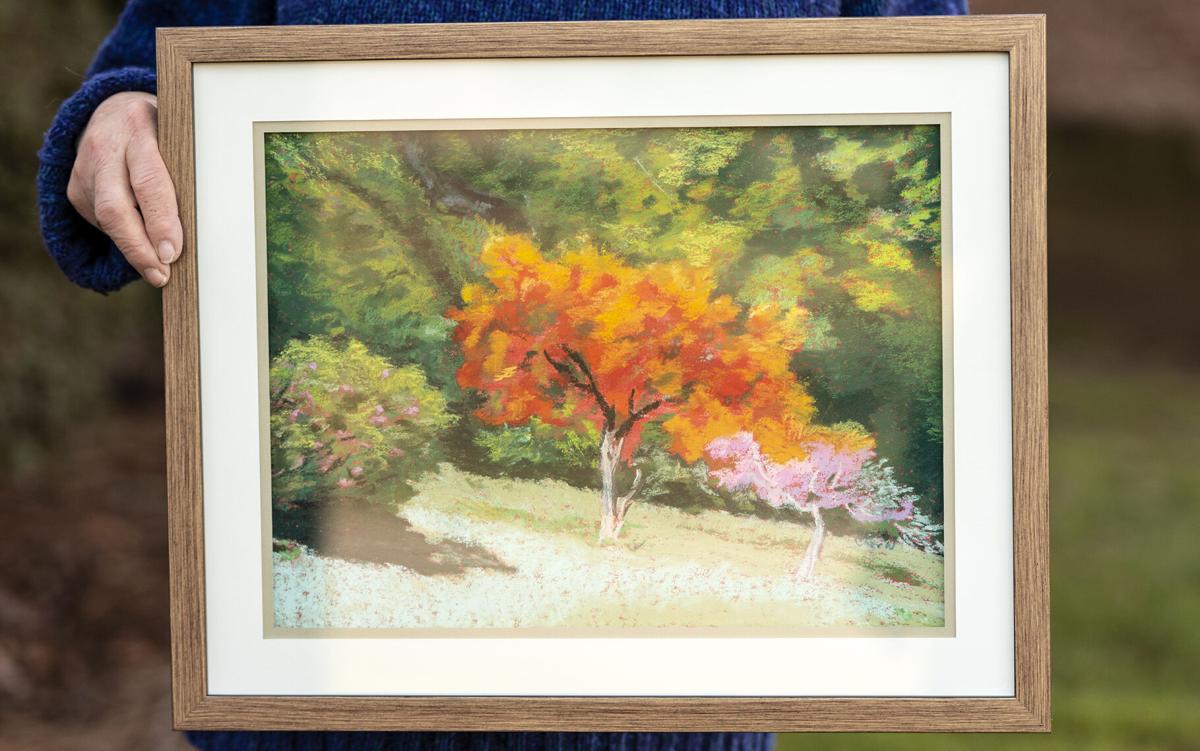 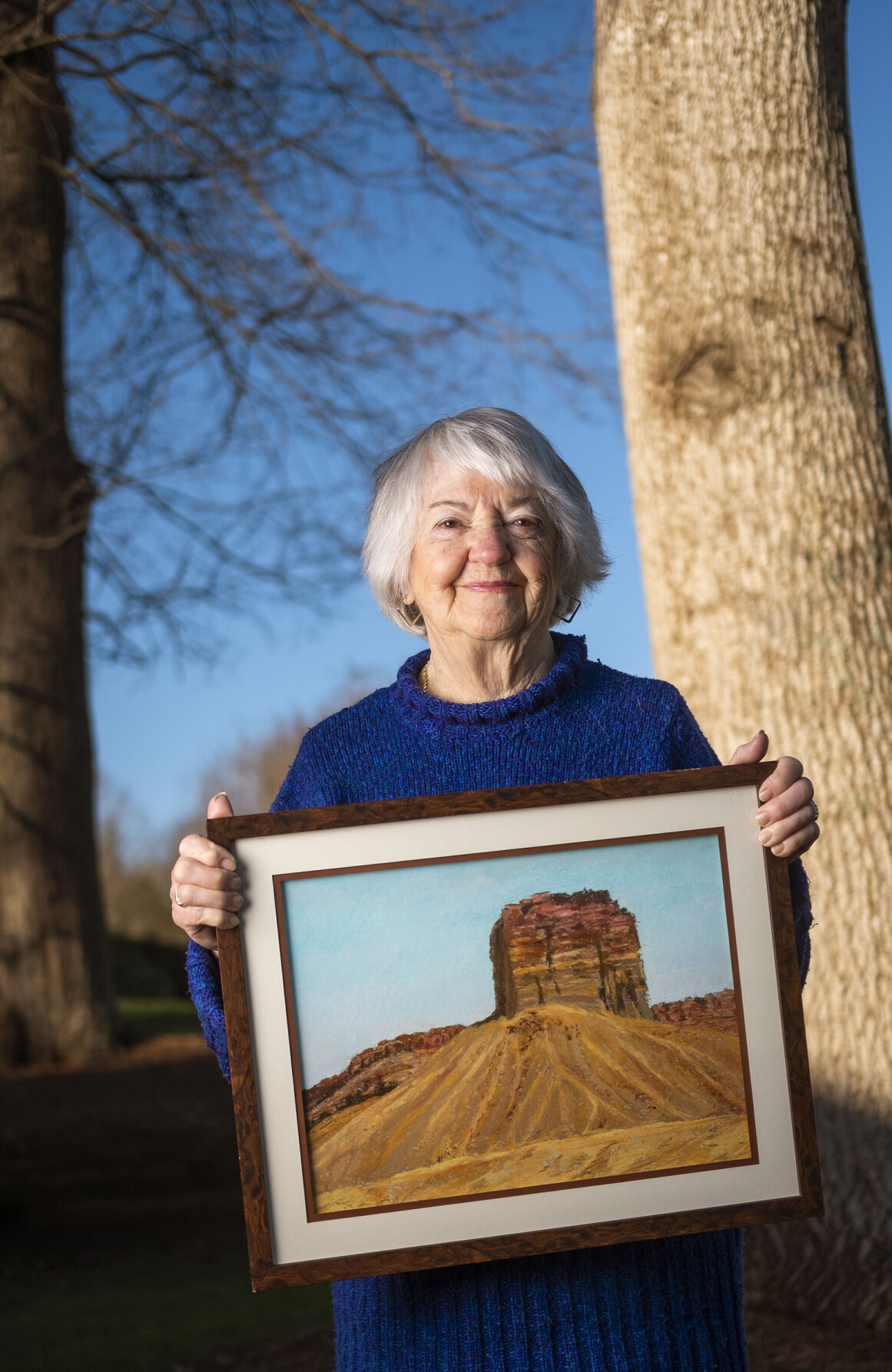 Pastel artist Charlotte Willhite stands for a portrait with her piece, "Above It All" recently in Clemmons.

If Charlotte Willhite had continued to believe what her seventh-grade art teacher told her years ago, she probably wouldn’t be a visual artist today.

“My art teacher told me I needed to be in something else. I had no talent,” Willhite said.

That teacher discouraged her from continuing any art classes.

“When you’re a young teenager, I think you tend to believe whatever an adult tells you,” Willhite said. “I believed her, so I actually didn’t take my first drawing class until the fall of 2005.”

“I discovered that I do have a little bit of talent,” she said laughing.

Now, as an artist, she focuses on the pastel and colored pencil mediums.

“The pastels are such a pure color,” she said. “I can’t get that pureness of color with anything else.”

She also does oil and watercolor paintings, as well as multimedia. She got into photography as a child and enjoys recording the different places she visits and the different scenes she sees through the lens of a camera.

She has primarily shown her works through the Muddy River Art Association.

Willhite grew up in Amarillo, Texas, in the Panhandle region. After living in various cities, she moved to North Carolina in 1970 for a job with Ladd Furniture, where she worked for 25 years in various divisions of the company. She received a bachelor’s degree in economics from High Point College in 1985. She retired in 1987 and lives in Clemmons.

Answer: The major focus of my paintings is landscapes. I have never lived or traveled anywhere that doesn't have its own unique beauty. Our world is awe-inspiring and as long as I can remember, I have wanted to share what I see and appreciate with others.

At the age of 10, I received a small camera to use and started trying to convey what I was through photography. From my efforts, I learned many fundamentals of art. But once I became aware of how much more beauty can be expressed through painting my focus changed. So now in every painting I do, I attempt to convey how amazing all elements of the beauty of places I have been. The textures and colors of trees, rocks, water, the sky above, etc. cry out to be shared. I would say that my art is realistic because of this.

Answer: I was directed away from art when I was in junior high school. The only drawing I did until I retired was cartoony characters that I would do to entertain my children when they were small. It never occurred to me to consider painting at that time.

After I retired, I was taking classes of different subjects at Forsyth Technical Community College. On a whim, I took a drawing class and discovered that I loved everything about it. After I took my first basic drawing class, I added the class on drawing with colored pencil and started doing paintings with that medium.

I have continued to take classes as I have found that I learn something new with every painting I do. Working with colored pencils has taught me and continues to teach me a great deal about color.

Because of my husband's career as an Army officer, we lived in a number of different places, including two tours of duty in Germany. Over the years and many moves, we visited numerous art museums in Europe and the United States. I discovered a deep love for art from these tours. And that is also where I discovered my love for pastels. I would be immediately drawn to paintings done in pastel. And when I started working with them, I realized I had found something that I would want to do the rest of my life.

I have recently begun to experiment with painting in oil and am enjoying that experience enormously.

Answer: That is a very difficult question to answer. I have been influenced by all of the paintings and professional landscape photography I have seen. Probably the most influence has been from the teachers of the classes and workshops I have taken since I started so late in life.

Answer: I would have to say that it is a lack of focus. I keep wanting to try something new. "What would happen if ..." seems to be a stumbling block as well as a blessing.

Answer: Don't get discouraged. Don't expect every art work to turn out the way you expected. Just love the process.

What: Artwork by Charlotte Willhite

Where: Her art is hanging at:

FASHION WEEK: The seventh annual Winston-Salem Fashion Week will close out its events Sept. 25 with 10 designers participating from 1 p.m. to …

The Stokes County Arts Council is presenting an exhibit of original art by Timothy Porter from Sept 16 to Oct. 31 in its Apple Gallery at 500 Main St. in Danbury.

A.R. Gurney’s “Sylvia,” a play about a man and wife whose marriage is affected by the arrival of a dog named Sylvia, first appeared Off-Broadw…

In-person performances are back for UNCSA's 2021-2022 season

The University of North Carolina School of the Arts just announced its 2021-2022 performance season. Offerings include film, dance, drama and music created and performed by students, faculty, alumni and guest artists.

For more than a year, the footlights have been dark, the stage curtains pulled. The COVID-19 pandemic impacted every sector of life, but none …

Pastel artist Charlotte Willhite stands for a portrait with her piece, "Above It All" recently in Clemmons.