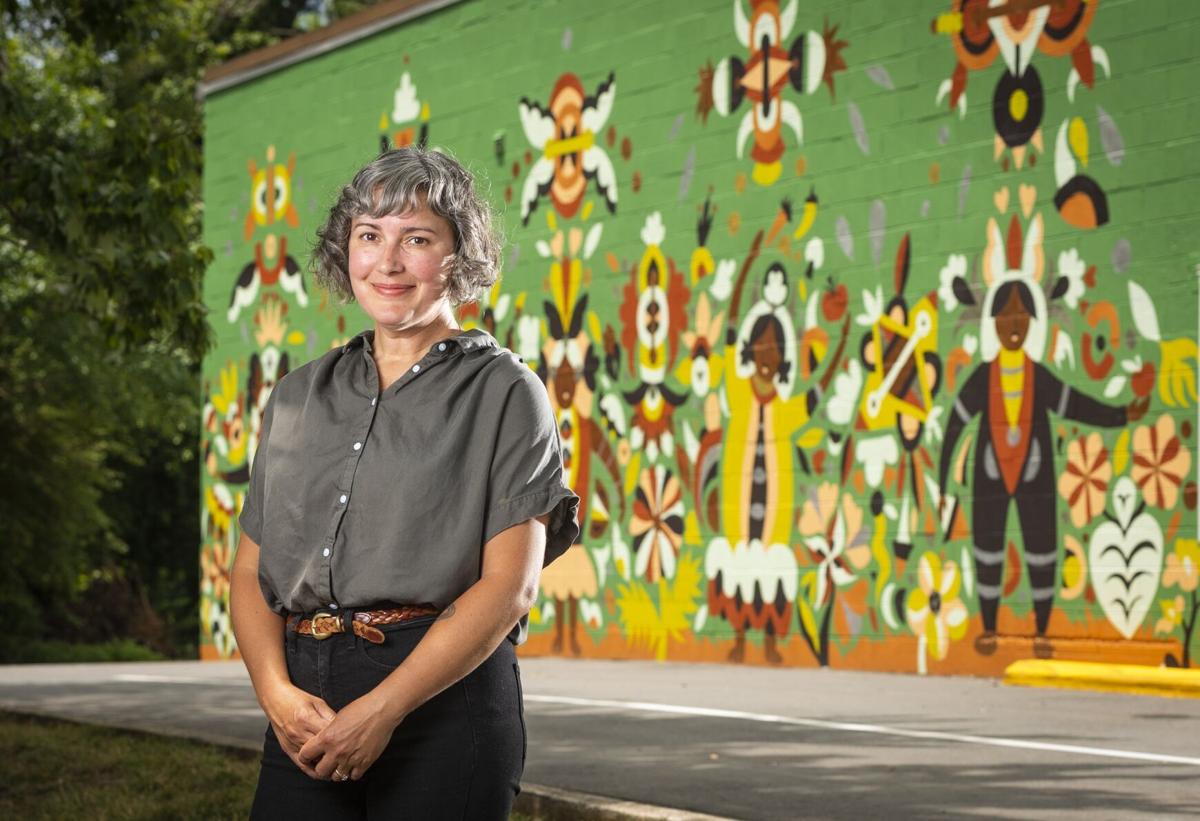 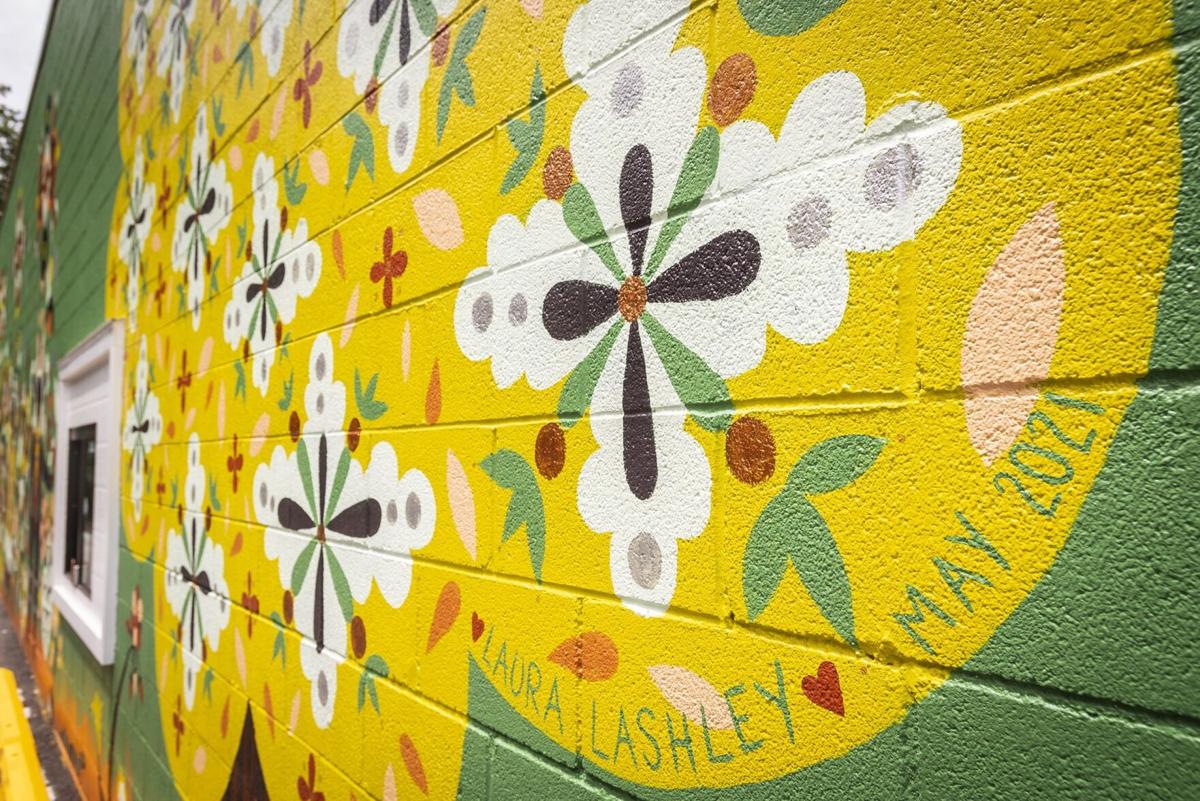 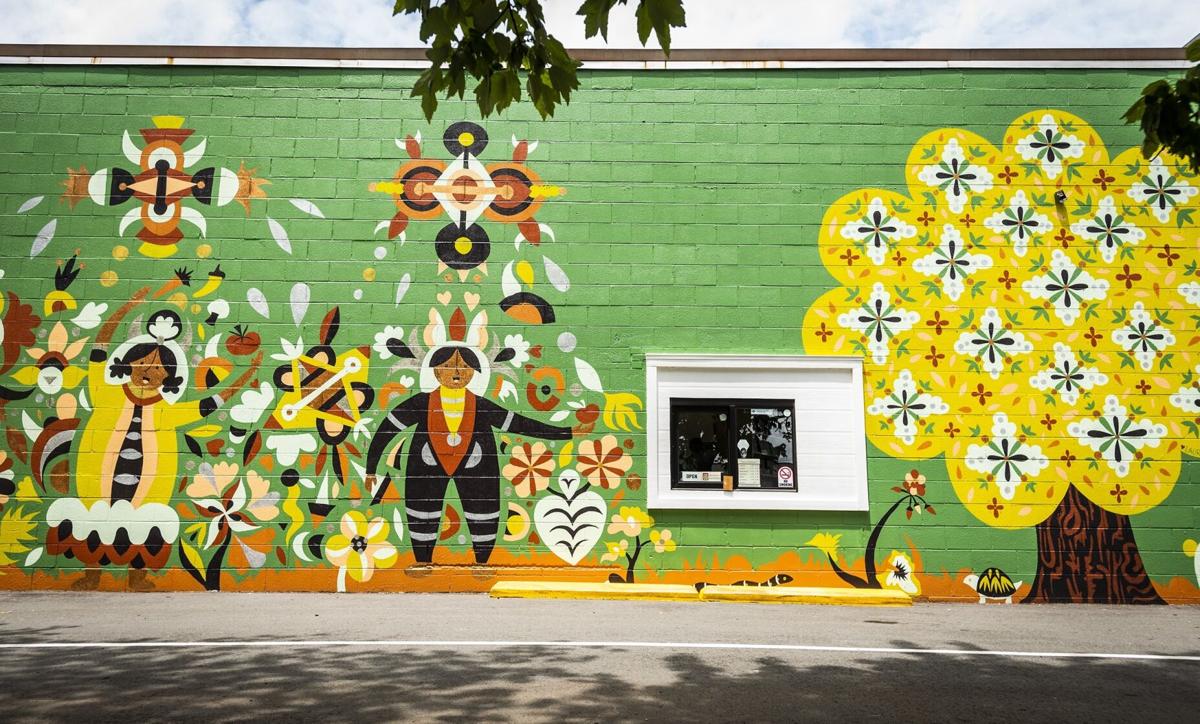 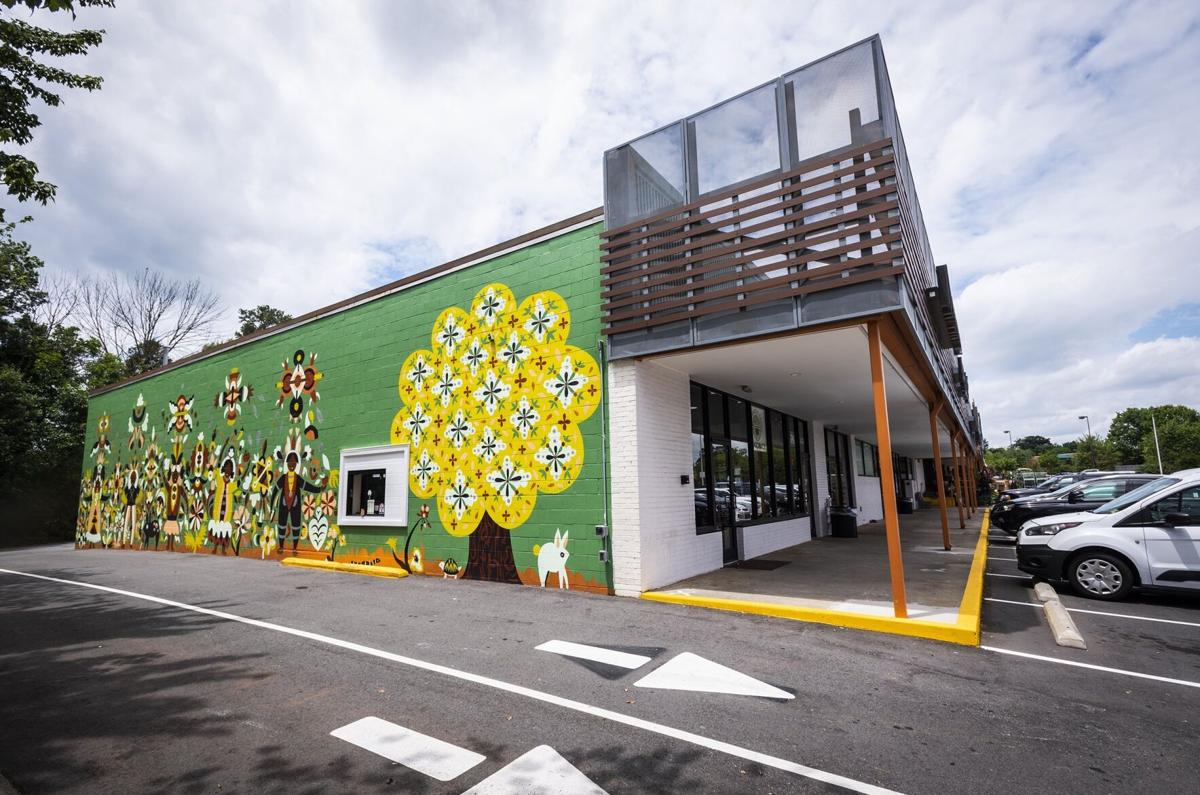 A large mural is helping to give a fresh look to Robinhood Plaza shopping center in Winston-Salem.

Artist Laura Lashley created the 70-foot by 16-foot mural on the east end of the shopping center, at the corner of Robinhood and Peace Haven roads. The mural is part of an “ongoing repositioning” of the shopping center by its owner, Mary Lois Properties LLC, and includes a newly-created event plaza in the parking lot with string lights, landscaped planters and seating.

A celebration of the completion of the mural will feature a food truck event from 11 a.m. to 2 p.m. June 12 that will include Pacific Rim Food Truck, Sliders Street Food, Food Freaks of NC and Urban Street Grill.

“Our goal has been to breathe new life into the center,” Susana Dancy, one of the center’s owners, said of the recent façade renovation and event area. “Retail centers go through cycles, and this one needed some attention, to remind people of its position as a neighborhood center with important goods and services. The land this shopping center sits on has been in my family for more than 100 years, so we care deeply about the property and the neighborhood.”

Lashley said Dancy approached her to do the mural about a year ago as the pandemic started, but it didn’t work out at the time.

“Luckily, she reached out again recently, and it was a good time for me,” Lashley said.

Using some initial sketches she did a year ago based on Dancy’s vision, Lashley developed the sketches further and came up with a stylized version of what Dancy had in mind.

“It has exceeded my expectations,” Dancy said. “I’m not one who believes in micromanaging artists, but I did convey to her the ideas that I had. She picked it up and created art.”

The mural is a tribute to women in general, but specifically to five Leinbach sisters who were a part of the Mount Tabor community: Inez Leinbach, an artist; Lois L. Dancy, a nurse; Martha Leinbach, a teacher, Treva L. Fulcher, a hair stylist; and Nell L. Duncan, a dietitian.

Dancy said the sisters — her grandmother and four great aunts — grew up on a family farm that now includes not only Robinhood Plaza, but also the YMCA, Jefferson Middle School and Leinbach Park.

“The references in the artwork are to the different careers that these women had,” she said. “They were really women ahead of their time. They were all born in the early 20th century, but all five of them had professions.”

Lashley has painted several walls in Winston-Salem, primarily downtown, but the mural wall at Robinhood Plaza is the largest she has ever painted.

“I had to rent a scissor lift to reach the top,” she said.

She started with a plain, white wall and turned it into a bright, colorful creation that radiates sunshine and joy through the images in the mural.

“I painted it dark green to start with then drew the design out with chalk,” she said. “Because the building is made of cinder blocks, it kind of had a built-in grid, so I was able to measure the left side of the wall and divide it by 5 to get where the five women went. Then I had a big tree on the far right side.”

Once she chalked in the design, Lashley was able to bring in helpers every day to basically “paint-by-number.” Friends and her husband, Spencer Pickle, helped paint.

“It took over 200 hours to do the whole thing, and we had a two-week window,” Lashley said. “That’s how long I had rented the lift, so I had to have help.”

She used a lot of green and orange colors in the mural to tie in with the colors used during the renovations of the shopping center’s façade and added some metallic accents, including copper, gold and silver.

In addition to representations of people, the mural features flowers and animals, as well as patterns she designed.

She said people who drove by to talk to her while she worked on the mural had different theories about her patterns’ origins.

Lashley lucked out with the weather during the project.

“The first five days were a miracle, then after that it did heat up, but we didn’t have any rain,” she said. “It all worked out well.”

She said she enjoyed the whole process from start to finish.

“I couldn’t believe how many people stopped and said how much they loved it,” Lashley said. “It was really encouraging, just all the positive feedback I got.”

She said some people mentioned how they typically see murals downtown.

“Everybody was like, ‘Yay! We have a mural in our neighborhood.’”

Darice Jefferson, a technician for Robinhood Family Pharmacy, watched the mural as Dancy created it from start to finish.

“It is absolutely beautiful, and it brings a lot of character to the area,” Jefferson said. “We get a lot of compliments on it from customers, and I see a lot of people taking pictures of it, which is great. People are coming out just to look at it and driving by really slow and taking pictures.”

Several businesses had a hand in the recent renovations at the shopping center. The parking lot plaza and landscaping was designed by Roots First of Winston-Salem, the large planters were built by Jericho Palm of Thomasville, and Wilson-Covington Construction of Winston-Salem was the general contractor.

In addition, other changes have been happening at Robinhood Plaza.

Robinhood Family Pharmacy moved into the shopping center in January with a drive-thru window on the same side as the mural.

Northwest ACE Hardware, which took over from longtime tenant Sherwood ACE, enlarged and renovated its space, and brought in new product lines and fresh approaches to merchandising while holding on to long-time employees, Dancy said.

Mr. Lu’s Chinese Restaurant has been there for 30 years and continues to be part of the local mix at the center.

There are two vacant spaces in Robinhood Plaza, one of which is the former Golden Apple location. Dancy would like to see a brewpub or gourmet food market go in that space.

She hopes to have ongoing events throughout the year in the plaza to help drive traffic to the center.

“We expect to have food trucks there periodically and other seasonal events,” Dancy said.

More: Laura Lashley’s public artwork includes a mandala and birds on the side of Small Batch, retaining walls at Bailey Park, lobby of the Fairfield Inn & Suites — a collaboration between Lashley and the Enrichment Center, fence in West Salem neighborhood, walls at The Ramkat, Acadia Foods mandala, walls at Eyes on Trade, flying Fox outside of Monstercade, all in Winston-Salem; and PTI Airport in Greensboro.

More: Lashley will have some of her new abstract paintings on display and for sale now through September in Camino Bakery at 310 W. Fourth St., Winston-Salem.

Why is Jay-Z suing a photographer?

Why is Jay-Z suing a photographer?

Reese Witherspoon loves sharing a close relationship with her kids

Reese Witherspoon loves sharing a close relationship with her kids