With Halloween less than two weeks away, Yesterday Village at the Winston-Salem Fairgrounds is undergoing a haunting transformation.

Robert Mulhearn, public facilities manager for Winston-Salem, said fairgrounds officials have always wanted to have a haunted attraction in the village but didn’t have the means to create one.

Then in late spring and early summer of this year, they had conversations with officials at The Original Hollywood Horror Show in Snow Camp.

“That conversation continued all the way until today to where it’s a great opportunity for both parties to create this need in the sense of Winston-Salem does not have any premiere haunted attractions,” Mulhearn said. “Now, we have one.”

The tricky part is that the Carolina Classic Fair just ended at the fairgrounds, leaving behind a whimsical Yesterday Village that was set up specifically for the fair.

“We’ve got less than 14 days to turn it into this terrifying, old-time scare village,” Mulhearn said.

The fairgrounds will provide the ticket staff and parking lot attendants, but Mulhearn said fairgrounds officials made a conscious effort to let officials with Hollywood Horror Show do their own thing to create the haunted attraction.

“They’ve filmed horror movies, and they already do one of the top horror attractions in the state, so there’s no reason for me or any of my staff to get involved, just let them do it,” he said.

The Jones brothersDean Jones and his brother, Starr Jones, who are originally from Alamance County, created The Original Hollywood Horror Show in Snow Camp in 1989.

The Jones brothers have worked on more than 100 movies and about 200 TV episodes from big feature films to Hallmark and Lifetime TV movies. A lot of them have been horror productions.

They started out doing makeup effects, creating creatures and monsters, blood and gore and more. They worked twice with Tobe Hooper, who produced and directed “The Texas Chainsaw Massacre.”

“Then it grew into writing and directing and producing,” said Dean Jones, who has some local ties.

He attended the University of North Carolina School of the Arts for design and production for a year and a summer program for acting. He graduated from UNC-Greensboro with a bachelor of fine arts degree in drama.

He worked on “Star Trek: Deep Space Nine” for seven years at Paramount and garnered two Emmys and six nominations from the show.

Today, the Jones brothers do a lot of production work and are making their own movies. They are both filmmakers and producers, and Dean Jones is a film director.

They are working on distribution for their new movie “The Black Archives” planned for 2023.

“There is room for growth, plenty of parking and the demographics are good,” he said.

The Salem’s Lot walk-through haunted attraction will have 30 to 40 cast members.

“We’re still looking for more,” Jones said. “We have a big space to fill.”

The attraction will have some characters from films such as “Sinister,” “The Conjuring,” “Silent Hill” and “Pirates of the Caribbean,” as well as zombies.

“There will be experiences when you walk into the buildings,” Jones said. “Then outside the village will be different experiences.”

He said the goal is to give people a good scare, to make them jump.

“In the movie business, we call it seat jumpers,” Jones said. “When something unexpectedly happens, it makes you jump.”

Salem’s Lot will be the third time the Jones brothers have created a haunted show outside their haunted attraction in Snow Camp.

Back in the 1990s, they did an attraction for Burbank High School in Burbank, Calif. In 2000, they built an attraction in Taipei, Taiwan, that traveled for about a year.

“We built a portable installation that traveled throughout all of Asia,” Jones said, adding that within the installation was a set that looked like the movie “Ringu.”

In Winston-Salem, Hollywood Horror Show II plans to present the haunted attraction more than once.

“Our plan is to keep bringing it back every season,” Jones said.

Where: Yesterday Village at Winston-Salem Fairgrounds 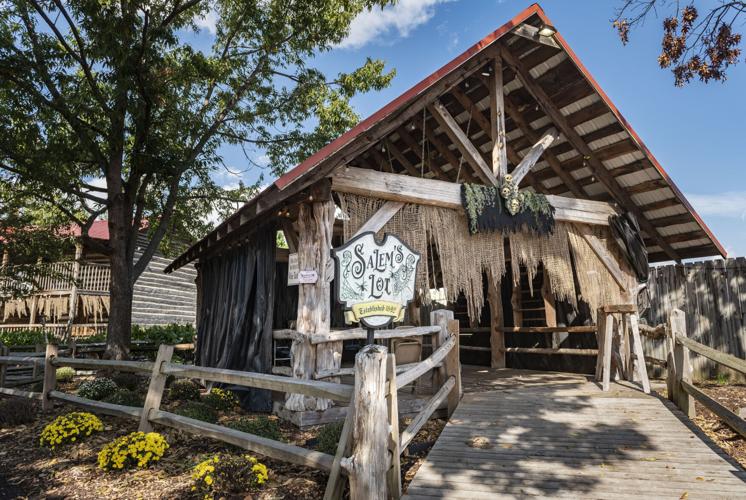 The entrance to Salem’s Lot Haunted Attraction in Yesterday Village at the Winston-Salem Fairgrounds in Winston-Salem. 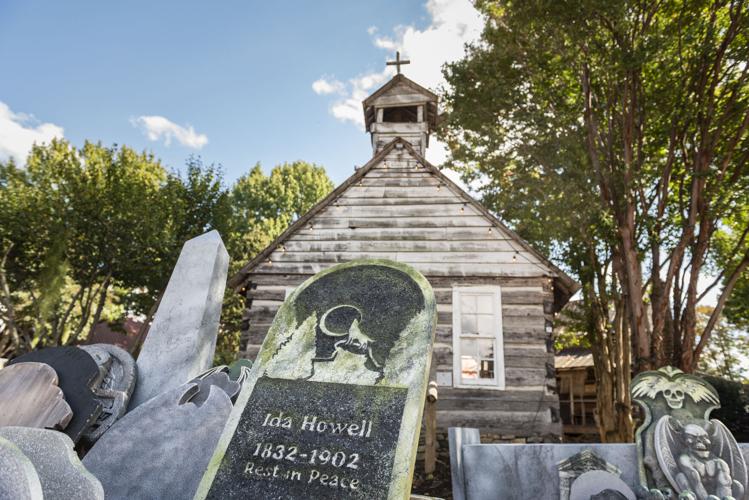 Gravestones wait to be laid out for the Salem’s Lot Haunted Attraction in Yesterday Village. 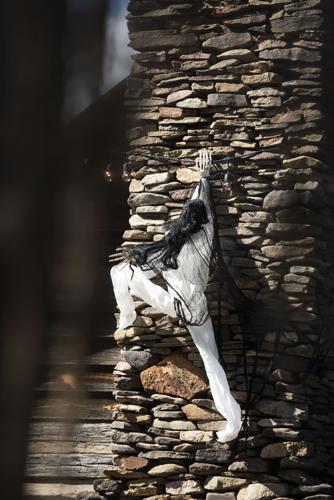 A witch climbs a chimney at Salem’s Lot Haunted Attraction in Yesterday Village. 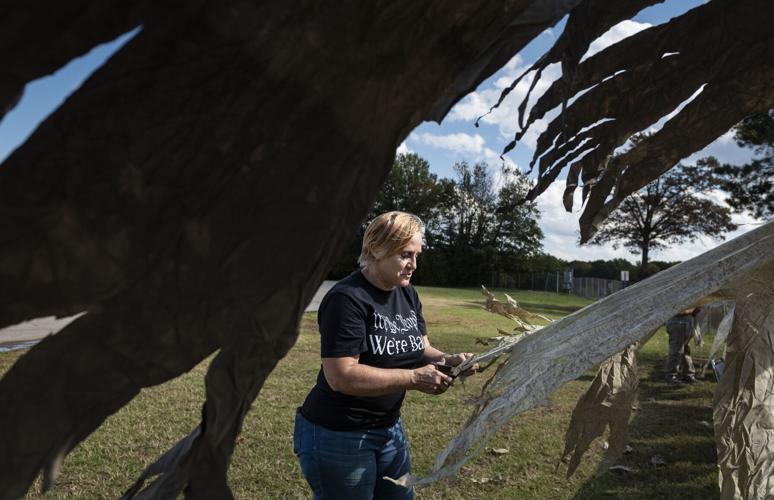 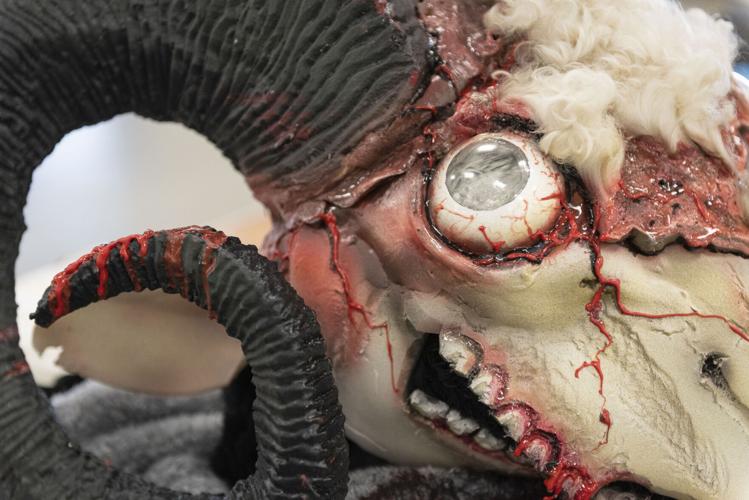 Props are waiting to be used for Salem’s Lot Haunted Attraction in Yesterday Village at the Winston-Salem Fairgrounds. 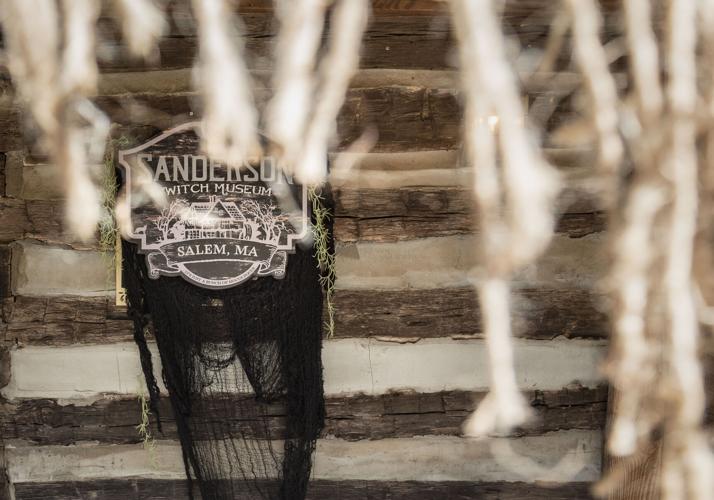 The entrance to the Sanderson Witch Museum at Salem’s Lot Haunted Attraction in Yesterday Village. 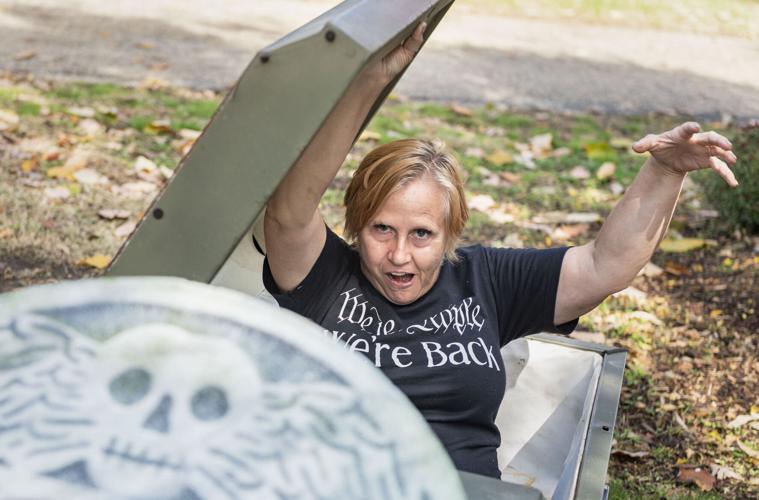 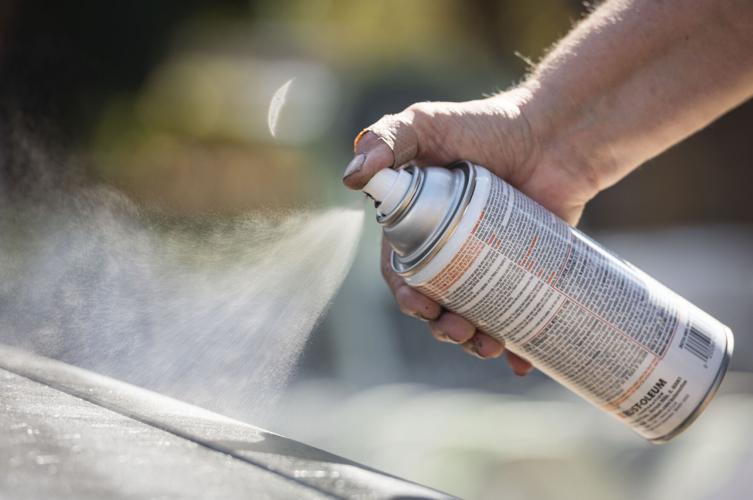