Artist and photographer Jessica Tefft has spent a lot of her career as a photojournalist covering the White House and politics, as well as major events such as the Columbine High School massacre in Colorado in 1999 and the Sept. 11, 2001, terror attacks.

“I was a few blocks from the Pentagon when it happened and ended up going straight there,” Tefft said of the plane that hit the Pentagon, just outside Washington, D.C., in Arlington, Va.

Her coverage of those events has affected her photography and art and has caused her to have post-traumatic stress disorder, she said.

After reading about soldiers with PTSD who have been transforming and dealing with their memories of war, she began to think about her art and photos that way, seeing art as a healing tool.

“That’s when I first started to rewrite some of the photos in my mind, to make endings that I preferred,” Tefft said. “I put a lot of superheroes in my pictures.”

Out of Sept. 11, Tefft’s “Super Panda,” a Superman-type hero, was born to provide comfort to people. In one of her augmented reality pieces, he is standing on the Pentagon.

“I wanted somebody to block the plane,” she said.

In recent years, Tefft, 52, has focused on her art. She is one of six winners in the ArtPop Street Gallery competition for 2020-21 who will have their artwork displayed on six billboards throughout 12 counties over the next year. Tefft won with her “Toy Horse” photogram.

“It has just been an incredible silver lining for this summer,” she said of her win.

“It’s also wonderful when a lot of the museums and galleries are closed to have an outdoor art venue where people can drive by.”

Answer: Art gives me a language to express my ideas. A lot of my thoughts are political or social commentary. One of my favorite pieces is an augmented reality piece of Ruth Bader Ginsburg lifting weights. She's a hero of mine, and I was sad when she died recently.

I value humor in art. When people laugh, they're more open to thinking about a different point of view. I've created flip box movies and incorporated circus art into my paintings.

I don't think I'm tied to one medium. Different concepts require different art forms. Since turning more fully to art from photojournalism and becoming an Artworks Gallery (in Winston-Salem) member, I've enjoyed experimenting with different art forms. Since the pandemic hit, I've worked with fabric and photograms. And I'm excited about art that incorporates technology.

Answer: When I was at Wake Forest University, I was very concerned with mastering the technical aspects of art. After school, I turned to photojournalism for a career. My creativity there was driven by capturing that decisive moment.

Now that I'm older, I appreciate the process of art and letting it take me in directions I didn't expect. I find that more and more, the concepts behind the art interest me more than the final piece itself.

Answer: I saw a show last year by Laurie Anderson at MASS MoCA art museum in Massachusetts. She is a singer and performance artist, but she has branched out into visual art. That opened my eyes to virtual reality in art and how it's pushing the boundaries of what we even consider to be art. There I was, wearing a VR headset, flying through her piece “Chalkwall.”

Nick Cave's Soundsuits also inspire me. His pieces blend sculpture and fashion. He says they evolved after the Rodney King beatings and have grown into vehicles for empowerment. It made me look at art and textiles in an entirely different way. His Soundsuits are like modern-day armor, and I was fascinated by what he chose to create these superhero costumes. Some are intricately beaded, but then juxtapose a megaphone or an abacus.

Answer: My biggest challenge is to give myself the time to work on art every day. My husband and I have two children, and they're the most important thing in our world. But it helps my state of mind to spend some time creating. Once I've found that time and open myself up to it, the inspiration is always there. Even if I don't wind up using whatever I created that day, just the process was valuable.

Answer: It does a lot of things. At its broadest, making art gives me a voice to speak about the things I care about in the world. It's also a stress reliever and a way to indulge in some "me time."

Some of my art has helped me process some of the difficult emotions from my time in photojournalism. I read about soldiers treated for PTSD who were assigned to write stories about their trauma, but then re-write the ending to what they wanted it to be. I decided to take some of my old photos of crime scenes and the Pentagon on 9/11 and envision what I wanted to happen. I called the show "Magical Thinking" because I created a better ending.

Answer: The best advice I can give is to make sure that you always keep a space to create things that matter to you. If you are trying to make a living with art or in any creative field, it is often easy to lose your voice. Carve out some space and carve out some time. Just find a way.

What: Art and photography by Jessica Tefft

More: Her “Toy Horse” photogram is on an ArtPop Street Gallery billboard off U.S. 52 near 40 bypass in Winston-Salem.

The ArtPop Street Gallery competition is a collaborative partnership between ArtPop, the Arts Council of Winston-Salem and the Triad billboard industry — Lamar Advertising and Adams Outdoor Advertising.

Artist Sheridan C. Watkins of Winston-Salem calls her “wearable art” Shairpins and they range from fashion accessories to décor.

The Drive at Winston-Salem Fairgrounds will kick off its new live “The Drive-in Concert Series” on Oct. 23 with The Marcus King Band.

VIRTUAL ECHOES: Piedmont Opera will livestream performances of “Echoes from Carolina” at 8 p.m. Oct. 16 and 2 p.m. Oct. 18 from Stevens Center…

METL at UNCSA continues to expand its programs

"The Three Musketeers." That's what Trent Spivey calls the first cohort of residents in the Immersive Storytelling Residency Program in the Me…

Winston Salem Fashion Week is going virtual this year with its annual showcase on Oct. 9 and 10, featuring seven designers from across the state.

Artist puts a dozen pumpkin houses on the market

PUMPKIN TREATS: Mike Foley, a writer, painter and filmmaker, has some “unreal estate” to show in his “Pumpkin House Listings” exhibit set for …

Tefft was one of six winners in the ArtPop Street Gallery competition for 2020-2021. Her photogram is titled "Toy Horse." 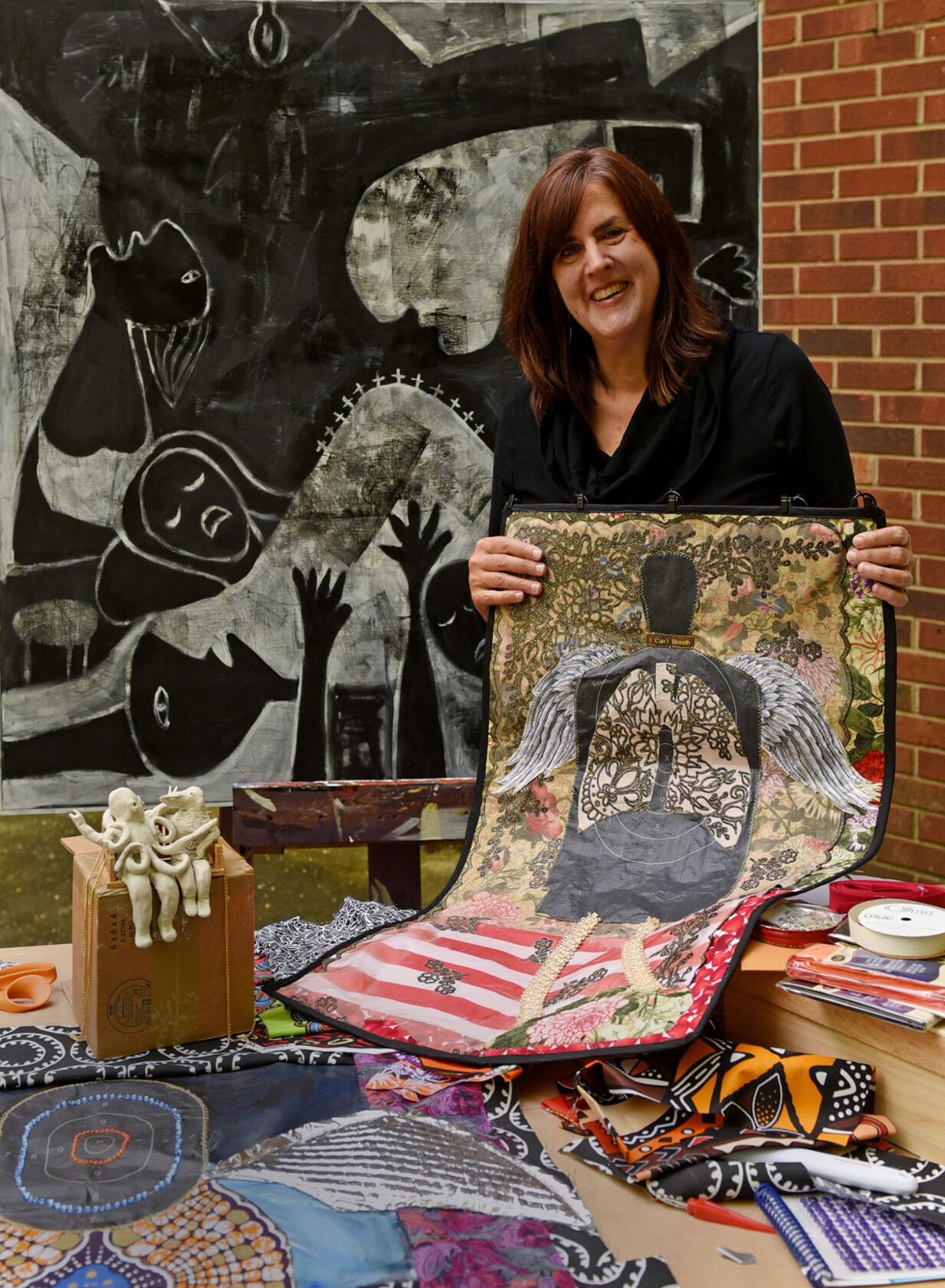 Jessica Tefft is a Winston-Salem-based artist, photographer and photojournalist.