Yulia Lysenko has lost count of the times she has been cast as Violetta in Giuseppe Verdi’s 1853 classic opera “La traviata.”

On Oct. 21, 23 and 25, Lysenko, a Ukrainian soprano, will sing the role of Violetta for the first time in Winston-Salem in the Piedmont Opera’s production of “La traviata,” as the opera company opens its 45th anniversary season.

“I just love this music,” Lysenko said. “I think ‘La traviata’ is one of the most famous operas in the world. Just beautiful music.”

She said Violetta is a strong woman who also has a sensitive side.

“You can say that this person is just strong,” Lysenko said. “No, we all have our different sides, but we don’t show all of them. I really like that Verdi with his music showed all her sides.”

“‘La traviata’ is one of Verdi’s most popular operas,” said James Allbritten, artistic director for the Piedmont Opera. “It is based on the life of Marie Duplessis, a celebrated courtesan who rose from poverty before dying at the age of 23 from tuberculosis.

“Writer Alexandre Dumas fils — one of her many lovers — based his novel ‘La Dame aux Camélias’ on their brief affair. He adapted this book into a successful play, upon which Verdi based his opera, ‘La traviata.’”

Allbritten said that modern audiences will recognize the plot of this opera from film adaptations such as the 1936 Greta Garbo classic “Camille,” the 1990 romantic comedy “Pretty Woman” that rocketed Julia Roberts to superstar status, and the 2001 musical “Moulin Rouge!” with Nicole Kidman.

This is the fourth time in 45 years that Piedmont Opera has produced “La traviata.”

Allbritten said the opportunity arose for the Piedmont Opera to welcome back Lysenko, who has previously performed in the opera’s productions.

“Lysenko was the top opera singer in the Ukraine before she immigrated to the U.S.,” he said. “This role is a perfect match for her voice, so we knew it would be the perfect way to open our 45th season. The music is also very familiar, so it is a great first opera. The end of the show will have you weeping, just like Julia Roberts did in the 1990 film.”

Other principals in the cast include Orson Van Gay II as Alfredo and Robert Overman as Giorgio Germont, Alfredo’s father. Allbritten is the conductor, and Steven LaCosse is the stage director for the opera.

Praised by Opera News Russia for her “bright and clean” soprano and “vivid and effortless” singing, Lysenko has thrilled audiences throughout Asia and Europe in principal roles, including Violetta in “La traviata,” Mimì and Musetta in “La Bohème,” Adina in “L’elisir d’amore,” Pamina in Die Zauberflote, Marfa in “The Tsar’s Bride” and Micaela in “Carmen.”

She was the first-place winner of the International Competition Mystetztvo XXI in Kyiv, Ukraine, and appeared on the television show “Zirki v Operi,” the Ukrainian adaptation of the British hit show “Popstar to Operastar.”

She has performed with the Bolshoi Theatre of Belarus, Alisher Navoi State Academic Bolshoi Theatre and Cadenza European Art Productions, as well as various festivals, including Toshkent Bahori in Uzbekistan, Festival de Lacoste in France and Slowo i Muzyka u Jezuitow in Poland.

Lysenko grew up in a small village in the southern region of Ukraine.

When she was 5 years old, she told her parents she wanted to learn to play the piano.

“That was a big surprise because I’m not from a musician family,” Lysenko said.

She also learned to play the violin and guitar in those early years.

At age 15, she started her education in music college specifically for solo singers.

Then she continued her education at Lviv National Music Academy in Ukraine. During her last year there, she was also a singer at the Lviv Theatre of Opera and Ballet.

“I almost from the beginning started to work on leading roles,” she said. “That was amazing for a young singer.”

Lysenko received her bachelor’s and master’s degrees from the Lviv National Music Academy and completed master’s courses of technique and interpretation in Poland.

In 2014, after watching news reports of what was happening in Ukraine during the Ukrainian Revolution — also called the Revolution of Dignity — a then pregnant Lysenko and her husband, Oleksandr Slobodian, made a decision to start the process of moving to the United States, where some family members lived.

In 2017, the couple, along with their daughter, Sofia Slobodian, immigrated to this country, and now live in Austin, Texas.

Back home in Ukraine, Lysenko had a full-time job as an opera singer and was getting leading roles.

“It was more comfortable to have family, to have kids, so I didn’t plan to change anything,” she said.

But life was much different here. Several months after arriving in this country, Lysenko found herself bored with nothing to do until her husband suggested that she pursue a career in opera in the United States.

She made her American debut at the Princeton Festival in 2018, in the title role of Madama Butterfly.

This is her third time performing in Piedmont Opera productions. Her first time was singing the role of Mimi in “La Bohème” in 2018, followed by Elizabeth I in “Mary, Queen of Scots” in 2019.

Allbritten said he has wanted to do “La traviata” with Lysenko for a long time.

“She is a remarkable talent,” Allbritten said. “No one will want to miss her performance!”

Lysenko said it’s hard not to be concerned about her family members who are still in Ukraine, including her parents and maternal grandmother, since Russia invaded Ukraine in February.

“Every morning when I wake up, I call my parents, just to be sure that they are still alive,” she said. “The worst for me is when they have no internet connection, or they have no electricity.”

She said it’s not easy to live a normal life when she is not sure how they are doing, especially since her parents live 35 miles from Zaporizhzhia Nuclear Power Plant.

Most recently it was reported in the news that the plant temporarily lost external power.

But Lysenko is glad that her parents, for now, have food and water and are still in their house.

“During all these months, it was a big transformation,” Lysenko said.

At first, she said, when she heard about the war, it was just bombs and weapons, but it has gone on for months.

Now, she wonders about things that she normally wouldn’t think about such as whether or not her family in Ukraine has enough food — cheese, meat and vegetables — and how pets are surviving.

Lysenko said it’s hard for people in Ukraine to know who to trust nowadays and difficult to hear that people you have known since childhood have died, disappeared or no longer have a home.

As for fellow artists in Ukraine, Lysenko said it was impossible for them to work at the beginning of the war, but now her friends in the Lviv Opera House are working and are able to have some tours to Europe.

“They know people have to work,” Lysenko said. “They need money to buy food and to pay for electricity and other things.”

During breaks in rehearsals for “La traviata,” she follows news reports on Ukraine, but Lysenko said she is happy to be in Winston-Salem and to work with Allbritten and LaCosse.

“I think I needed this communication with friends,” she said.

Tickets: Start at $20.36 at piedmontopera.org

In the summer of 1997, audiences in Minneapolis at the Orpheum Theatre saw something no one had ever seen before: leaping antelopes, fluttering birds and elephants lumbering through the orchestra seats. It was "The Lion King," and it would soon transfer to Broadway and start a stunning run that regularly lands it among the weekly top earners and becomes young people's introduction to theater. It turns 25 years old on Broadway this month. Part of its longevity is due to the movie tie-in, simple-to-understand story, family-friendly themes and the fact that it's a spectacle not dependent on big-name stars.

Piedmont Craftsmen to present its annual craft fair Nov. 19 and 20 in downtown Winston-Salem 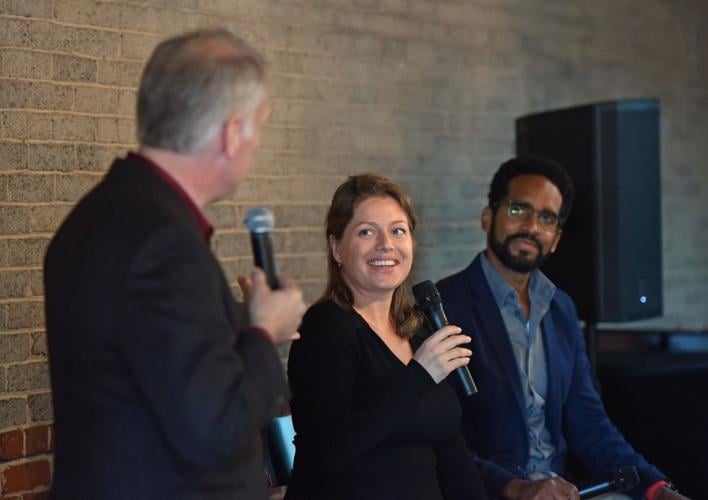 Yulia Lysenko, center, who will sing the role of Violetta in Piedmont Opera’s production of “La traviata”, received her bachelor’s and master’s degrees from the Lviv National Music Academy and completed master’s courses of technique and interpretation in Poland. 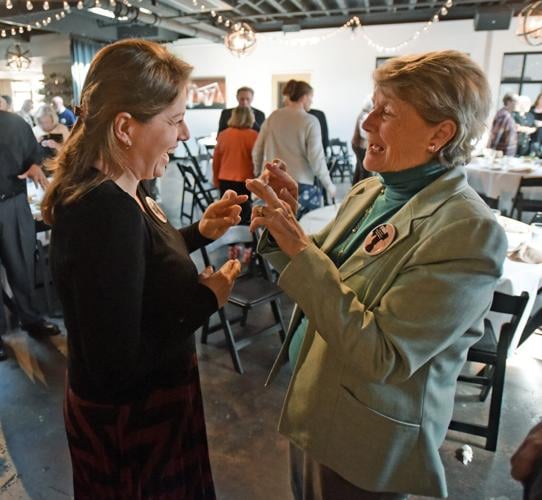 Yulia Lysenko (left), who will sing the role of Violetta in the Piedmont Opera’s production of “La traviata,” talks with Piedmont Opera board member Victoria Auchincloss after a luncheon “La Lunch: The Dish on La traviata” on Oct. 11 at Footnote Cafe & Cocktails in Winston-Salem. 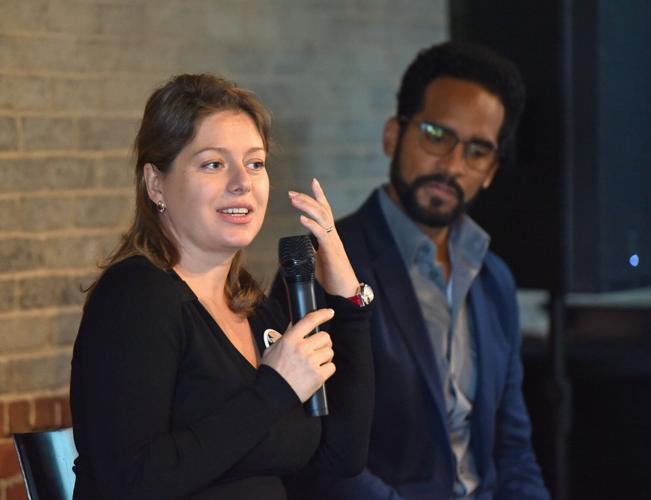 Yulia Lysenko, who will sing the role of Violetta in the Piedmont Opera’s production of “La traviata”, talks about what makes the role special during a luncheon at Footnote Café & Cocktails in Winston-Salem. 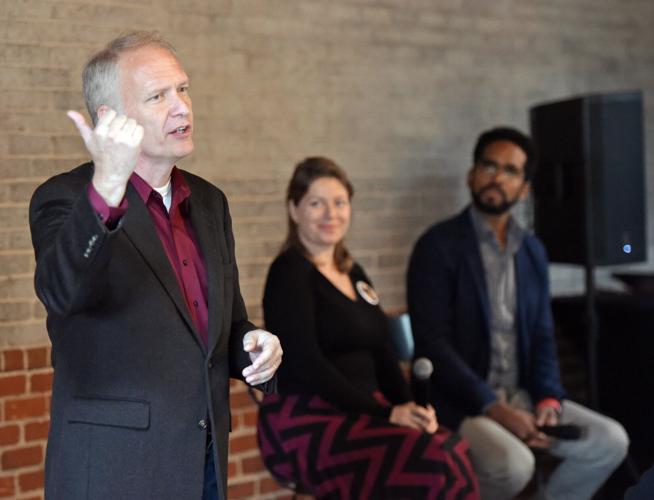 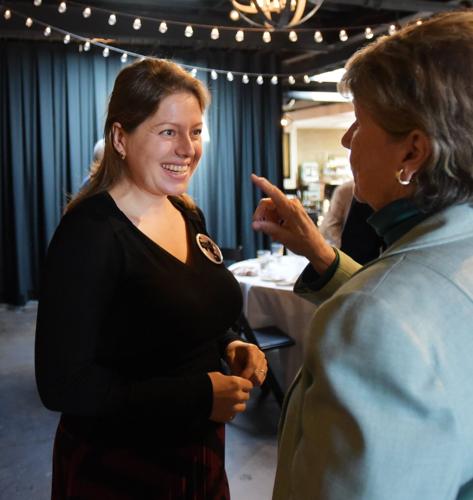 Yulia Lysenko, left, who will sing the role of Violetta in Piedmont Opera’s production of “La traviata”, said it’s hard not to be concerned about her family members who are still in Ukraine, including her parents and maternal grandmother, since Russia invaded Ukraine in February. 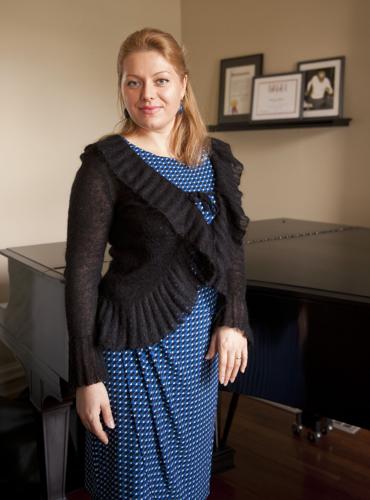 Yulia Lysenko was Mimi and Musetta in the Piedmont Opera's production of "La Boheme." 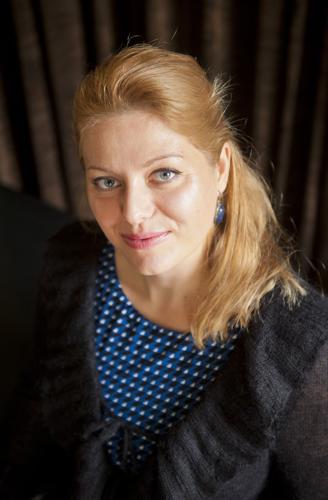 Yulia Lysenko was Mimi and Musetta in Piedmont Opera’s production of “La Boheme.”