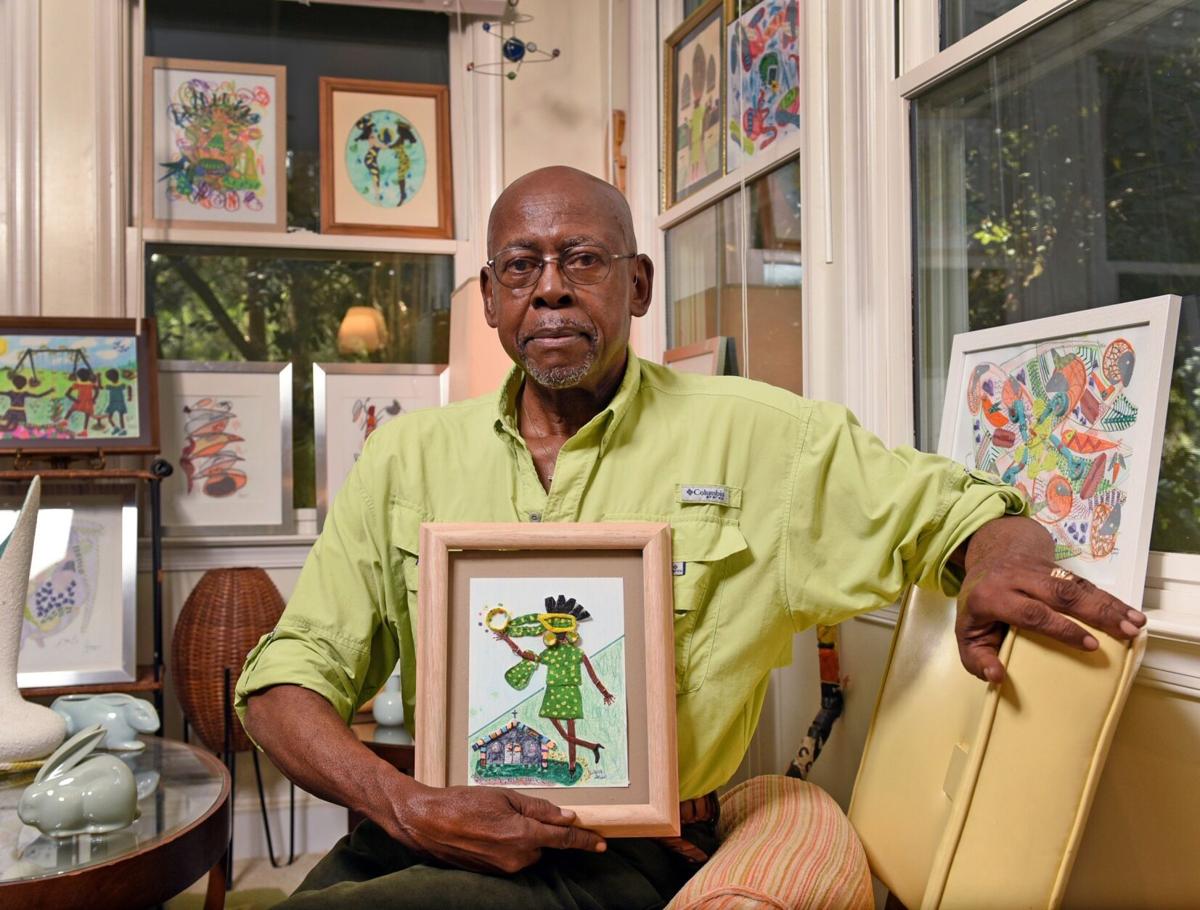 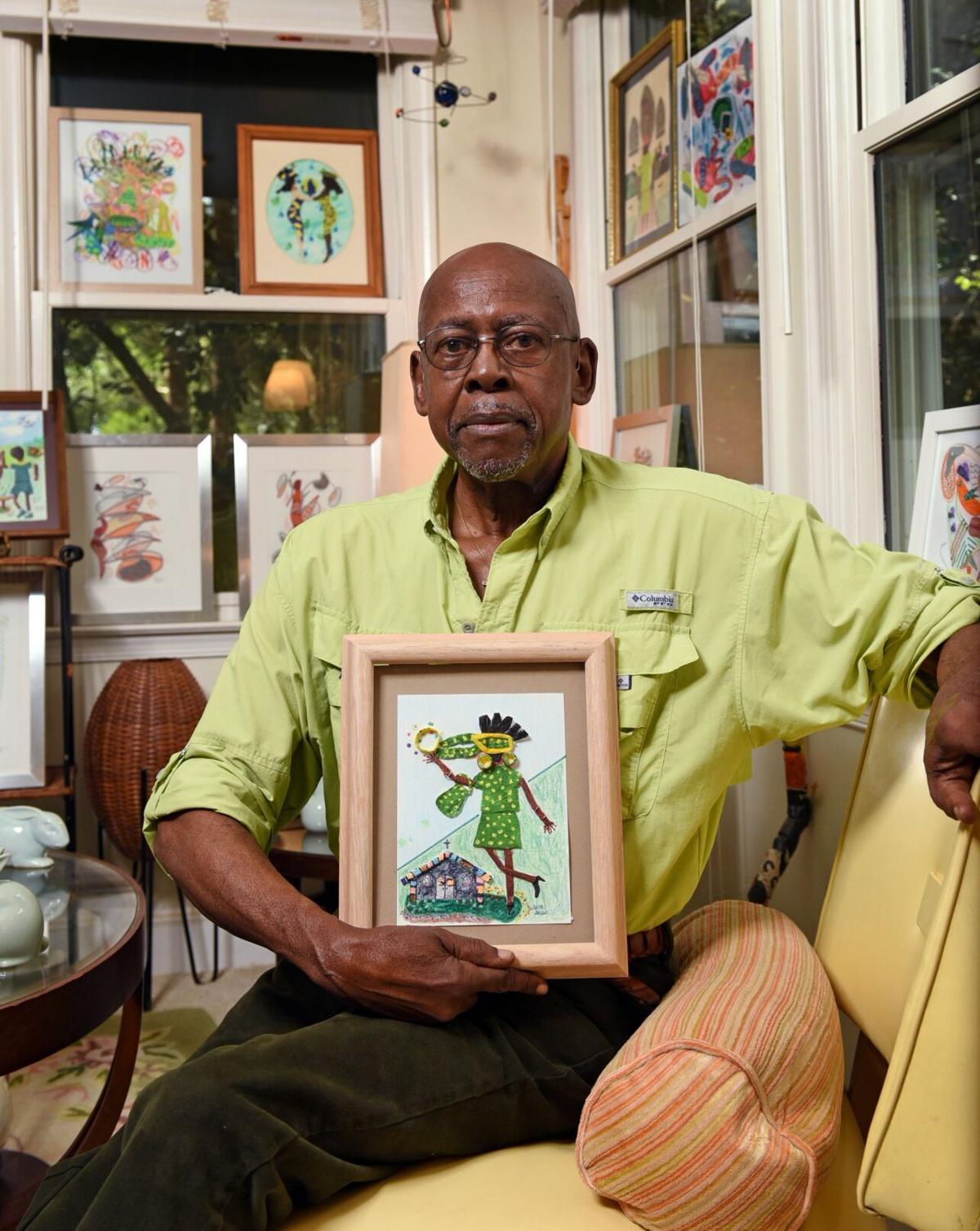 Sam Rose, a local, self-taught artist, has loved working with pencils, crayons and colors since childhood.

But he didn’t really start drawing until he retired from Wake Forest Baptist Health in 2016.

“When you retire, something wakes up inside you,” Rose said. “It’s like, ‘I’ve been busy for the last 45 years. What can I do now?’ That’s when your creativity comes into play ... You’re looking for something to do.’”

“Then all of a sudden I decided I wanted to try something else,” Rose said. “That’s when I started to work with paper.”

Rose got into doing folk art and has stuck with it. He calls his creations composition art.

“A lot of the things that I draw, I do pull from the past,” he said. “Things that really had an effect on me back in the day, it stays there. Then I try to put it on paper. Sometimes it works and sometimes it doesn’t.”

Many of his current works are made from paper towels, which he applies to the canvas in layers to get dimension.

Born in Davie County, Rose lived there most of his childhood then moved to Iredell County where he finished school and received an associate degree in business accounting.

He has had jobs in different industries over the years, starting with retail.

He was working in a shop in a hotel in Atlanta in the mid-1970s when Tom Davis, the founder of Piedmont Airlines, came in the establishment.

Rose said Davis asked if he enjoyed what he did.

“He said, ‘If you ever decide to make a change, get in touch with this person right here,’ and he gave me a card,” Rose said.

After several months, Davis interviewed in Winston-Salem for a flight attendant job and got it. That was in 1975, and he stayed in that job for four years.

He and his husband, Thom Bell, a creative arts photographer, live in Winston-Salem.

Answer: When I was young, my grandmother taught me to write in cursive. I enjoyed what I was able to do with pencils. I was starting to work with crayons. As I experimented, I realized just how much I enjoyed working with colors.

For the past 25 years, my interest in color has led me to collecting, including vintage ceramics, furniture, folk art and painting. Looking at artwork opened a door for me that had been closed for a long time.

One day in a Silver Spring, Md., gallery, I saw an original Faith Ringgold painting, and I thought, “I can try that!” And I have.

For the past 30 years, discovering artists like William Johnson, Jonathan Green and Winston-Salem artist Sam McMillan really piqued my interest in developing my own style. I have recently begun working with what I would describe as composition art, using color pencil, acrylic paint and watercolor, and a process of building up paper, cardboard, wood and glue to give dimension to my work.

Being an untrained artist, I had no knowledge of how to draw and get dimension. I began to realize that I could build up my paper objects and make them rise off the page, by cutting them, painting them, and then applying them to my canvas in layers. This process gave me the dimension I wanted to see in my art.

Being what some call an “outsider artist” allows me to do anything I want, as long as I get the effect I desire. It is very satisfying to me to realize that I enjoy the work that I have done.

Answer: I have not so much evolved as I have experienced an ongoing learning process. First, I get the desire to go to work creating. When images, colors and coordination pop into my head, I just want to get them onto paper. The funniest thing happens when I realize that I have created something totally different from what I initially planned.

If I had to acknowledge an evolution of myself, it would be knowing that I am now able to create something on paper that satisfies my need to artistically express myself, in a way that does not come easy to me verbally.

Answer: Growing up, I worked with my mother and grandmother, who were both master seamstresses. They would ask me to help match fabric colors and patterns when they were making dresses, suits, pants and shirts. This started out as work, but soon it became a fun process for me. That was the beginning of my using fabric in my drawings. I did not always have the paint or color I needed, but I definitely had the fabric, so I would cut out objects that I needed for my artwork, and that’s how I got exactly what I wanted.

Years ago, I enjoyed looking at the work of artists like William Johnson and realizing that artwork did not have to be a trained process. These outsider artists painted what they felt, what they saw, and you can tell that their artwork was for themselves, and the public just appreciated it.

I would also have to give a shout out to Sam McMillan. He used his dots to make things come alive. He was the first person that I saw using black and white characters together, and often using his favorite expression, “If we all hold hands, we can’t fight!” That message inspired me to use my art and express my own feelings on the same subject. He gave me permission to express myself with dots, which I have always wanted to do. He said it was okay.

Answer: Knowing when to stop. When Thom says “Don’t overdo it,” I often have a problem stopping. I keep wanting to add something else, and then it can get to be too much, or it takes away from what I intended to create.

Answer: When I sit down to draw, it shuts down my mind to everything around me. Last year, when the whole world halted due to the pandemic, drawing and painting really began for me. I could sit for hours practicing, trying new techniques, making mistakes, correcting them, and the next thing I knew, my work was turning out to be very therapeutic. Sometimes when someone approaches me and wants my attention, I really have to snap out of it. And to me, that is complete joy.

Answer: Don’t put too much emphasis on all of the opinions that you get, and you will get them. This artwork is for you, and if it is appreciated by others, then they also benefit. It is there, it is finished, and it is yours.

What: Artwork by Sam Rose

The 2021 Emmy Awards were a night of firsts and surprises

For more than a year, the footlights have been dark, the stage curtains pulled. The COVID-19 pandemic impacted every sector of life, but none …

In-person performances are back for UNCSA's 2021-2022 season

The University of North Carolina School of the Arts just announced its 2021-2022 performance season. Offerings include film, dance, drama and music created and performed by students, faculty, alumni and guest artists.

A.R. Gurney’s “Sylvia,” a play about a man and wife whose marriage is affected by the arrival of a dog named Sylvia, first appeared Off-Broadw…

The Forsyth County Public Library system will present the “Let the Record Show” exhibit, featuring old records and album covers, through Sept. 30 on the second floor gallery at the library at 660 W. Fifth St., in Winston-Salem.

FESTIVAL FUN: The 44th Annual Yadkin Valley Harvest Festival will be from 10 a.m.-3:30 p.m. Sept. 11 on Elm and Jackson streets in downtown Ya…