Local, mixed-media artist gets inspiration from children to create her artwork
0 comments
Share this
{{featured_button_text}}
1 of 5 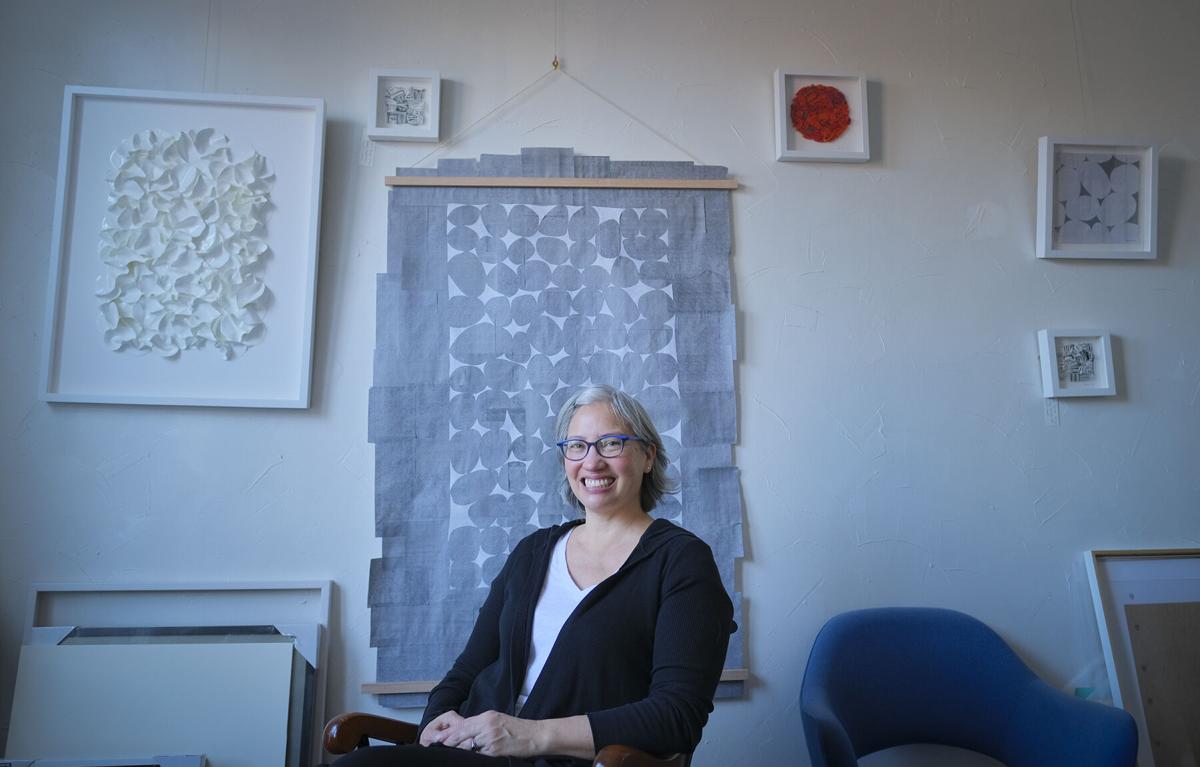 Bussie Parker Kehoe, a mixed-media artist, sits for a portrait with a selection of her pieces in her studio in Winston-Salem. 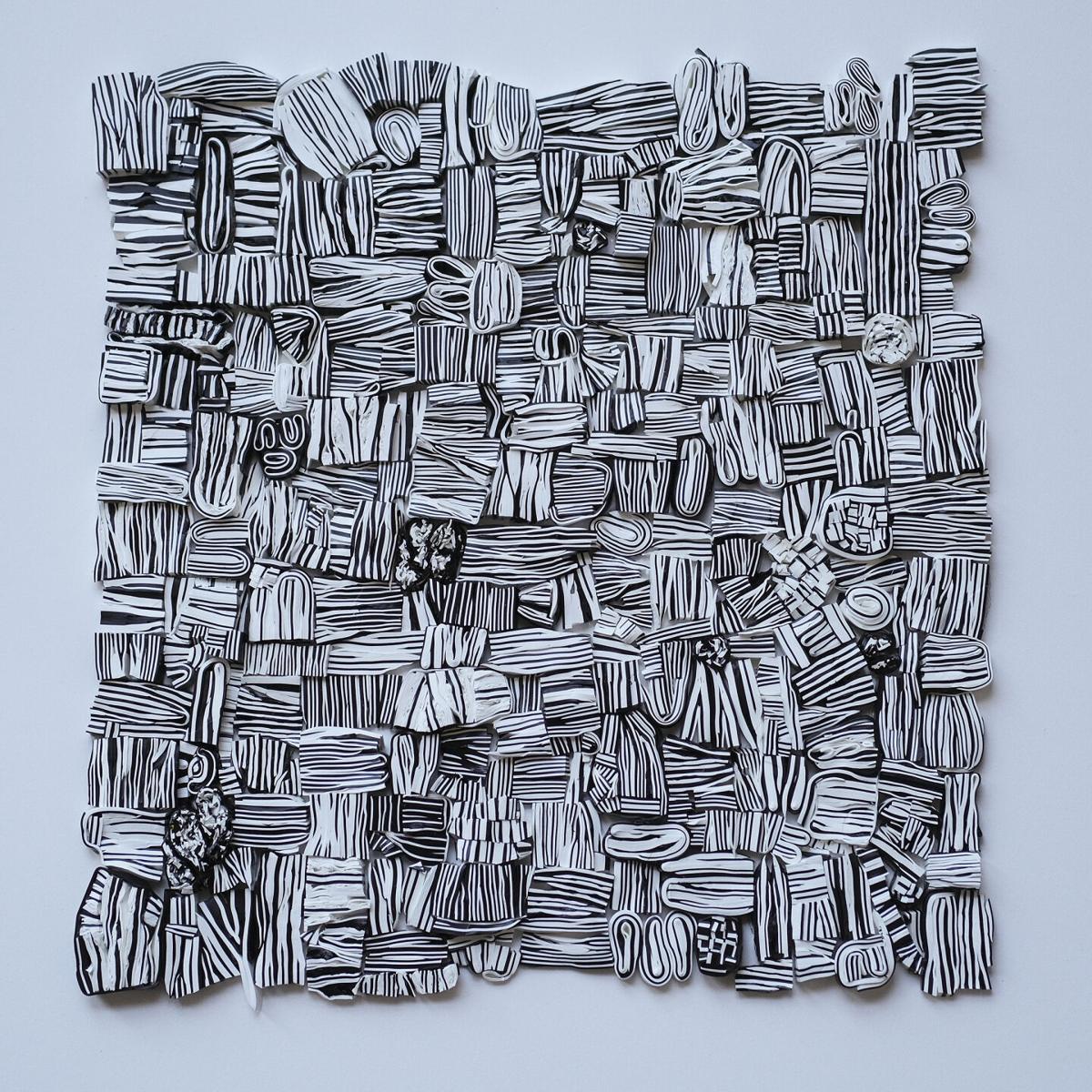 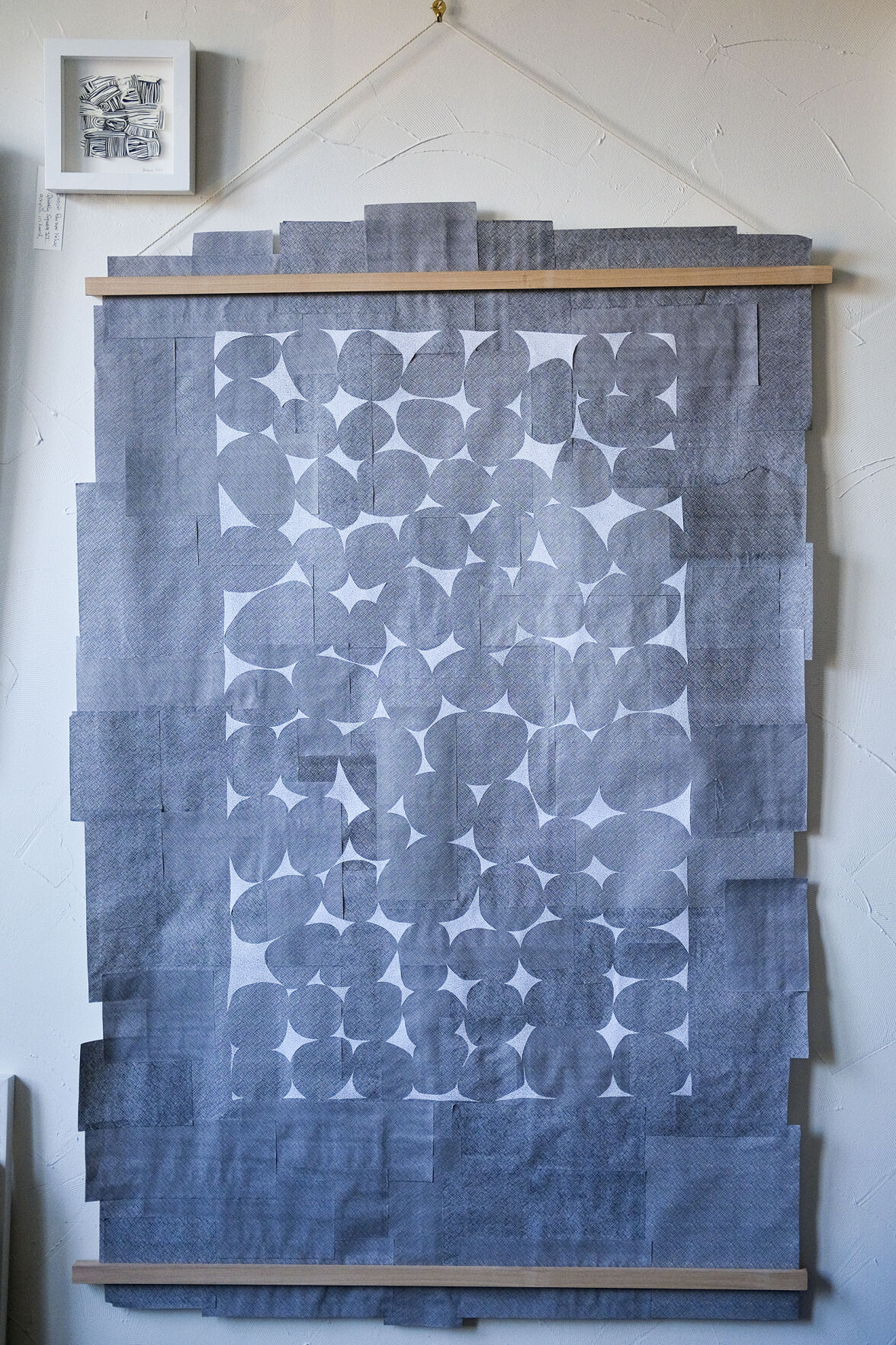 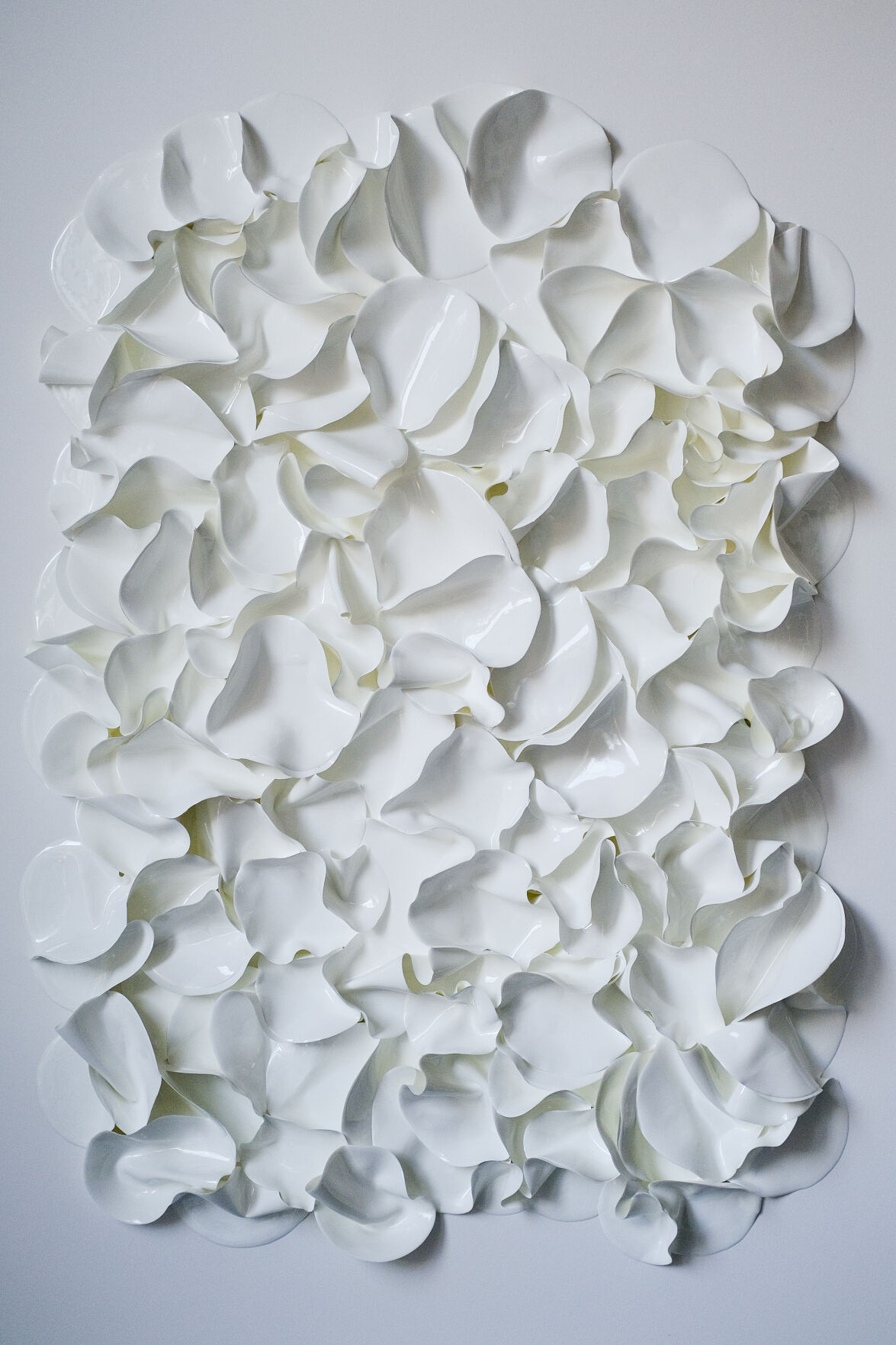 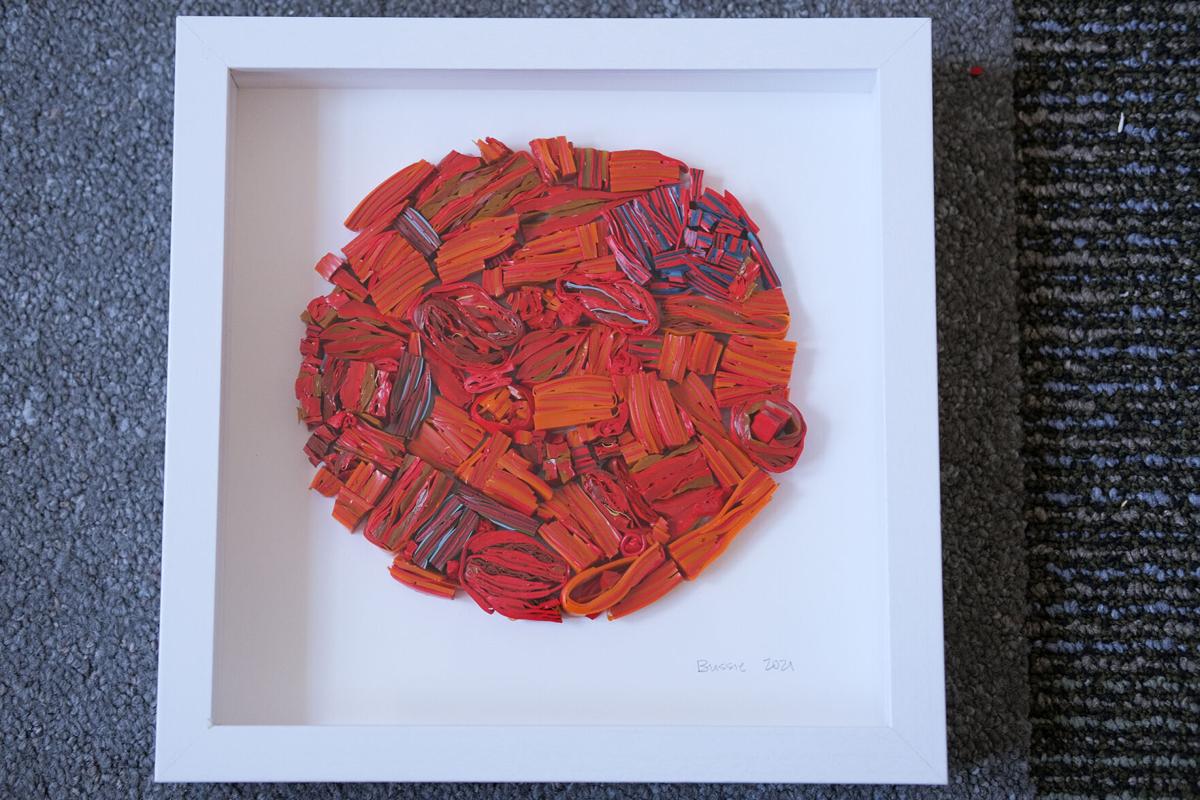 Although Bussie Parker Kehoe, a mixed-media artist in Winston-Salem, studied art in college, her focus was on becoming a lawyer.

In 1995, she graduated with a law degree from the American University Washington College of Law then worked in law in some form — writing or practicing — until 2003.

She became a preschool teacher after the birth of her third child and then an art teacher.

Kehoe said she loved teaching art and was motivated by the children to eventually do more of her own artwork.

“The children are so inspiring because they don’t know any rules,” Kehoe said. “When they approach any kind of art, the way they approach materials is so inspiring because there’s nothing stopping them and that’s what I’m trying to grasp. When I look at, like, acrylic paint, I don’t use it like a normal painter. I think it’s because I kind of channel how the kids would have looked at it.”

She did not focus on her own artwork until she and her family moved to Winston-Salem from Allentown, Pa., in summer 2017.

In 2018, she opened a working studio in Sixteen Over Six Artist Studio in the Downtown Arts District in Winston-Salem.

For years, Kehoe held onto boxes and boxes of things she had collected for her students when she was an art teacher, including old security envelopes, objects from nature, and old yarn and fabric. She recently parted with all of it, donating it to a local preschool teacher, except for the security envelopes.

“I’ve been cutting them out and making drawings and making collages out of them ... I’m trying to make a peaceful and/or organic piece where you wouldn’t know that it’s made out of envelopes,” Kehoe said.

Answer: I am working with two different media. I have been working with acrylic paint as a sculpting material. I pour acrylic paint onto glass, let it dry, then peel the dried paint off the glass and use it to make wall sculptures. My new direction is transforming paper — usually used security envelopes. I like to create organic shapes and hide the original material so that you can’t place it.

Answer: I studied drawing and printmaking in college. Then, I took a long hiatus working as a lawyer, preschool teacher and raising kids before opening my studio in downtown Winston-Salem. My first series focused on drawings of children in fantastical vignettes, called memory mirages. I poured acrylic paint to make the environment surrounding the children. Eventually, I enjoyed working with the poured paint more than drawing, and spent a lot of time tinkering with the paint. I have made dots, ruffles and large swaths of poured sheets out of acrylic.

I am currently compressing poured acrylic “skins” together and cutting them, then assembling them on board. Working with acrylic paint has been very exciting — so many discoveries! But I am aware of the amount of plastic I am putting out into the world — acrylic paint is plastic. That is why I am turning my attention toward my collection of security envelopes and other found objects.

Answer: Time. There isn’t enough time to do everything I want to do. I have scribbled ideas on loose pieces of paper all over the place, but I find it hard to find the time to work on every idea. The other challenge is balance: When focusing on the art, everything else goes by the wayside.

Answer: This is hard to answer because art is so much a part of me. Art is a form of communicating and expressing myself. It’s constant problem-solving, learning and growing. It’s essential to me.

Answer: Keep going and don’t worry about whether others like what you’re doing. You’re doing it for yourself. Work every day, even if you don’t know where to start. Be patient and gentle with yourself.

What: Artwork by Bussie Parker Kehoe

More: Kehoe will have a shared solo show with Beth Murray in April and May at Red Dog Gallery at 630 N Liberty St. in Winston-Salem, tentatively titled “Minimalist/Maximalist.”

PANDEMIC EDITION: Cash Bash 2021, a virtual concert benefiting The Ramkat in Winston-Salem and honoring Johnny Cash, will be at 7 p.m. Feb. 27…

FREE STUFF: Living Rhythms workshops by Tam Tam Mandingue Winston-Salem instructors will be held on the stage of the Andy Griffith Playhouse a…

ART AND NATURE: “Cross Pollination: Heade, Cole, Church, and Our Contemporary Moment” exhibition will open to the public Feb 23 and run throug…

ANNUAL CELEBRATION: Delta Arts Center will recognize and celebrate Freedom Day, the anniversary of Nelson Mandela’s release from prison, from …

Singer/songwriter and guitarist Bill Douglass uses range of subjects in his songs that are sometimes quirky, humorous

Along with his cultural observations, life and faith songs, singer/songwriter and guitarist Bill Douglass likes to write pieces that are quirk…

In 1997, Saxton Rose and his wife, Elizabeth Pacheco Rose, met in their junior year of undergrad in the music library at the University of Col…

Local pastor has been building guitars as a passion for years, hopes his craftsmanship will one day sustain him in ministry

When he's not working as a pastor or taking care of his newborn, Zach Dease builds guitars, specifically flat tops.

Bussie Parker Kehoe, a mixed-media artist, sits for a portrait with a selection of her pieces in her studio in Winston-Salem.