Vital markings: 20 years after Helen Frankenthaler’s death her art remains alive and lively, as evidenced by Weatherspoon exhibition
0 Comments
Share this
{{featured_button_text}}
1 of 2 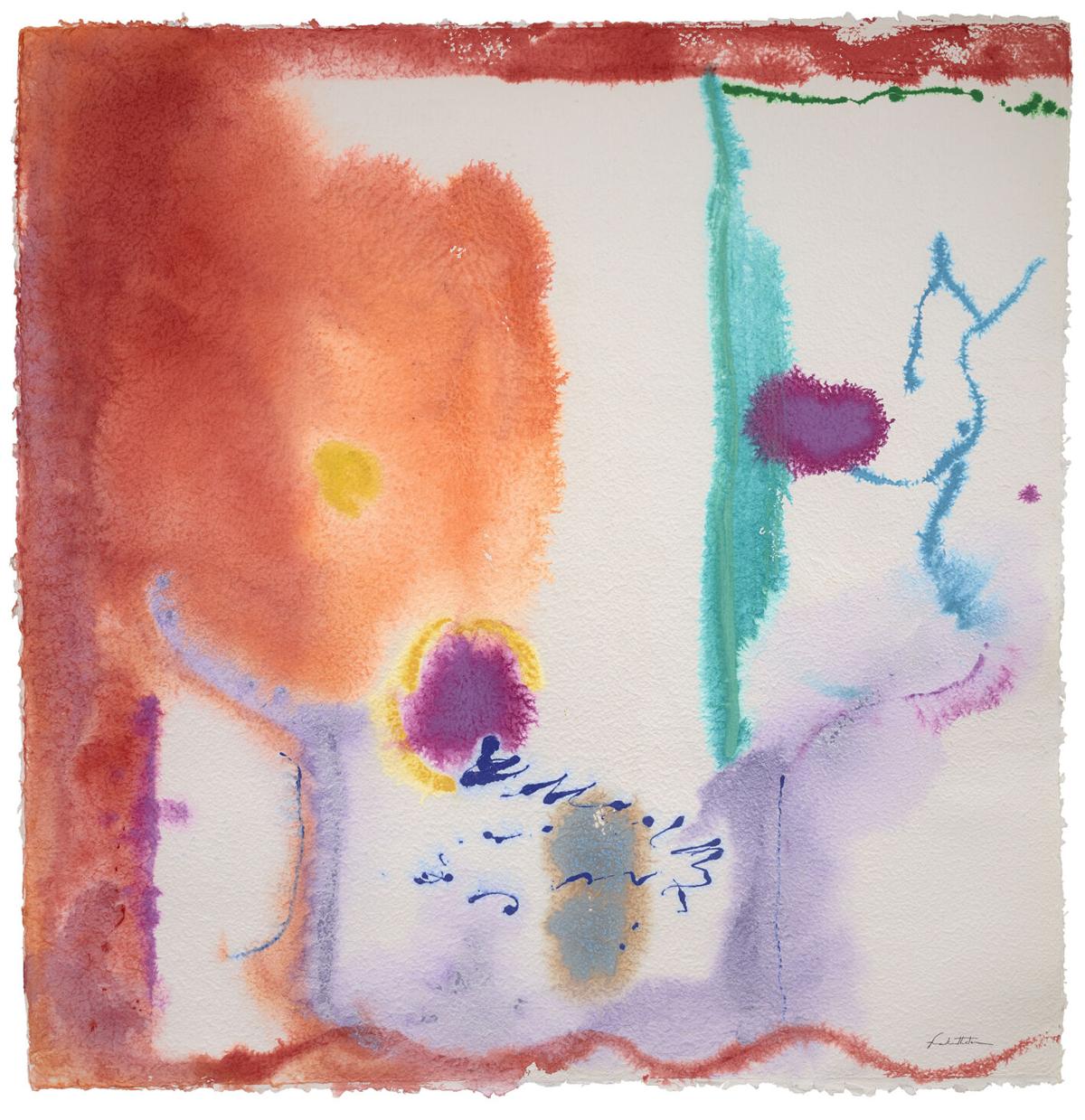 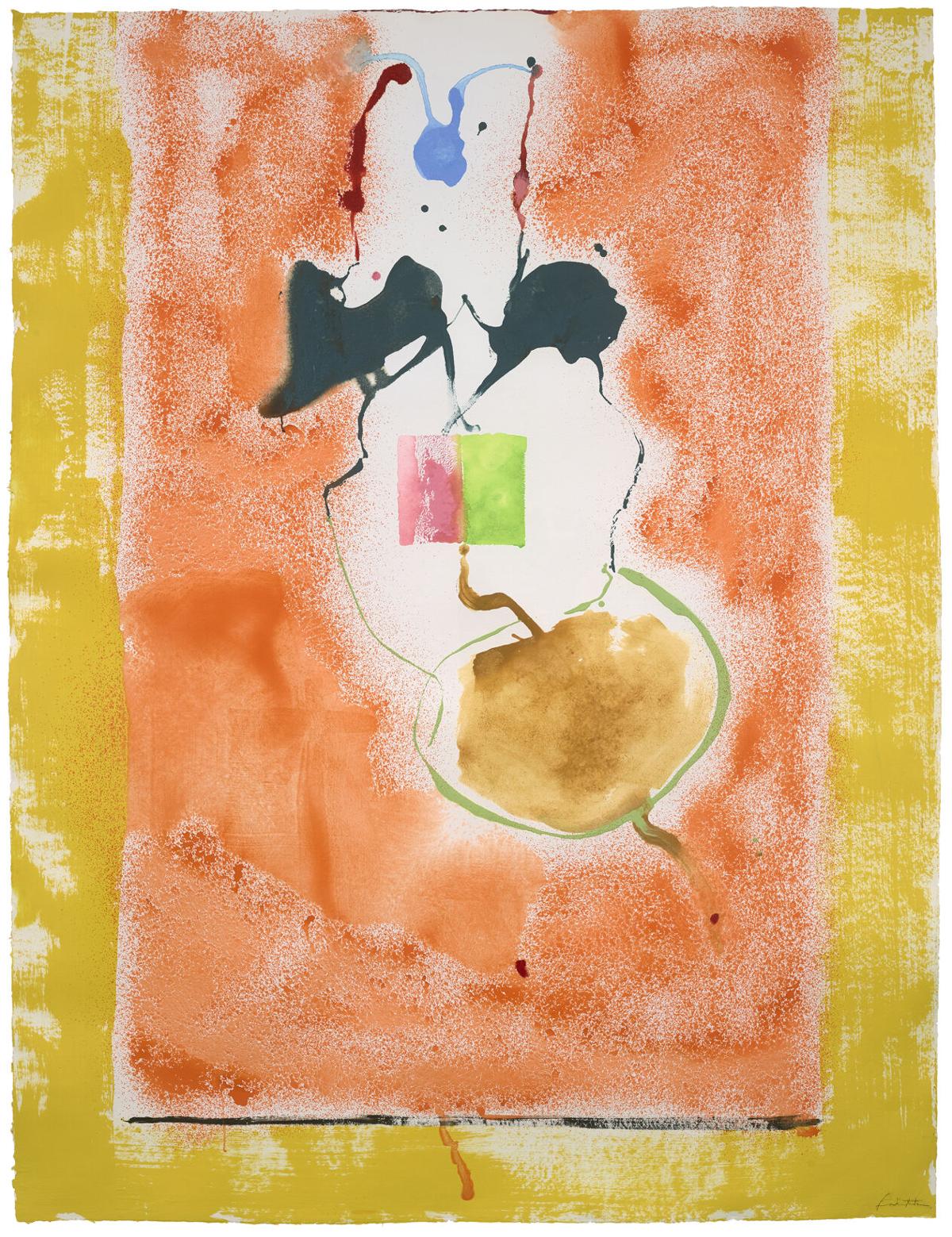 The word that springs promptly to mind in connection with Helen Frankenthaler’s art is “vitality.” One can see it — and feel it — in the Weatherspoon Art Museum’s exhibition “Helen Frankenthaler: Late works, 1990-2003.”

Occupying two adjoining, ground-floor galleries, the show brings together 22 works on paper ranging in size from about 6-by-9 inches to 7-by-7 feet, from a relatively late period in this iconic abstractionist’s remarkable career. On view through Saturday, it’s well worth a special trip to the Weatherspoon.

Judging from these works made when Frankenthaler was in her sixties and seventies, she hadn’t lost any of the aesthetic verve that characterized her work of the 1950s. That’s when she emerged on the American art scene as a young, fearlessly experimental abstract painter — an uncommon role for a woman in that pre-feminist era.

Born into an affluent, intellectual family, Frankenthaler received an early career boost from her personal relationship with Clement Greenberg, the era’s leading art critic and theorist. Her subsequent marriage to Robert Motherwell, her older, abstract-expressionist peer, was also helpful in maintaining her art-celebrity profile. Not that her work requires any biographical backup, but these affiliations confirm a capacity to hold her own with the “big boys.”

Her trajectory as a painter led her through a series of stylistic phases related to abstract-expressionism, the dominant mode of American art when she began exhibiting in the 1950s. Like her painting peers and the jazz musicians they emulated, she learned early on to value spontaneity over compositional planning.

Early in the 1960s Frankenthaler began applying turpentine-diluted oil paint directly onto unprimed canvases — a distinctive technique she called “soak-stain,” which yielded an effect similar to watercolor. Critics during this era coined the term “color-field painting” to characterize work by her and her contemporaries who favored large areas of color and downplayed emotional content.

Soon Frankenthaler abandoned oil paint for acrylics, which she could employ more thickly to yield brighter colors. By the time she created the earliest works in the Weatherspoon show she had also switched from canvas to paper as her preferred painting surface. Despite all these changes, her work retained certain recognizable traits, especially her signature brand of spontaneity.

Ten years after her death, Frankenthaler’s reputation has endured, and new generations of viewers continue to engage with her work. It remains very much alive, as this show reveals.

Frankenthaler once described painting as “a constant process of renewal and discovery” — a notion implicit in her use of the title “Beginnings” for a large painting she made in her mid-sixties. Measuring roughly seven feet square, it’s a striking composition in predominant shades of yellow, peach and lavender, vaguely suggesting a landscape with shapes and markings that suggest a tree, a sauntering stick figure and zigzagging blue lines that might describe a bird’s erratic flight pattern.

Allusions to landscape are also evident in two other relatively large, lyrical paintings from the same time period, “Aerie” and “Flirt.”

A pair of green, vertical stripes in the latter painting have their more emphatic counterparts in an untitled painting from 1996. Measuring roughly 3-by-5 feet, this predominantly black painting deviates from Frankenthaler’s more recognizably works due to its predominance of right-angled geometry over spontaneous gestures.

Likewise divergent from Frankenthaler’s signature compositions is her 1995 painting “Cassis.” With its tightly stacked configuration of dark, horizontal stripes across the center, it resembles nothing so much as a fireplace mantel on a dark-shadowed, green background. Given such a reading, this painting’s pink and yellow rectangles might signify objects on display.

Among its other notable features, this exhibition highlights Frankenthaler’s sustained commitment to visual experimentation. Its curator Douglas Dreishpoon aptly summarized her late work in an accompanying essay.

“Graced with memorable encounters, a vast art-historical image bank, and technical prowess,” he wrote, “the aging artist moved in whatever direction suited her mood and imagination.”

Locally this show marks a homecoming for Dreishpoon, who was the Weatherspoon’s curator of exhibitions from 1995 to 1998. After leaving North Carolina he served as chief curator at the Albright-Knox Art Gallery in Buffalo, NY. He organized this traveling show in his current capacity as director of the Catalogue Raisonné project at the Helen Frankenthaler Foundation in New York.

A high-end “hotel on the rails.” A mixed group of society folks and their attendants. Trapped by a snowstorm in Yugoslavia, a traveler is murd…

Patricia Hymes and her husband, Harold, of Winston-Salem were walking the fairgrounds at the Carolina Classic Fair Saturday on a “day date” wh…

The musical, which is family friendly and appropriate for all ages, tells the story of a square pumpkin living in a round pumpkin patch and his struggle to fit in.

Artist Marianne DiNapoli-Mylet created the STICKIT while in quarantine during the coronavirus pandemic. A STICKIT is a small sculpture in static motion created from sticks and paper about 18 inches tall.