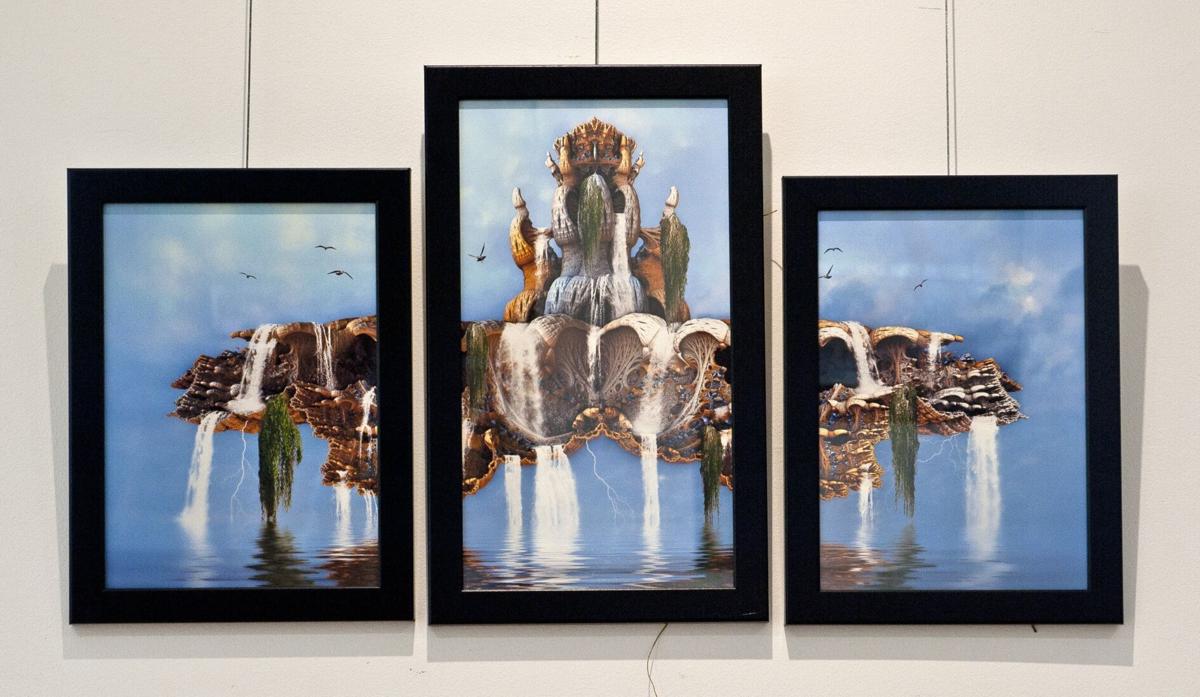 Hal Tenny's triptych "Up from the Deep" from his show at the Stokes County Arts Council's Apple Gallery in Danbury. He is the featured artist in the gallery through July 31. 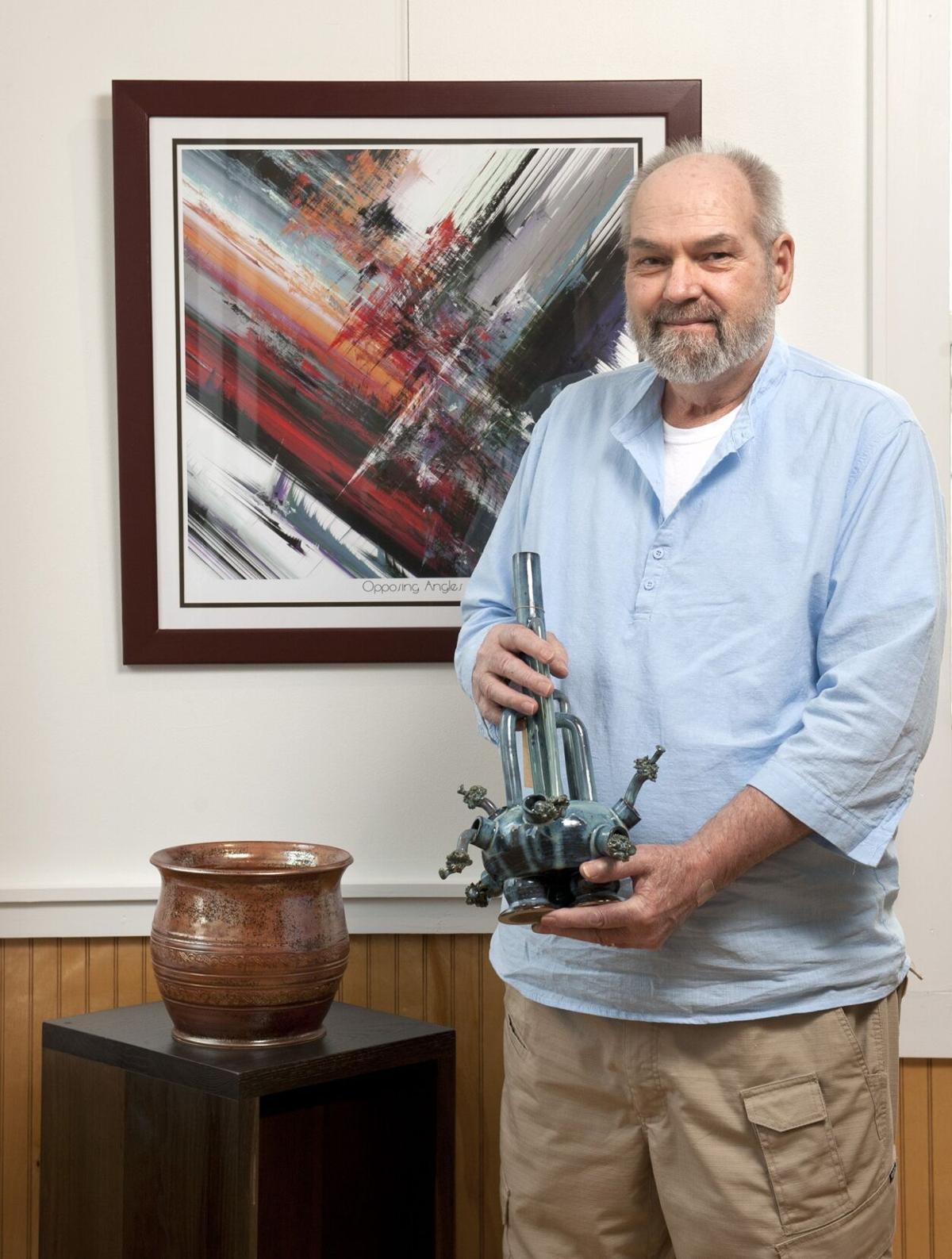 Hal Tenny with some of his art July 9 in Stokes County Arts Council's Apple Gallery in Danbury.  Behind him is a piece of abstract fractal art titled "Opposing Angles." He holds a piece of pottery titled "Blue Tubular Vase" and on the pedestal is a large flower pot." 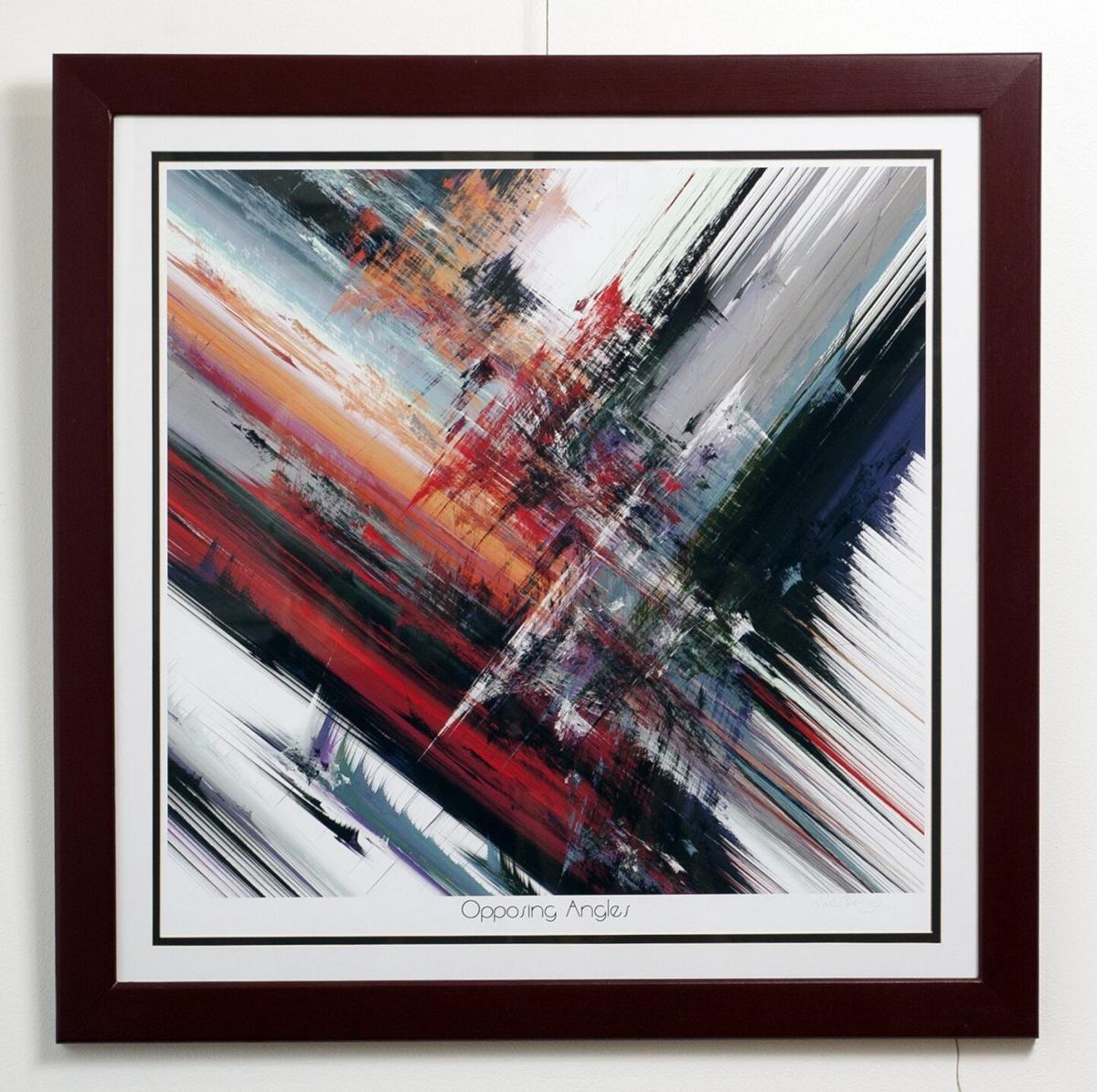 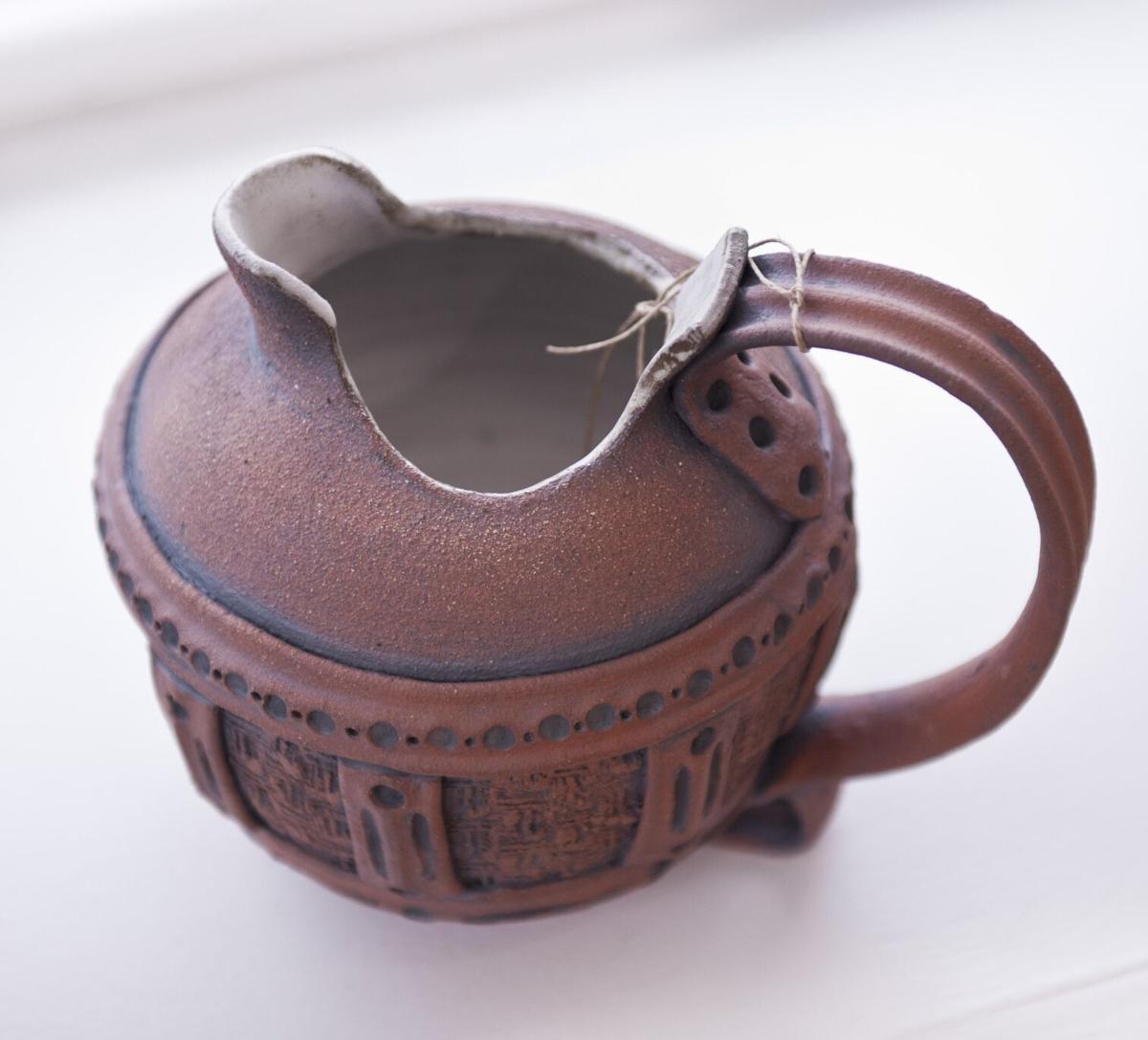 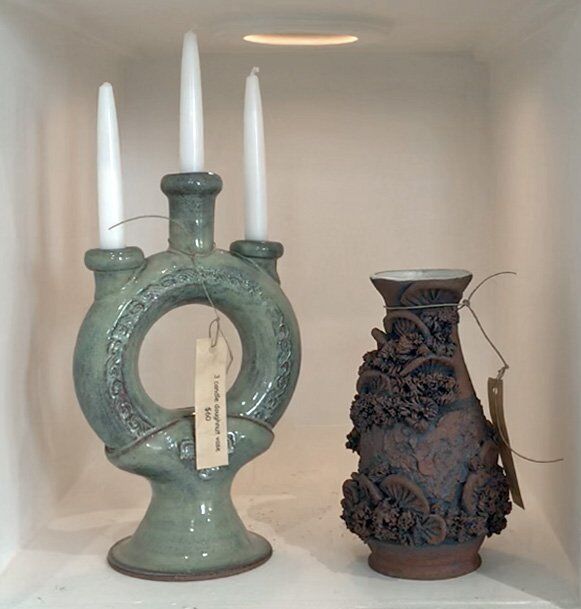 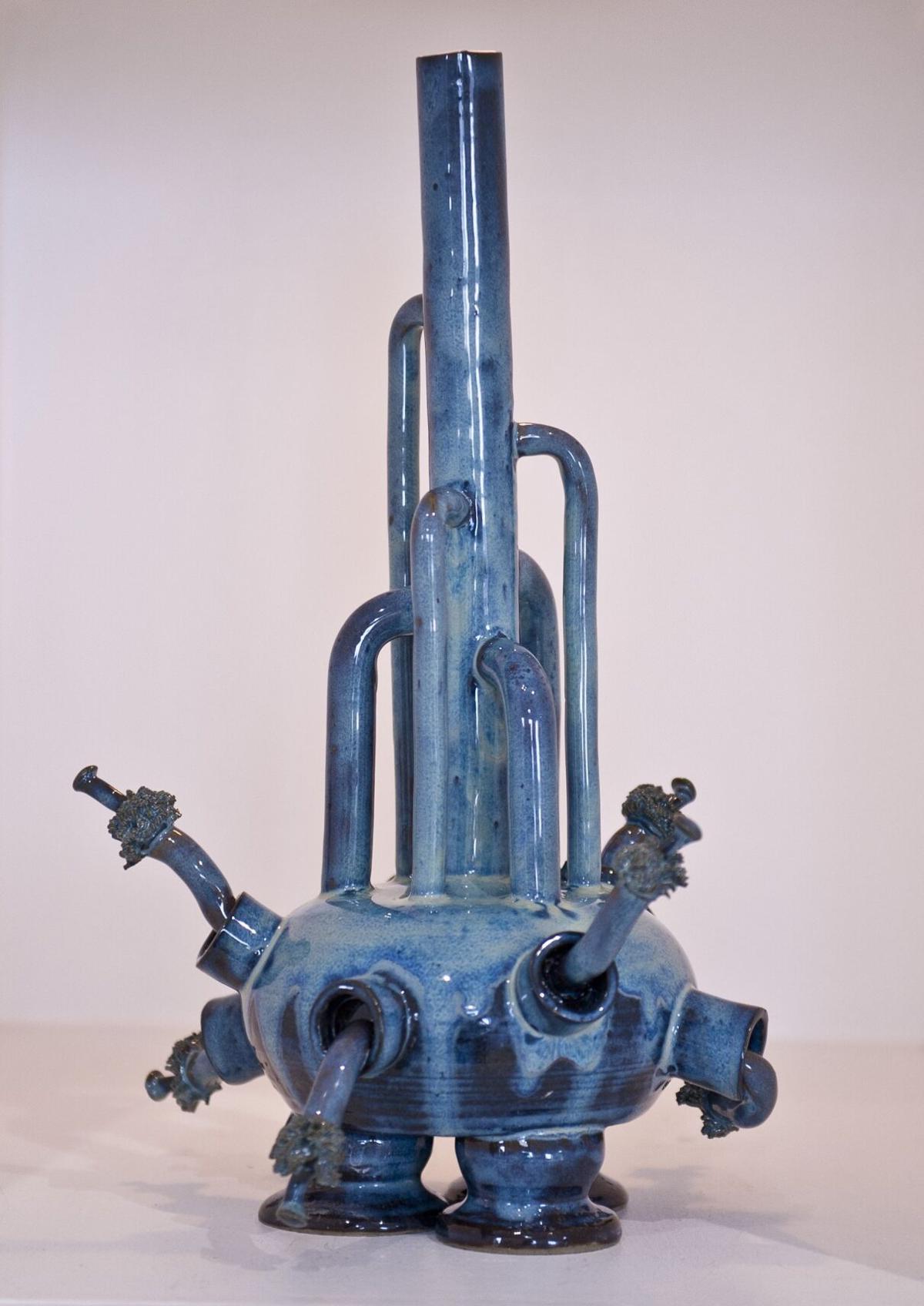 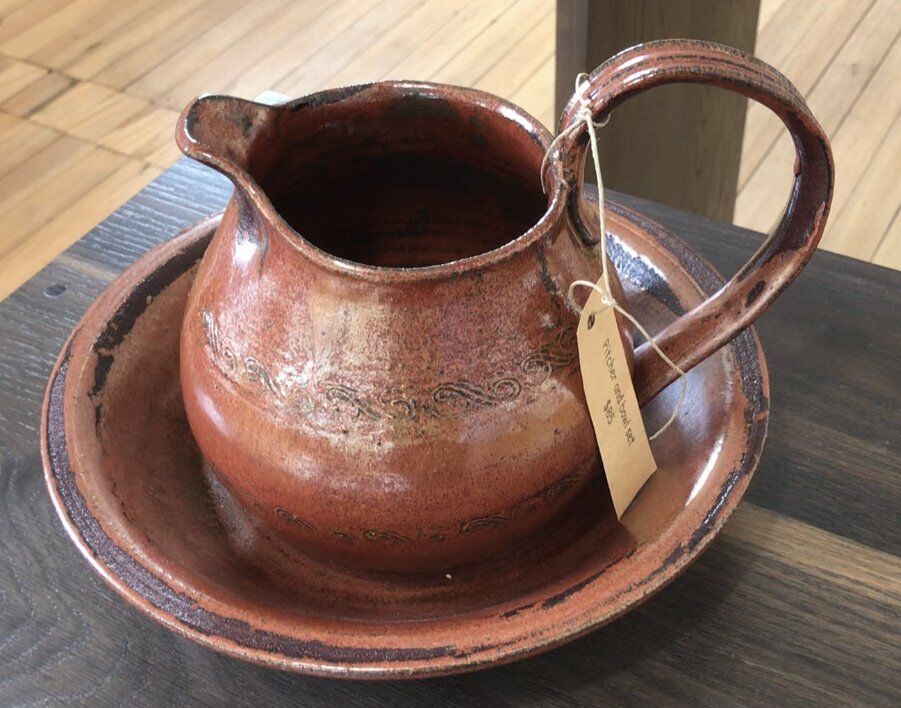 A pitcher and bowl from Hal Tenny's show at the Stokes County Arts Council's Apple Gallery. 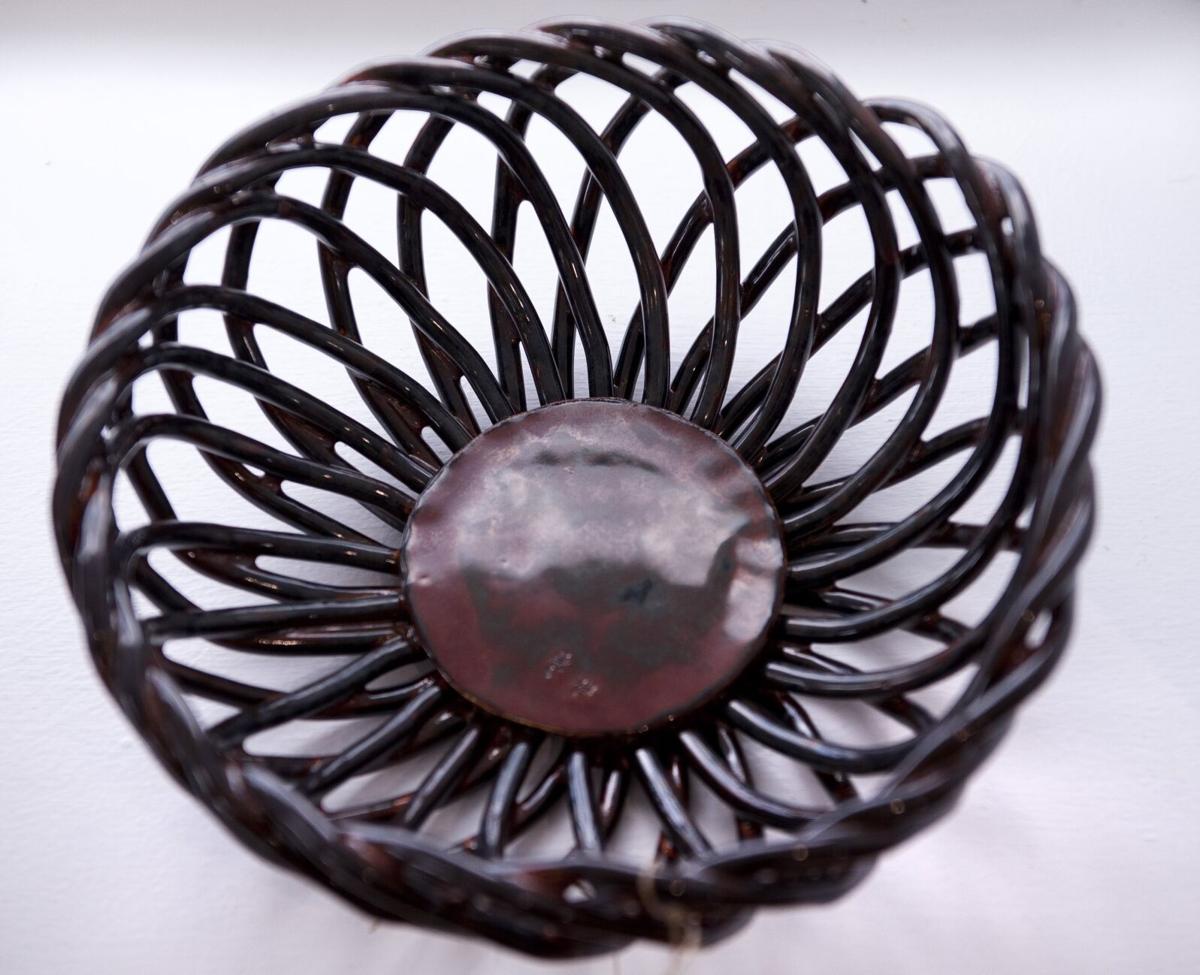 Hal Tenny's round woven bowl from his show at the Stokes County Arts Council's Apple Gallery. 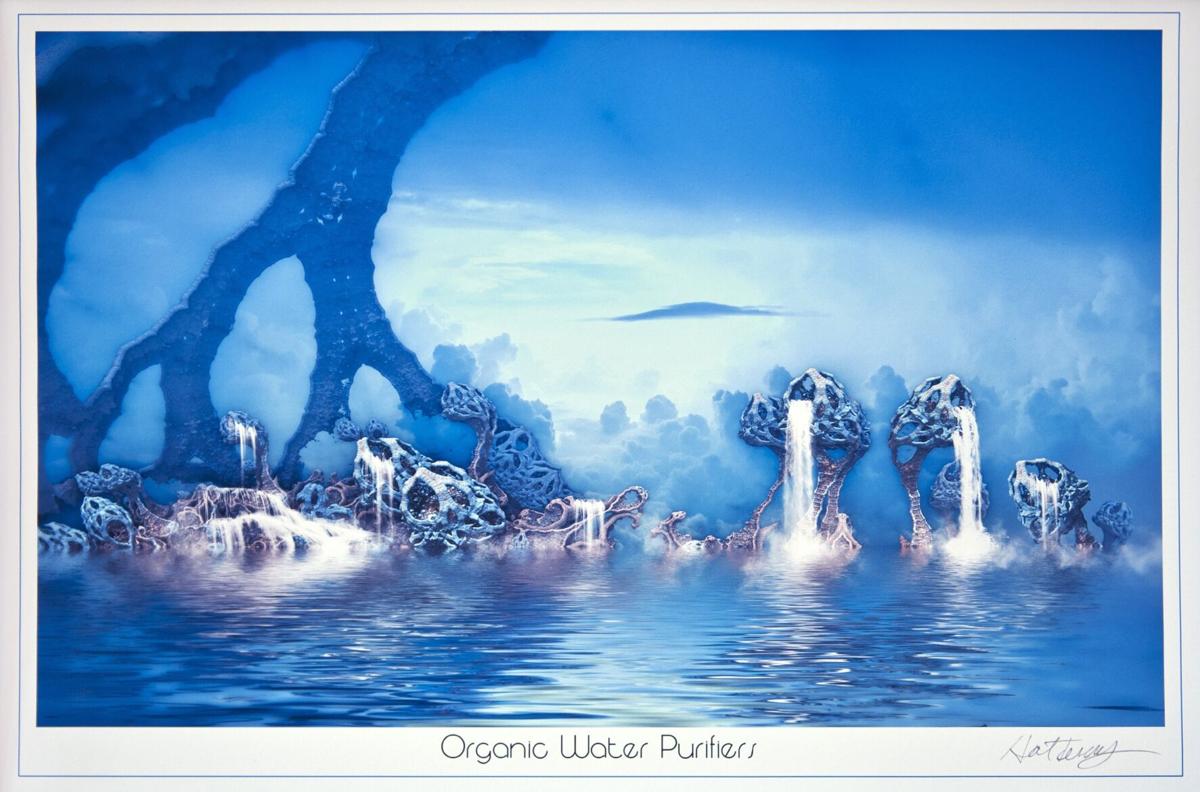 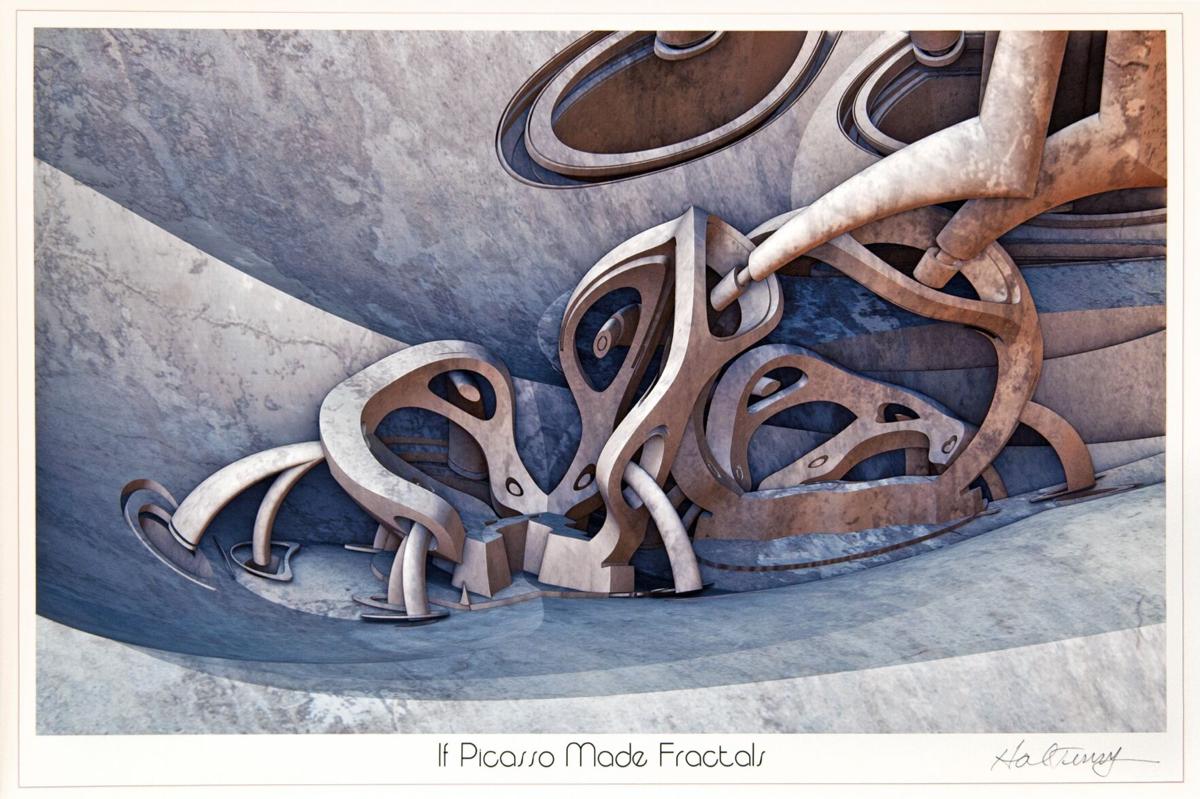 Hal Tenny's print "If Picasso Made Fractals" from his show at the Stokes County Arts Council's Apple Gallery. 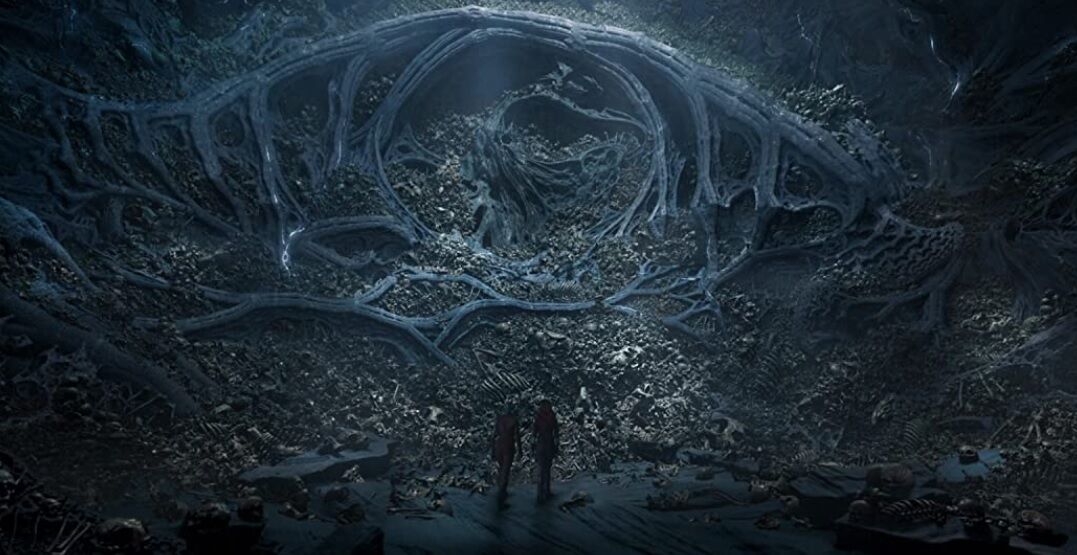 The underground caverns in “Guardians of the Galaxy Vol. 2” were almost entirely based on Hal Tenny’s fractal artwork. 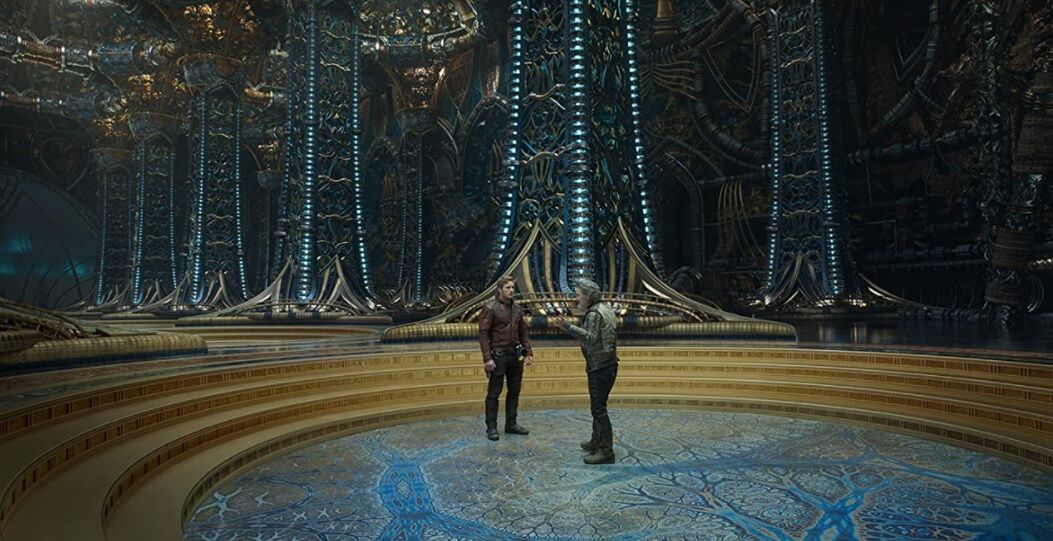 Chris Pratt (left) and Kurt Russell in in a scene from "Guardians of the Galaxy Vol. 2."

As an avid fan of science fiction, Hal Tenny didn’t know what to think when he was contacted in late 2015 about the possibility of working as a visual consultant on the film “Guardians of the Galaxy Vol. 2.”

James Gunn, the film’s director, had always been one of Tenny’s daughter’s favorite directors, and now, Ramsey Avery, the film’s supervising art director, was emailing him.

“I thought it was a hoax, so I immediately Googled the person’s name to make sure he was a real person and what he actually did,” Tenny said. “Then I was floored because I’ve never done anything close to that before.”

Throughout his consulting work on the film, Tenny was able to do everything at home, mostly via email. Much of his fractal work was further conceptualized by other concept artists, as well as four or more visual effects companies.

“I initially sent them probably over 300 images as sampling images for them to look at and see if they could use them anywhere,” he said. “From there, they took a lot of that imagery and shared it with other concept artists. They might have further modified the image or worked with the image or combined images to come up with finished designs for the actual film itself.”

Tenny said he makes it clear to people that very little of what he sent to the film’s art department was used in the film the way he sent it.

“I supplied a lot of the background imagery that the artwork was created on or by,” he said.

“Guardians of the Galaxy Vol. 2,” produced by Marvel Studios, was released in 2017, and Tenny’s fractal art was featured prominently in the film. His art appeared exclusively on the planet ‘Ego’ and was used in part to create ‘Ego’s’ palace, various floor and wall designs, as well as furniture and separate bedroom buildings. Much of the underground caverns were almost entirely based on his fractal work.

Tenny received onscreen credit as a concept artist for his work.

During the initial release dates, members of Tenny’s family viewed the film and took pictures of his name in the credits, but Tenny waited for a while.

“I’m just not a fan of big crowds,” he said. “I wanted to go when the theater had emptied out a little bit and there was less of a crowd.”

He described his experience of finally seeing the film as surreal.

“It was something else,” he said. “It was quite an experience. The 15-minutes of fame. It was well worth it.”

Originally from Horseheads, N.Y., Tenny has also lived in Rochester, N.Y. In 1988, he moved to Lincolnton, N.C., for a job in construction.

Although he always did construction work for a living, he majored in art and music in high school, where he also learned to use a potter’s wheel.

“After I graduated, I bought my own potter’s wheel,” Tenny said. “I just did it more or less for a hobby, but I did sell pottery.”

After six years of selling his pottery, Tenny stopped.

But, for some reason, he decided to bring his potter’s wheel and his kiln to fire the pottery along when he moved to North Carolina in the late 1980s.

At 66, Tenny is retired from the construction business. He and his wife, Annette, live in Danbury with their son and daughter and two grandchildren.

Tenny has been doing his fractal art since 2009. He said he saw his daughter, Sarah Barbour, working with them a little bit. Then he noticed fractal art online and picked it up as a hobby.

Four years ago, he started taking his fractal prints to The Arts Place, a retail market in Danbury. He noticed there was a lot of pottery there and had been thinking of getting back into pottery, so he decided to take up his old hobby again.

He has received several awards and recognitions for his work. He received a best of show award at the Hammondsport Art Festival in New York. His fractal work was selected as one of the 25 winners in the Benoit Mandelbrott Fractal art Contest 2011. That same fractal piece was chosen by the editor as the cover art for the magazine REDES.

In May 2011, Tenny participated in the invitation only digital art exhibition “The Digital Palette” sponsored by Paper New England at the Artspace Gallery in Hartford, Conn.

In addition to his artwork, Tenny enjoys woodworking and has a woodworking shop that shares space with his pottery studio.

He spends most of his time creating art and reading. His favorite books are science fiction and horror books, particularly those written by Stephen King.

Tenny has written and self-published two science-fiction adventure novels — “Standard Affair” and “Vinn Affair.” He has also written two short story collections — “Horror Takes a Holiday” and “Waves in Time” — and several single short stories. All of them are available on Amazon and Kindle books.

The Stokes County Arts Council will present an exhibit of Tenny’s original pottery and fractal art in its Apple Gallery in Danbury now through July 31.

He has about 25 framed images hung on the wall, as well as matted images and loose prints.

This show offers images of various themes, but most of the artwork is science fiction and fantasy based. In addition, there are some abstract and organic like images on exhibit. They are all fractals created with a combination of math formulas and adjustments of their given variables. In some images, Tenny has composited into the work real-life objects and plants to create surreal images.

“I may call something a plant, but it’s not a plant that you’ve ever seen, because it’s made from a fractal and it looks kind of alien almost,” he said.

Although he creates traditional pottery such as plates, bowls and coffee mugs, Tenny also likes to manipulate clay into designs that are almost like sculpturing.

“I combine wheel-thrown pottery and sculpting into some of the pieces,” he said, adding that he typically comes up with something strange or odd.

“He is constantly coming up with new ideas, new glazes to keep it fresh and exciting,” Godwin said.

She, personally, has several pieces of his ceramic dinnerware and fractal art prints.

“His dinnerware is functional, but it looks like art to me,” Godwin said. “I have this glass that has three little legs on it, and it’s my favorite cup.”

She said Tenny’s use of bright colors and handmade and painted frames draw her to his fractal art.

“He makes his own frames,” Godwin said.

“I try to keep the pricing reasonable,” he said. “I’ve got this saying: ‘The artwork goes in someone else’s house instead of creating interesting dust patterns on my shelf.’”

What: Original pottery and fractal art by Hal Tenny of Hal Yeah Pottery

When: Now through July 31

More: Tenny’s books and other literary works are available on Amazon and Kindle books.

Kim Kardashian is in a legal tussle over new brand name

Whodunit: Local actor loves a late-stage clue that shakes up the plot in a murder mystery

The featured exhibition in the DADA Members Gallery will be “I’m a Big Fan!” a show by Holli Conger and Walker Conger at North Trade Street Arts, 604-A N. Trade St.

Tattoo Archive takes visitors back in time through its tattoo museum, bookstore and changing exhibits

Tattoo Archive offers more than custom tattooing. The business in Winston-Salem also has a tattoo museum and bookstore.

Spirits in the wood: Exhibition at SECCA highlights home-built guitars and other works by a self-taught artist from rural eastern North Carolina

“The Voyage of Life: Art, Allegory and Community Response” exhibit at Reynolda House to open to public July 20

Hal Tenny's triptych "Up from the Deep" from his show at the Stokes County Arts Council's Apple Gallery in Danbury. He is the featured artist in the gallery through July 31.

Hal Tenny with some of his art July 9 in Stokes County Arts Council's Apple Gallery in Danbury.  Behind him is a piece of abstract fractal art titled "Opposing Angles." He holds a piece of pottery titled "Blue Tubular Vase" and on the pedestal is a large flower pot."

A pitcher and bowl from Hal Tenny's show at the Stokes County Arts Council's Apple Gallery.

Hal Tenny's round woven bowl from his show at the Stokes County Arts Council's Apple Gallery.

Hal Tenny's print "If Picasso Made Fractals" from his show at the Stokes County Arts Council's Apple Gallery.

The underground caverns in “Guardians of the Galaxy Vol. 2” were almost entirely based on Hal Tenny’s fractal artwork.

Chris Pratt (left) and Kurt Russell in in a scene from "Guardians of the Galaxy Vol. 2."