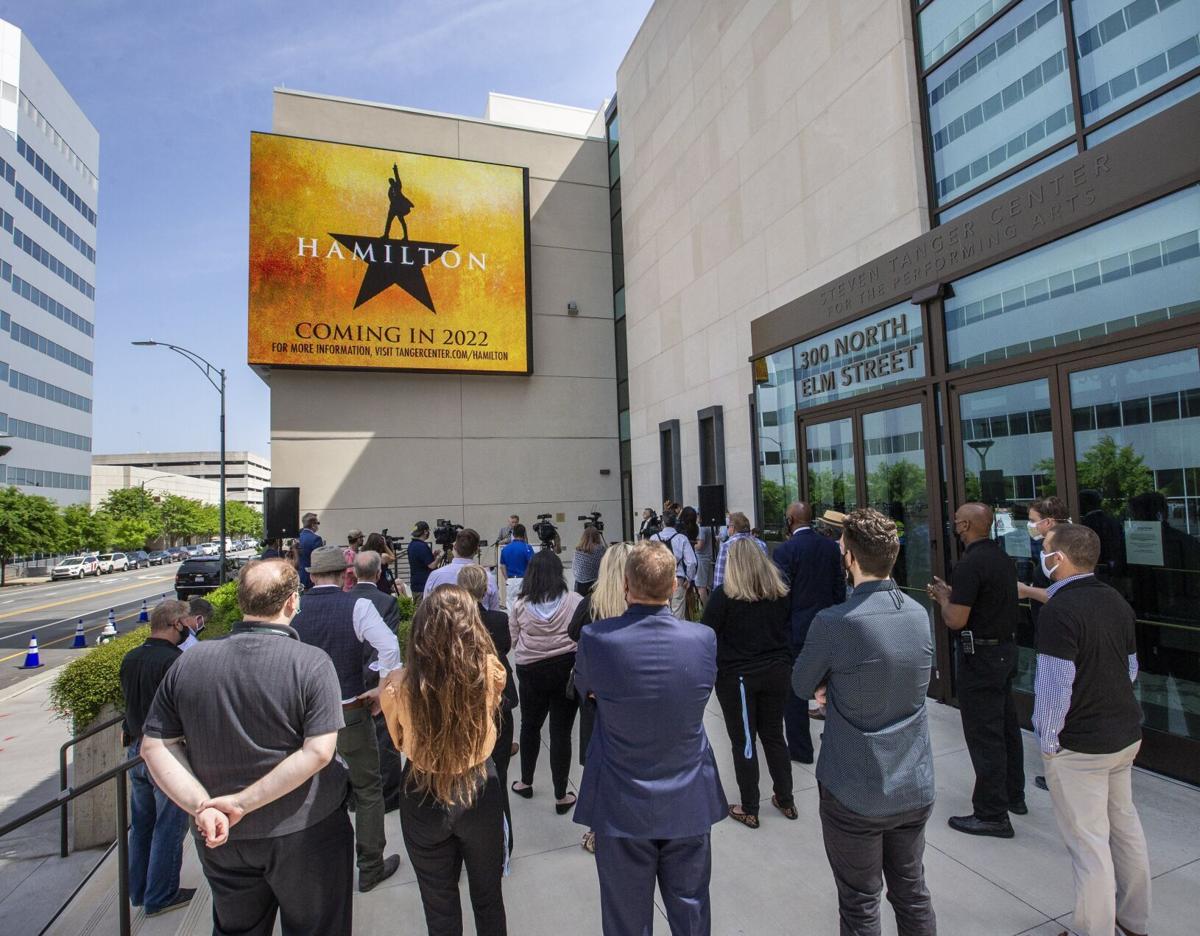 People listen to officials at the press conference where it was announced that "Hamilton" is coming in 2022 to the Steven Tanger Center for the Performing Arts in Greensboro, N.C., on Tuesday, May 4, 2021. 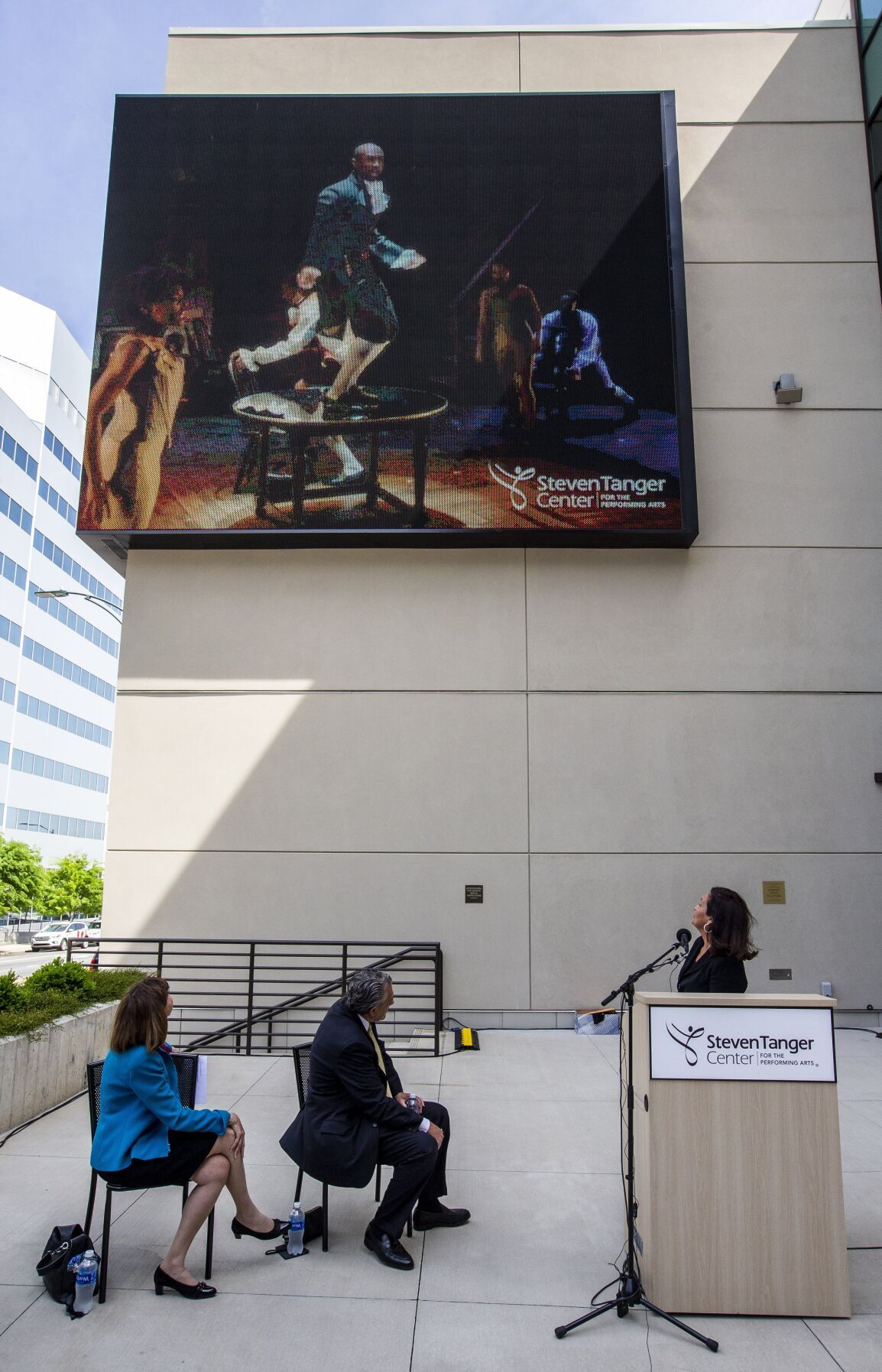 Mayor Nancy Vaughan looks up at a video clip from the Broadway show "Hamilton" during the press conference at the Steven Tanger Center for the Performing Arts in Greensboro, N.C., on Tuesday, May 4, 2021.

GREENSBORO — Triad audiences can be in "the room where it happens" when the Broadway megahit "Hamilton" comes to the Steven Tanger Center for the Performing Arts in 2022.

They gathered outside the Tanger Center as a video clip from "Hamilton" played on the marquee.

The venue had been scheduled to hold its grand opening in March 2020, but the COVID-19 pandemic has kept it closed. Its opening date has not been announced.

"Today’s very special announcement, before the Tanger Center has even opened, proves that Greensboro and the entire Piedmont Triad region will have the opportunity to enjoy the very best in touring live entertainment," Brown told the crowd.

Go online to TangerCenter.com/Hamilton for details on how to purchase tickets.

Prices will start at $49 plus taxes and ticket fees, and will vary by seat location and performance.

The story of United States founding father Alexander Hamilton created a revolutionary moment in theater, with a score that blends hip-hop, jazz, R&B and Broadway music.

That scores features songs such as "My Shot," "The Story of Tonight" and of course, "The Room Where It Happens."

The cast for this production has not been announced.

The Tanger Center, a 3,023-seat, $93 million venue at 300 N. Elm St., resulted from a partnership between the city of Greensboro and private donors.

The Greensboro Coliseum complex will manage it.

Brown said that the goal is to open the Tanger Center before the inaugural Broadway season starts Oct. 6.

But it first has to line up music stars to perform. Those artists have a lot to organize before taking a tour on the road, he said.

A revised schedule calls for its first Broadway season to open Oct. 6 with the touring show, "Wicked." More than 16,000 Broadway subscribers have bought season seats.

But audiences also have clamored for "Hamilton."

Brown thanked Nederlander, PFM and subscribers for making it happen.

"Attracting the most popular touring Broadway show in the world would not have been possible without the support of the 16,435 Broadway series subscribers," Brown said.

Those current Broadway season seat members will have first access to their same reserved season seats for "Hamilton."

A limited number of new inaugural Broadway season seat memberships are currently available. New members will be granted access to purchase season seats to "Hamilton" as part of their membership.

Broadway season seat members must pay their "Hamilton" invoice by May 21 to retain their same seat for the show.

The public on-sale date for individual tickets to "Hamilton" will be announced later.

With script, music and lyrics by Lin-Manuel Miranda, direction by Thomas Kail, choreography by Andy Blankenbuehler, and musical supervision and orchestrations by Alex Lacamoire, "Hamilton" is based on Ron Chernow’s biography.

It has won Tony, Grammy and Olivier Awards, the Pulitzer Prize for Drama, and an unprecedented special citation from the Kennedy Center Honors.

The national tour performed in 2018 at the Durham Performing Arts Center. It is scheduled to return to DPAC from May 17 to June 5, 2022.

Before she was elected to Congress, Manning was the chief private fundraiser for the Tanger Center effort.

Manning said she looks forward to seeing "Hamilton" on its stage.

"The Tanger Center is an extraordinary example of people coming together in a remarkable public-private partnership to create something that will spur our economy and benefit our community for generations," Manning said.

What: National touring production of "Hamilton"

Tickets: Start at $49, plus taxes and fees. Current Broadway season subscribers will have first access to their same reserved seats for "Hamilton." A limited number of new inaugural season Broadway season seat memberships are available. The public on-sale date for individual tickets to "Hamilton" will be announced in the future.

Gnashing teeth and sharpened knives: Woodie Anderson’s solo show at Artworks Gallery reveals an industrious, enterprising artist with a lot on her mind

Industrious and enterprising are the first words that come to mind when seeing Woodie Anderson’s solo exhibition at Artworks Gallery.

Bladesmith and U.S. Army veteran Fermin Lopez of Winston-Salem uses his craftsmanship to help other veterans. He has appeared on the TV show "Forged in Fire."

Robinhood Plaza in Winston-Salem has a new mural on the east side of the building and an event area in the parking lot. Winston-Salem artist Laura Lashley created the large mural that is a tribute to women, especially five from that community. Robinhood Plaza will host food trucks June 12 to celebrate the completion of the mural.

School of the Arts Drama wraps virtual festival with ‘Neaptide’

The final production in the UNC School of the Arts’ “Contemporary Voices: A Virtual Theater Festival” will be Sarah Daniels’ “Neaptide.” As wi…

When The Barn Dinner Theatre in Greensboro reopens June 19, patrons will notice changes since the COVID-19 pandemic closed it temporarily 15 months ago. But it still will serve up dinner and a musical.

People listen to officials at the press conference where it was announced that "Hamilton" is coming in 2022 to the Steven Tanger Center for the Performing Arts in Greensboro, N.C., on Tuesday, May 4, 2021.

Mayor Nancy Vaughan looks up at a video clip from the Broadway show "Hamilton" during the press conference at the Steven Tanger Center for the Performing Arts in Greensboro, N.C., on Tuesday, May 4, 2021.