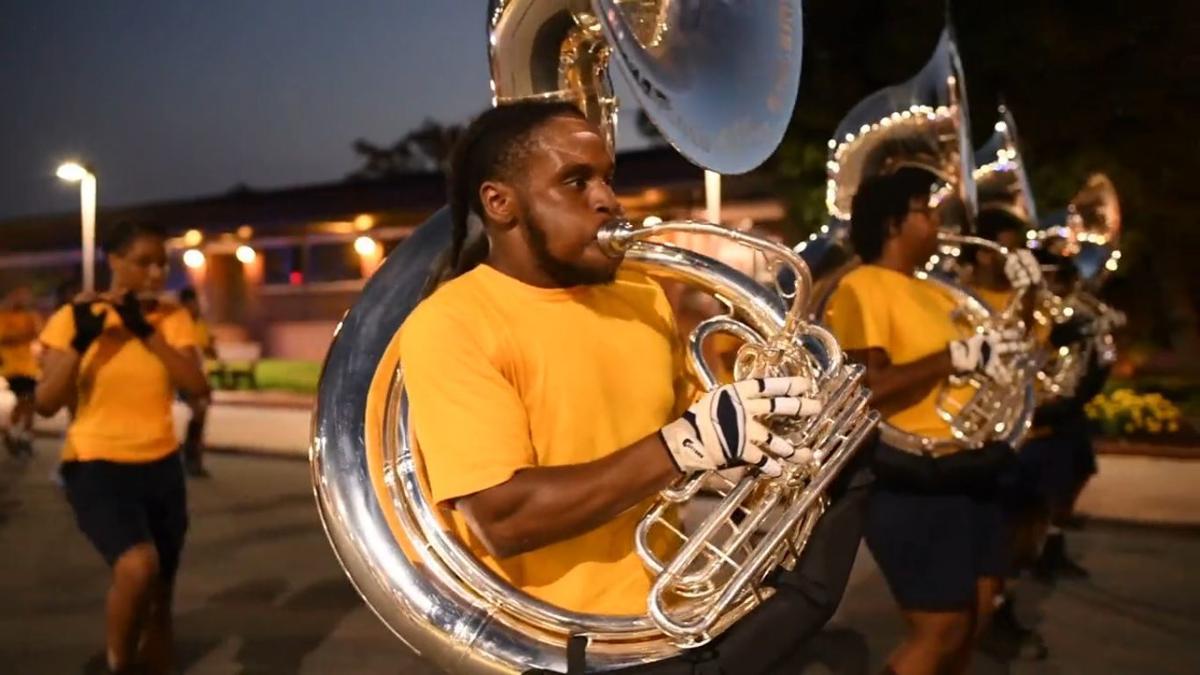 “Blue and Gold Marching Machine,” a short film completed as a class project at Randolph Community College in Asheboro, will be shown at the RiverRun International Film festival in Winston-Salem. Follow along as 200 musicians and dancers celebrate the 100th year of the N.C. A&T marching band, from band camp to the “Greatest Homecoming on Earth.”

RiverRun International Film Festival is presenting two features through its online Virtual Theater platform at riverrunfilm.com/virtual-theater through the end of February.

In celebration of Black History Month, RiverRun will offer this free block of short films originally selected to screen during the 2020 festival. The films are new cinematic work from Black creators and collaborators.

The films, including two short documentaries and two short narrative works, are:

The Little Theatre of Winston-Salem will present the world premiere of “Hadleyburg High” at 7:30 p.m. March 5 on the company’s YouTube channel.

This virtual play will continue to stream on demand through March 14.

Hadleyburg High is the perfect high school with perfect students who get perfect grades and live perfect lives. Or is it? When a locked box with a cryptic note appears on campus, students and faculty struggle to recall a mysterious stranger who appears to have her own lesson to teach. This fun play is adapted from Mark Twain’s short story, “The Man That Corrupted Hadleyburg.”

Chad Edwards adapted and will produce the play.

The play is about 45 minutes and is appropriate for all ages.

To register, order a copy of Lamott's book for $20 at bookmarksnc.org/event/AnneLamott. The first 150 books will be signed.

The optional theme is "Memories." And the featured writer will be Tha Truth.

Guests can share three to five minutes of their work. The featured writer speaks first.

The Zoom link is: https://tinyurl.com/v1kgoujt.

Creative Greensboro has issued an open call to create a roster of artists for concert planning through June 2022, including the free community concerts Music for a Sunday Evening in the Park (MUSEP) and Opus concerts.

The city provides the venue, stage, a sound technician and an artist fee.

For more information or to sign up, email Meredith.Gornto@greensboro-nc.gov or go to tinyurl.com/ylz1wjmm.

Piedmont Opera will present a livestreamed production of "Cinderella" at 8 p.m. March 19 and 2 p.m. March 21.

Instead of a stepmother, this story has a foolish baron and his two vain daughters, both after the prince. Marie, who is called “Cinderella,” is left behind as they all accept an invitation to the Prince’s Ball. Hearing her sad song, her fairy godmother appears and promises to make Cinderella’s dreams come true.

Pauline Viardot’s "Cinderella" is a re-telling of the well-known fairy tale, composed in an operetta style that combines musical numbers and dialogue. Madame Viardot wrote it to be performed by her voice students in her Parisian salon. Now, it will be livestreamed to you.

“We don’t want to shatter the glass slipper, but we are shattering the glass ceiling, as we proudly announce that this is the first opera composed by a woman that the company has produced,” the opera said in a press release.

High Point Museum is holding its fifth annual Family Game Night with a twist — it will be online.

Attendees will participate in all four “game rooms” with each room lasting about 20 minutes.

Registration is required and space is limited.

To register, go to tinyurl.com/2fzvmcvr.

The 20th annual Triad Jewish Film Festival will feature seven films, shown in a virtual, on-demand format because of the COVID-19 pandemic.

Patrons can view films from Feb. 25 to March 14 from the comfort of their own homes.

This year's virtual festival celebrates the global diversity of Judaism through film. The films are: "Breaking Bread," "Havana Curveball," "Leona," "400 Miles to Freedom," "Nora’s Will," "Shared Legacies: The African-American Jewish Civil Rights Alliance" and "They Ain’t Ready for Me."

Trailers for each film can be found at myTJFF.com.

Stokes County Arts Council will host an exhibit called “Can You See the Rhythm,” featuring Leo Rucker in the Apple Gallery in February.

Rucker’s life as a portrait artist and muralist begin at an early age, with a pencil drawing of his next-door neighbors deceased husband who fought in WWI. Art later became a true passion for him as he worked on portraits and landscapes. Rucker has worked in the art community ever since, including teaching classes, working in with theater sets, creating murals and documenting the history of African Moravians.

The council, 500 N. Main Street, Danbury, is open to the public from 1 to 5 p.m. Monday through Saturday. Admission is free.

The Arts Council of Winston-Salem & Forsyth County will host an exhibition by Winston-Salem artist Carolina Corona in its Arboreal Gallery at The Milton Rhodes Center for the Arts.

“Reflections: A Collection of Works by Carolina Corona” will be open through March 27.

Corona is passionate about nature and environmental justice, and her artwork is a celebration of that fact. Through her paintings, Corona says she aims to share her vision of the world around her and some of her innermost thoughts.

Gallery hours are 9 a.m.-8 p.m. Monday-Friday and 9 a.m.-3 p.m. Saturdays. COVID protocols are in place and masks are required.

The exhibition is free and open to the public.

The Yadkin Arts Council will present an Artist Member (Art-Me) Showcase through Feb. 26 in Welborn Gallery at 226 E. Main St. in Yadkinville.

This exhibit will showcase pieces that reflect the artist members’ experiences and emotions brought on during 2020.

An Artist Member is an artist from Yadkin or the surrounding counties who has an interest in producing, selling, teaching and joining a network of other artists facilitated by the Arts Council staff.

Gallery hours for socially distanced viewing are from 9:30 a.m. to 4:30 p.m. Monday through Friday.

The exhibit will feature original prints and paintings by Alix Hitchcock, Lea Lackey-Zackmann, Katherine Mahler and Mona Wu. It is free and open to the public. Artworks include Hitchcock’s “Fall Shifting” and “Winter Turning”; Lackey-Zackmann’s “Goldfinch Dream” and “Passage Without A Tree”; Mahler’s “Generations” and “Depth Finder” and Wu’s “A Scramble of Leaves” and “Homeward Bound, Swallows.” Artworks Gallery Inc.

February gallery hours will be noon-3 p.m. Friday-Saturday, 1-4 p.m. Sunday or by appointment by emailing shop@artworks-gallery.org.

Rooster will appear in court after killing owner during illegal cockfight

Rooster will appear in court after killing owner during illegal cockfight

ByGood Coffee and The Arts Council of Winston-Salem & Forsyth County are collaborating on an outdoor Art Pop Up from noon to 4 p.m. Feb. 2…

“Blue and Gold Marching Machine,” a short film completed as a class project at Randolph Community College in Asheboro, will be shown at the RiverRun International Film festival in Winston-Salem. Follow along as 200 musicians and dancers celebrate the 100th year of the N.C. A&T marching band, from band camp to the “Greatest Homecoming on Earth.”