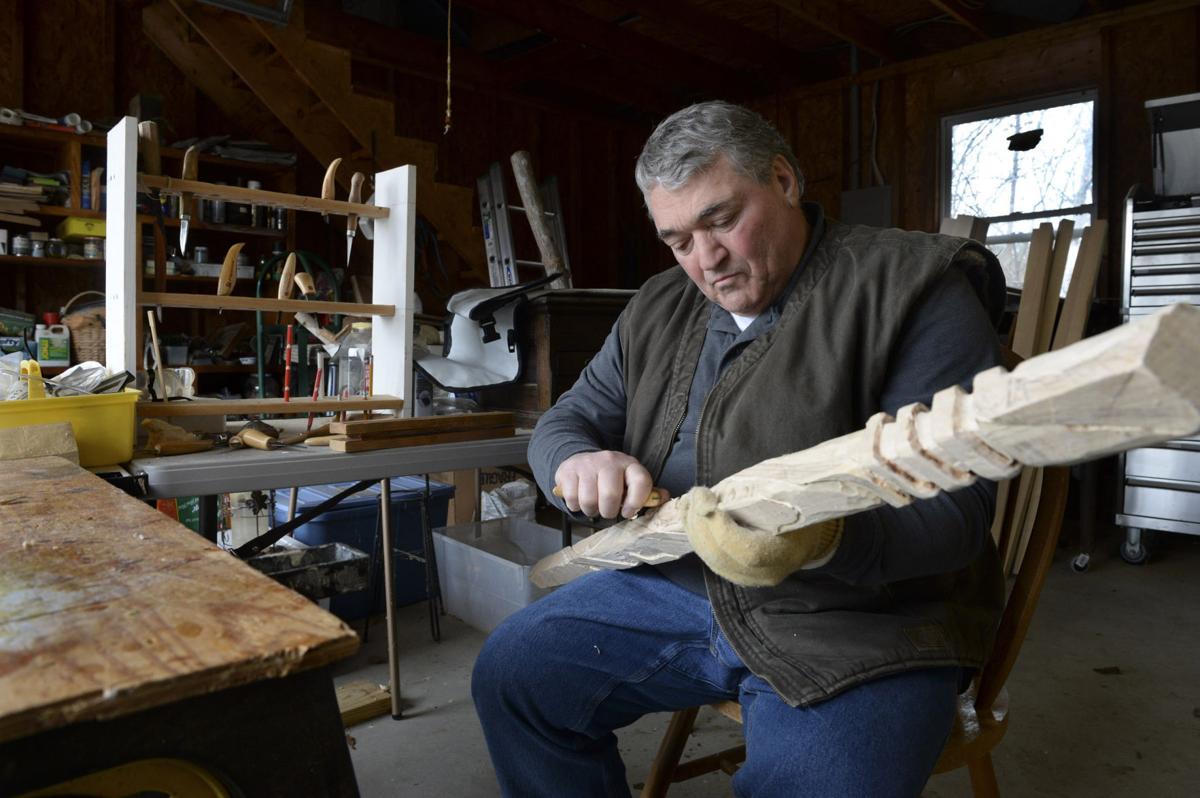 Tony Leonardi, 70, works on a walking cane in the workshop at his home in Rockford. 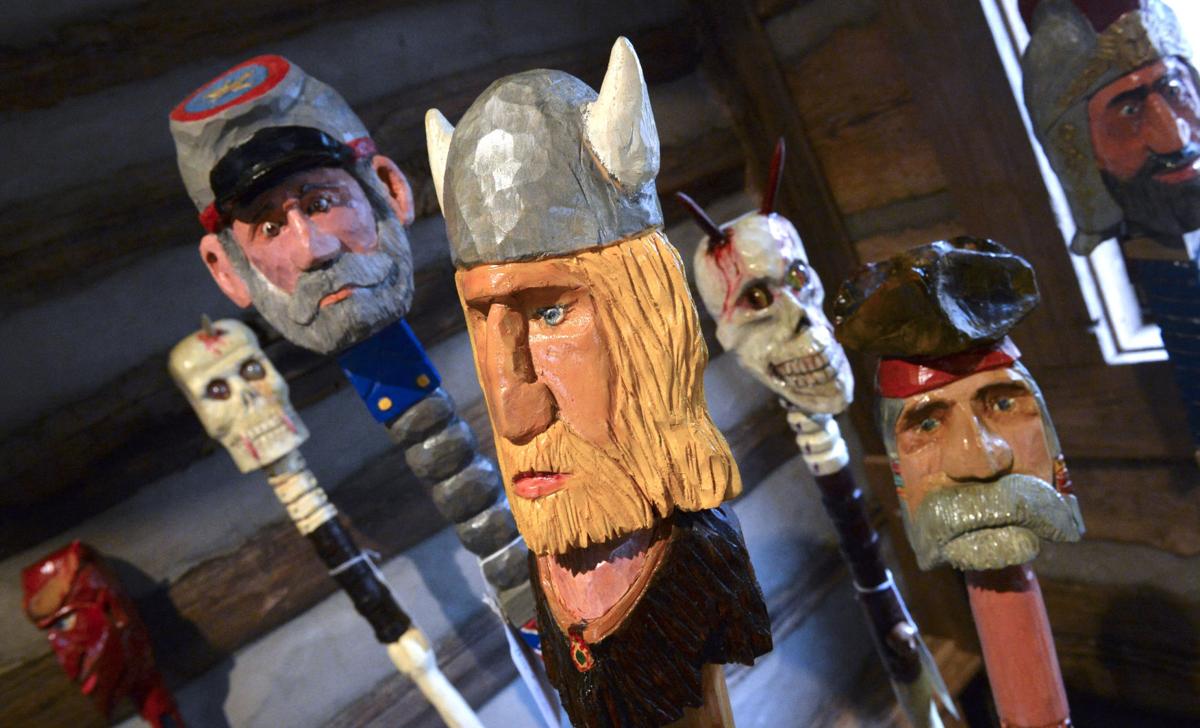 A blue-eyed Viking with a horned helmet is among the whimsical characters carved by Tony Leonardi as one of his canes. 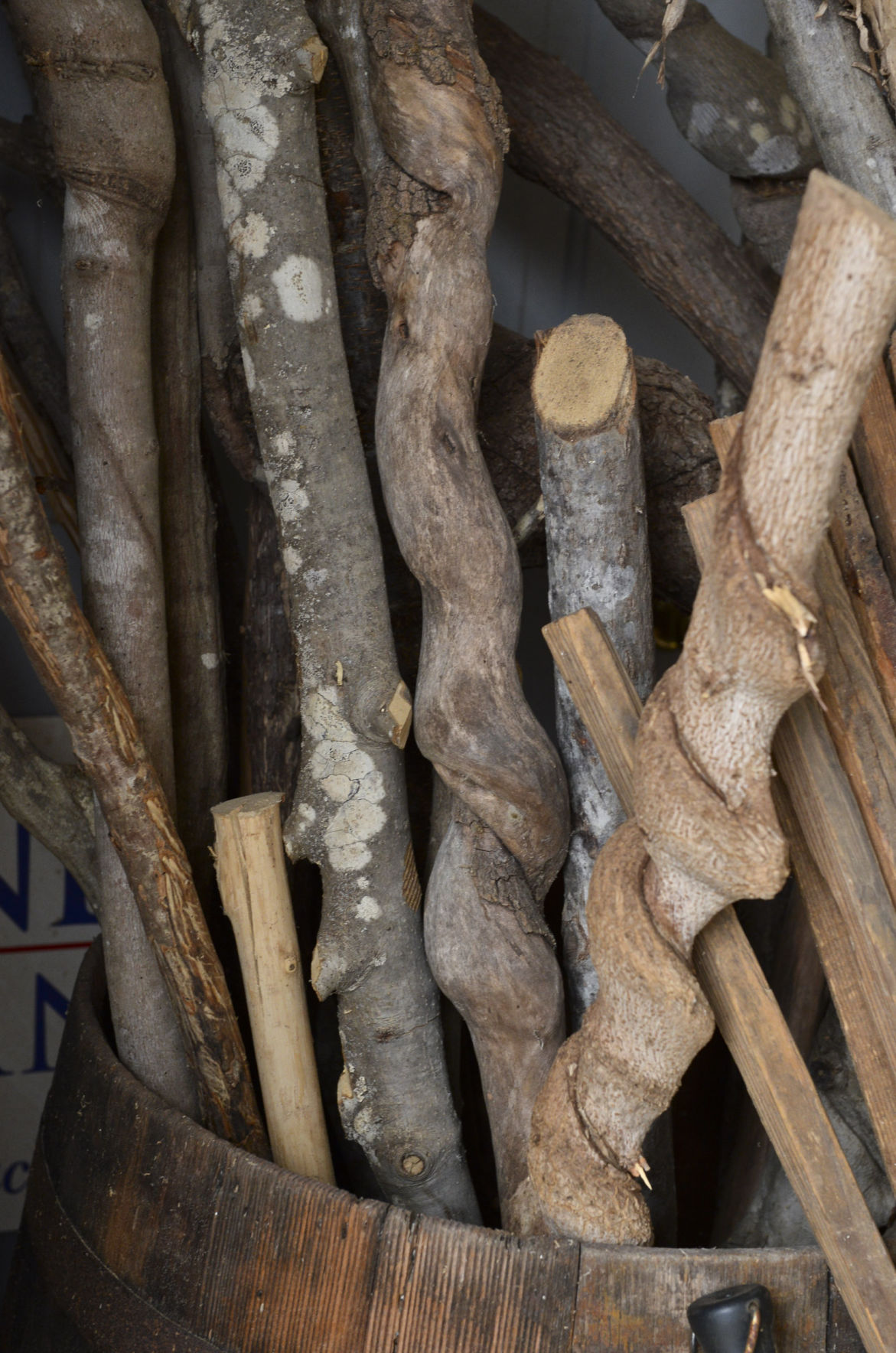 Tony Leonardi cuts saplings on his property in Rockford to carve into whimsical canes. 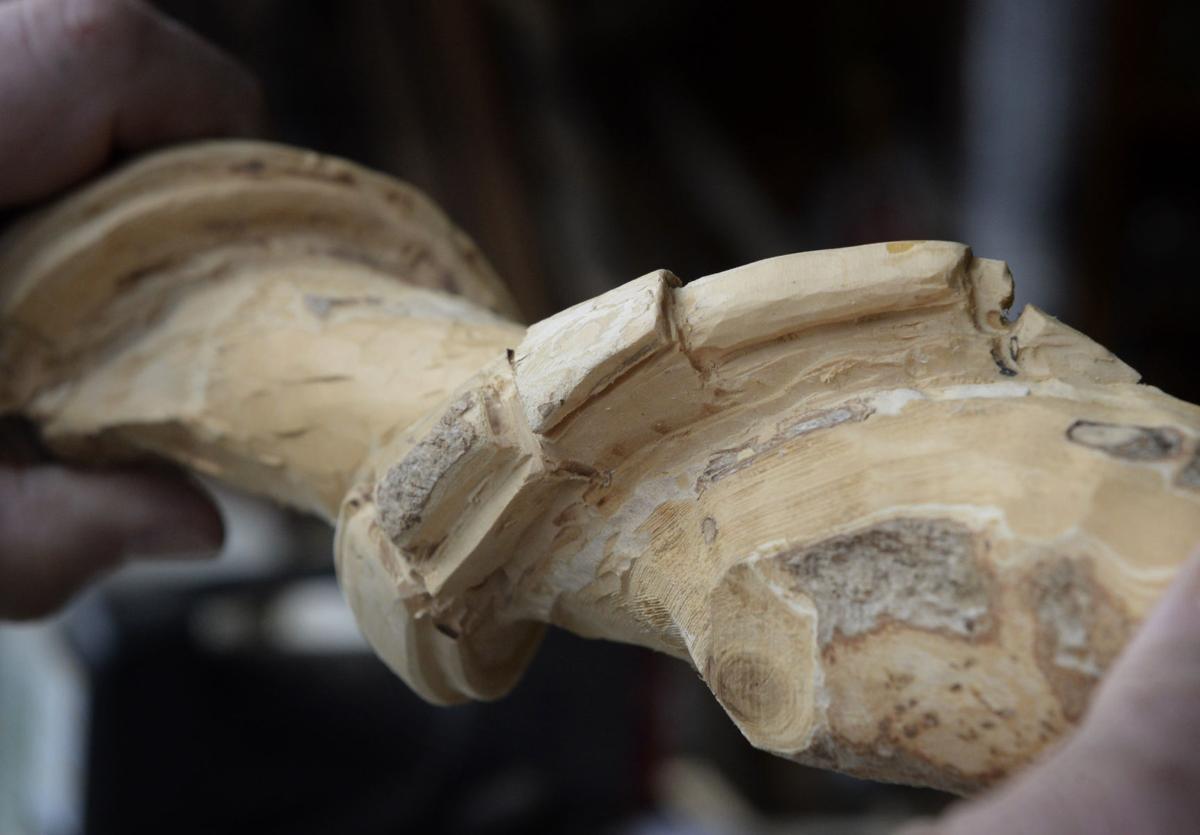 A steam locomotive pulls a train winding up a cane being carved by Tony Leonardi in his home workshop in Rockford. 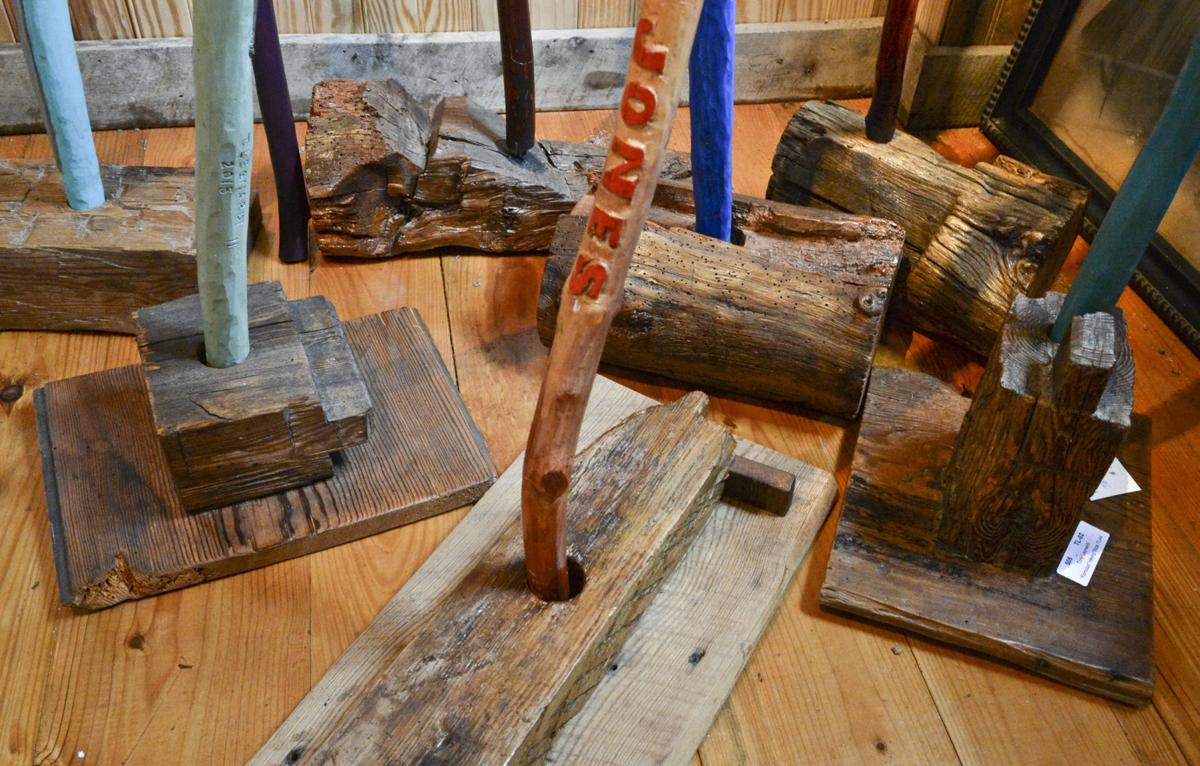 Tony Leonardi uses logs and timber salvaged from the nearby Dobson farm as stands for his canes. 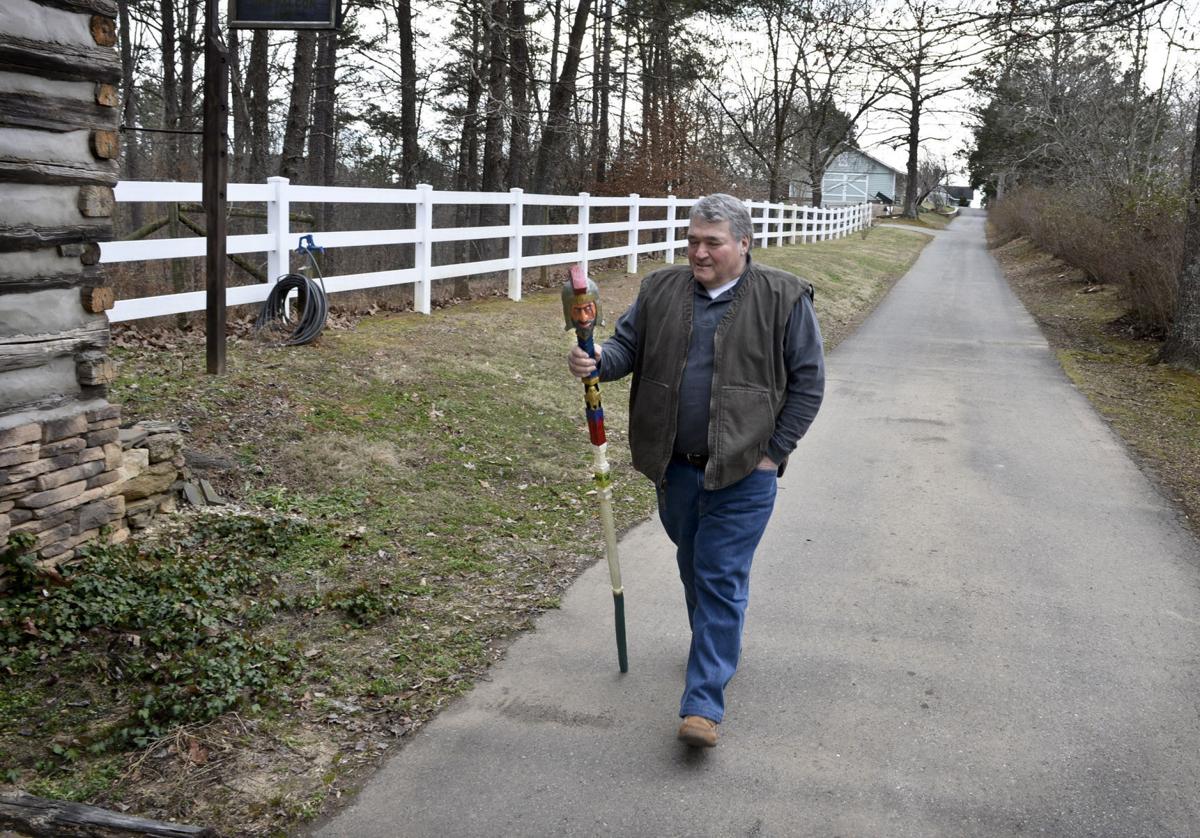 Tony Leonardi walks down the driveway of his home in Rockford with one of his handmade canes — a Roman soldier. 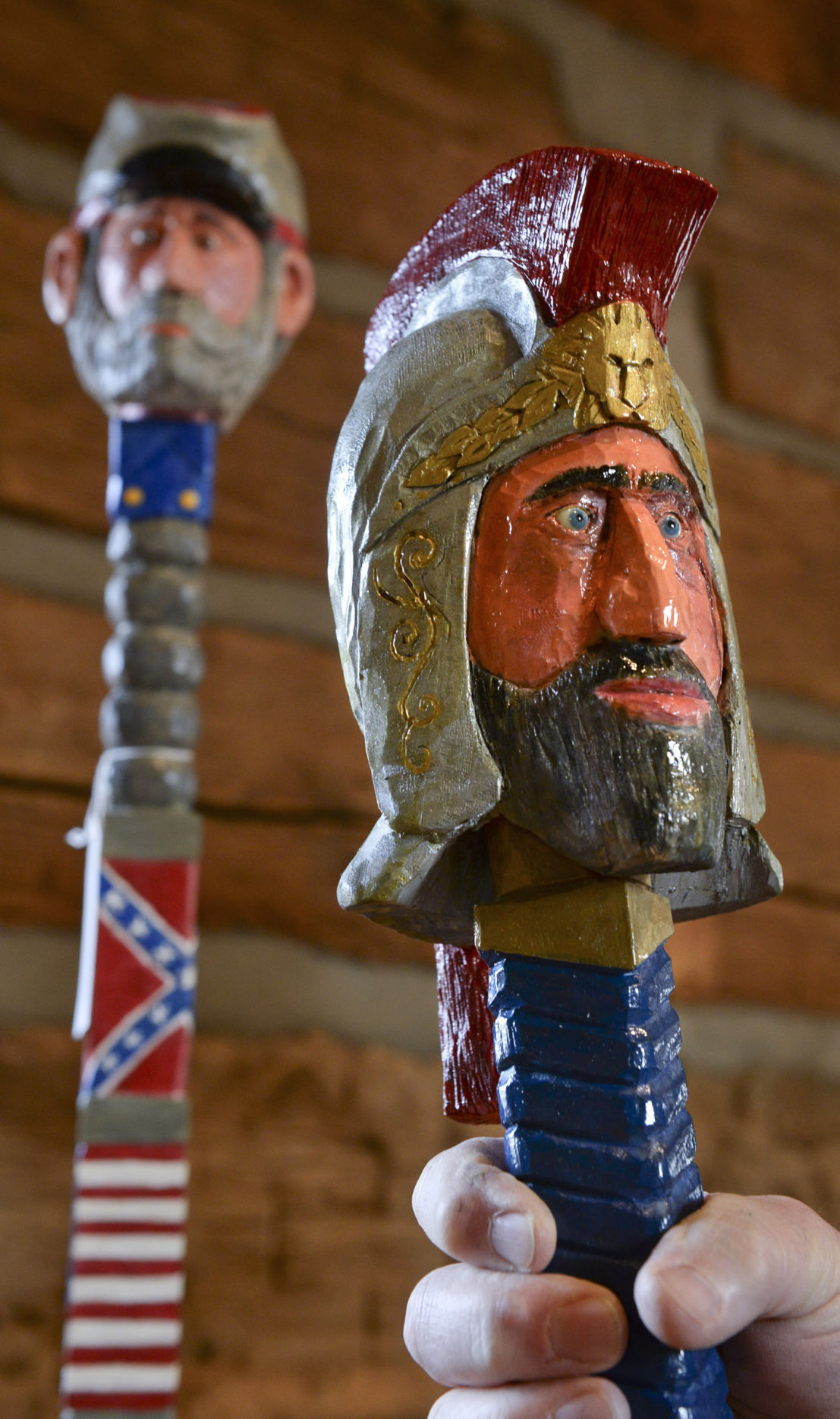 A bearded Roman soldier tops one of Leonardi’s canes. Each cane has a theme or personality, taking months or even years as Leonardi develops his design, then hand-paints them in a small attic studio. 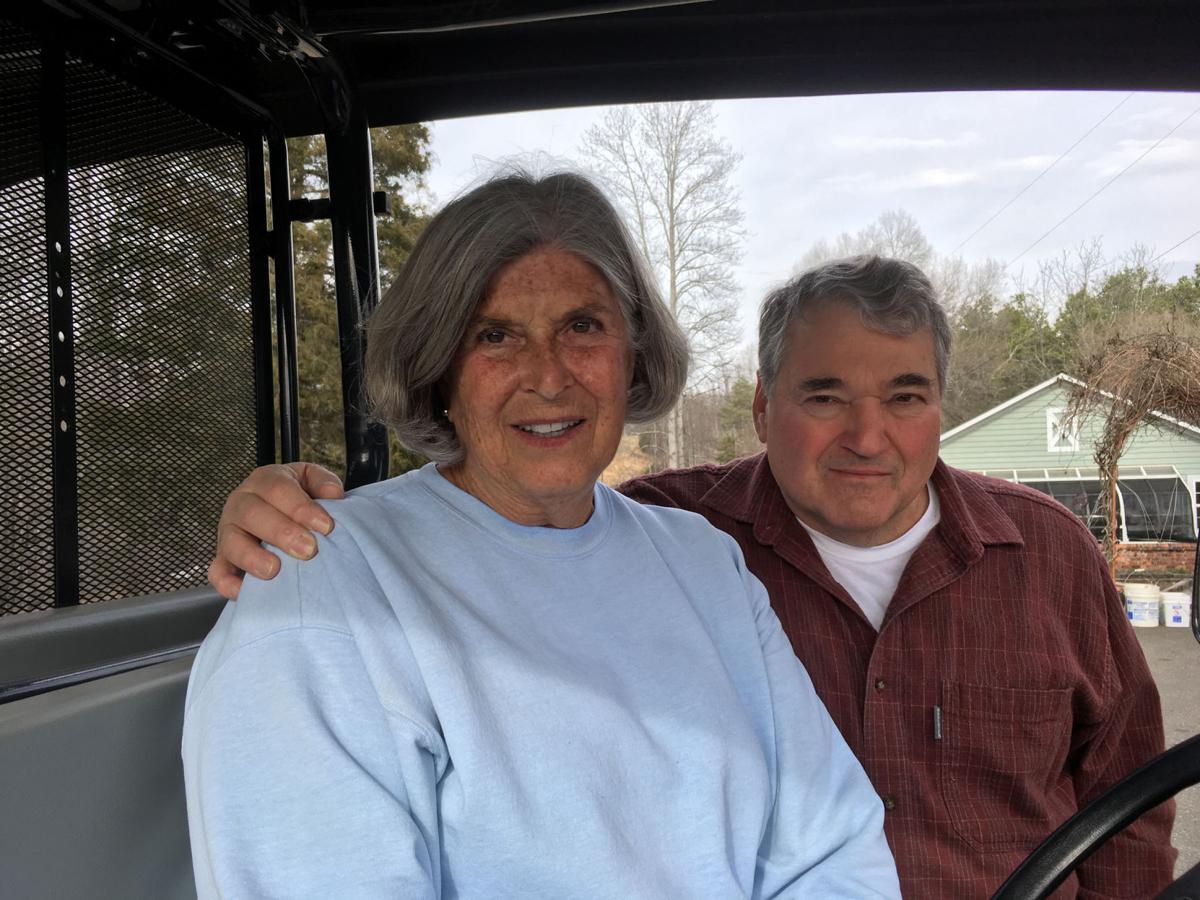 “I carve hiking sticks, and they are meant to be used,” Leonardi, 70, said.

Some collectors have told him they would never use the walking sticks to hike, and that’s understandable.

He spends 50 to 60 hours designing, carving and painting each stick, and he’s made 56 unique designs in three years. Prices for his hiking sticks range from $125 to $400, depending on the design.

He started by carving skulls atop a hiking stick and his more recent designs incorporate a story or theme from top to bottom, like the frog perched atop a lily pad with fish swimming below.

“Before they were elements,” he said. “Now I try to put design and continuity in the elements.”

“I’ve become more sophisticated in the overall theme and design and strive to connect the very bottom of the stick to the top with a story line.”

His hiking sticks come with a stand made from 1790 hand-hewn beams he salvaged from the home of the Dobsons, for whom the town of Dobson was named. When not in use, the sticks can be placed in the stand and enjoyed as art.

Leonardi made his first hiking stick three years ago when a friend and his wife from California were visiting for a week and planned to go hiking. But his friend was unable to bring his hiking stick on the plane. Leonardi told him, “Don’t worry about it; I’ve got plenty of wood on the farm. I’ll make you a hiking stick.”

“I enjoyed it,” he said. “I had a lot of fun carving it and painting it (before he came). I decided to make more just to see what I could do. I wasn’t trying to sell them until I got too many of them.”

His wife, Bertie, provides helpful insights into his designs.

“He got hung up early on doing skulls,” she said.

“Bertie said, ‘You need to change your subject matter,’” Leonardi said. “She was right. There’s a limited spectrum of people who like skulls. The spectrum got broader if you added birds or frogs.”

When Bertie suggests that the public might not understand something he’s trying to create, “That’s when I remind her that I did it for me,” Tony said. “Unfortunately, I have a studio full of sticks ‘I did for me’ ’cause no one else wants them. I guess I need to listen to her more.”

Leonardi said that the Triad Woodcarvers meet the first Monday of every month at Klingspor’s Woodworking Shop in Winston-Salem. They have many talented carvers who have helped him hone his skills.

He finds ideas for his sticks everywhere, he said.

“When the TV show ‘Vikings’ first aired, I carved two Viking hiking sticks. I enjoyed that so much that I did a series of sticks highlighting ancient warriors: knights, Romans, Native American warriors, Civil War soldiers, etc. My wife provides ideas, and I get ideas from discerning nature. Often, the commission work I get dictates the design content. What’s most important is that I have a connection to the theme.”

“I’m doing one now I’m trying to conceptualize a stick for a policeman.”

Leonardi uses basswood that starts as 8-foot long sections of trees harvested in Mocksville that are sawed into 4x4s or 2x2s. He whittles it down to a slender stick with his design. He finds unique vine-wrapped wood on his farm that he has used to experiment with other ideas, like a train hiking stick he has been working on for two years. Patience can be a challenge, and discouragement can kill creativity, he said.

“When a project isn’t going the way you wanted, leave it for awhile,” he said. “I get stuck with a problem, leave it and come back to it when I’m ready. It will always be waiting for you.”

“This one sent me to the hospital,” Leonardi said, pointing to a hiking stick wrapped with a grape vine and topped with a wine bottle labeled Leonardi.

“He likes to say he bleeds for his art,” Bertie said.

During this particular project, his knife slipped and he cut a vein in his leg and had to go by ambulance to the hospital.

Leonardi has a bachelor’s degree from Western Michigan University, where he majored in graphic arts.

“I went to art school, but I looked around me and saw the talent that was in that. I decided I couldn’t compete, so I went into the business end.”

He worked in publishing with children’s books and reference books, Scholastic magazines, and Grolier. He moved to Winston-Salem and worked for the L’eggs division of Hanes when it started Starbooks, a children’s book program with mass- market distribution. He eventually became vice president of advertising of the catalog group for Sara Lee, then later president of Sara Lee home shopping. He was recruited by PetSmart to run its catalog and internet businesses in Rochester, N.Y. He commuted from Winston-Salem to Rochester for five years until after 9/11. Travel became difficult, and he called Bertie and said, “I’m going to retire.”

Throughout his business career, he maintained his connection to art through his work with artists.

“The interest never left me, but I never had the time,” he said. “Retirement gave me that time back.”

The couple spent 18 months renovating their home, and then they started taking oil-painting classes at Surry Community College. They’ve taken classes with local artists, including Sharon Grubbs, Sarah Watts and Patty Bailey Sheets. The pair has traveled to Cape Cod for concentrated landscape and seascape studies.

“With all that, we should be better than we are,” Bertie quipped.

Bertie’s daughter and Tony’s step-daughter, the late Kelly Petersen Womble, was an artist who designed lamps and helped found the Downtown Arts District Association. She died of breast cancer in 2009.

“Art was her passion since she was a little girl,” Tony said.

Womble and Millicent Greason painted and decorated signs of hope and inspiration and placed them throughout the community after 9/11. The pair, known as the Renegade Ninja Cowgirls, would put the signs on public property late at night.

“Nobody knew who did it,” said Bertie, who later found out she had been an unwitting accomplice. “I didn’t know she was doing that. She’d always bring her boys to spend the night here. One of the times she dropped the boys off, I said, ‘Why is it every time you come I have to get out the vacuum cleaner? There are sparkles everywhere.’ She said, ‘Oh, Mom, you know me.’”

Womble and Greason won an ECHO award from the Winston-Salem Foundation for their community-building project.

“She likes to outperform me — it’s a marriage of competition,” Tony joked.

“Back in the Victorian days when people were trying to better themselves a little bit, they started painting on Sunday afternoons,” Bertie said. “Once in a while, you can go into an antique shop and find a painting that is considered to be by a ‘Sunday painter.’ We say we’re ‘Wednesday-morning painters.’”

Tony donates all is hiking stick proceeds to charitable organizations, like Senior Services Meals on Wheels.

“It’s nice when you can do it because you love it and not have to worry about selling it,” Tony said. “I think it’s a creative release. It’s an outlet, a way of expressing an emotion. An idea will surface, and it becomes a challenge to translate the idea into a design. As corny as it sounds, every artist leaves a little of themselves in the art they create.”

He’s given some of his hiking sticks to family members as gifts.

“I tell them, ‘Whatever you do, don’t use it as firewood,’” Leonardi said.

What: Tony Leonardi will have his hiking sticks at the 7th Annual Art Show and Sale benefiting Meals on Wheels

Here are some upcoming holiday events:

Tony Leonardi, 70, works on a walking cane in the workshop at his home in Rockford.

A blue-eyed Viking with a horned helmet is among the whimsical characters carved by Tony Leonardi as one of his canes.

Tony Leonardi cuts saplings on his property in Rockford to carve into whimsical canes.

A steam locomotive pulls a train winding up a cane being carved by Tony Leonardi in his home workshop in Rockford.

Tony Leonardi uses logs and timber salvaged from the nearby Dobson farm as stands for his canes.

Tony Leonardi walks down the driveway of his home in Rockford with one of his handmade canes — a Roman soldier.

A bearded Roman soldier tops one of Leonardi’s canes. Each cane has a theme or personality, taking months or even years as Leonardi develops his design, then hand-paints them in a small attic studio.