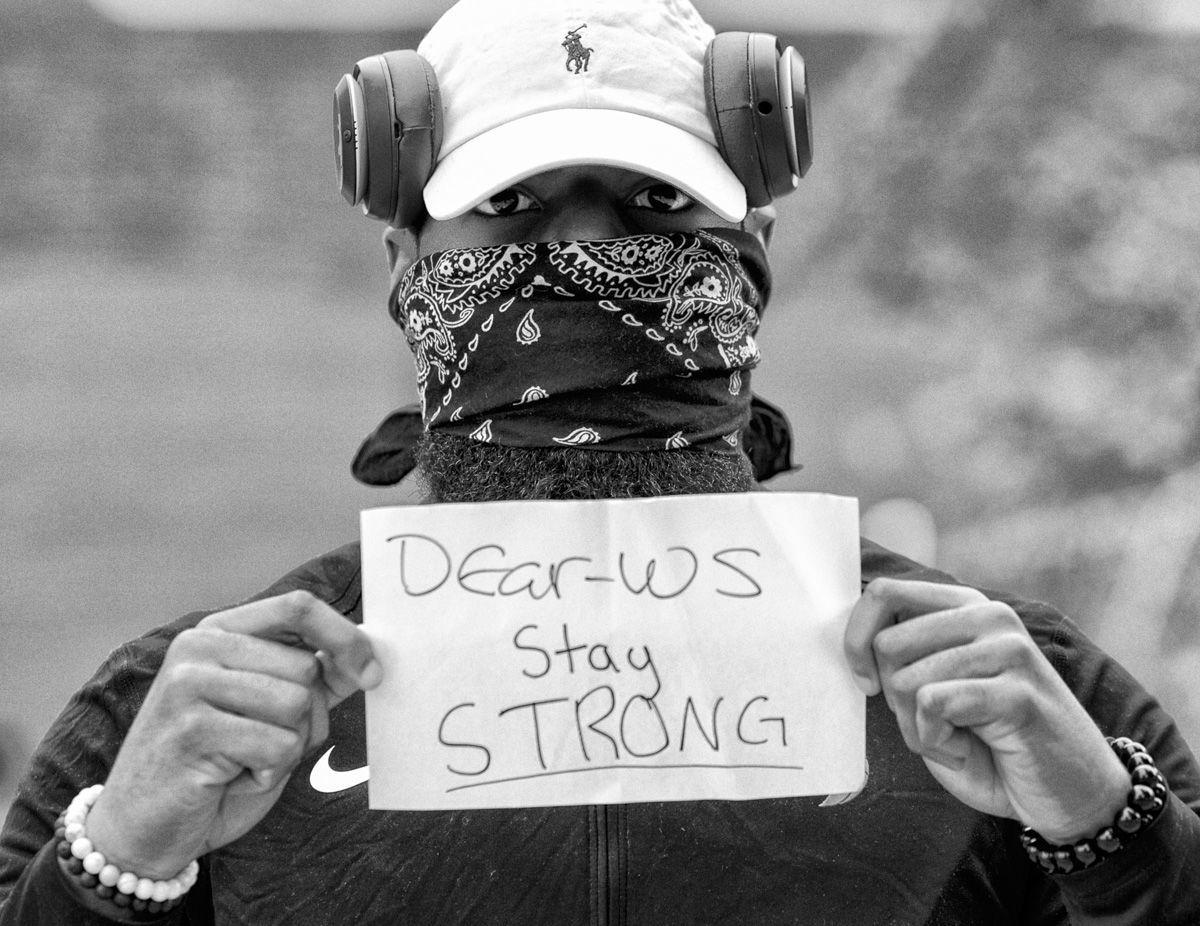 John Allen is from the “Dear Winston Salem Project.” 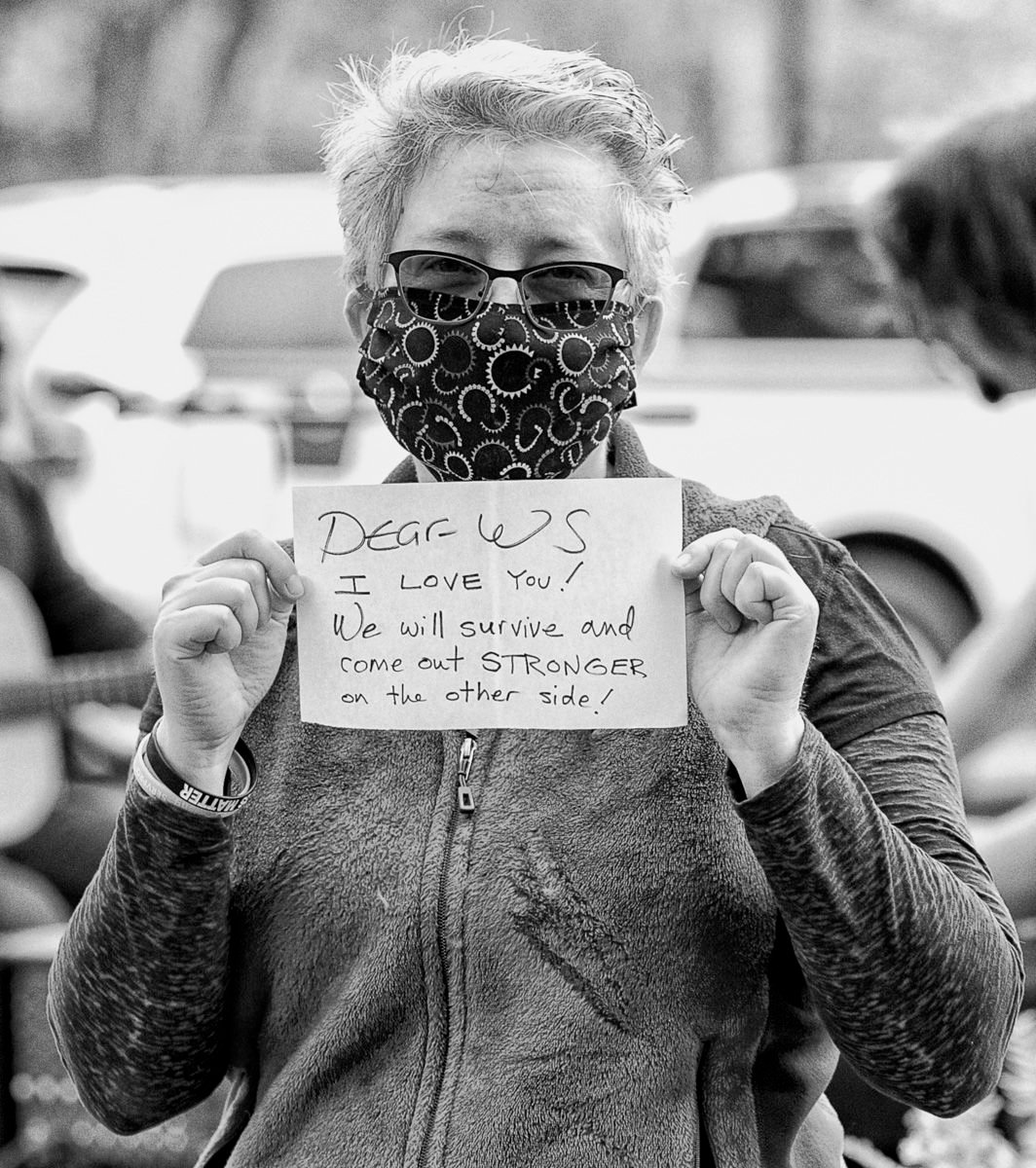 Unknown Woman is in the “Dear Winston-Salem Project.” 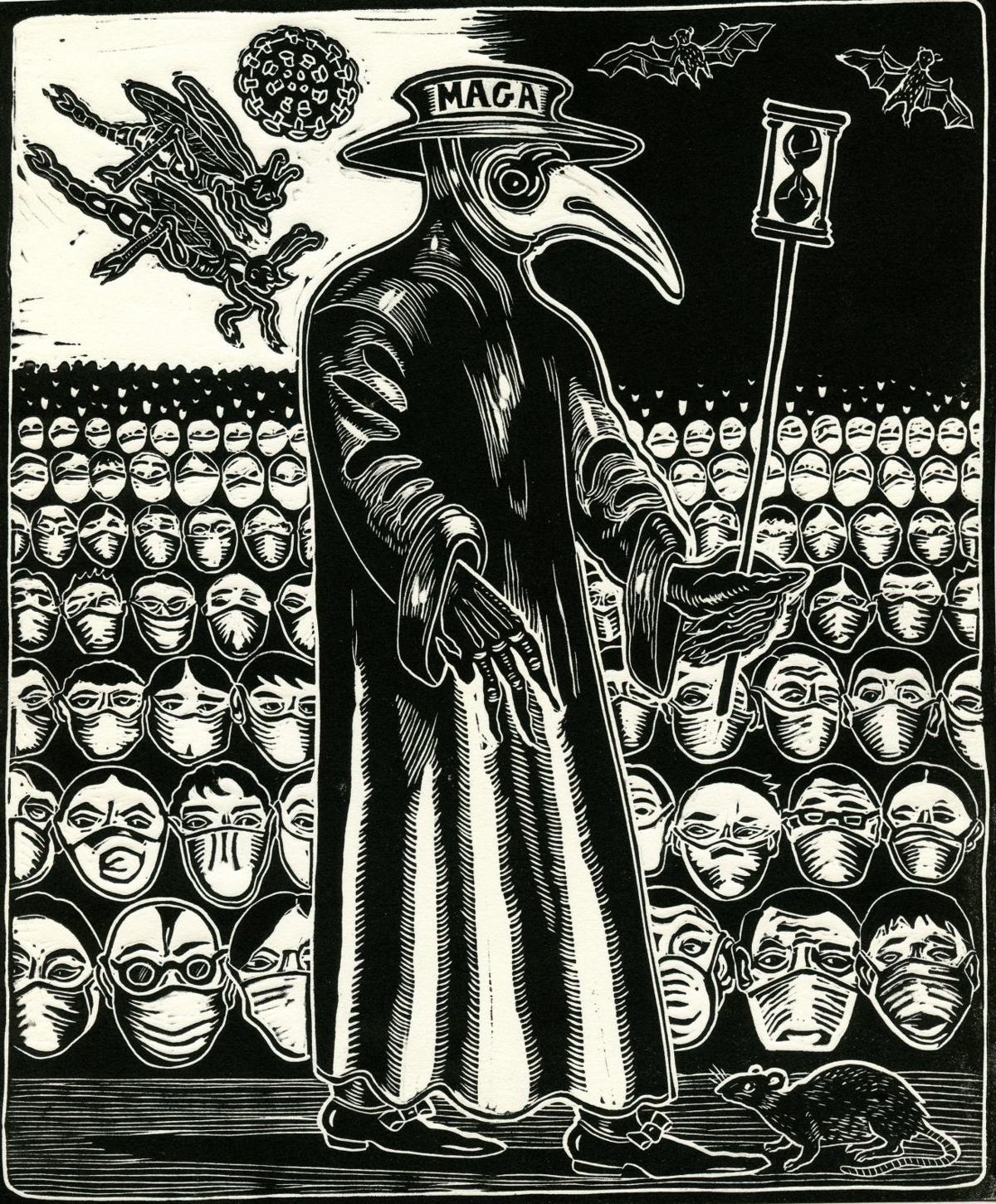 Fed up with staying at home on lockdown, some folks have evidently decided it’s time to get back out and resume what they used to know as their normal lives.

Not so fast, say the experts who have been tracking the spread of COVID-19 and following related developments in the medical field.

While some non-essential businesses are reopening and incautious individuals have opted to ignore distancing and masking recommendations, the rest of us are being far more careful, hoping to avoid infection by the novel coronavirus and help flatten the graphed curve that measures its spread within the population.

Among the businesses that remain closed are art museums and galleries — the venues whose exhibitions I normally review in this column. As long as this is the case, I’ll continue devoting this space to other aspects of visual art, including art that can be seen online.

None of the many artists and other art professionals with whom I regularly maintain contact is using the pandemic as an excuse to take a break. On the contrary, they’re continuing to make art, and some are finding new ways to share it online. More than a few are using their work to focus on the pandemic itself, the recommended policies for coping with it, and the attendant politics.

On the local front, Winston-Salem photographer Owens Daniels has launched a project titled “Dear-WS, One City. One Love,” which documents something of this city’s response to the pandemic.

In the past few years Daniels’ work has been increasingly visible in solo shows and group exhibitions in local galleries and arts centers, including the Southeastern Center for Contemporary Art and the Sawtooth School for Visual Art. Most of the work in these shows has consisted of carefully staged, dramatically lighted images composed in Daniels’ studio with the cooperation of subjects he enlisted as models, often posed with symbolically significant props.

The images in his current project are more informal, photographed outdoors without any special lighting equipment.

In written comments about the project Daniels said that in April, when he saw the city’s empty streets and closed businesses, he wanted to help generate a positive response among local citizens affected by the shutdown. The result is an ongoing series of photographs that portray local citizens wearing masks over their mouths and noses while holding personal, handwritten messages of hope and love, in each case addressed to the city.

As of last week Daniels had photographed more than 100 people for the project. He has posted all of these images on Facebook and Instagram using the hashtags #dear-ws and #onecityonelove. (The expression “One Love” is borrowed from the song of that title by Bob Marley and the Wailers.)

In addition to making the still photographs, Daniels collaborated with documentary filmmaker Chad Nance and musician/composer Doug Davis to create a brief video that juxtaposes several of the images with lines excerpted from a poem by Judie Holcombe-Pack. The video can be viewed online at https://tinyurl.com/onelovewinston .

“The purpose of this project is to bring us all together virtually so that we may know we are not isolated and alone,” Daniels wrote.

Instead of selling photographic prints of the informal portraits he has produced through this project, Daniels is offering prints in exchange for donations to food banks or other non-profit organizations. He has also issued a challenge to other artists to initiate similar projects in their communities.

I’ve long been compelled by the work of British-American artist-activist Sue Coe. I last wrote about her for the Journal in 1998, during her residency and solo exhibition at Greensboro’s Guilford College. In the time-honored tradition of social protest art, her drawings, prints, paintings, and other works have consistently commented on issues such as animal rights and social justice.

In view of Coe’s history, it’s no surprise that she is currently making art about the pandemic. I caught up with her most recent efforts through the non-profit New York gallery that represents her, Galerie St. Etienne.

On May 12 the gallery’s blog posted an email interview that gallery assistant Fay Duftler conducted with Coe, alongside an image of Coe’s new linocut print “Dr. MAGA.” This work updates an illustration of a 14th-century plague doctor from the era of the Black Death, the deadliest pandemic in human history. Functioning mainly to document contamination, these individuals weren’t trained physicians, but they wore creepy-looking costumes that made them instantly recognizable. Their outfits consisted of waxed overcoats and leather masks with beak-like nose extensions full of fragrant herbs and straw, which they believed would protect them from contagion. They also carried long canes to examine and direct the afflicted while avoiding physical contact.

Coe’s variation on the plague doctor wears a hat emblazoned with the acronym “MAGA,” signifying President Trump’s slogan “Make America great again,” and stands before an audience of people wearing modern-day surgical masks. A rat looks up from Dr. MAGA’s feet, while the air above him is filled with bats, giant fleas (the primary carriers of the Black Death), and a vastly enlarged coronavirus molecule.

Coe, who lives in rural upstate New York, has previously made works commenting on other contagious diseases, including AIDS, avian flu, ebola, and swine flu. She has been particularly attentive to zoonotic viruses — transmitted to humans by other animals — of which COVID-19 is an example. In the email interview she wrote that she wasn’t surprised by the onset of the current pandemic.

Asked how she is coping with the isolation that authorities have prescribed to contain the viral spread, Coe wrote, “I hold up by making art about COVID-19 and that other scourge, Trump. Both are transient blights, but the threat of fascism and emerging viruses and pathogens will always be with us.”

The scientists, nurses, doctors, and intellectuals Coe counts as close friends have expressed feelings of doom about COVID-19’s impact on the population, she wrote. By contrast, “I feel braced. I’ve always been the one who predicted we were doomed, that capitalism would become increasingly deadly in its end phase. Now I have to embrace a cheery disposition to counter their depression. I can summon a false humanism, without bursting out laughing; and possibly also summon something of a spiritual nature.

“I have friends who are brave and brilliant and ethical, but they are exhausted and despairing after years of Trump,” she wrote. “We keep each other going. No complaints. Being trapped in a refugee camp on the border is far, far worse.”

The seventh annual Winston Salem Fashion Week is a multicultural community event that provides an showcase opportunity for local designers, artists and professionals in the apparel industry.

John Allen is from the “Dear Winston Salem Project.”

Unknown Woman is in the “Dear Winston-Salem Project.”