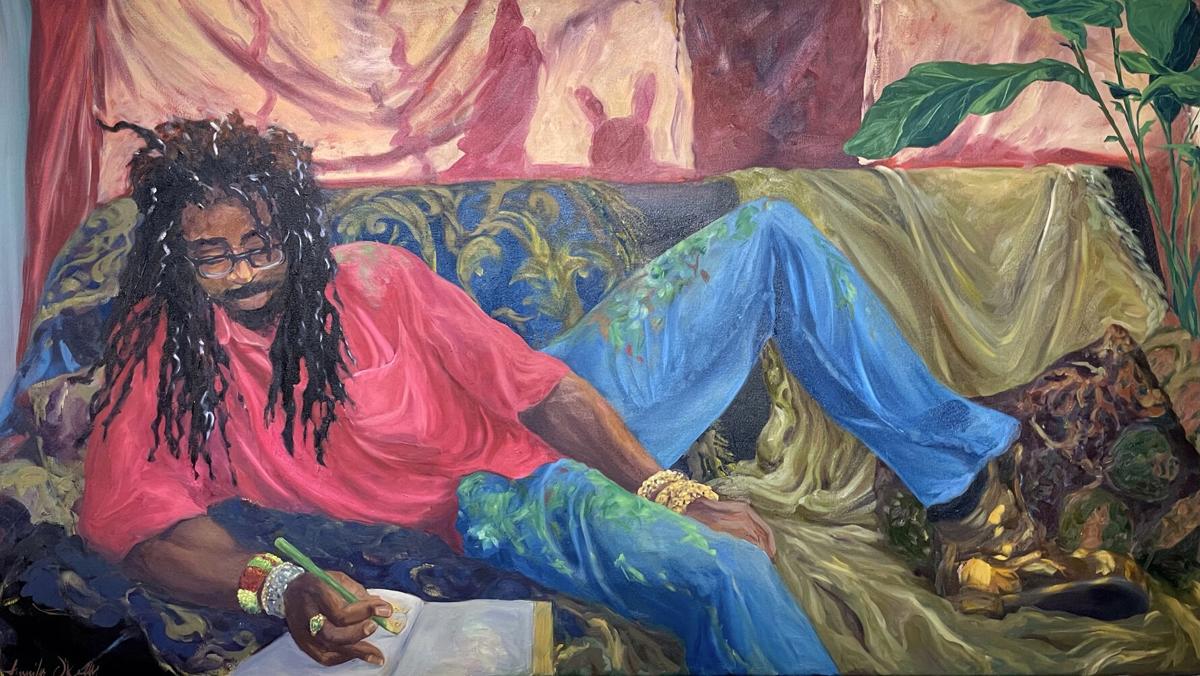 Jennifer O'Kelly's "Modern Odalisque," a portrait of artist Donell Williams, oil on canvas. It's 40-by-70 inches. 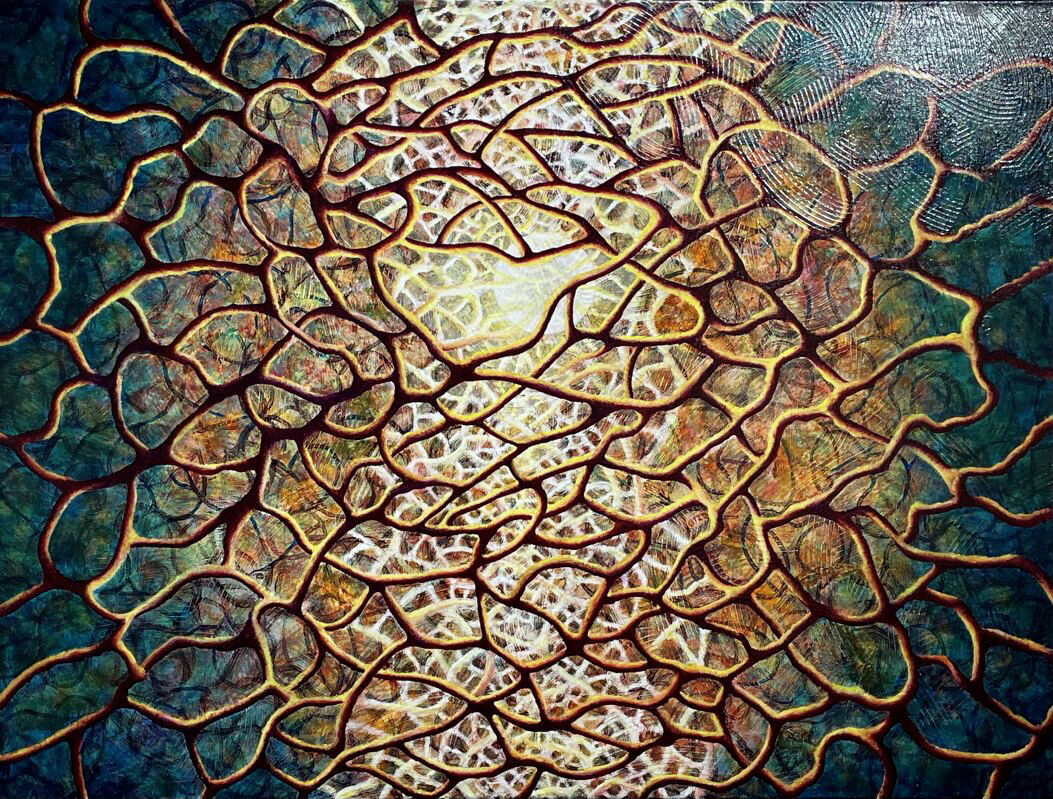 Dennis Millsaps's "Organelle." It's a 36-by-48 inch acrylic on canvas. 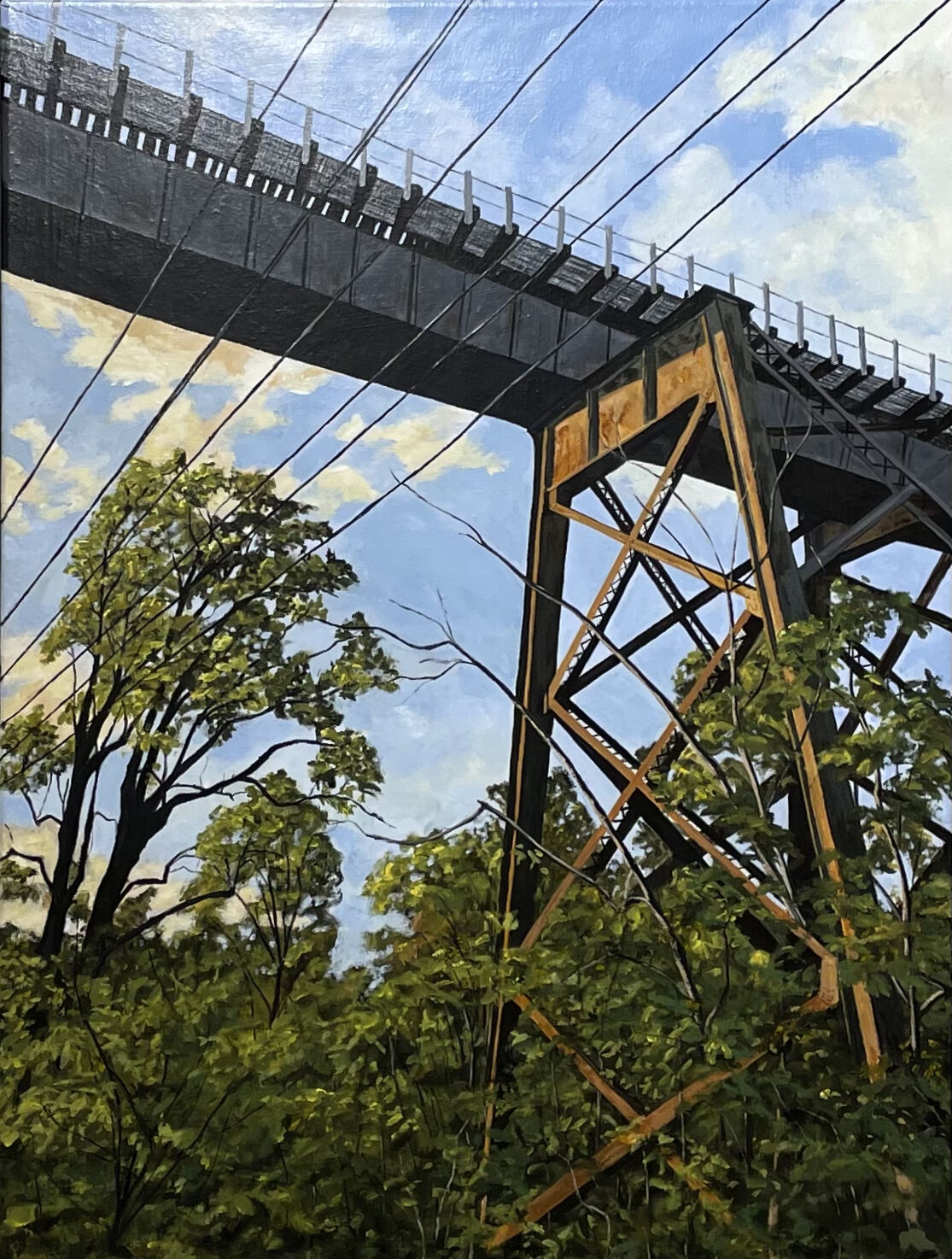 A lively crowd might have been expected in Winston-Salem’s Downtown Arts District on New Year’s Eve, since the occasion coincided with the first Friday of the month. Galleries and shops in the district would have been open for business, and visitors might have been doing some post-Christmas shopping — under normal circumstances.

It was a cold, rain-soaked night, though, and after a banner year for death and disaster, circumstances remain anything but normal. So the Arts District brought in the new month, and the new year, without any hoopla.

Delurk Gallery has become a mainstay of the Arts District. To its credit, the gallery has managed to survive 10 months of trouble — complete closure followed by a more limited, post-shutdown schedule, and a significant reduction in foot traffic. The gallery traditionally hosts opening receptions on each month’s first Friday, but not this time.

Despite the absence of fanfare, Delurk has installed a new exhibition that will remain on view through most of next month, and it’s one of the few new games in town, art-wise. It’s a group show made up of works by some of Delurk collective’s members — usual suspects for the most part.

Anchoring the exhibition in readily observable reality are several naturalistic paintings by Cindy Taplin, including a life-size rendering of a wading egret (“Standing Tall at Salem Lake”) and a landscape featuring an elevated railroad trestle (“Around the Bend”). Her most compelling works are miniatures with meticulously rendered details. Her panorama of seaside cliffs, “Give Me a Home Where Dinosaurs Roam,” measures only 3-by-12 inches, and “Flying Lessons,” which depicts a fledgling hawk on a picket fence, is only 4-by-12 inches.

Jennifer O’Kelly’s paintings and drawings have become familiar to Delurk’s repeat viewers. More curious and distinctive are her small, tile-like, cast-iron reliefs, several of which are on exhibit here. Their organic-abstract imagery suggests chains, hooks, birds and leaf or floral forms, and on the whole, they hint at promises of more to come in this vein.

As for O’Kelly’s exhibited paintings, they’re stylistically in keeping with works she has previously shown, but their subjects set them apart. Instead of depicting landscapes and prop-like objects, they’re portraits. And the clear standout is “Modern Odalisque.” While the French word translates roughly as “harem girl” — a favored subject among pre-20th-century European artists, usually depicted nude and reclining — O’Kelley’s painting portrays a fully clothed African American man with dreadlocks, looking relaxed as he occupies the reclining pose that suggested the title — unless the title preceded the painting.

Self-portraits are among the specialties of Chad Beroth, perhaps the Delurk Collective’s most prolific member, who never seems to run out of ideas or paint. He’s showing two new painted selfies here, including “Speak Softly,” whose title references the universally known quotation from U.S. President Theodore Roosevelt. Beroth presents the implicit “big stick” in the most literal manner, suspending a thick piece of a tree branch below his painted self-portrait.

Beroth’s other self-portrait is more formally complicated and carries a more long-winded, humorously self-deprecating title, “My Conscience Doesn’t Guide Me; It Just Tells Me Jokes and Calls Me Names.” The painting surface is a shallow wooden shelving unit, seemingly designed for displaying knickknacks or other small items, and Beroth has augmented his painted self-image with assemblage components.

Beroth is also represented by two pieces that highlight goddess imagery — if TV celebrity Betty White is your idea of a goddess. Her beaming face appears in a vastly enlarged scale in Beroth’s “Betty,” while a more bona-fide goddess — the monumentally zaftig “Venus of Willendorf” — takes the form of an enlarged painted cutout of that title.

Assemblage is Page Turner’s creative specialty, shown off here in two pieces built around antique doll bodies. Their titles — “Sugar and Spice” and “Petticoat Seamstress” — reference their literal content as well as their thematic focus, namely the historically ambivalent status of women and their bodies in our society.

While Delurk has tended to favor figurative art, this exhibition includes noteworthy abstract paintings by Shannon Boyle and Dennis Millsaps.

Boyle’s paintings employ abstract-expressionist strategies in the interest of boldly colored, lyrical compositions. Millsaps’ two paintings are both abstract, but they reflect very different approaches. His predominantly green-tinged “Ripples” suggests a geometrically stylized interpretation of colored leaves caught in a whirlwind. His other painting is titled “Organelle,” after a sub-cellular structure, and it suggests a microscopic view of fibrous organic tissue, carrying an illusion of three-dimensionality.

While the previously discussed works share the larger, front section of the gallery with additional pieces not mentioned here, the alcove in the rear section has been given over entirely to the work of member artist Jack Hernon. Instead of containing a conventional solo exhibition, the alcove has been temporarily converted for use as Hernon’s studio while he awaits renovation of his apartment on Second Street.

A cascade of unexpected expenses Hernon could ill afford — including costly car repairs and a steep rent increase — prompted Delurk’s other members to launch a GoFundMe campaign for his financial assistance and to allow him use of the rear alcove until he’s able to make new studio arrangements. In the meantime, that part of the gallery is haphazardly crammed with Hernon’s obsessively composed, abstract paintings and mixed-media works in irregularly segmented combinations of black with candy colors, and in varied states of completion.

Depending on the timing, viewers might even find Hernon back there working when they visit the gallery.

What: “Behind Closed Doors” by Delurk Collective member artists

Jennifer O'Kelly's "Modern Odalisque," a portrait of artist Donell Williams, oil on canvas. It's 40-by-70 inches.

Dennis Millsaps's "Organelle." It's a 36-by-48 inch acrylic on canvas.