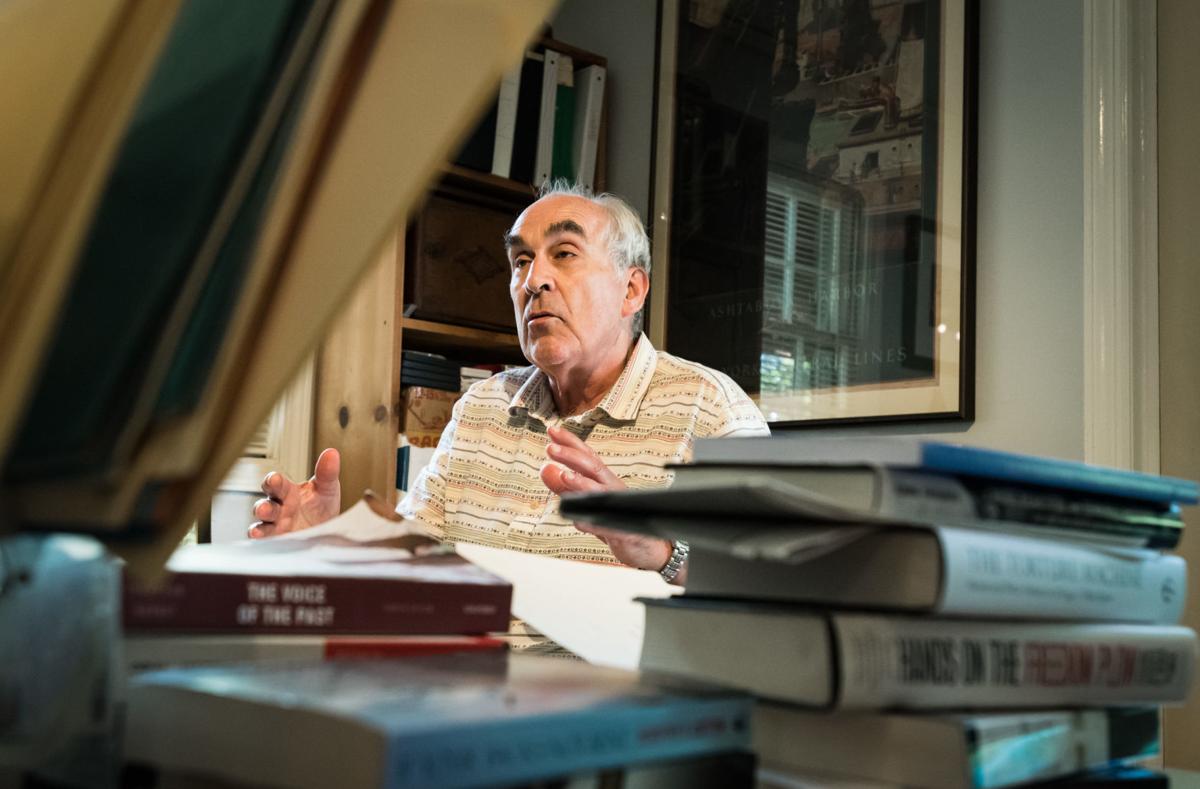 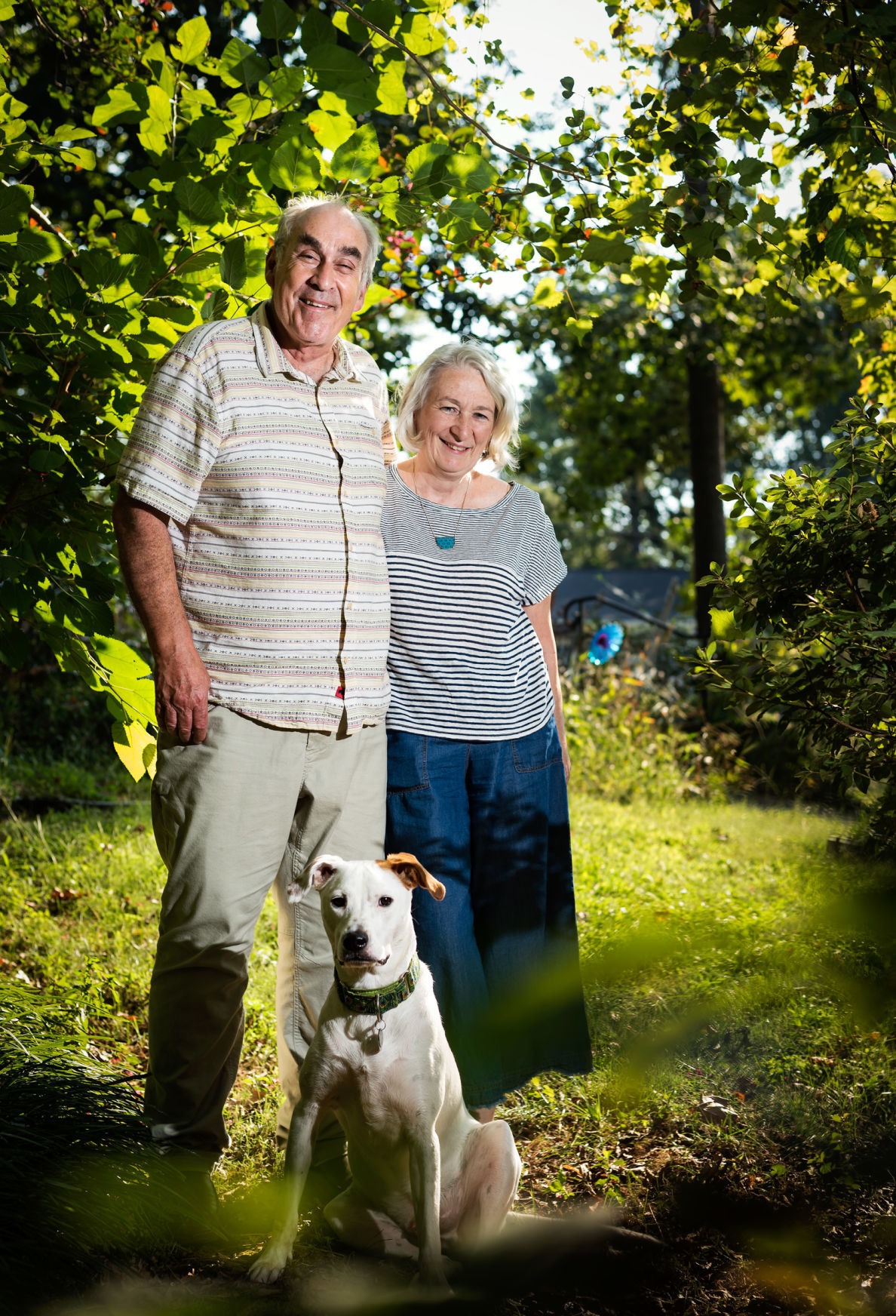 Matt and Cornelia Barr stand for a portrait with their dog, Rhubarb, in their yard in Winston-Salem. Matt produced and directed “Union Time: Fighting For Workers’ Rights.” Cornelia was a co-producer and co-wrote the script for the documentary. 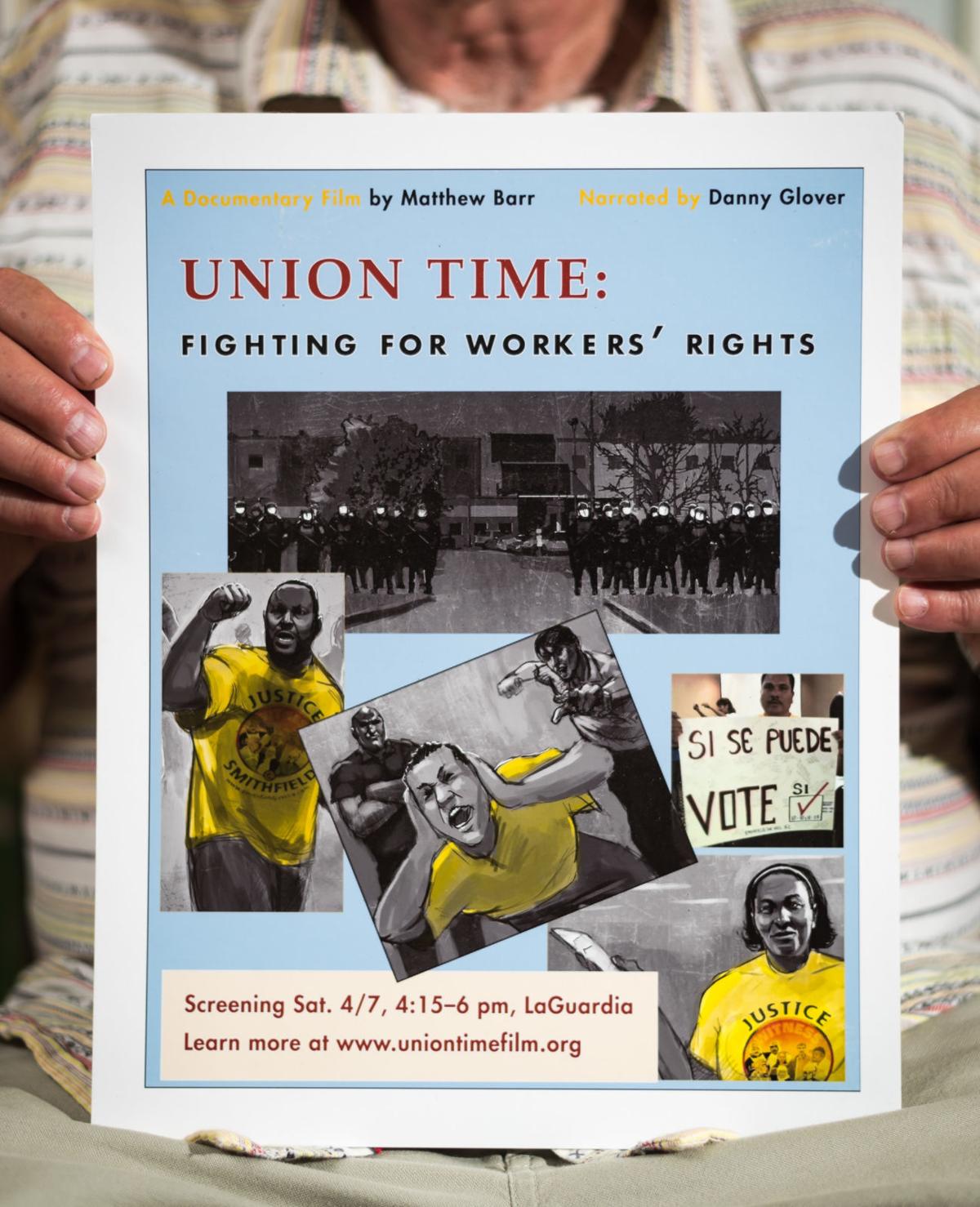 Barr holds a screening poster for the documentary film he produced and directed, “Union Time: Fighting For Workers’ Rights.”

Black, white, Latino and Lumbee Indian workers; labor unions and civil rights organizations all stood together to bring a labor union to Smithfield Packing Co. in Tar Heel in 2009.

In 1992, the company brought 5,000 jobs to an impoverished part of N.C. but took advantage of the area’s desperation by providing low pay and dangerous working conditions, according to the documentary “Union Time: Fighting for Workers’ Rights.”

Matthew Barr, a local filmmaker, and Cornelia Barr, Matt’s wife, co-writer and producer on the film, documented the workers’ struggles for nine years. Margaret Norfleet Neff was also a producer.

The film — edited to 70 minutes from 170 hours of footage — will be screened at 3 p.m. Sept. 29 at the the Central Library Auditorium, 660 W. Fifth St., Winston-Salem. The screening is co-sponsored by the Forsyth Public Library and the Unheard Voices Project. A Q&A with the filmmakers will follow.

“They were processing 32,000 hogs in one day and running two lines simultaneously at unbelievable speeds,” Barr said. “It was the world’s largest slaughterhouse.

“The line never stopped. The workers were poorly trained and mistreated. There was favoritism, sexual harassment; a large number of immigrants who were most vulnerable and targeted by management for ICE raids.

In the 1970s, the meat-packing industry started moving south to take advantage of cheap labor. Animal abuse, environmental degradation and unfair labor practices came with them, according to the film.

In 1993, when union organizers heard about what was happening at Smithfield, they set up a trailer outside the plant and began trying to educate the workers who knew very little about collective bargaining.

Because turnover at the plant was 100%, Barr said, the union organizers had to start anew every year. Plant managers put up obstacle after obstacle to the union, including hiring a 28-person police force that arrested more than 100 workers for minor infractions.

“The intimidation was mind-boggling,” Barr said.

In 1968-69, Barr was a student at San Francisco State College (now University) where an upperclassman named Danny Glover was among the leaders in the fight to establish a Black Studies program at the school.

“It became the first such department in the country,” Barr said. “Right before Harvard.”

Glover, now a famous actor and film director, agreed to narrate “Union Time” for free. At 73, he still participates in civil and workers rights activities.

Chris Heckman, a composer who teaches at UNC School of the Arts, created the musical score for the film.

“I told Chris that I wanted fighting spirit music, and he knew exactly what I meant,” Barr said.

“We talked early on about what that would sound like,” Heckman said. “What we came up with first were songs that were kind of hymn-like. I decided to come up with a new tune — a kind of coming together — that would try to capture the voice of the people.

“It is a little heroic, a little burdened — as though it was a long journey, a long fight — it’s a bright enough and heavy enough to encompass all those ideas. It’s a theme for all of the characters collectively — for their struggle and their fight and their ultimate victory. That’s the tone that we were going for.”

They rejected the idea of a dark theme for the plant, deciding to focus instead on neutrality and hopefulness.

“It’s a little more melodic than the average documentary,” Heckman said. “It’s a credit to Matt’s editing that he gave space to develop that melody — particularly at the beginning and the end.

“The cello is kind of a lead instrument in that. In the theme there is hope, and there is a lot of hope in the film, and I hope that’s reflected in the score.”

Alex Rodriguez, a concept designer from Greensboro, was still a student when Barr asked him to illustrate some of the action for “Union Time.” Barr did not film inside the plant, but he needed a way to show what was happening there.

“He gave me a lot of free range illustrating the people and telling their stories,” Rodriguez said. “He he had a lot of testimonial, but he needed to show action.”

“There was a worker who went inside a tanker truck and died, so we had to do research and try to portray it as accurately as possible,” Rodriguez said.

“It was a good opportunity because I had never heard that story (of Smithfield). To be a part of exposing that sort of world.

“I’m black and Puerto Rican. Having the agency to tell the story of people who look like me; it was a good feeling.”

Civil rights organizations, such as Beloved Community, Jobs for Justice and the NAACP joined the Smithfield workers’ cause and took their fight nationwide.

“Civil rights and labor have always had a connection,” says William Barber II in the film. Barber is a Protestant minister and political activist.

“By bringing the NAACP into it, it was going to bring more attention to it and connect what should be connected — civil rights and labor rights.”

Groups demonstrated in front of Harris Teeters, at the Smithfield shareholders’ annual meeting in Virginia and in front of Paula Deen’s restaurant in Savannah. Deen was a national spokeswoman for the company.

“Smithfield countered their efforts with increased intimidation of union supporters, interference with two union elections, violence against workers, and lawsuits,” Cornelia Barr wrote in a statement.

But after winning the third union election in 2008, the United Food and Commercial Workers’ Union (UFCW) established Local 1208 in Tar Heel. The union has successfully negotiated higher pay rates and safer working conditions.

In the film, workers cite being treated with respect as their most important victory. They say they are now proud to say they work at Smithfield. With less turnover and more employee loyalty, it’s a win for the plant as well.

The latest version of “Union Time” was awarded Best Documentary Feature at the Workers Unite Film Festival in New York. A previous 86-minute version had festival screenings at the National Black Theatre Festival in Winston-Salem; DC Labor Fest; Reel Work Film Festival, Santa Cruz and Monterey, Calif.; San Francisco Laborfest; and the Japanese Labor Film Festival, Tokyo. It has been used by union locals as an example of organizing strategy.

“When those 5,000 workers start to speak they’ve got to be heard. ... It’s a roar,” says one of the workers in the film after they have successfully organized.

“Solidarity can turn around unsafe labor practices,” Glover says in the narration.

Matt and Cornelia Barr have made five other films through their nonprofit Hidden Voices Project, including “Wild Caught” about N.C.’s shrimping industry and “With These Hands” about the closing of the Hooker Furniture Co. in Martinsville, Va.

More: A Q&A with the filmmaker Matthew Barr will follow.

Songs to get you ready for Thanksgiving

Matt and Cornelia Barr stand for a portrait with their dog, Rhubarb, in their yard in Winston-Salem. Matt produced and directed “Union Time: Fighting For Workers’ Rights.” Cornelia was a co-producer and co-wrote the script for the documentary.

Barr holds a screening poster for the documentary film he produced and directed, “Union Time: Fighting For Workers’ Rights.”