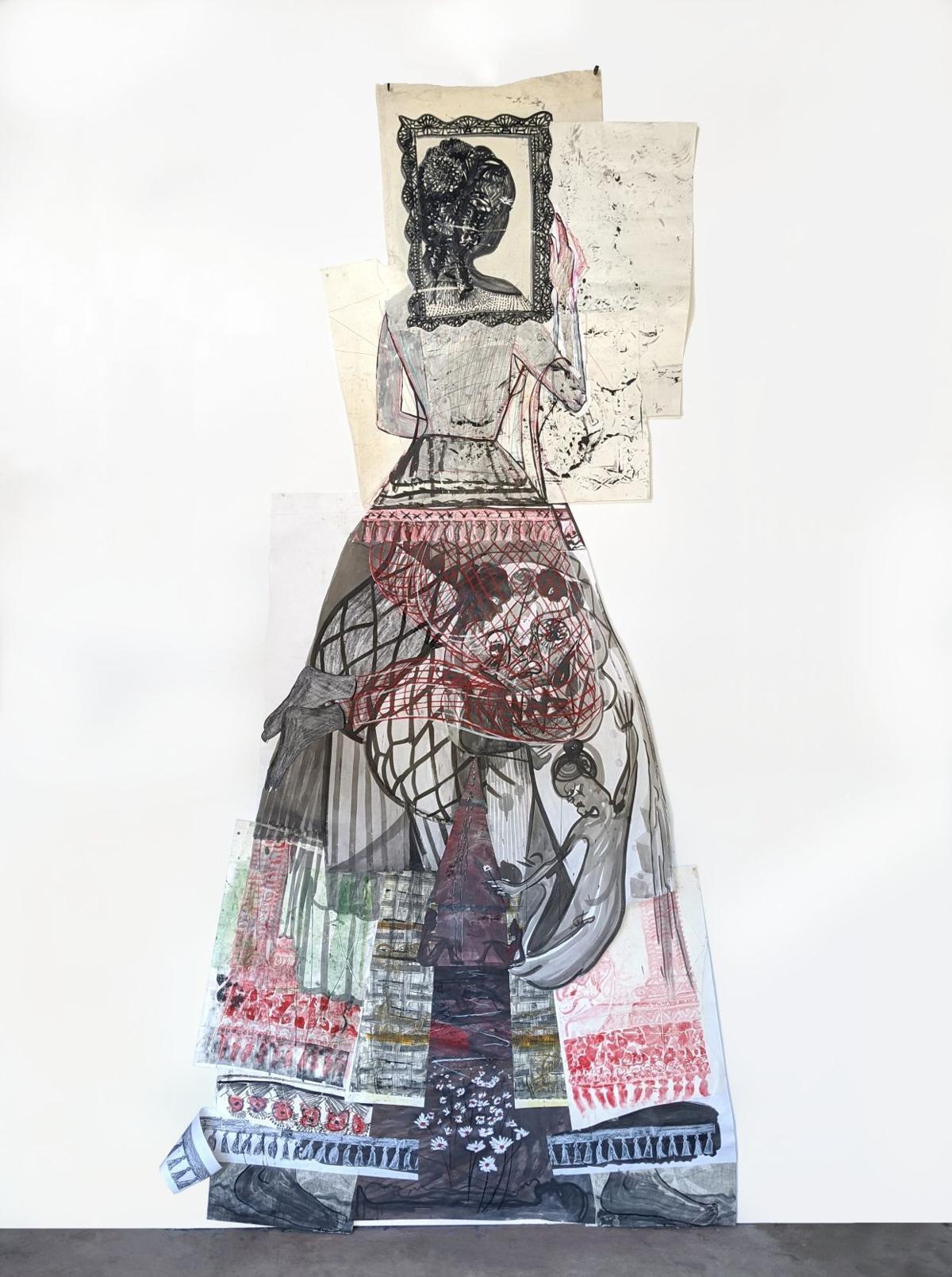 “Thy Self” ink, charcoal, pastel, monotype, crayon, on various papers and fabric with painted wood fasteners. 187-by-99 inches, 2020 by Paula Wilson will be in the show, “DRAWN,” at SECCA. 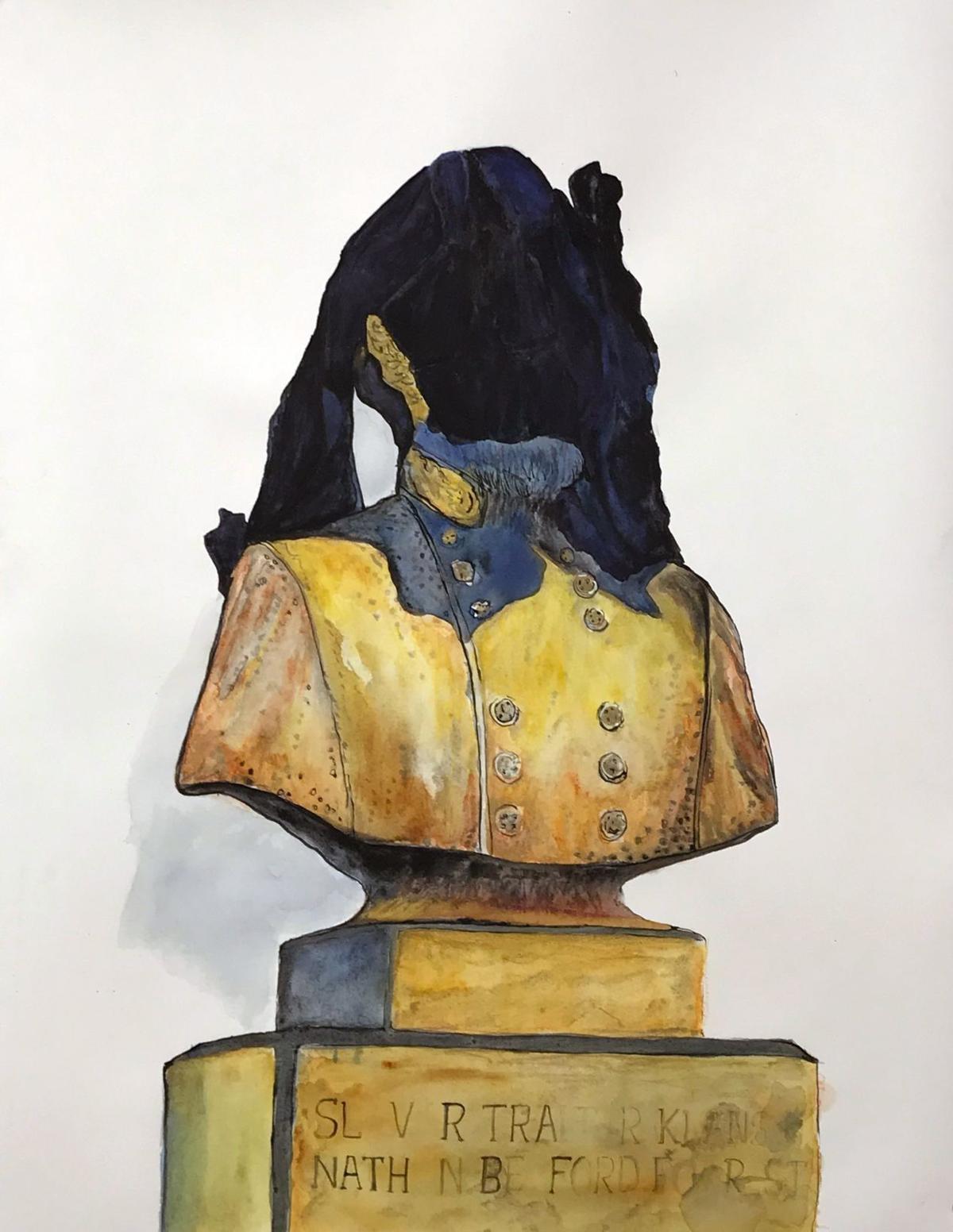 Kambui Olujimi’s “Slaver, Traitor, Klansman,” 2019, is a painting from the “When Monuments Fall” series in SECCA’s “DRAWN” exhibition. 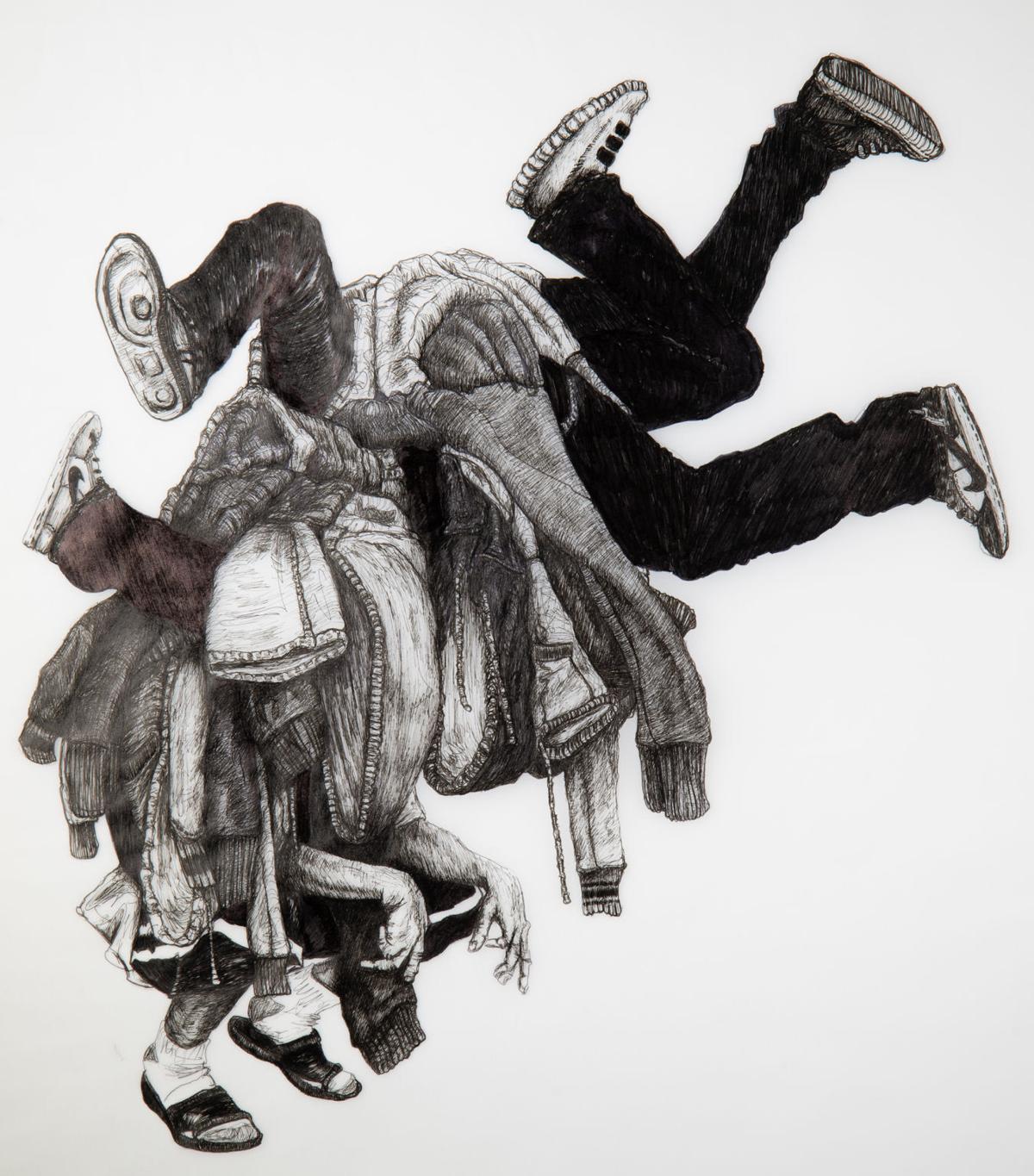 Study for Antoine Williams’ “A Moment of Rest While Convincing Monsters that I Am Human,” wall mural wheat-paper paste installation, approximately 18 -by-18 feet, 2020, in SECCA’s “DRAWN” exhibition. 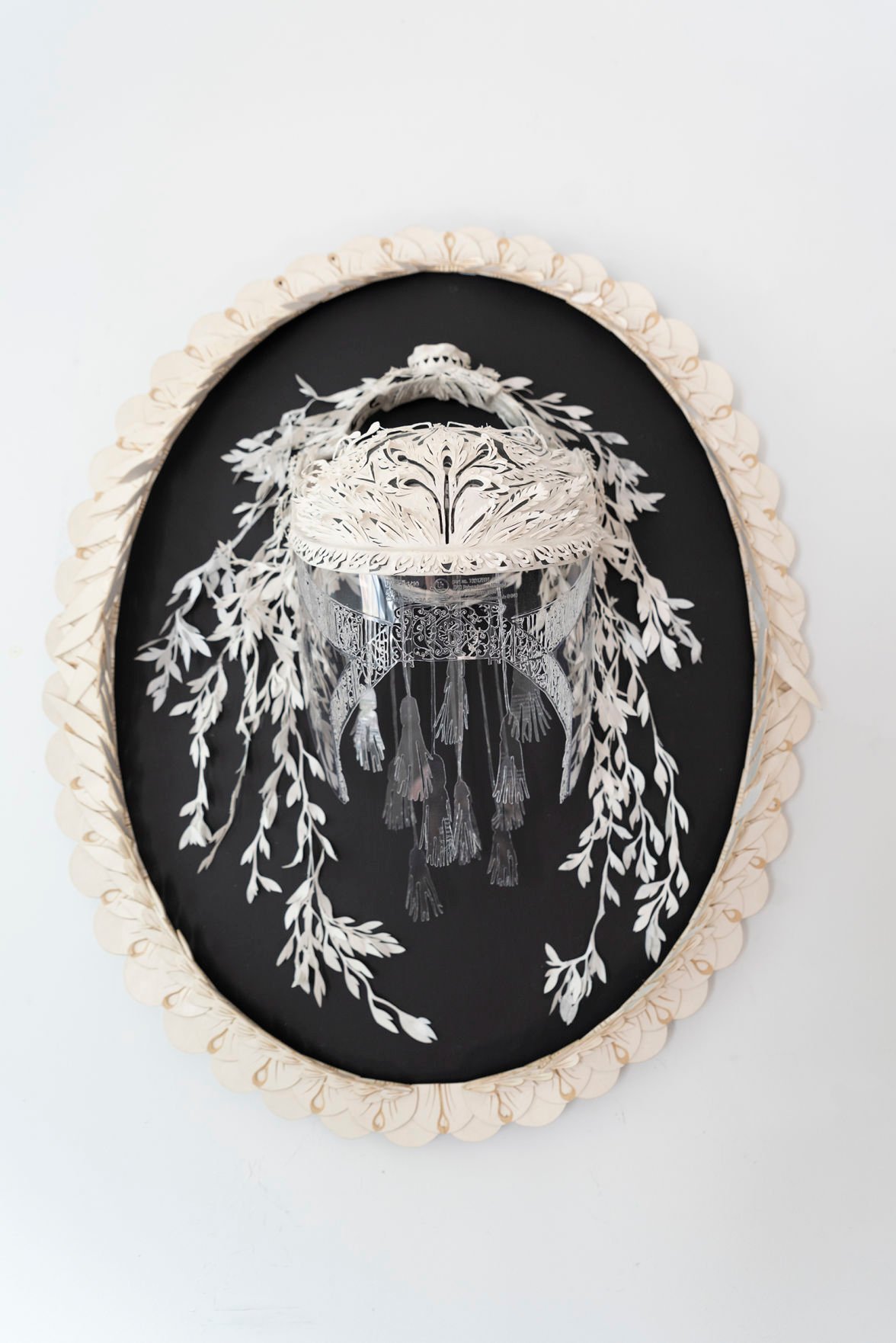 “Thy Self” ink, charcoal, pastel, monotype, crayon, on various papers and fabric with painted wood fasteners. 187-by-99 inches, 2020 by Paula Wilson will be in the show, “DRAWN,” at SECCA.

Kambui Olujimi’s “Slaver, Traitor, Klansman,” 2019, is a painting from the “When Monuments Fall” series in SECCA’s “DRAWN” exhibition.

Study for Antoine Williams’ “A Moment of Rest While Convincing Monsters that I Am Human,” wall mural wheat-paper paste installation, approximately 18 -by-18 feet, 2020, in SECCA’s “DRAWN” exhibition.

It’s been four months since my last visit to the Southeastern Center for Contemporary Art — a lag unprecedented in the 36 years I’ve lived in Winston-Salem.

The reason, of course, is the COVID-19 pandemic, which has kept SECCA closed since March 16. A two-gallery exhibition of works by recipients of the North Carolina Arts Council’s artist fellowships for 2018-2019 had opened only a few weeks earlier. It was originally set to remain on view into early June, but it had to come down weeks ahead of schedule.

I was pleasantly surprised, then, to see the recent announcement of an ambitious group exhibition, “DRAWN: Concept & Craft,” set to open at SECCA on Aug. 15. That date was chosen because it follows one week after Gov. Roy Cooper’s next scheduled announcement about the phased reopening of North Carolina businesses.

If the governor’s medical team recommends a move into phase three, SECCA can physically reopen with masking and distancing measures in place, and “DRAWN” can open on schedule in SECCA’s galleries.

Otherwise, it’s on with the backup plan. “DRAWN” will remain in place for an extended run, through February 15, in the hope that viewers will eventually be able to see it firsthand, even if next month’s opening has to be postponed.

At this pivotal moment, SECCA’s executive director William Carpenter reflected on the arts center’s response to the pandemic and talked about how the staff has weathered the public down-time.

Meanwhile, exhibitions curator Wendy Earle discussed the origins and development of “DRAWN” and talked about related accommodations for safety during the pandemic.

Carpenter said that the shutdown has allowed the performance of long-needed repairs and renovations at SECCA. The building exteriors have been cleaned and painted, and the Hanes House — the site of SECCA’s administrative offices, among other facilities — is having its roof replaced.

Since the shutdown of state-government facilities, Carpenter said, at least one staff member has been physically present at SECCA every day in order to maintain security. Additional staff members have come in as needed, but otherwise the staff has worked remotely, and has kept in touch primarily through twice-weekly online Zoom meetings.

“We have followed and kept up with all best practices regarding sanitation, cleaning, etc., and we will be well-stocked with PPEs and clear signage when we are able to receive guests inside.”

A fundraising effort in April raised $31,000 in donations and renewed memberships, Carpenter said. The funds have helped offset financial losses caused by the shutdown.

The upcoming exhibition will include more than 200 works by more than 60 artists from around the world. Among these are well-known figures such as Buckminster Fuller, LeRoy Neiman, Kiki Smith, and Kara Walker, as well as local and regional artists.

Variations on the show have been exhibited at galleries and art museums in the United States and elsewhere (China, Serbia) since its inception in 2014, but it’s more a traveling concept than a traveling show, Earle said. It represents an unconventional, open-ended collaboration involving the original curator Tomas Vu, a professor of art at Columbia University; Brooklyn artist Brian Novatny; and Earle herself.

“Every work of art in this exhibition is the artist’s direct or indirect answer to the question of ‘What does drawing mean to you?’” Earle said. “For some it’s about process, for others it’s about form. Some artists are additive, and some are subtractive.”

With that in mind, Earle noted that the show expands conventional notions of drawing to include printmaking, animation, video projection, sculpture, collage, cut paper, and wheat-paste murals. She described it as “a huge mix of different artists and art styles. ... We are going to create a dynamic and extremely full show.”

“This is a timely show, with many works created in 2020 and in direct response to the rapidly changing world around us,” Earle said. “We are currently the only venue in the American South that is showing this exhibition —, so that gives us the opportunity to address some unique topics.

“It’s been a fascinating and slightly chaotic process,” Earle said of arranging the show’s SECCA appearance. “Some of the original artists on our list aren’t able to participate because they have artwork stuck in quarantine, or they themselves cannot travel to the U.S.”

She said that Vu, Novatny, and four artists represented in the exhibition will be driving much of the work to SECCA from New York in early August.

“Luckily all the installation crew have all quarantined together in upstate New York,” she said, adding that the crew will nonetheless observe social distancing and masking measures.

If SECCA’s public opening has to be postponed, Earle said, SECCA will make the “DRAWN” exhibition virtually available online.

“If I have to stay at SECCA myself and do live streams and other ways of connecting, that’s what I’ll do,” she said.