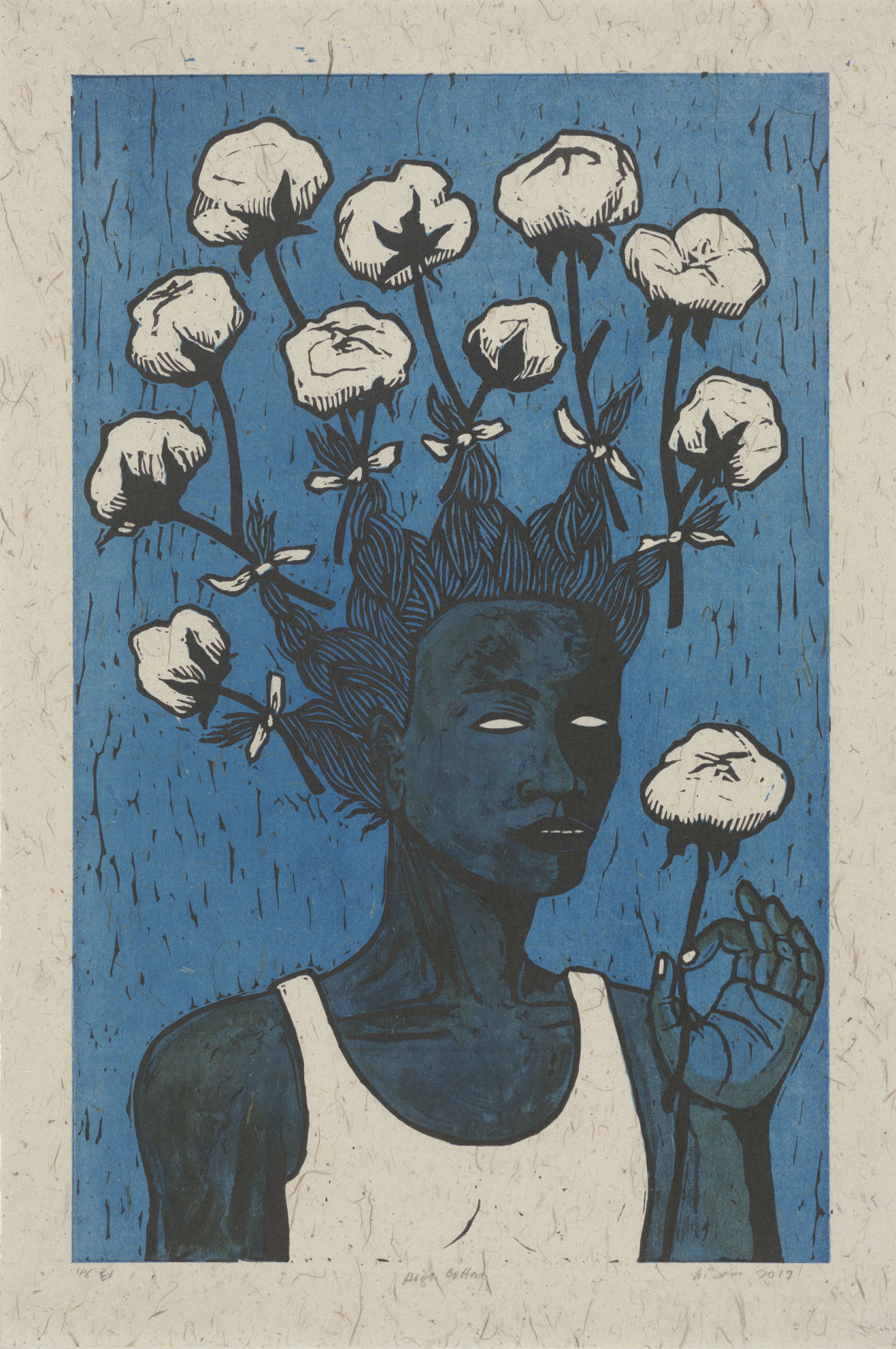 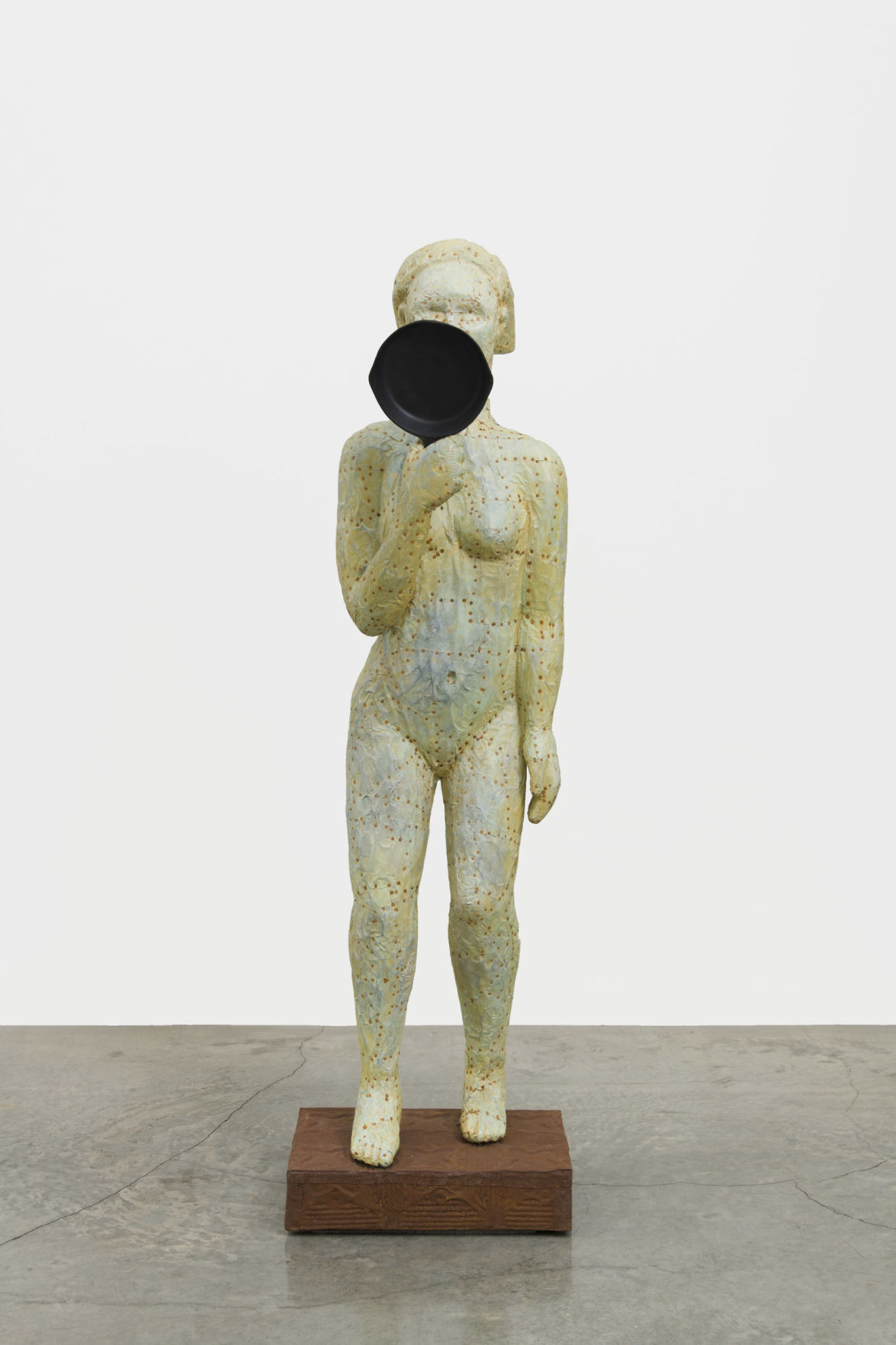 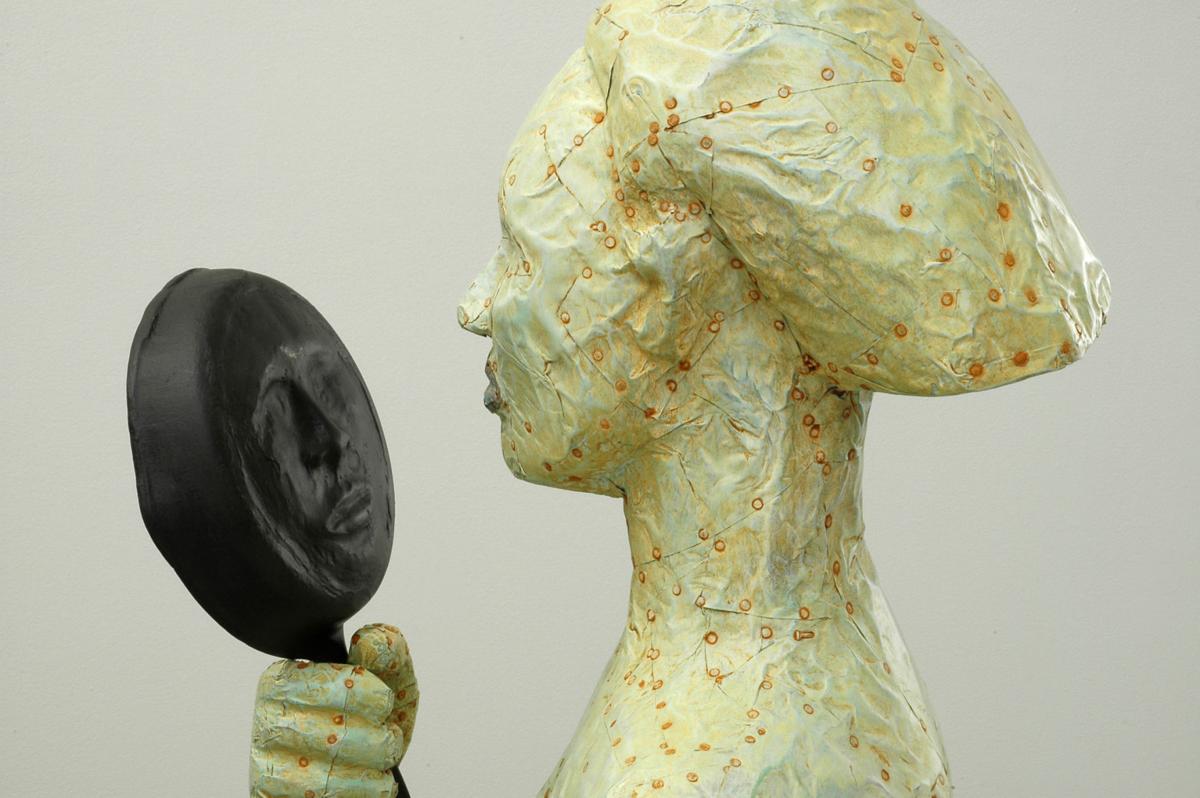 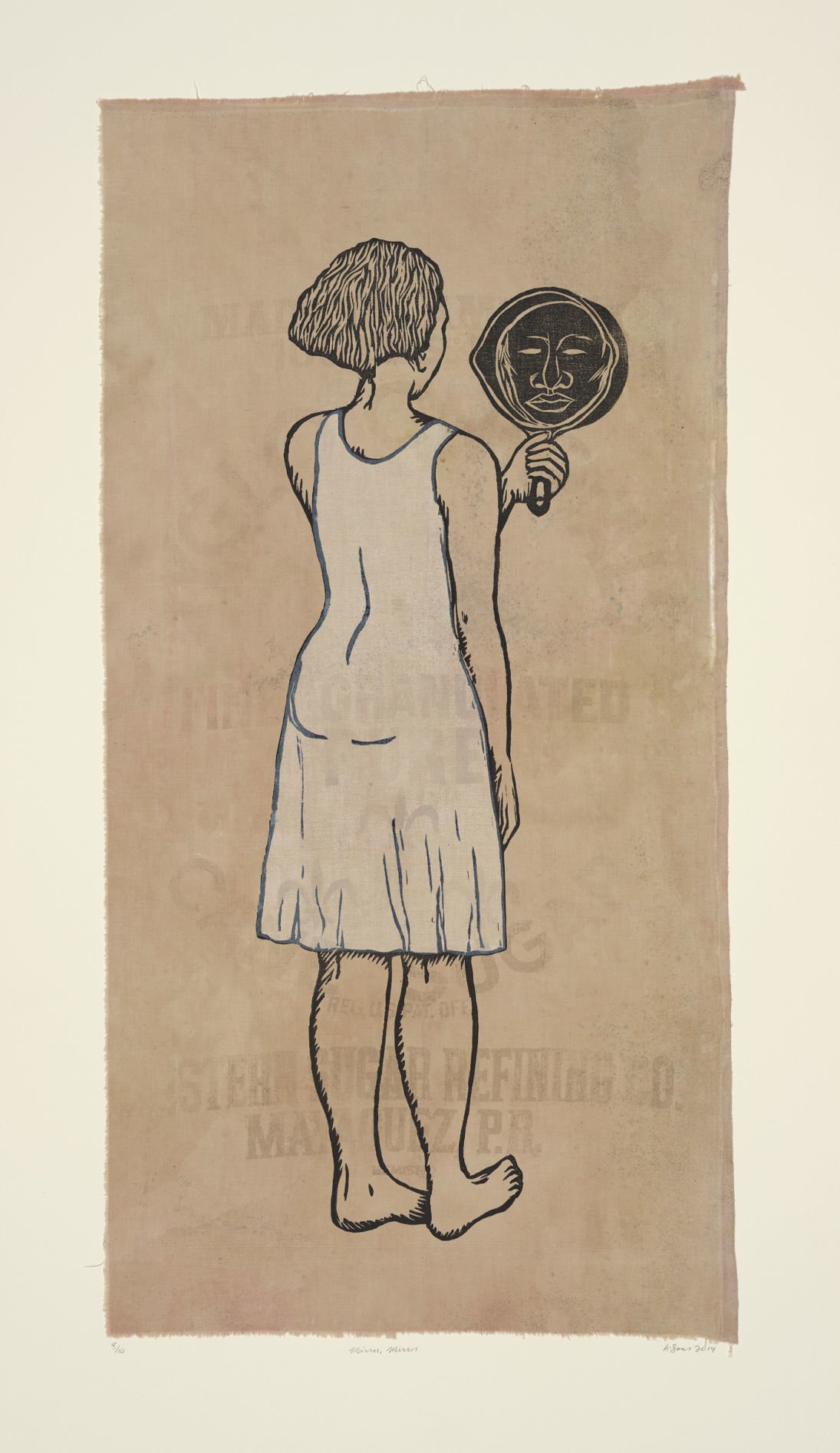 Regular visitors to the Weatherspoon Art Museum are well acquainted with Alison Saar’s “Compton Nocturne,” a large, mixed-media sculpture of a nude woman reclining on her right side, with a bottle tree growing out of her head. The museum acquired it in 1999, the year Saar made it, and ever since then it has occupied a prominent position at the window end of a hallway between the museum’s second-floor galleries. It’s one of my favorite pieces from the permanent collection.

Admirers of that piece and Saar’s other work won’t want to miss her current exhibition in two of those galleries. It brings together more than 50 pieces including several that also employ the bottle-tree-as-headdress motif.

A bottle tree is a tree augmented with empty bottles turned upside-down on its bare branches. It’s a tradition derived from West Africa’s Kongo kingdom and imported to the Americas with the slave trade. Bottle trees are usually found in the yards of houses they’re intended to protect. Proponents believe that evil spirits or negative forces are attracted to the bottles and drawn into them, whereupon they’re trapped and killed by sunlight illuminating the glass.

The show’s primary title, “Mirror, Mirror,” is also the title of an ongoing series Saar has developed, in which she treats the mirror as an emblem of self-reflection and the relationship between an individual and society. Because Saar is an African American artist concerned with issues especially pertinent to her culture, the latter relationship also entails a fundamental disjunction.

This equation is further complicated by Saar’s relatively light-hued skin, a factor in several pieces including a small sculpture she made in 2006, subtitled “Mulatta Seeking Inner Negress.” It depicts a nude, light-skinned woman gazing into a cast-iron skillet that doubles as a hand-held mirror framing a black face in relief.

Several years later, in 2014, Saar revisited this theme in a woodcut of the same title, depicting a similarly pale woman who is barefoot and wears only a simple white slip as she contemplates a hand-held skillet with a black face in it. The relationship between these two very similar pieces illustrates Saar’s description of her prints as two-dimensional “portraits” of her sculptures.

She takes the same two-pronged approach with the bottle-tree motif. Her previously described sculpture “Compton Nocturne,” from the Weatherspoon’s collection, is reprised in this show’s small, identically titled woodcut, also from 1999. The print’s indigo-blue ground reinforces the title’s nocturnal aspect.

In both cases the image serves as an emblem of personal protection. Physically vulnerable by virtue of her nudity and reclining posture, the anonymous woman retains symbolic protection by the bottle tree growing out of her head. Also implicit in the bottle tree’s direct relationship to her head — and by implication her mind — are references to her thoughts and her dreams.

The title name-checks the predominantly African American community of Compton, immediately south of Los Angeles, California, where Saar was raised. She created these works at a time when the breakout rap group NWA had made the city famous with its 1988 debut album “Straight Outta Compton.”

In those works and others on exhibit, Saar conflates the branches of trees or plants with the tightly plaited hair braids worn by many African American women and girls. Several such pieces transform their subjects’ hair into cotton-plant branches sprouting white cotton bolls.

The most powerful example is the relatively recent “White Guise,” a life-size sculpture made in 2018, again depicting a pale-skinned, barefoot woman wearing only a white slip. Her hair, partially rendered with tar, appears to be pulled up into seven braids that morph into cotton-plant branches. In her right hand she holds a clothes iron, sometimes used to straighten the tight, kinky curls of black women’s hair. The title alludes to the latter practice, to the whiteness of the cotton bolls, and to the racial dichotomy that informs most of Saar’s work.

Another of this sculpture’s distinctive features is its skin of antique, pressed-tin ceiling panels snugly nailed all over the figure’s carved-wood surfaces, like patches sewn together in a quilt. It’s the same technique Saar employed in her “Compton Nocturne” sculpture.

Hair symbolism figures prominently in a number of Saar’s other works, such as “Sweeping Beauty,” a vertical woodcut from 1997, whose nude, female subject is rendered upside-down with her hair transformed into the business end of a broom. This piece is clearly about the domestic-servant role to which many African American women have been professionally relegated in our society.

In “Tango” (2005), two virtually identical, nude women are seemingly forced into a combative relationship by virtue of their long tresses having been tied together in a large knot between their heads. Mirror images, they confront each other like boxers poised to punch each other. It reads as an indictment of social customs and beauty standards that pit women against each other.

Women’s hair is also a foregrounded motif in “Deluge” (2016), another image of a nude woman, in this case standing upright, with her extremely long, straight hair cascading forward to her feet. Although we can see her face through a dark veil of hair, it apparently blocks her from seeing anything in front of her.

The title of another print, “Conked,” is a slang term referencing a technique of straightening black men’s and women’s hair. The subject in this 1997 woodcut, is a woman’s disembodied head with pale skin and empty eye sockets (like those of the hair-blinded woman in “Deluge”). Her long hair is indeed straight — and red, connoting biraciality — but it’s been pulled through her open mouth and out the bottom of her severed neck. A grisly, unsettling image, it alludes to forms of social acceptance that require severing oneself from one’s culture and ethnicity.

Saar clearly views such compromises as tantamount to suicide.

What: “Mirror, Mirror: The Prints of Alison Saar from the Collections of Jordan D. Schnitzer and his Family Foundation”

A lively crowd might have been expected in Winston-Salem’s Downtown Arts District on New Year’s Eve, since the occasion coincided with the fir…