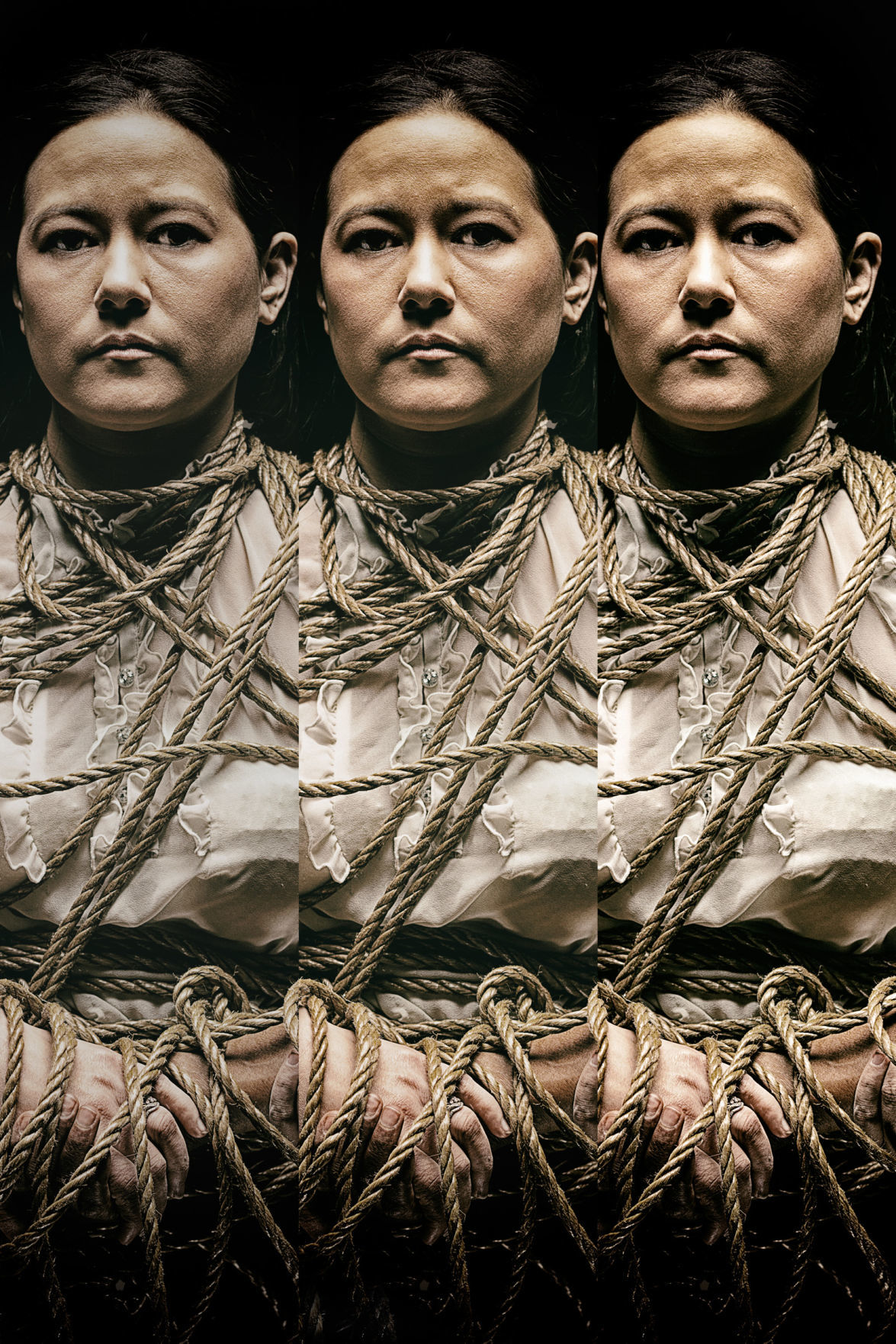 “US” (above) and “War” (below) are also in the “Common Ties That Bind” exhibition at the Sawtooth. 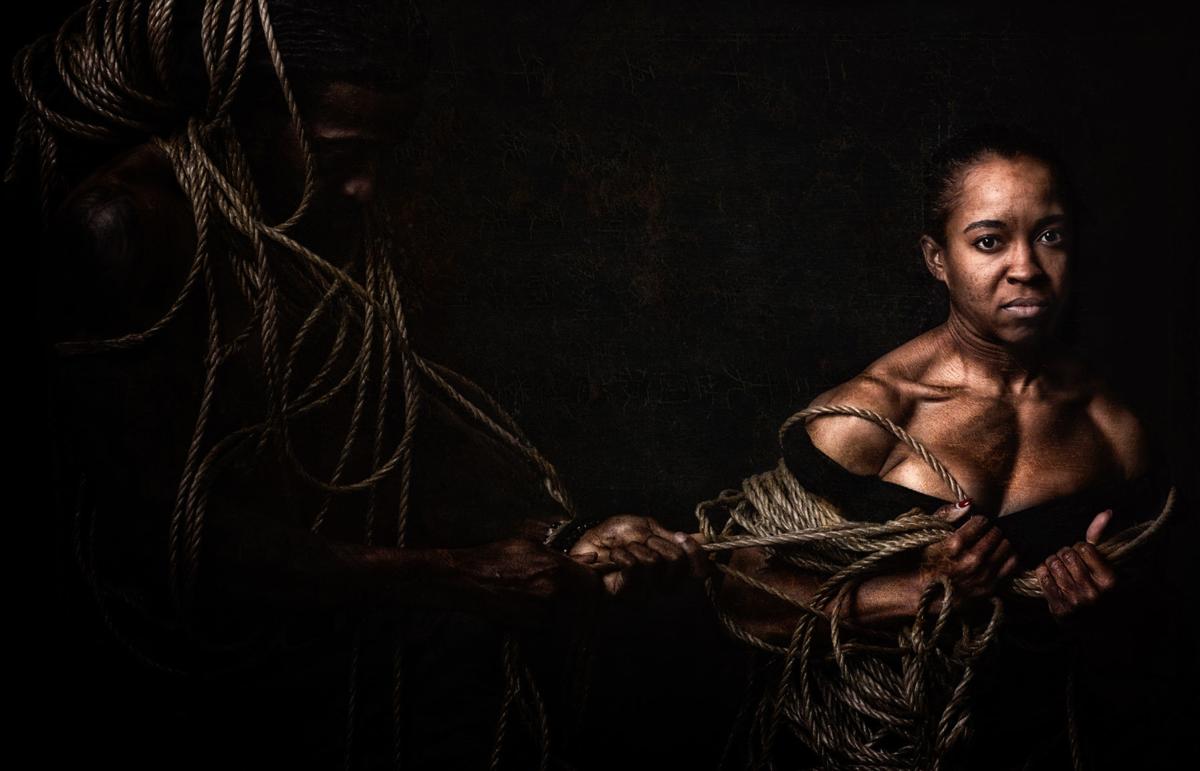 “Mary Turner” (left) and “Innocent” by Owens Daniels are in the “Common Ties That Bind” exhibition at the Sawtooth. 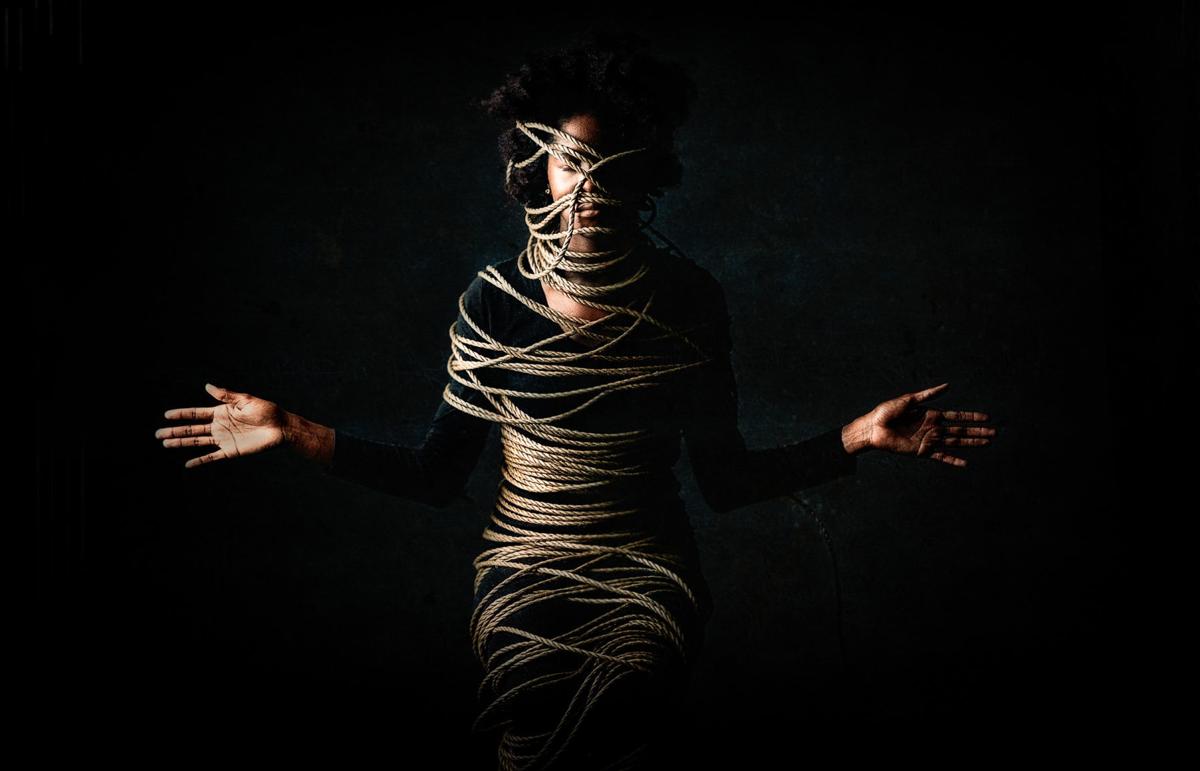 “Innocent” is in “Common Ties That Bind” exhibition in the Sawtooth School’s Davis Gallery. 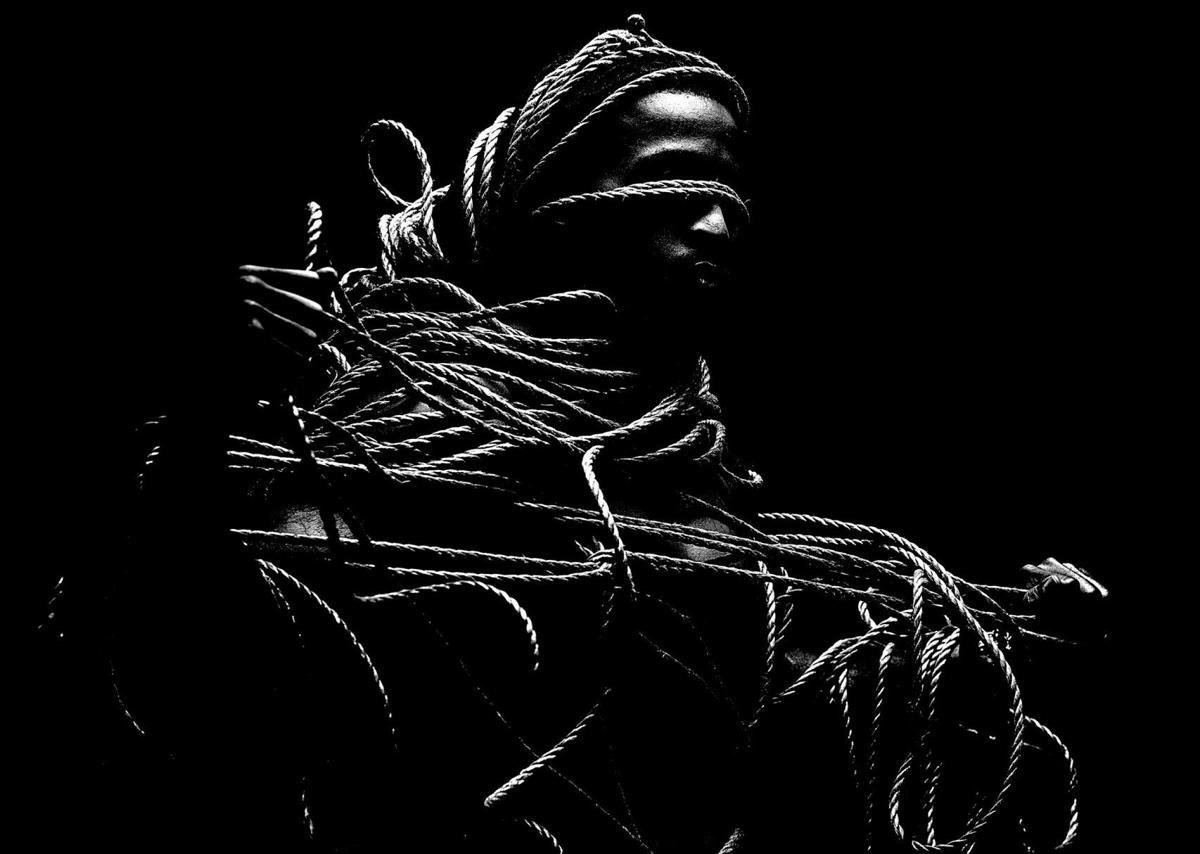 "War" is in "Common Ties that Bind" exhibition at the Sawtooth.

The symbolic significance of rope for black Americans should require no explanation. Virtually every adult in the United States knows that it was the material customarily used by white mobs to execute blacks in despicable acts of vigilante “justice” during the 19th and 20th centuries.

For his current exhibition at the Sawtooth School for Visual Art’s Davis Gallery, local photographer Owens Daniels developed a series of 11 images that build on that disturbing symbolic connection. Some of these works also allude to rope’s ability to connect and hold things together, as suggested by the exhibition’s title, “Common Ties That Bind.”

The practice of lynching — execution of black victims by hanging, without a prior jury trial — was referenced in the eerily poetic song “Strange Fruit,” written by amateur composer Abe Meeropol and popularized in a 1939 recording by jazz vocalist Billie Holiday. Last year a national memorial to this country’s black lynching victims — the six-acre National Memorial for Peace and Justice — opened in Montgomery, Ala. Researchers who worked on the project documented more than 4,000 “racial terror lynchings” in the post-Reconstruction era between 1877 and 1950.

Like other works that Daniels has exhibited locally in recent years, each one of these large-format photographs is a carefully staged, dramatically illuminated portrait of one or more people. All are printed on stretched canvas, like paintings, and all incorporate lengths of rope as integral parts of the imagery. In some cases Daniels has attached actual ropes to the canvases.

The show’s most powerful and disturbing image by far is the only one that directly references lynching. Its focal point is the wide-eyed, accusatory face of a young, black woman at the right, whose body is heavily encumbered by ropes that are also wound around the body of a black man almost completely enveloped by dark shadows in the left side of the photograph.

As indicated by its eponymous title, it represents a historical figure named Mary Turner, the victim of a vicious lynching and torture by a white mob in Valdosta, Ga., in 1918. According to black theologian James Cone’s 2011 book, “The Cross and the Lynching Tree,” her husband Haynes Turner was lynched first, as punishment for an infraction he didn’t commit, and she protested, vowing that she would see his killers brought to justice.

In retribution for her speaking out, the local sheriff arrested her and turned her over to the mob, who proceeded to strip her, hang her upside down by the ankles, soak her with gasoline and roast her to death. She was several months pregnant at the time, and in the midst of her horrifying ordeal, a white man slit open her belly with a hunting knife, whereupon her unborn infant fell to the ground and was stomped to death by the mob.

In a related vein, although not grounded in a specific historical incident, is a pair of images respectively titled “Innocent” and “Guilty,” displayed one above the other. The photographs themselves are identical, both depicting a seated black woman with ropes tightly wrapped around her face, torso and thighs. She holds her unbound arms and hands out on either side of her body, with her palms open in a gesture indicating surrender.

The lower image, “Guilty,” differs from the one above it in that the canvas has been diagonally slashed from corner to corner, apparently with a knife, to form an X shape. Ropes have been pulled through holes strategically punched in the canvas and tightly bound in vertical formations on either side of the image.

In Daniels’ image titled “Zeus,” a shirtless black man with dreadlocks strikes a frontal pose with his muscular arms crossed over his chest. Although he looks defiant, his plight is essentially the same as the woman in “Guilty.” Ropes in the photograph are wrapped around his neck and arms, and additional lengths of rope have been pulled through holes in the canvas, forming a blindfold over his eyes and an X-shape across his upper body. These ropes dangle down below the canvas to pile up on the floor below.

Although most of the other photographs in the show feature black subjects, the series as a whole embodies a multiracial, multicultural viewpoint.

The woman portrayed in triplicate in his image titled “US” looks as if she might be an American Indian, Latin American or both. Wearing a white, ruffled blouse buttoned to her neck, she also appears to be at least partially tied up by a rope wound around her torso in the lower part of the photograph. Despite her apparent predicament, she meets the viewers gaze with a calmly stoic expression.

The same woman appears to have freed herself from the rope that binds her in “Look At ME.” Seated on a recamier (an upholstered, sofa-like seat with no back), she strikes an unusual, tentative pose, with knees together and ankles apart as she holds one end of the loosened rope in her right hand. As if to call further attention to her newly liberated status, she wears an oversize necklace of large, clear-glass beads.

The white woman portrayed in Daniels’ “Tom Boy” strikes a boldly confrontational pose, with her head tilted back so she seems to look down at the viewer. Her hands appear to be untying a rope wound around her throat and shoulders, and her right arm is partially bared, revealing part part of a tattoo.

Again, the photographed rope in this image is augmented with a real rope attached to the canvas. Also, like the bound woman in the previously described “Guilty,” a large “X” has been slashed into the canvas, presumably with a knife. This photograph’s title and the woman’s relatively boyish hairstyle and blouse or shirt suggests that she represents a lesbian who refuses to be intimidated by any would-be persecutors.

In this series Daniels applies a relatively straightforward concept to make a strong, provocative statement about our common humanity. It strikes me as a particularly timely contribution during a time marked by an alarming resurgence of racial and cultural prejudice.

What: “Common Ties That Bind”

The hit Broadway show “Wicked” is onstage through Oct. 24 at the Steven Tanger Center for the Performing Arts, 300 N. Elm St. in Greensboro.

“US” (above) and “War” (below) are also in the “Common Ties That Bind” exhibition at the Sawtooth.

“Mary Turner” (left) and “Innocent” by Owens Daniels are in the “Common Ties That Bind” exhibition at the Sawtooth.

“Innocent” is in “Common Ties That Bind” exhibition in the Sawtooth School’s Davis Gallery.

"War" is in "Common Ties that Bind" exhibition at the Sawtooth.