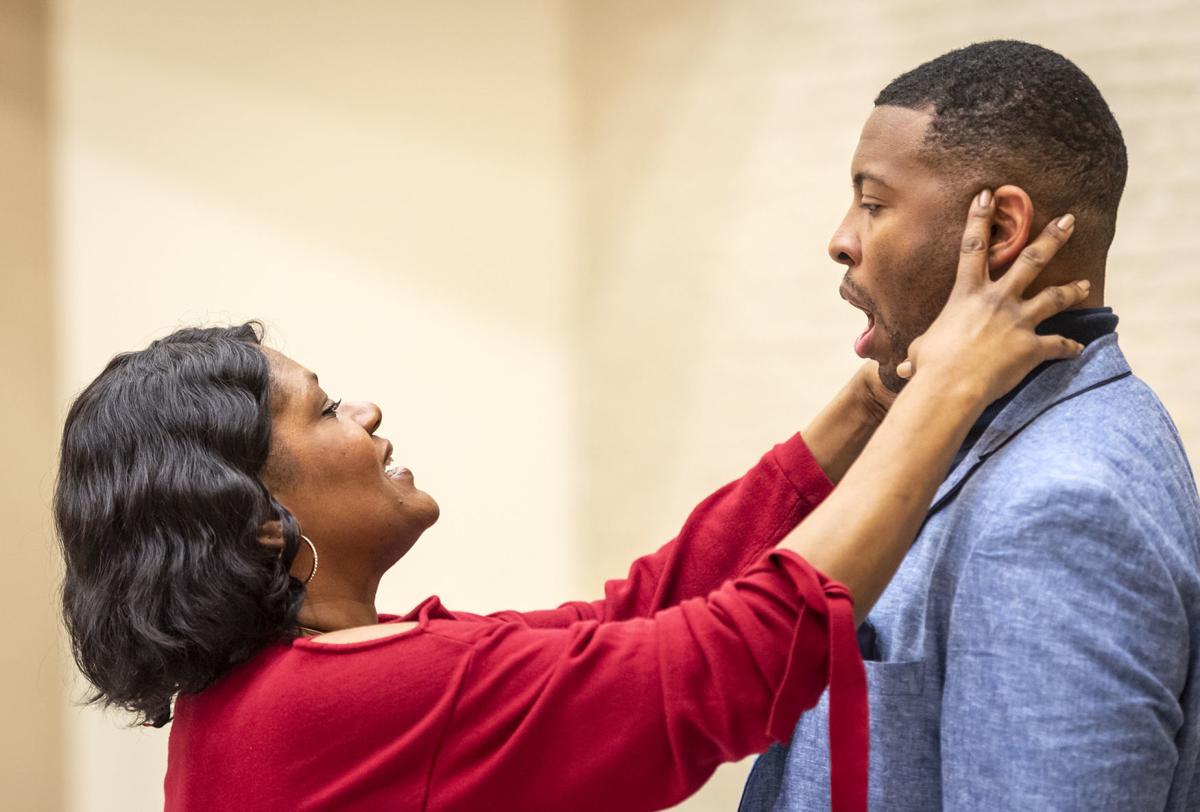 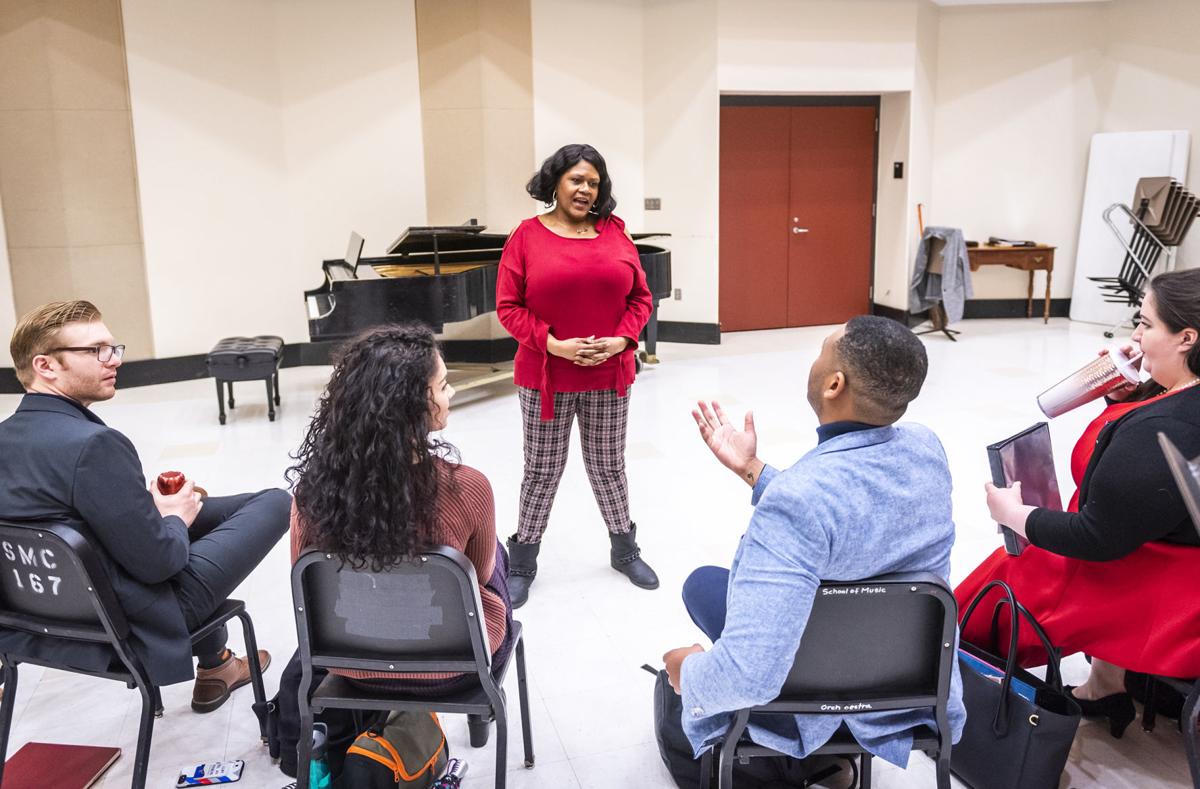 Riding imaginary horses, biting imaginary apples, smelling imaginary roses — and actually snorting: These are just some of the lengths that Tichina Vaughn will go to to help fledgling opera singers shimmer and shine.

Vaughn, a singer originally from Winston-Salem and a UNC School of the Arts alumna, has been performing professionally for more than 30 years — from the Metropolitan Opera in New York to La Scala in Italy to Semperoper in Dresden, Germany.

In December, she returned to the U.S. to perform the role of Lily in “Porgy and Bess” at the Met where she made her debut in the role in 1989.

Next, Vaughn is off to Vienna, Austria, for Prokofiev’s “Fiery Angel”; then to Philadelphia for “Elektra,” and Seattle for “Cavalleria Rusticana.” She will perform Mary in “The Flying Dutchman” with the Royal Opera at Covent Garden in London in March 2021.

For three weeks this past October and just last week, she returned to her alma mater to coach and teach master classes to the fellows in UNCSA’s AJ Fletcher Opera Institute.

Vaughn listened intently, praised Peele’s work and encouraged him to allow “space and intimacy” in his singing. She asked permission to touch various places on his body to help him bring his awareness to the back of his neck, his rib cage.

“We don’t have buttons,” she said. “We have muscles that we must match to the senses. We can teach these muscles to work in a particular way.”

Vaughn asked Peele to sing the piece again, this time with knees bent and with his mouth and jaw in an apple-biting position.

Indeed, a previously very good performance had acquired a sheen.

Next up was Virginia Sheffield, a dramatic soprano, who sang a long aria from “Street Scene” by Kurt Weill and Langston Hughes. Sheffield opened her mouth, and the bare practice room rang with music.

Vaughn complimented Sheffield on her performance and said, “But it can be even better.”

She then taught Sheffield a technique that involved snorting at the top of her throat and keeping her knees bent and bouncy like Peele’s. It was hilarious, but it worked, and Sheffield’s voice took on a dazzling shimmer.

“These singers are already so good,” Vaughn said. “There’s just a little finishing that can take a voice from being heard by a regional opera to being heard by the Met.

“You are trying to get your body and your muscles to work in a certain way, so you trick them into it until you don’t have to.”

The only downside to a singing career, Vaughn said, is that you have to be really disciplined. “A lot of times you can’t go out with your friends,” she said. “You might want to be lazy one day, but you have to practice. You have to take care of yourself, especially if you’re in a series of performances, you have to be careful to stay healthy — and that’s not a bad thing.

“The best thing is getting to express yourself in a very unique way and to inhabit all these other people.”

She said that her favorite role in the opera repertoire is whatever one she is doing currently, “But I love Azucena in ‘Il Trovatore’ and ‘Klytaemnestra’ in ‘Elektra.’”

Vaughn encouraged the Fletcher fellows to dream big, explore all avenues and take every opportunity to audition for roles.

“Opera is a big world, and it’s happening 365 days a year,” Vaughn said. “Agents are looking for new artists, for the next new young thing.”

Vaughn has recently gone freelance after about 10 years as an employee of the State Theater of Saxony in Dresden, Germany.

She has jobs lined up through March 2021.

“It’s amazing,” she said. “And I’m so determined that the people who are coming up behind me get it.”

Steven White, the music director at Opera Roanoke who recently guest conducted at UNCSA, told the Journal that America is currently experiencing an opera Renaissance.

“Opera repertoire has expanded and is expanding. ...” White said. “Here in America, more operas are being written, and old music is being rediscovered.”

After graduating from UNCSA in vocal performance, Vaughn won a spot in the Young Artist Development Program at the Met where she studied for three years. When her training ended, Vaughn sang small roles at the Met for another year. Then, she started getting work nationwide.

Vaughn started singing in Europe in 1996 and, after a breakout performance as Madame Quickly in “Falstaff,” was hired as a member of the ensemble at the Staatsoper Stuttgart in Germany. While there, from 1998 to 2006, she was awarded the title Kammersängerin, which is like an honorary doctorate in the U.S., she said.

“This lady is simply amazing,” said Tony Woodcock, interim dean of the School of Music at UNCSA. “She is someone whose career we have watched for many years.” Woodcock recently saw Vaughn’s performances at the Met and at a successful fundraiser in New York for the school.

In 2016, Vaughn made her debut at La Scala in Milan, Italy, in the role of Mariah, a shop-keeper and an important fixture in the Catfish Row community where “Porgy and Bess” is set. In 2017, Vaughn performed the role of Filipievna in “Eugene Onegin” at Spoleto Festival USA in Charleston, S.C.

Vaughn has a son, Kristopher Lawrence, 26, and a daughter, Kiana, 18, who is pursuing a career in music.

She has one pet, a Bolonka Zwetna, which means “little lap dog” in Russian. Her name is Kiki.

Vaughn’s voice is “just what opera wants,” he said. “Her voice is just as rich as it can be. It’s a rich, round voice that, in the upper registers, gets a shimmer and won’t let go. ”

Vaughn said that going to UNCSA was life-changing for her. “It was a great laboratory of artistic and academic learning.”

Besides opera, Vaughn performs jazz, tango, big band, gospel and spiritual music. She recorded Wagner’s Ring Cycle at the Stuttgart Opera, which was filmed for the Euro Arts and recorded on a Naxos CD set.

Despite her success, Vaughn said that she’s never planned what would happen next in her career.

Instead, “I just put forth my best effort and go with the flow. ... It’s the only way to handle this business.”