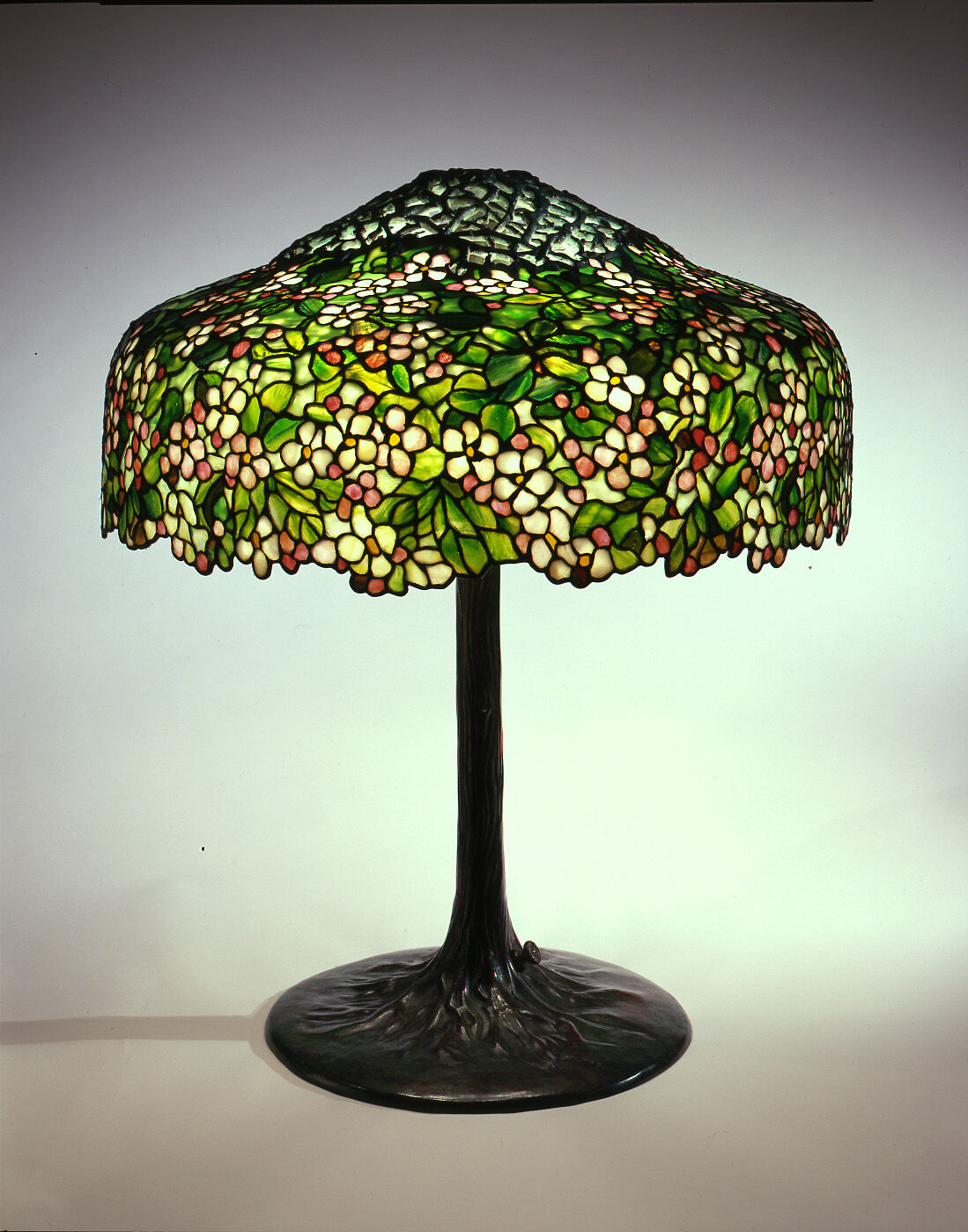 "Tiffany Glass: Painting with Color and Light" will be on display through Nov. 29 at Reynolda House Museum of American Art's Mary and Charlie Babcock Wing Gallery. 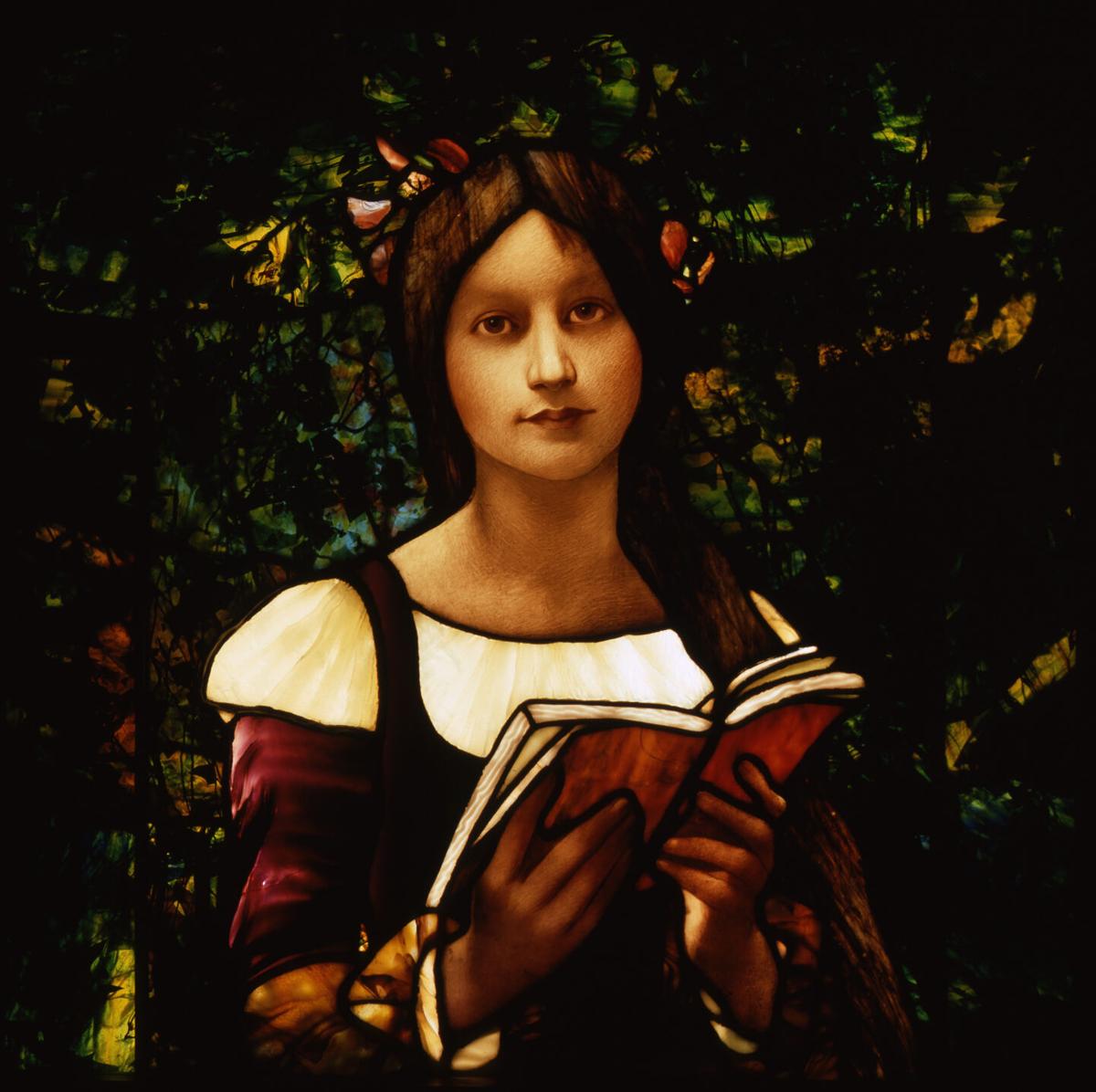 "The Reader" will be on display through Nov. 29 at Reynolda House Museum of American Art's Mary and Charlie Babcock Wing Gallery.

The leaded-glass lampshades, ornamental windows, vases and other dazzling decorative objects made at New York’s Tiffany Studios during the late 19th and early 20th centuries were the height of fashion during this country’s so-called Gilded Age. They passed out of style by the early 1930s, though, when the studios were closed in the midst of the Great Depression.

In keeping with the adage “What goes around comes around,” Tiffany glass pieces made a comeback in the late 1960s, when psychedelic rock-concert posters and other popular art forms helped revive the Art Nouveau aesthetic. Since that era the original Tiffany products have continued to be prized by collectors and designers.

Almost everyone has seen reproductions or cheap knock-offs of Tiffany lamps. Opportunities to see the real thing are rarer, and that’s what makes the current exhibition at Reynolda House so special. “Tiffany Glass: Painting with Color and Light” is a traveling show from the the Neustadt Collection of Tiffany Glass, the world’s largest repository of original Tiffany products, housed in the New York borough of Queens, near the site of Tiffany’s original glass factory.

The show includes 25 original Tiffany pieces. Related displays celebrate key individuals involved in their production and show how they were manufactured, assembled and sold. Also on view are three relatively high-quality forgeries from the late 20th century. Exemplifying that era’s Art Nouveau revival, these faked Tiffany lamps and their accompanying texts might help collectors avoid getting fooled.

Louis Comfort Tiffany (1848-1933) studied painting, worked in interior design and served as the design director at his father’s famous jewelry store, Tiffany and Company, before he went into the decorative-glass business in 1885. By the beginning of the 20th century his studio established an international reputation for its distinctive windows and lampshades assembled from carefully cut pieces of colored glass soldered together with copper foil.

At first Tiffany created his pieces out of cheap, colored glass from jars and bottles, whose impurities yielded unplanned effects that he savored, but he soon developed his own brand of opalescent glass that contained streaks of milky, iridescent color.

Referencing the traditional means of joining glass pieces with lead, the term “leaded glass” was retained into the present era, even though Tiffany’s studios switched to copper foil because it allowed for thinner joints.

During its heyday Tiffany’s factory employed more than 300 artisans, including a team of talented women designers. Two of these women - Agnes Northrop and Clara Driscoll - are highlighted in the exhibition, as is British designer Frederick Wilson, also a key figure in the success of Tiffany Studios.

The show opens with two of Northrop’s designs from around 1910 - a pair of fairly large windows featuring panoramic landscapes assembled from pieces of stained glass in carefully chosen colors and patterns. Measuring between 22 and 70 inches, they’re both striking, but “Well by Fence Window” is a fairly generic image. “Tropical Landscape Window” is a more exotic scene featuring cactus plants, palms and banana trees foregrounded against a mountain-bordered lake.

Wilson designed what is arguably the show’s most exquisite piece, and one of its earliest works, “The Reader,” which dates from around 1897. Based on a work by French painter Jules-Joseph Lefebvre, it’s a portrait of a young, pale-skinned woman holding an open book and posed in front of a forest background created from a composite glass type known as foliage or confetti glass.

Driscoll designed the shade for one of Tiffany’s earliest and most popular lamps, from about 1899, featuring a pattern of interconnected dragonflies with peacock-blue thoraxes. It’s one of the show’s 20 original Tiffany lamps, including three floor lamps and three others designed to be suspended from above by chains.

Other highlights among these lamps are a “Lotus Pagoda Library Lamp,” a “Heavy Ribs Reading Lamp” and a “Bamboo Floor Lamp.”

Ancillary components of the exhibition include a display of different glass types that Tiffany manufactured, and a display of tools, cut-glass pieces and other items that collectively illustrate the means of assembling lamps at Tiffany Studios.

Also of special interest is a substantially enlarged 1913 photograph of Tiffany’s Manhattan showroom on 45th Street at Madison Avenue.

Who: Louis Comfort Tiffany and associates

What: “Tiffany Glass: Painting with Color and Light”

"Tiffany Glass: Painting with Color and Light" will be on display through Nov. 29 at Reynolda House Museum of American Art's Mary and Charlie Babcock Wing Gallery.

"The Reader" will be on display through Nov. 29 at Reynolda House Museum of American Art's Mary and Charlie Babcock Wing Gallery.