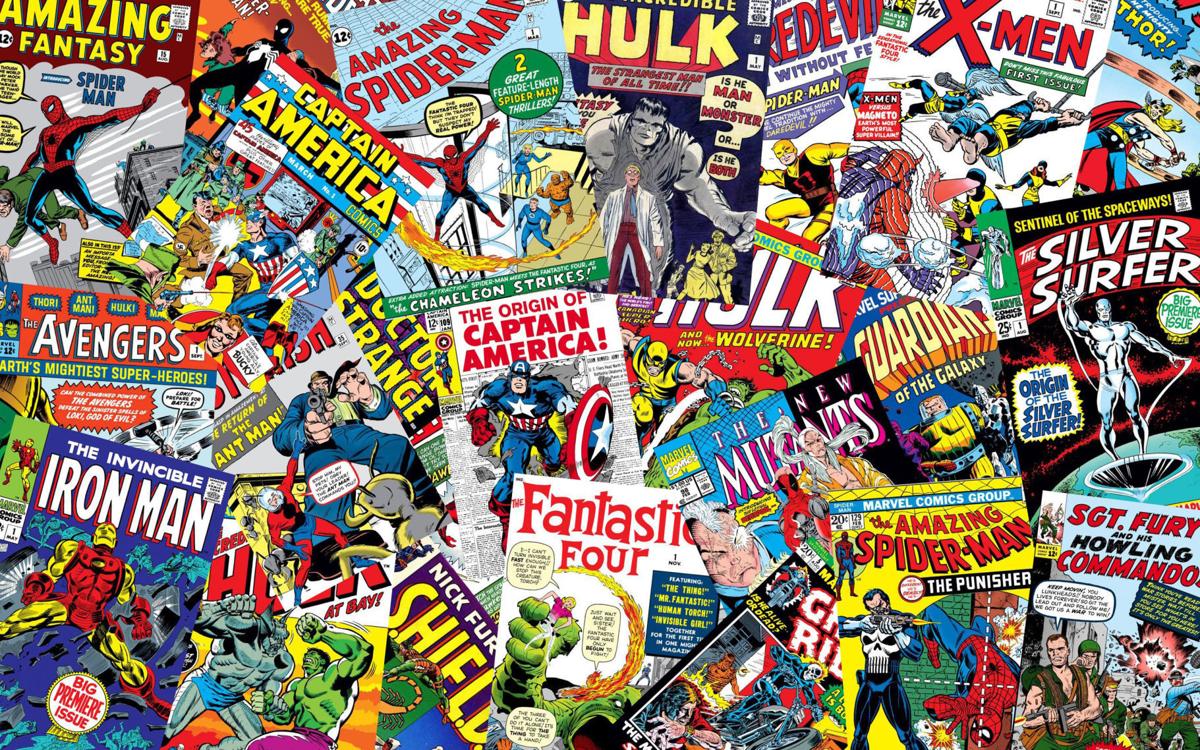 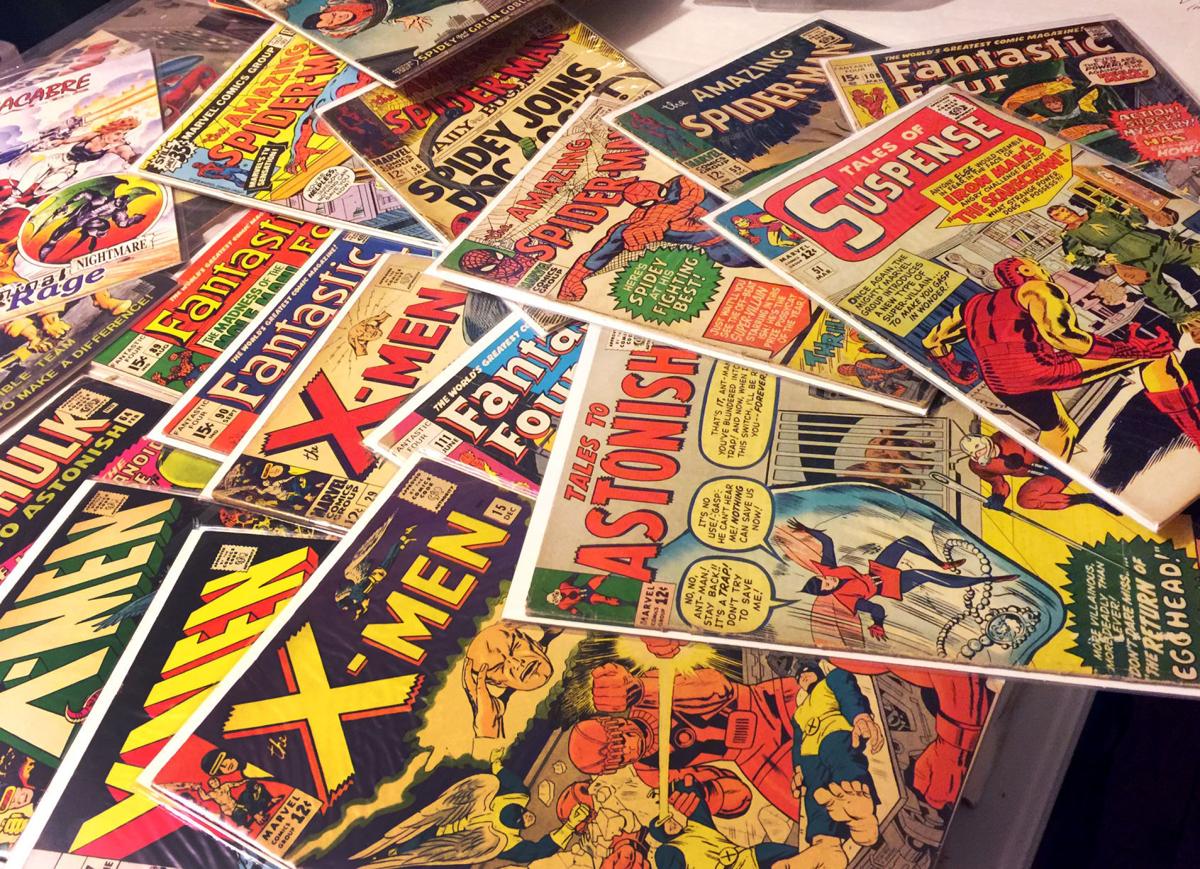 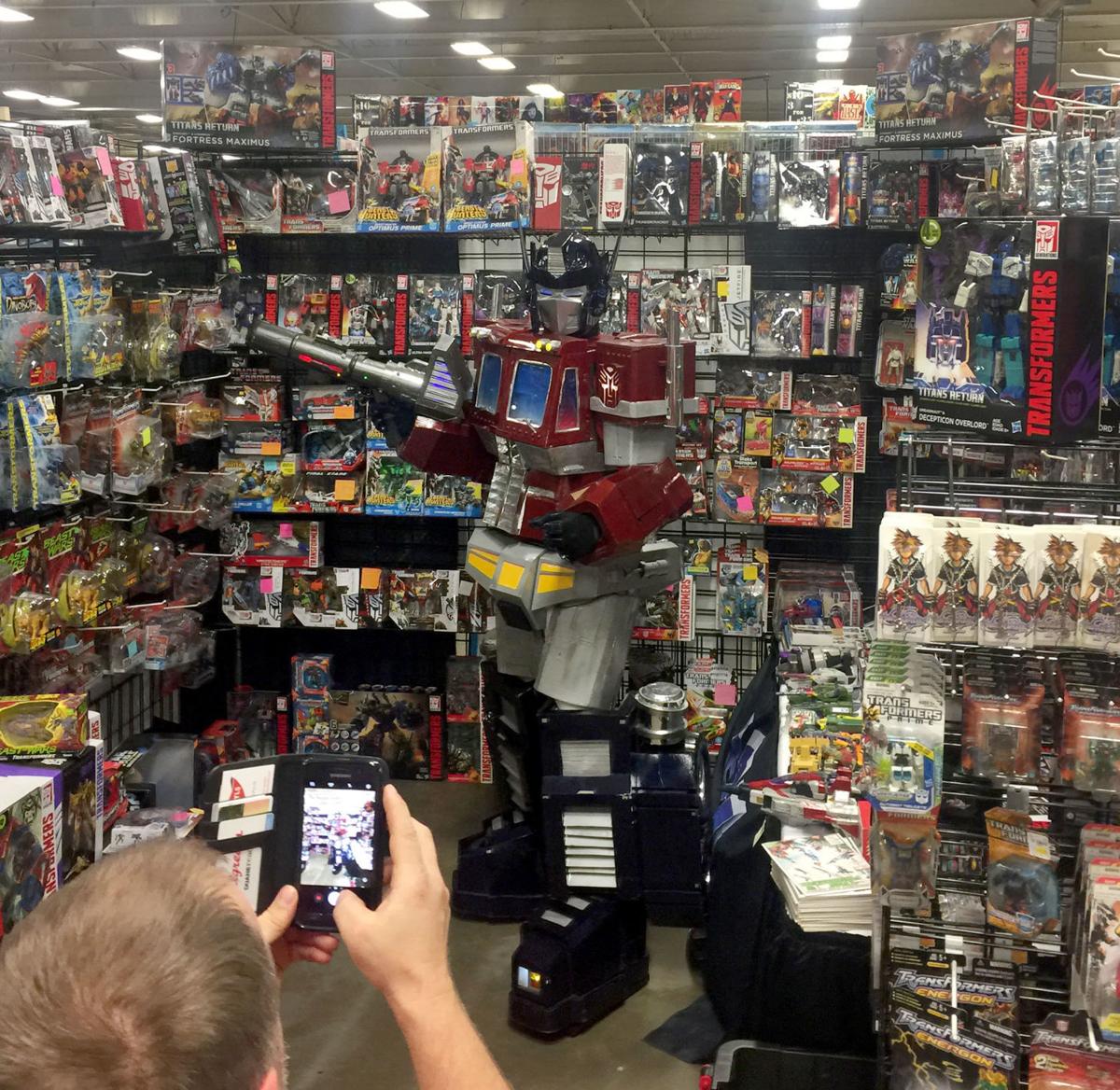 A fan dressed as Optimus Prime at a ComicCon booth with comics and figurines. 20180329w_rel_cover 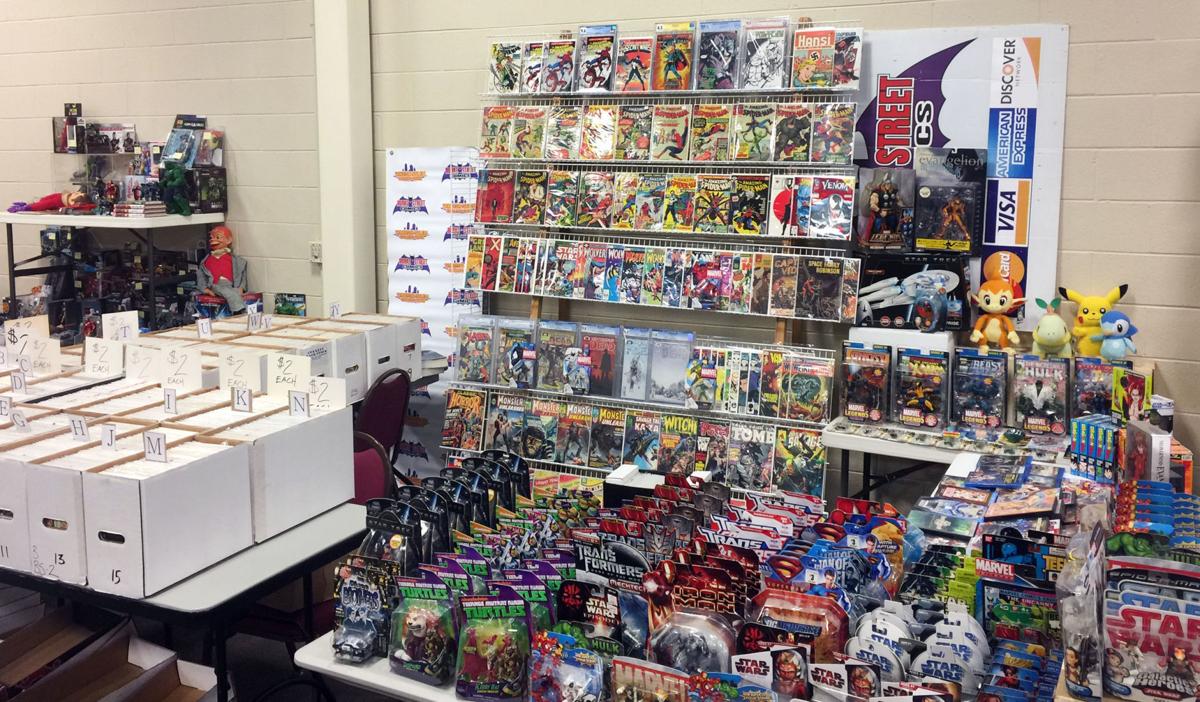 ComicCon booth with comics and figurines. 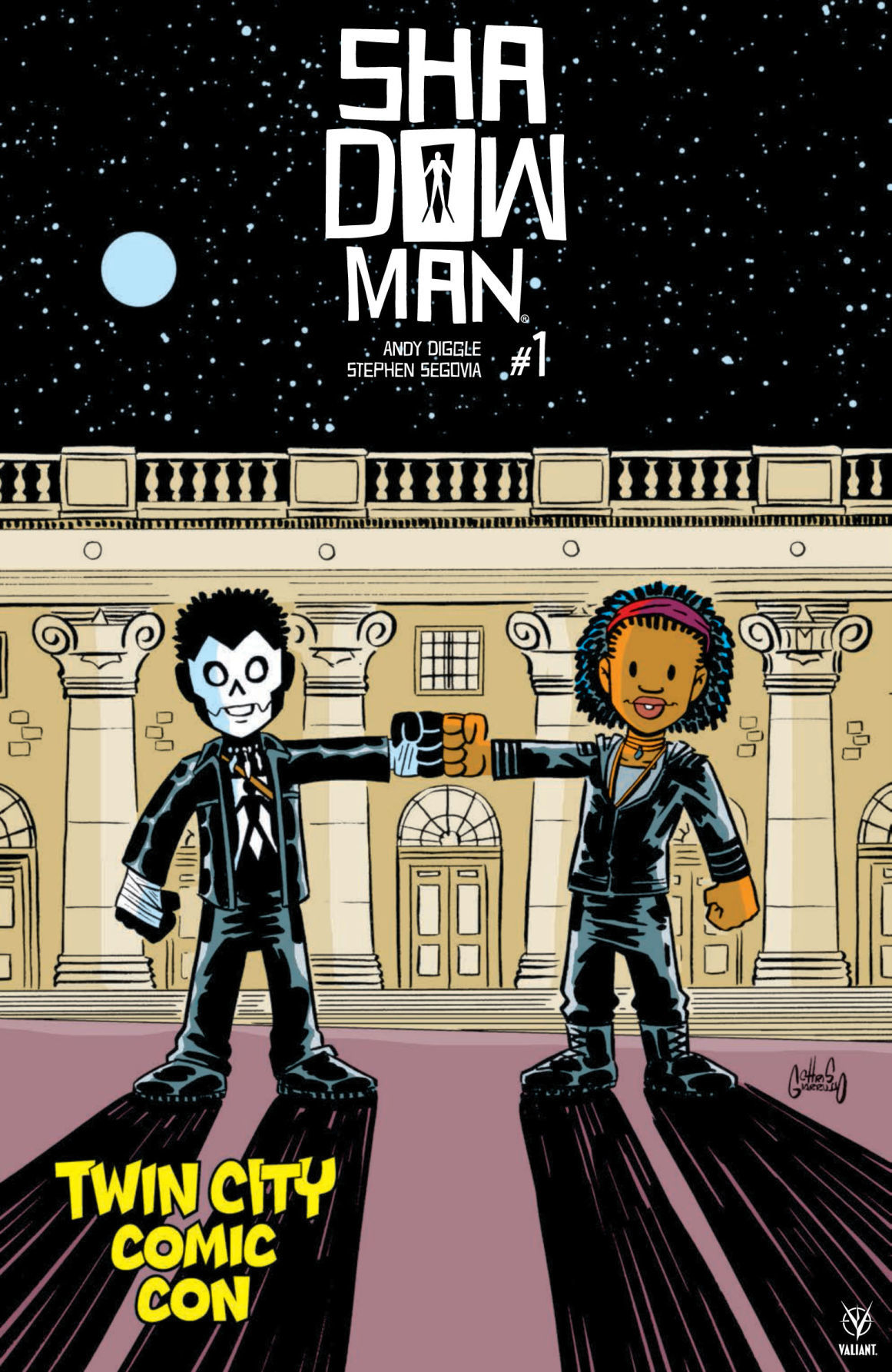 Shadowman #1, an exclusive variant cover that will be given to the first 400 paid attendees at the Twin City Comic Con. 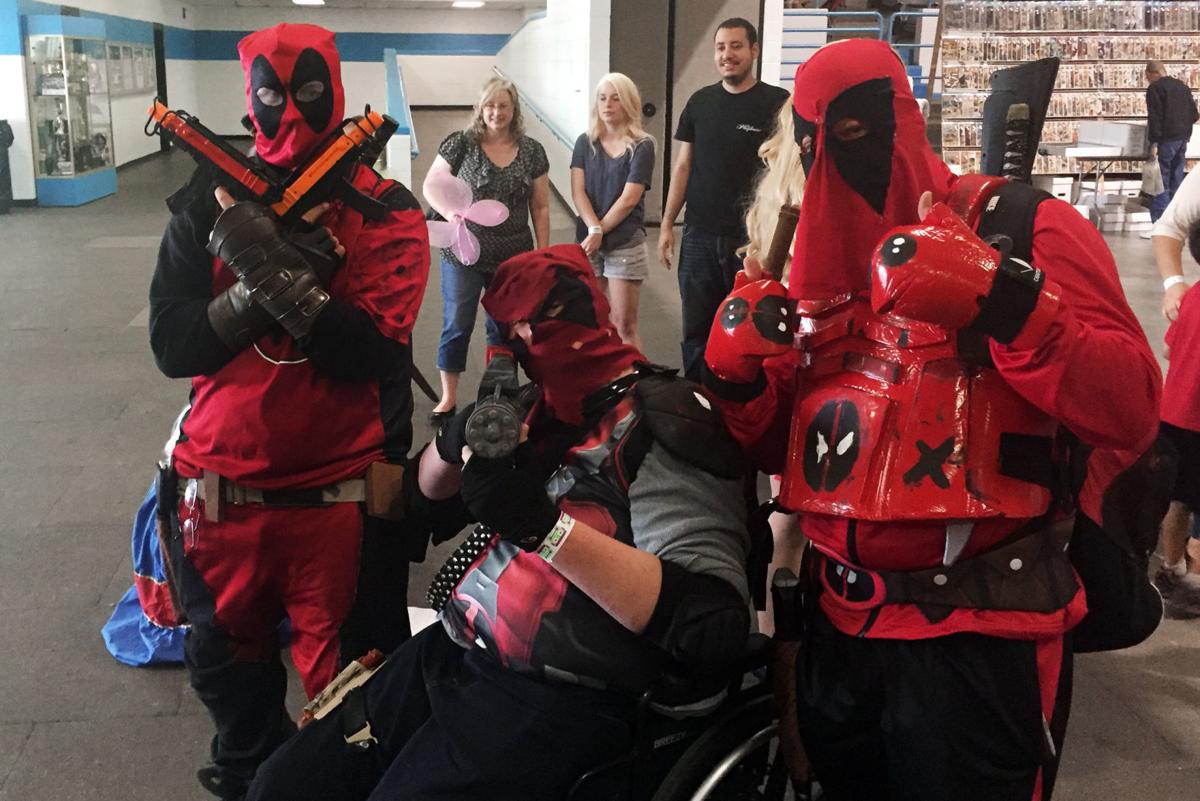 Cosplayers dressed as Deadpool at the Winston-Salem ComicCon in 2016. photo by Tim Clodfelter 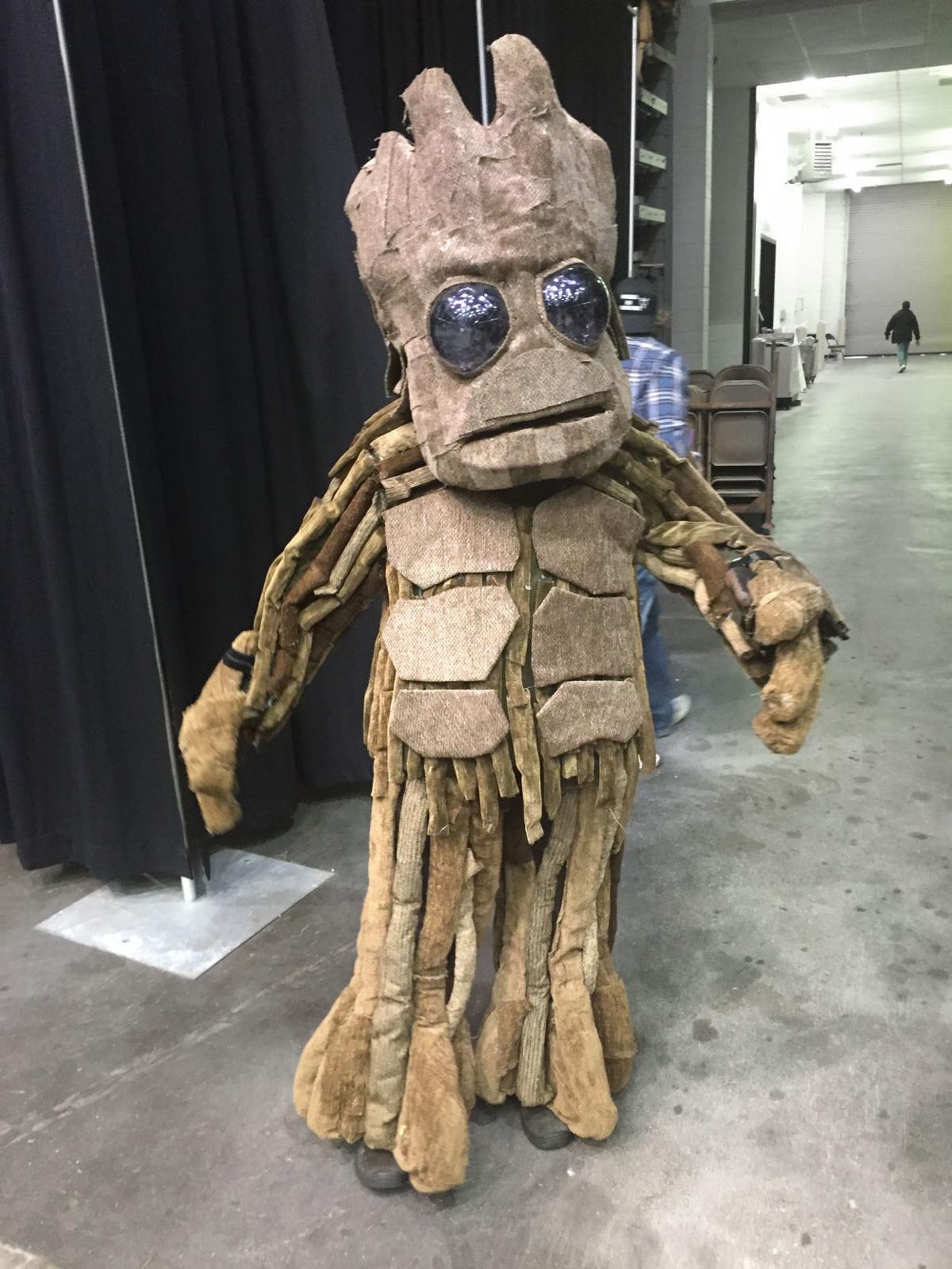 A cosplayer dressed as Groot from “Guardians of the Galaxy” at Winston-Salem ComicCon in 2016.

Over the next two weekends, comic book fans will have opportunities to meet up with fellow fans, shop, dress as their favorite characters and celebrate the joys of being geeky at two comic book conventions being held in downtown Winston-Salem.

On Saturday, there’s the Winston-Salem ComicCon, which has moved from its previous location at the fairgrounds to the newly renovated Benton Convention Center. And a week on April 8, there’s the Twin City Comic Con, which will be held at the Millennium Center.

It’s a good time to be a comic fan, with “Black Panther” proving to be a mega-hit in theaters and the new “Avengers” movie just a few weeks away, plus a slew of comic-inspired TV shows on broadcast and cable including the recent shows “Black Lightning” and “Krypton.” And April will be a big month for comics, including the April 17 release of the 1000th issue of DC’s “Action Comics,” the title that introduced Superman.

Winston-Salem ComicCon is organized by Ryan Lusk, the general manager and owner of Burke Street Comics, which used to be on Burke Street but is now on Sixth Street, and also at Cooks Flea Market.

The convention has been going for nine years now, and in recent years has expanded to twice-yearly shows, making this the 15th show overall.

This Saturday’s event is at the Benton Convention Center, 301 West Fifth St., from 11 a.m. to 5 p.m. In moving to the Benton Center after many years at the fairgrounds, Lusk said the convention has decided to focus more on comics and toys than in recent years, with 8,000 square feet of vendor space and vendors coming from all along the east coast and Midwest.

Guests will include artists such as Bridgit Connell, a writer and illustrator from Charlotte whose comic “Brother Nash” is being published by Titan Comics; artists John ‘Waki’ Wycough and Johndell Snead from Tsunami Studios; artist John Hairston Jr. of All City Studios, whose work has been featured at DeLurk Gallery; the folks behind the quirky local self-published “Sgt. Sasquatch” comics; and more.

“We have gone back to our roots with this move, by being 90 percent vintage and new comic book dealers,” Lusk said, “We downsized for the spring event, but plan on growing again in the future.”

In making the move to a new space, he has decided to put panel discussions on hold this time around, but will be bringing them back for the fall show, which he plans to hold at Benton in September.

Cosplay contests and a cosplay parade will be part of this weekend’s event, with cash and prizes in multiple categories. There will also be hourly door prizes.

Lusk said he hopes to surpass the 2,000 mark in paid attendees this time around, not counting the kids who will get in free to the show, so he expects more than 2,500 people to attend the convention.

Twin City Comic Con comes April 8 and will be held in the grand ballroom of the Millennium Center, 101 West Fifth St., from 10 a.m. to 5 p.m. This one is organized by Bret Parks, the owner of Ssalefish Comics, which has locations in the Silas Creek Crossing shopping center and in Greensboro.

Parks said he decided to start the convention after hearing from customers who wanted more opportunities to get together and share their passion for comics. “I listen to them when they tell me what books they like and don’t like, and what they want,” he said. “Based on all the activity we have in our store, it’s very evident that Winston-Salem is ready to celebrate comic books in a fun way outside of the stores.”

Valiant Comics, a publisher that is a sponsor of the convention, is releasing a new title “Shadowman,” a revival of a popular 1990s character. The first 400 paid admissions to the con will get an exclusive limited-run copy of “Shadowman No. 1” with a variant cover by Giarrusso.

Other events will include a cosplay contest with cash prizes; giveaways including door prizes every half-hour; and a live DJ.

Admission is $10, and kids 12 and under get in free. For more information, go to www.ssalefish.net/twcc. Proceeds from each ticket sale will go to Comics For Kids, a program that will be donating new comic books to kids in Title I schools across the Triad.

Though the two conventions are going after the same audience, Parks said he doesn’t think of it as a rivalry.

“If you’re a comic book fan, Winston-Salem is the best city to be in the next few weeks,” he said. “It’s not about picking a side or picking a team, you can go to both.”

And if those two conventions aren’t enough comic book goodness for you, mark your calendar: On August 3 to 5, the Wizard World Comic Con, a national convention with celebrity guests, is scheduled to come to the Benton Convention Center.

The hit Broadway show “Wicked” is onstage through Oct. 24 at the Steven Tanger Center for the Performing Arts, 300 N. Elm St. in Greensboro.

A fan dressed as Optimus Prime at a ComicCon booth with comics and figurines. 20180329w_rel_cover

ComicCon booth with comics and figurines.

Shadowman #1, an exclusive variant cover that will be given to the first 400 paid attendees at the Twin City Comic Con.

Cosplayers dressed as Deadpool at the Winston-Salem ComicCon in 2016. photo by Tim Clodfelter

A cosplayer dressed as Groot from “Guardians of the Galaxy” at Winston-Salem ComicCon in 2016.