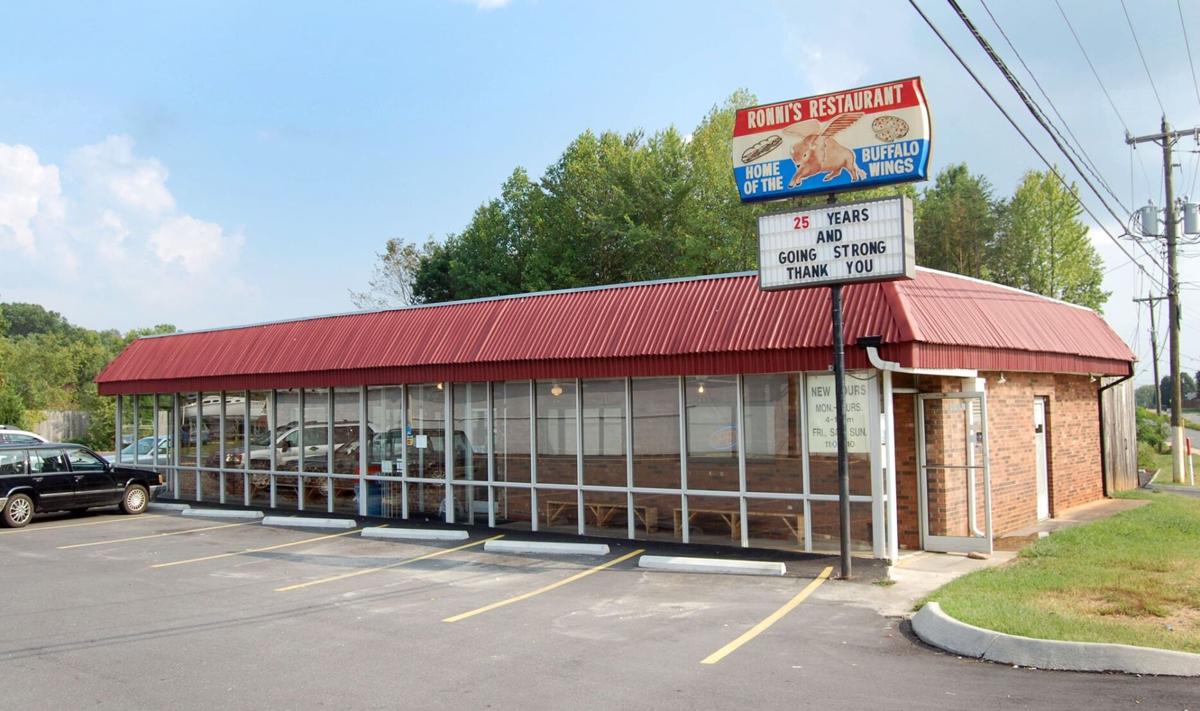 Ronni's opened on a mostly deserted stretch of Lewisville-Clemmons Road in 1982. The road is now filled with fast-food and sit-down restaurants. 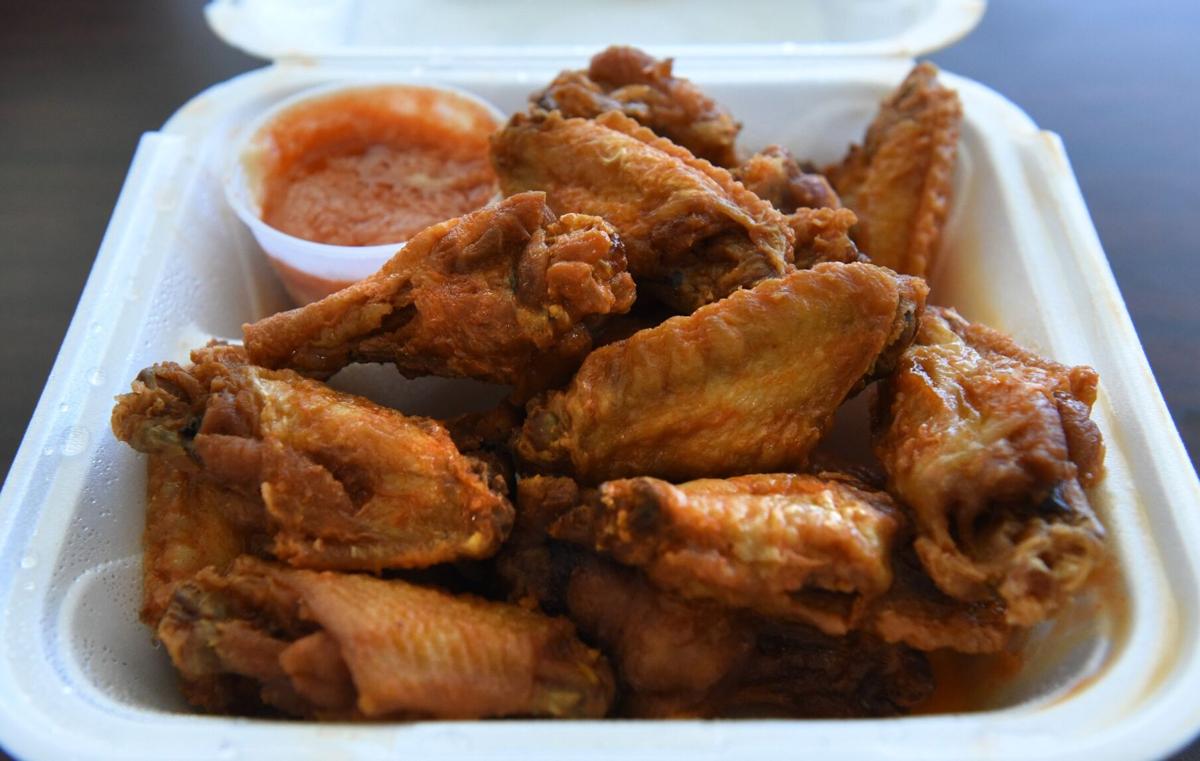 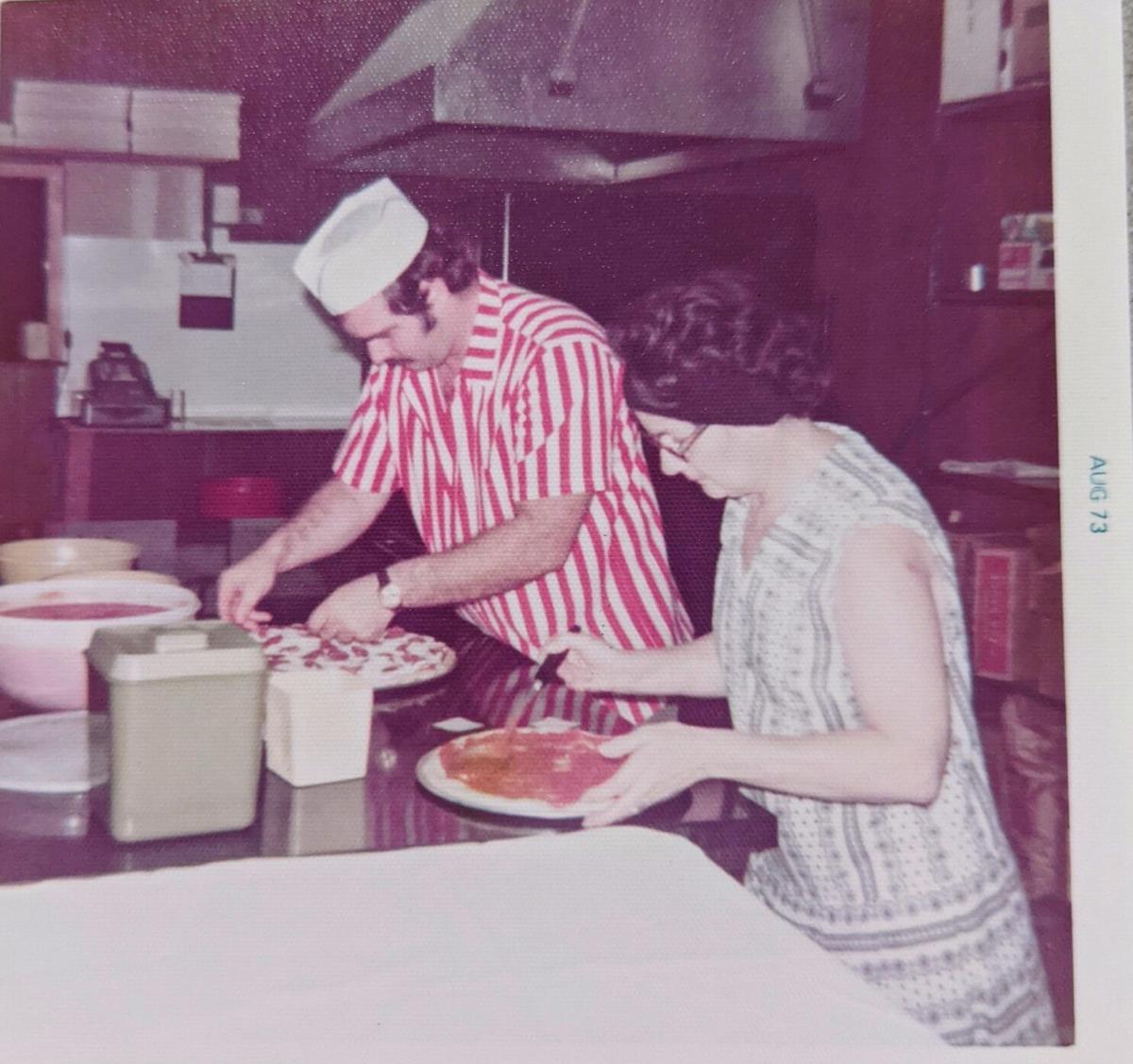 Gilles Rainville and his mother, Lucette Rainville, making pizzas at the first Ronni's in East Aurora, N.Y. in 1973. 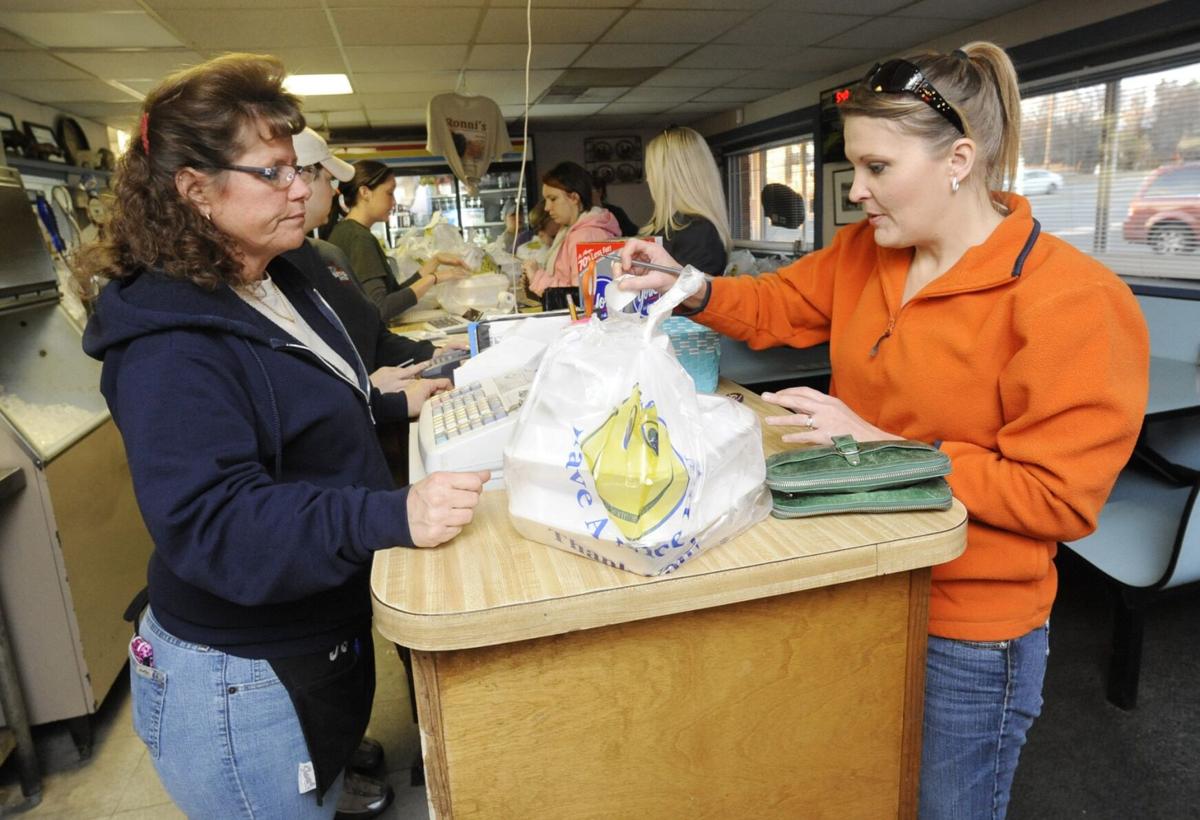 Julie Brandon waits on Amy Hobson at the checkout register during the "Super Bowl Rush" at the original Ronni's Restaurant in Clemmons. 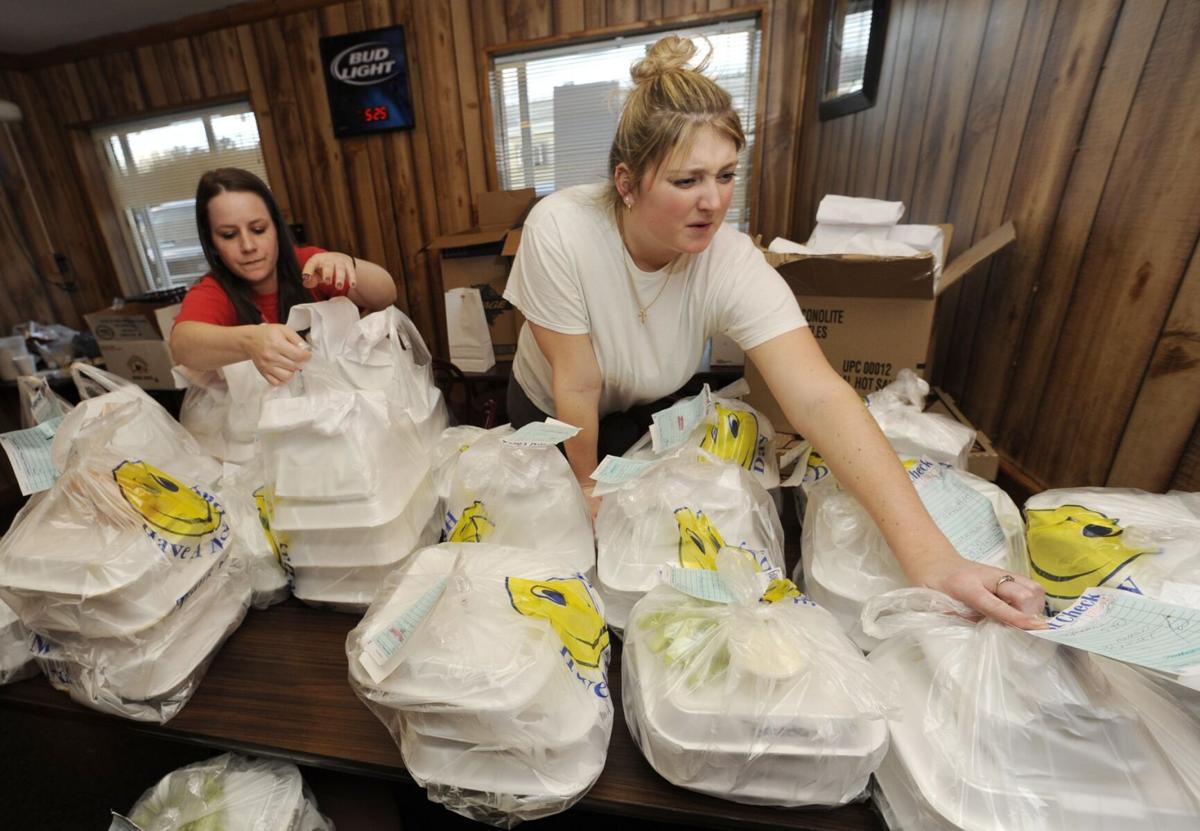 Laura Ogle (left) and Erika Proctor look for orders on during the "Super Bowl Rush" at Ronni's in 2013.

Gilles Rainville, who founded Ronni’s in 1982, died at 79, just 16 days after the death of Veronica Rainville, his wife of 59 years.

“The cancer had been spreading for about the last five years,” said his daughter Renee Rainville-Nouchi. “But he kept fighting because of my mom.”

Rainville brought his family to North Carolina from Buffalo, N.Y., almost 40 years ago.

Buffalo wings are an American staple now, but back in 1982, they were a novelty in North Carolina.

With Rainville’s help, though, Buffalo chicken wings caught on quick. At one point, Rainville had four restaurants in the area.

That Ronni’s – named after Veronica Rainville – ever wound up in North Carolina was a stroke of luck.

Gilles Rainville was born April 19, 1942, in Waterloo, Ontario, Canada. His father moved the family to Buffalo, N.Y., in 1959 when he got a job at a Ford Motor Co. plant. In Buffalo, Rainville met and married Veronica Kelly, started a family and got into the restaurant business. He had several restaurants there that featured the soon-to-be-famous spicy chicken wings before he got tired of Buffalo’s long, cold winters.

In the early 1980s, Rainville decided to move his family to a warmer climate. His initial plan was to settle in Texas, but then fate intervened.

The Rainvilles had enjoyed vacations on the N.C. coast and were passing through Winston-Salem when they happened to visit a restaurant in Clemmons.

“We literally stopped there for lunch,” daughter Colette Whitney said. “We were staying at Tanglewood, because we had a big trailer. They were serving frozen pizzas there, and my father was like, ‘Why are they serving frozen pizzas?’ and so he went to talk to the owner. And he came back saying he made an offer right there and then.”

It seemed like a rash move, and the family was worried.

“My mom freaked out because then Clemmons was in the middle of the country,” Rainville-Nouchi said. “Nobody knew what wings were. People would say things like, ‘I didn’t know Buffalos had wings.’ But my dad had faith.”

“He was just very determined,” Whitney said. “No one thought we would make any money here. But he kept saying this area was going to build. And he was right.”

It wasn’t too long before Ronni’s became a household name, not only in Clemmons, but also in Winston-Salem.

“I remember when someone from Garner Foods came in because they couldn’t understand why we were ordering so much Texas Pete,” Rainville-Nouchi said. “My dad showed them what he was doing, and how he made his wings, and for a while they put his wings recipe on the back of their big bottle.”

Though the restaurant continues to sell pizza and sandwiches, it is known mainly for its wings. Ronni’s popularity prompted Rainville to open restaurants in Kernersville, Mount Airy and Winston-Salem, all with different partners.

In 2000, Rainville found out he had prostate cancer. By 2005, he also had colon cancer. At that point, he started closing his other restaurants to concentrate on the Clemmons location, and to slowly step away from the day-to-day operations.

“The colon cancer was kept at bay for about 10 years,” Rainville-Nouchi said. “But then it spread and it got in his lungs.”

Rainville-Nouchi has been the general manager and co-owner of Ronni’s for the past few years. She runs the restaurant with her husband, Warren Nouchi, and managers Julie Brandon and Julie Taddeucci.

The restaurant will continue, she said, after a one-day closing June 7 in honor of her father.

Rainville-Nouchi said that her father was always a hard-working man who, first and foremost, took care of his family. He also loved hockey, crime novels and family trips to the beach.

“He could be kind of gruff. He didn’t take any mess. But once you got to know him, he was like a teddy bear,” Rainville-Nouchi said.

“He was very disciplined,” said his son-in-law Bruce Whitney. “I remember one day his son Mark showed up for work at the restaurant one minute late – just one minute. And Gill sent him home for the day.”

“But he also was super generous,” Rainville-Nouchi said. “In his office I found a shoebox full of donation receipts. He gave to all these places—The Nature Conservancy, UNICEF, Wounded Warriors, lots of Catholic charities.”

He also was devoted to his wife, who died at age 78 on May 13, just nine weeks after learning she had esophageal cancer. “It was very fast,” Colette Whitney said. “We all expected Dad to go before Mom because he had cancer for so long. But he fought to be here for her.”

A memorial service will be held for Rainville at 11 a.m. June 7 at St. Leo’s Catholic Church in Winston-Salem. In lieu of flowers, the family requests that donations be to Trellis Supportive Care of Winston-Salem.

Curry and Noodle is now open in Robinhood Village shopping center, serving a mix of Indian, Thai and Nepalese dishes.

Ronni's opened on a mostly deserted stretch of Lewisville-Clemmons Road in 1982. The road is now filled with fast-food and sit-down restaurants.

Gilles Rainville and his mother, Lucette Rainville, making pizzas at the first Ronni's in East Aurora, N.Y. in 1973.

Julie Brandon waits on Amy Hobson at the checkout register during the "Super Bowl Rush" at the original Ronni's Restaurant in Clemmons.

Laura Ogle (left) and Erika Proctor look for orders on during the "Super Bowl Rush" at Ronni's in 2013.