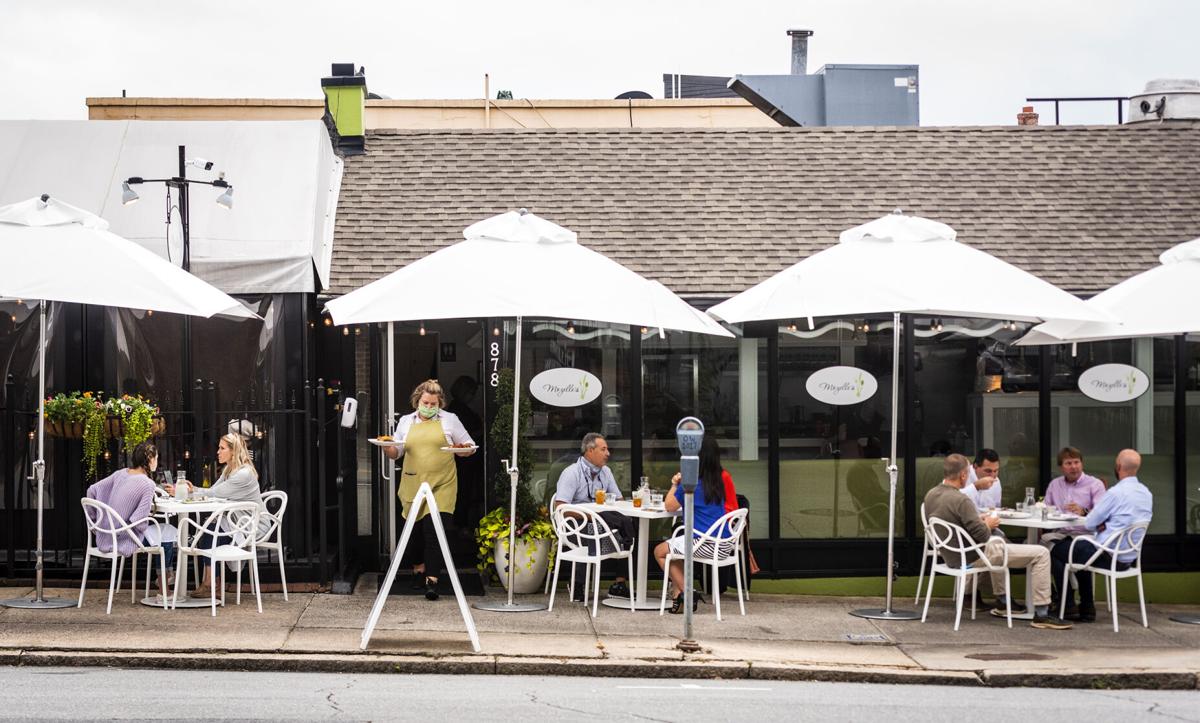 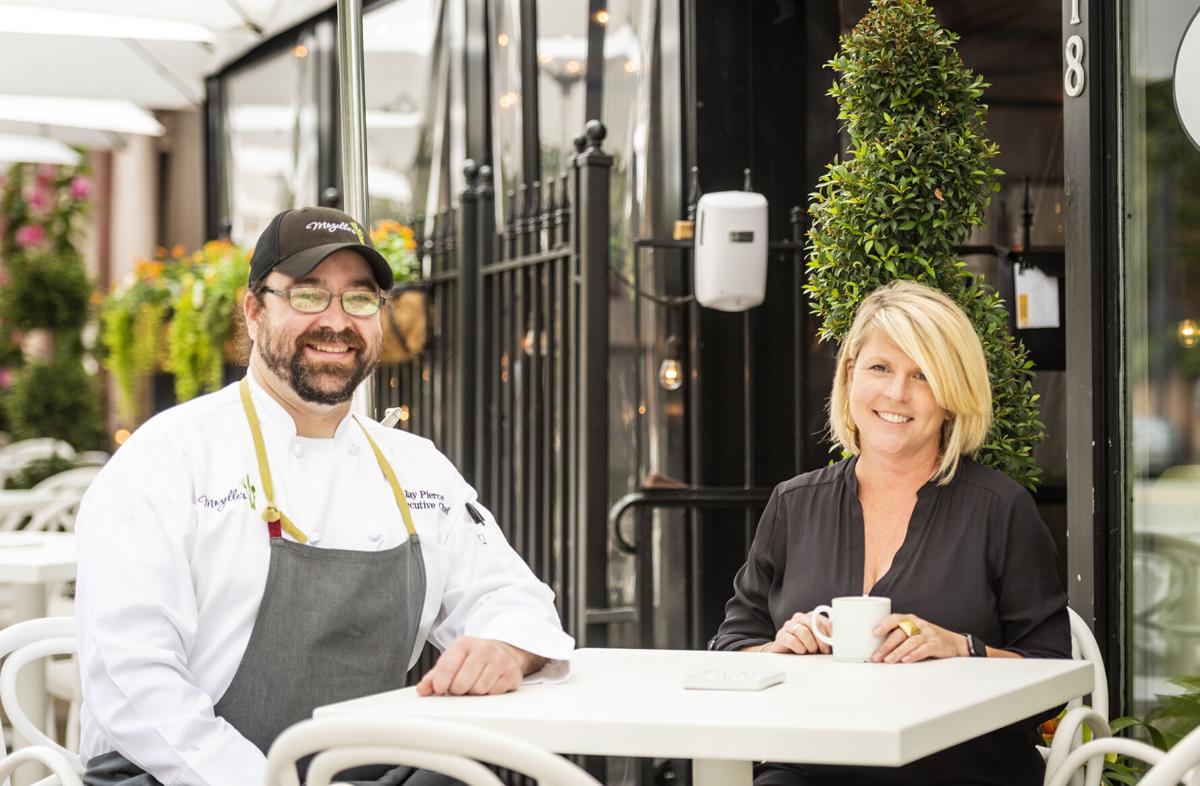 Mozelle's executive chef Jay Pierce (left) and owner Jennifer Smith sit for a portrait in front of the restaurant. 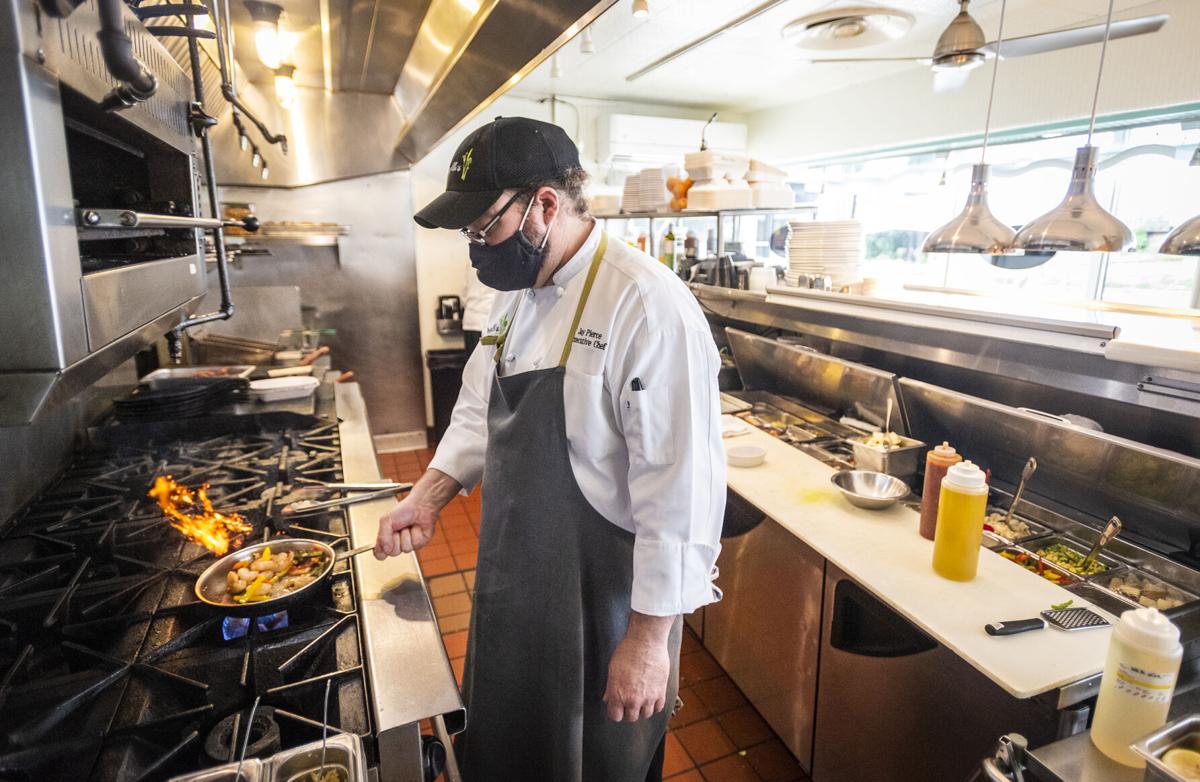 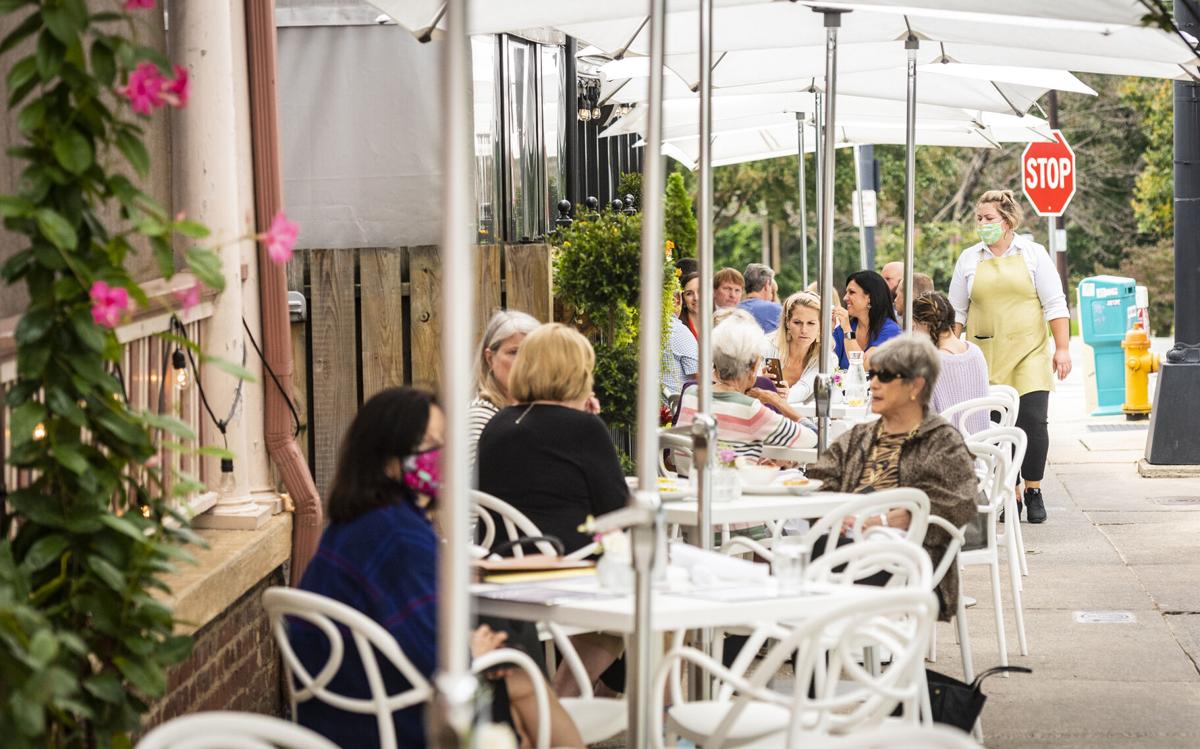 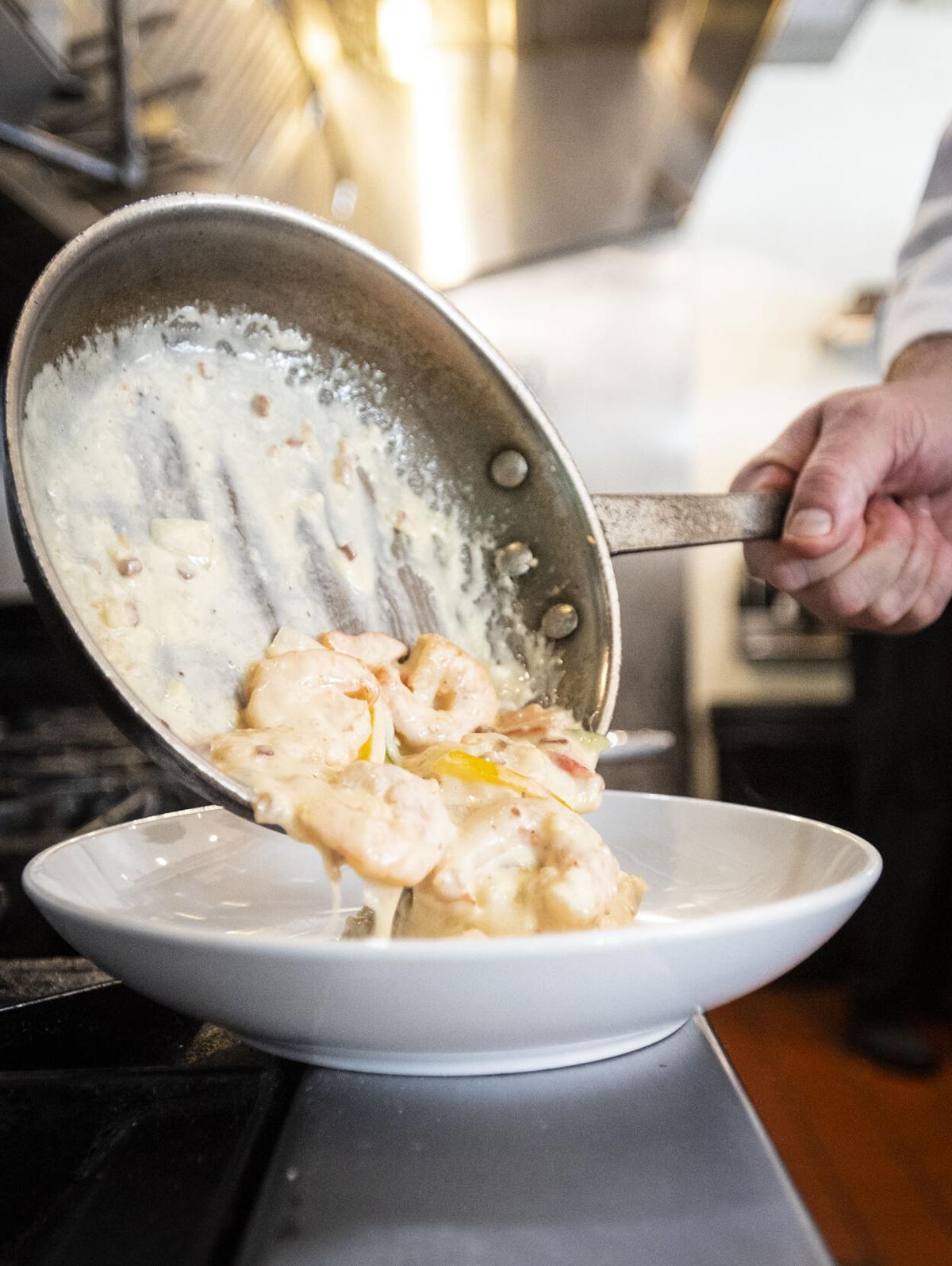 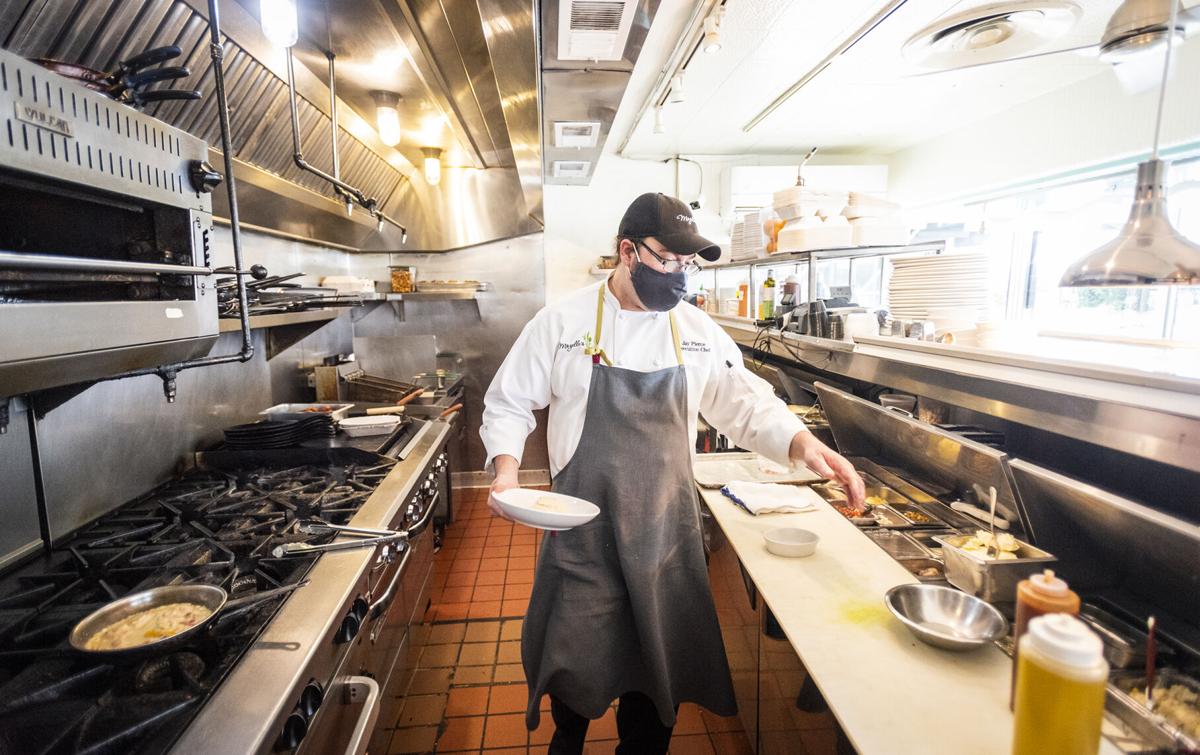 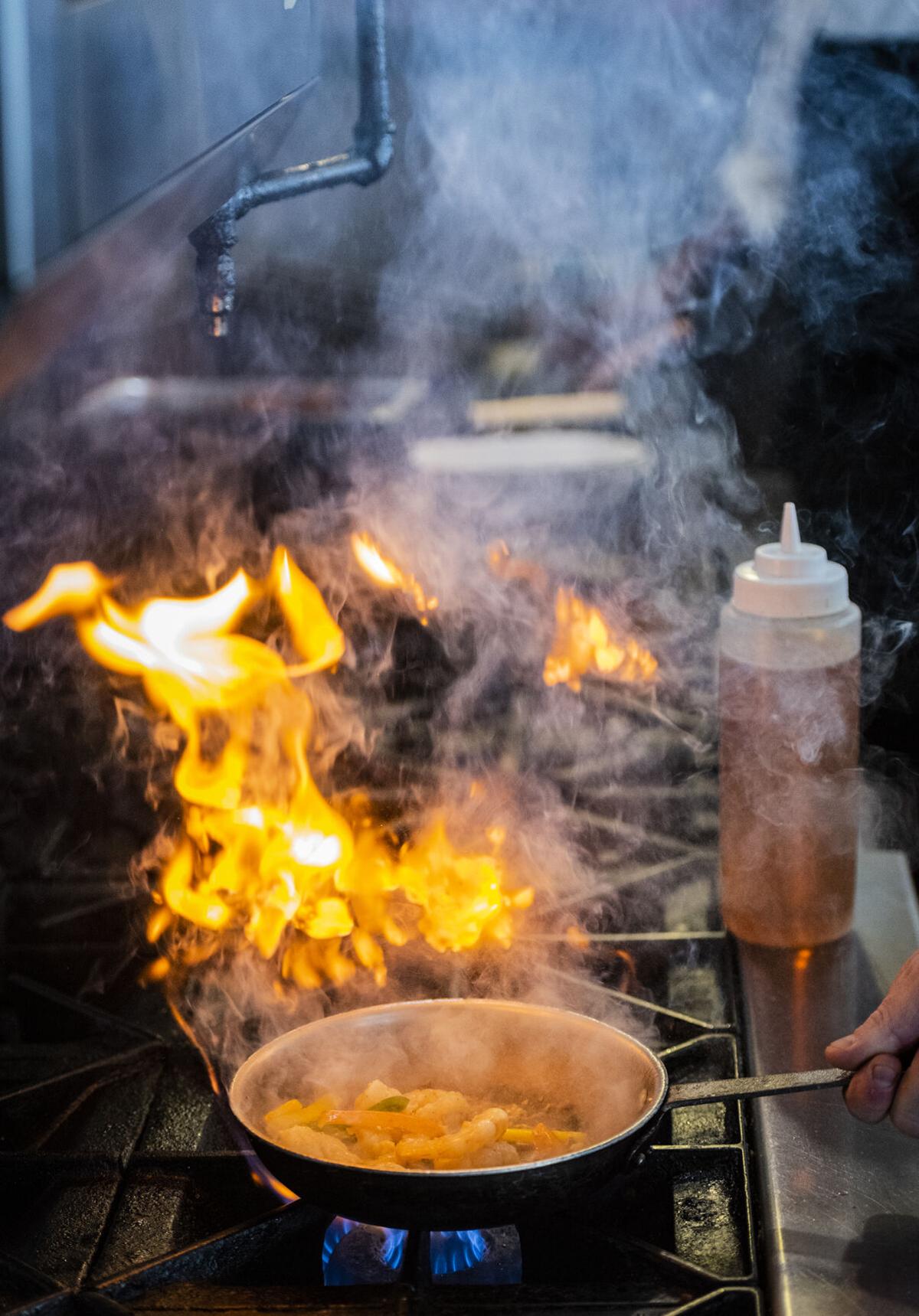 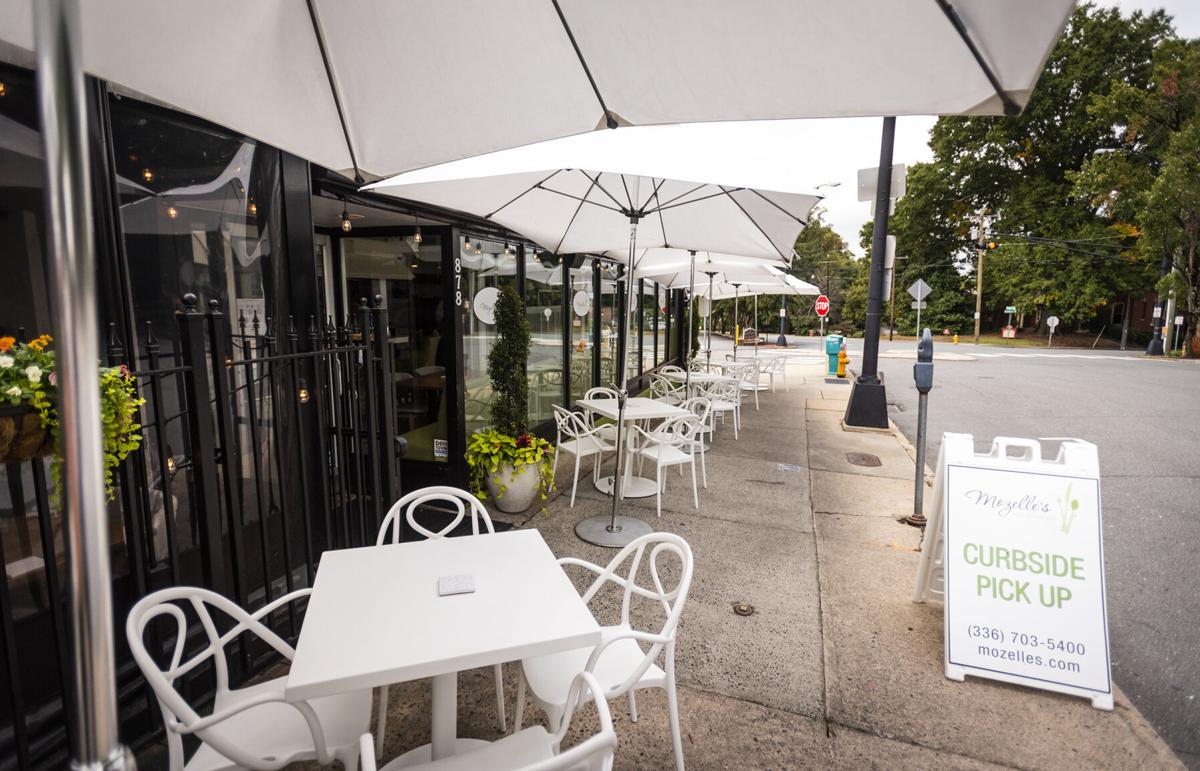 Mozelle's has expanded their outdoor dining options since the onset of the pandemic. 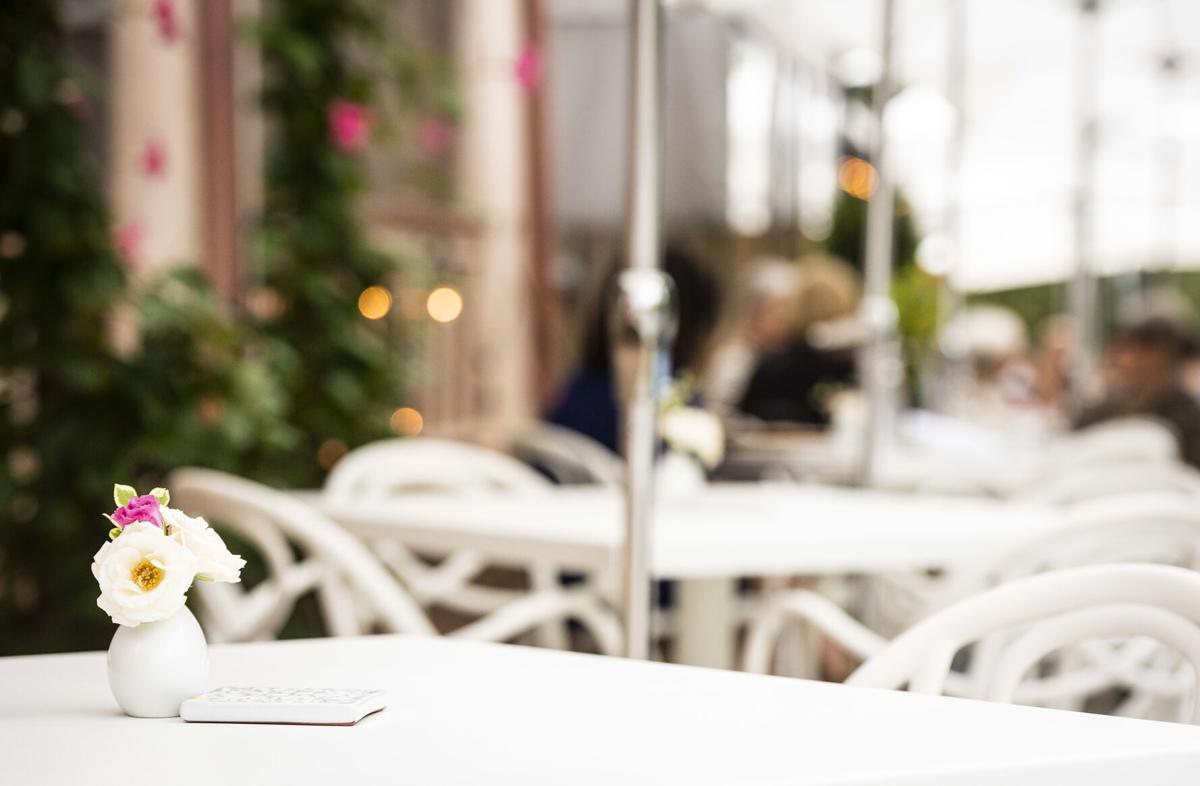 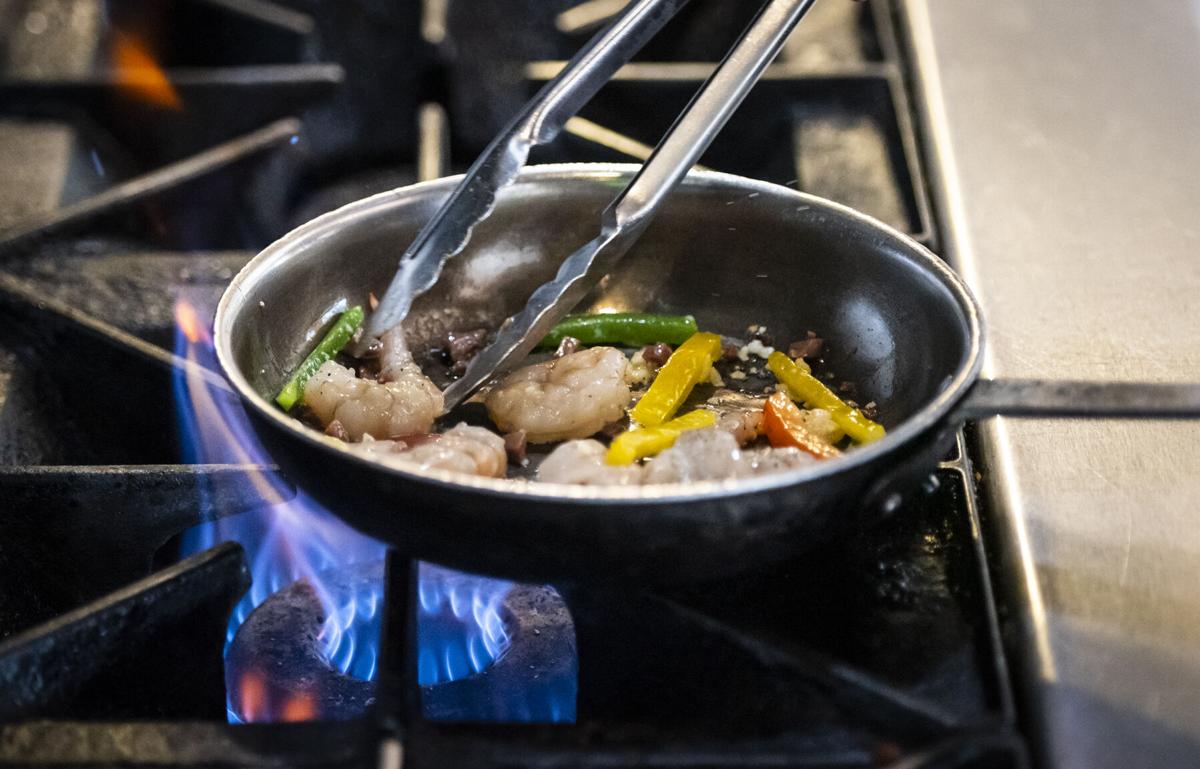 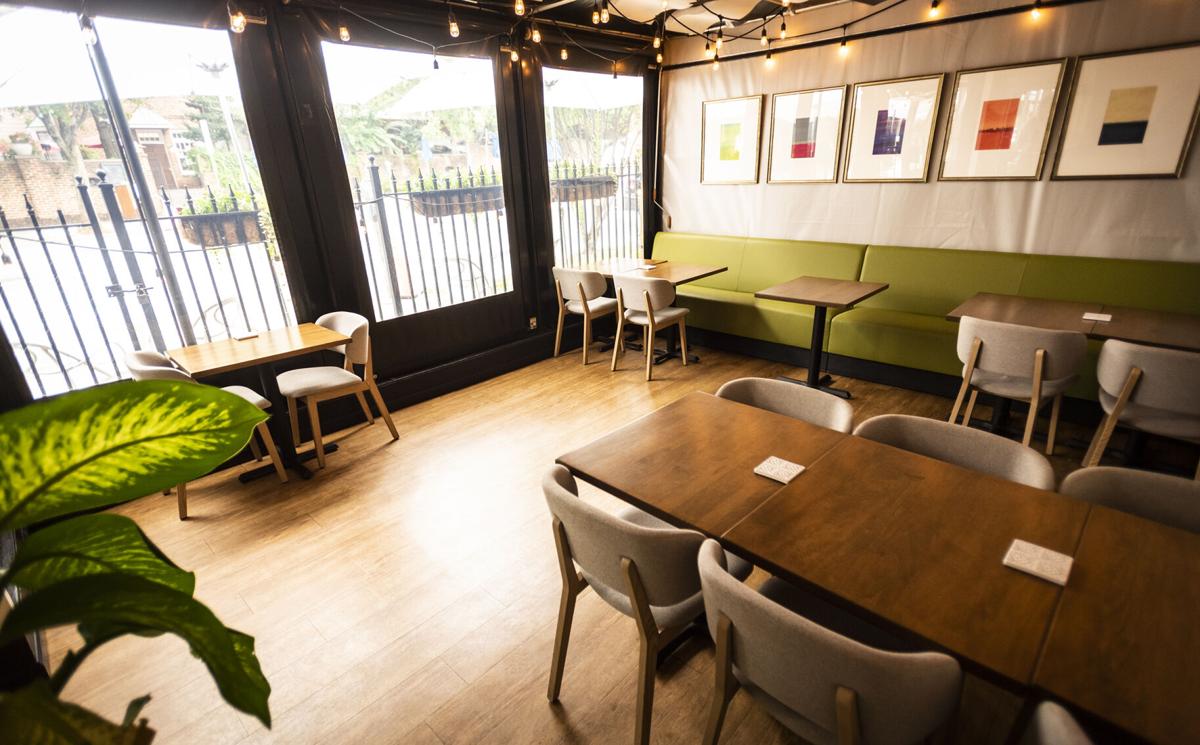 One of the socially distanced dining rooms at Mozelle's 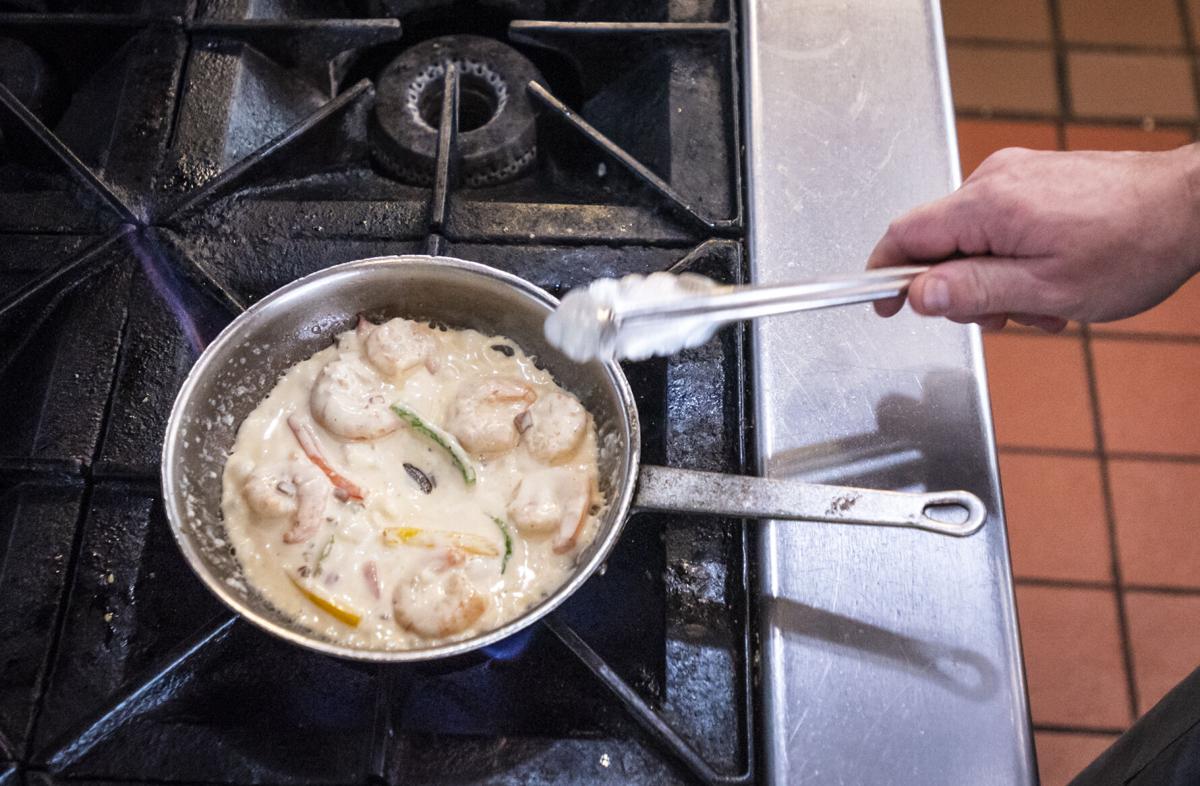 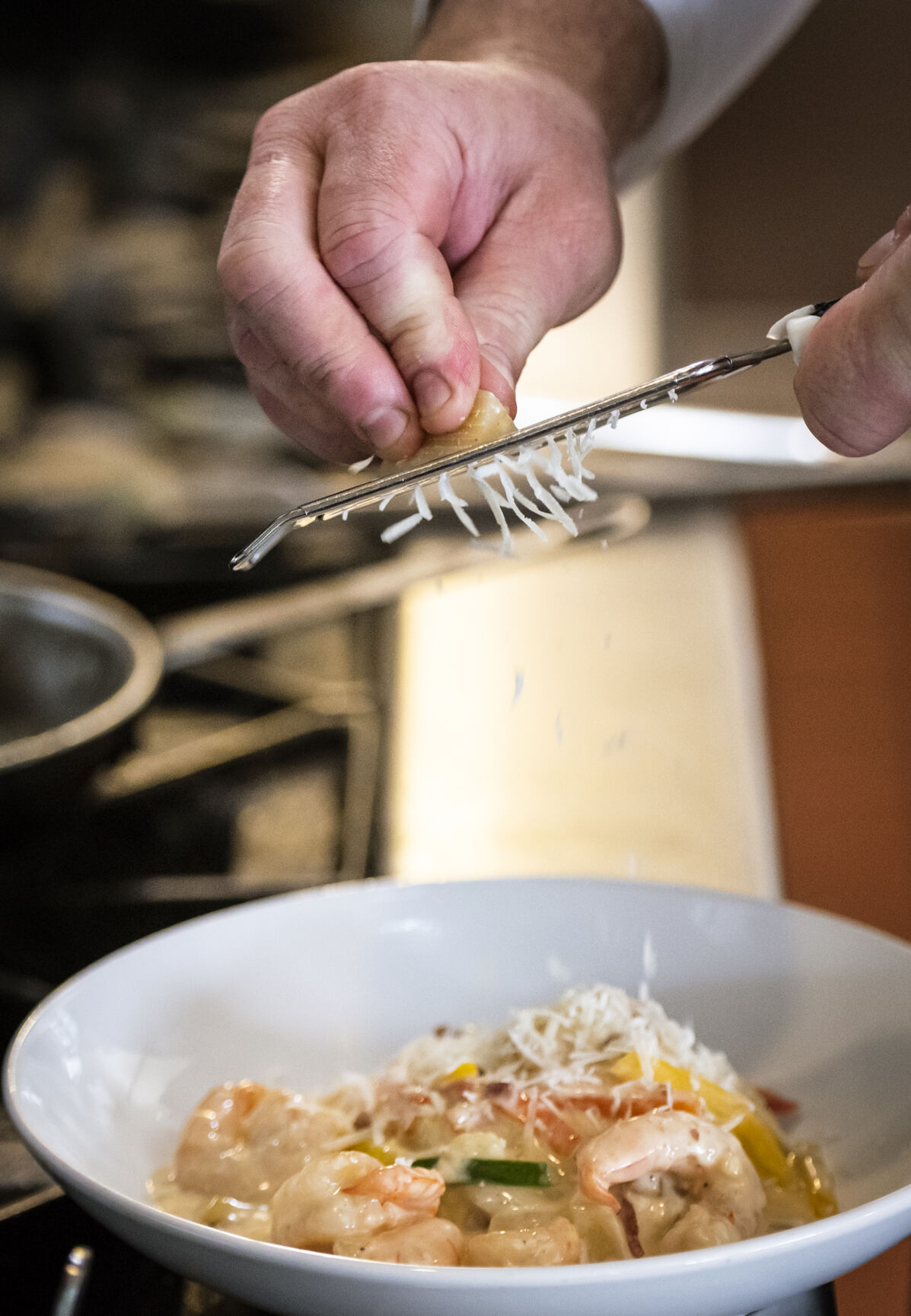 As the coronavirus pandemic stretches into its third season of 2020 and threatens to stretch into 2021, restaurants continue to struggle with how to make money with restrictions on capacity and a general skittishness on the part of consumers.

But as the months have rolled by and governments, business people and the public have gotten a handle on strategies for reducing the spread of COVID-19, some restaurateurs are figuring out how to survive.

The strategies and the results vary, depending on the type of restaurant. For instance, in most cases business has increased for restaurants with drive-thrus, delivery drivers and a takeout-friendly menu of chicken wings or pizza.

In other cases, a plan for the pandemic can be more complicated and nuanced, partly a result of trial and error. And restaurants overall have seen a significant decrease in business. Some have even closed for good.

One local restaurant that has had success — in surviving if not thriving — is Mozelle’s Fresh Southern Bistro. An established restaurant in a highly visible location in the West End, Mozelle’s is led by owner Jennifer Smith and chef Jay Pierce.

They have taken a relatively cautious approach to operating during the pandemic, but they have kept serving food, week in and week out, since March, all the while tweaking their business plan along the way.

It’s an approach that has allowed them to find what works best in the current climate while still maintaining their core identity.

“When the governor’s order came down, we never closed our doors,” Pierce said. “We just started doing takeout.”

“That kept us in people’s minds,” Smith said. “I feel like we already had a great base of people, but staying open kept them coming.”

That doesn’t mean they didn’t have hiccups. “We tried doing family meals for takeout, like fried chicken and meatloaf (items they normally sell anyway), but they never took off,” Smith said. “We’re doing a lot more takeout than we did before, but it’s still not a lot.”

Smith said that a federal PPV loan was important in keeping the doors open during Phase One. But Smith and Pierce didn’t rely on government help alone.

In those first two months of takeout only, Mozelle’s installed a new POS (point of sale) ordering system that allowed them to offer online ordering. “That was a gamechanger,” Pierce said. “People were able to find us easier.”

They also took advantage of the city’s offer to designate two parking spaces for curbside pickup to make it easy for customers to get in and out.

Most people would call Mozelle’s one of the nicer restaurants in town, yet it’s not quite fancy or what you would call fine dining. And that has worked in its favor. Fine-dining, white-tablecloth restaurants seem to be some of the worst-hit restaurants this year, partly because they are expensive and partly because part of their appeal is the dining-room experience.

Mozelle’s isn’t cheap but it isn’t high-end, either — currently, dinner entrees range from $14 to $22. But it does have a cozy atmosphere, a nice wine list and good service. Much of the food is best served immediately, not after a 20-minute car ride. In short, it’s the kind of place where you want to eat in the dining room.

“We serve comfort food, but it’s elevated comfort food,” Pierce said. In addition to fried chicken and meatloaf, Mozelle’s is known for its tomato pie, collards, and shrimp and grits.

When Phase Two began in late May, Mozelle’s didn’t open its dining room right away. Instead it offered outdoor seating for the first couple of weeks.

Smith bought new patio furniture and big umbrellas for shade. She bought plants and planters for atmosphere. “We treat the outside like an extension of our dining room." Smith said.

Mozelle's also extended its patio seating in front of the building next door, which Smith had previously bought with an eye to expansion or a new business. The result is that it now has about 40 seats outside — about the same seating as it had indoors before the pandemic.

Interestingly, customers asked Smith to open the dining room — they missed the full Mozelle’s experience — so the restaurant reopened the dining room in early June. “We didn’t want to turn away business, so we came up with a sanitation plan,” Pierce said.

The inside — now seating about 24 people — has been renovated with new banquettes and chairs and refinished tables.

In short, Mozelle’s looks more inviting than ever — a subtle but perhaps not insignificant influence on people debating whether or not to eat out.

Mozelle’s also has been managing expenses. “We have a leaner wine list. We have a smaller inventory,” Pierce said.

Though Pierce said that “it takes 90 percent of the staff to do 70% percent of the business,” he and Smith have trimmed expenses by closing on Mondays — a move they also called a morale booster. “At least we have one day when we don’t have to be checking our phones for work,” Pierce said.

Mozelle’s now opens a half-hour later and closes an hour earlier. Smith and Pierce also decided to stay open between lunch and dinner hours. “People are eating at different times now. They want to beat the rush,” Smith said.

Smith and Pierce also have tweaked the menu. They haven’t added any foods that you wouldn’t expect them to serve, but in general they have trimmed the menu, to reduce food waste and costs, and to reflect what people are buying. During Phase One, they eliminated many of the seafood entrees and a filet – expensive items that didn’t travel well in a takeout container.

They brought back some dishes with Phase Two, but in general they stuck with their core menu, their best-sellers. “No one has been buying specials,” Smith said, referring to the daily, often creative menu add-ons that historically are very popular at nice restaurants.

“We stripped it down to the classic dishes,” Pierce said. “We stuck to the things we did best, and it served us well. We just eliminated everything that didn’t sell well.”

Smith and Pierce can boast today that they can pay their bills, even if business is only 65% or 70% of what it was this time last year.

Not any one of these changes has “saved” Mozelle’s. But the sum total of small tweaks has kept this business afloat. Mozelle’s celebrated its 12th anniversary last month.

Smith and Pierce still worry as they scrape by with thin margins. “We live in perpetual fear of people going somewhere else,” Pierce said. “If we overcook the food or get an order wrong and somebody complains on social media, that could really hurt us.”

Before the pandemic, Smith and Pierce had lined up some projects — including use of the building next door — that aren’t happening anytime soon.

“It hasn’t been perfect,” Smith said, “but I feel like we kept our spirit and our brand.”

Customers are coming. Cooks and servers have jobs. Bills are getting paid.

“I think our restaurant is here to stay,” Pierce said. “We do comfort food. I don’t have to explain collard greens to anybody. I think luxury will return. But right now when you are under siege, you find refuge in comfort food.”

Or as Smith put it, failure is not an option. “We’re going to get through this. There’s not a choice. This is my life.”

Mozelle's executive chef Jay Pierce (left) and owner Jennifer Smith sit for a portrait in front of the restaurant.

Mozelle's has expanded their outdoor dining options since the onset of the pandemic.

One of the socially distanced dining rooms at Mozelle's