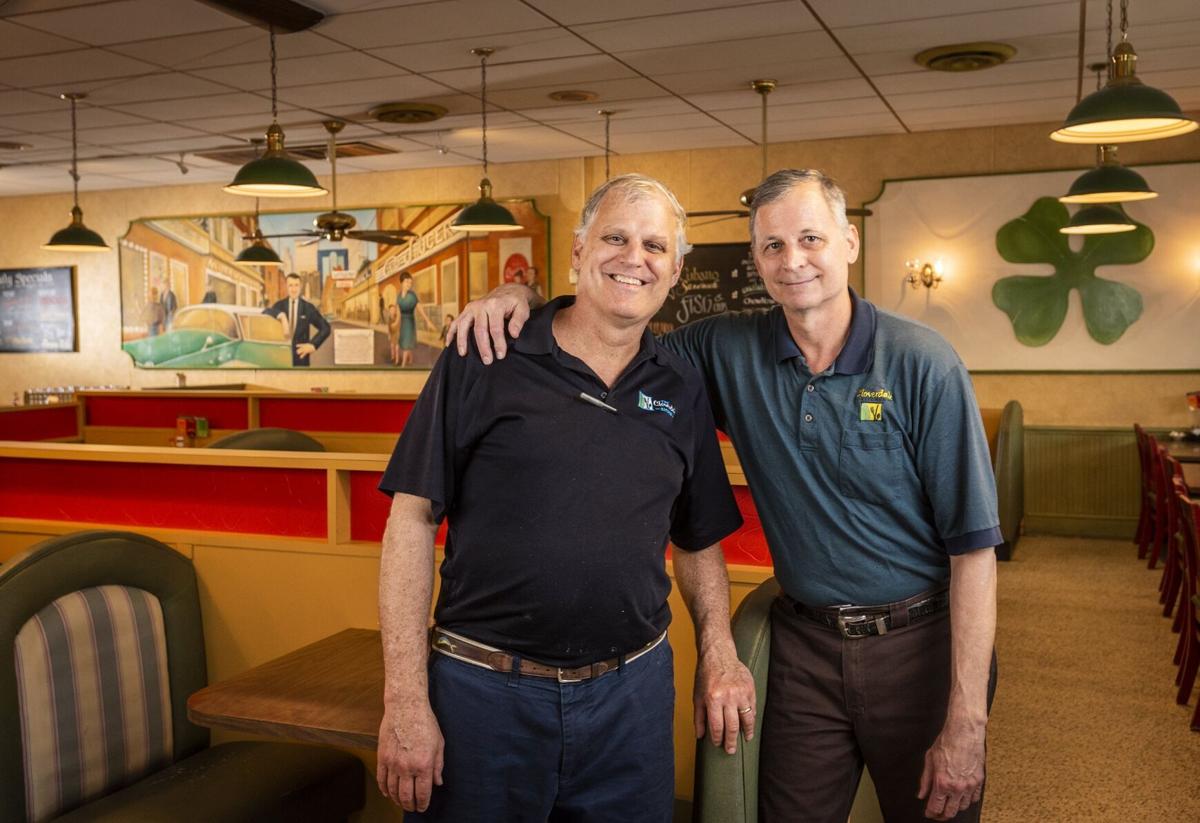 Dino, left, and Johnny Cortesis, owners of Cloverdale Kitchen, stand for a portrait in their restaurant on Tuesday in Winston-Salem. 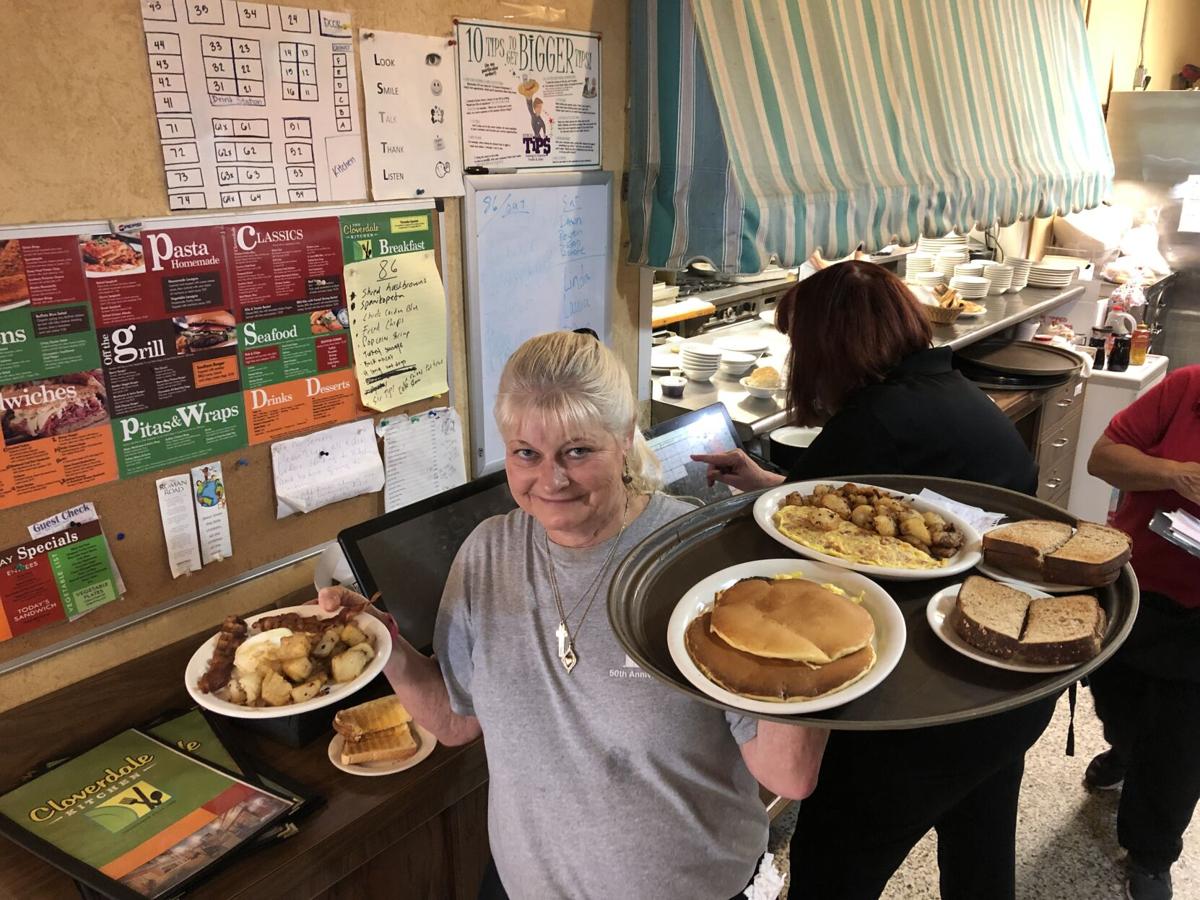 Linda Bowman carries a breakfast order to a table Friday at Cloverdale Kitchen. 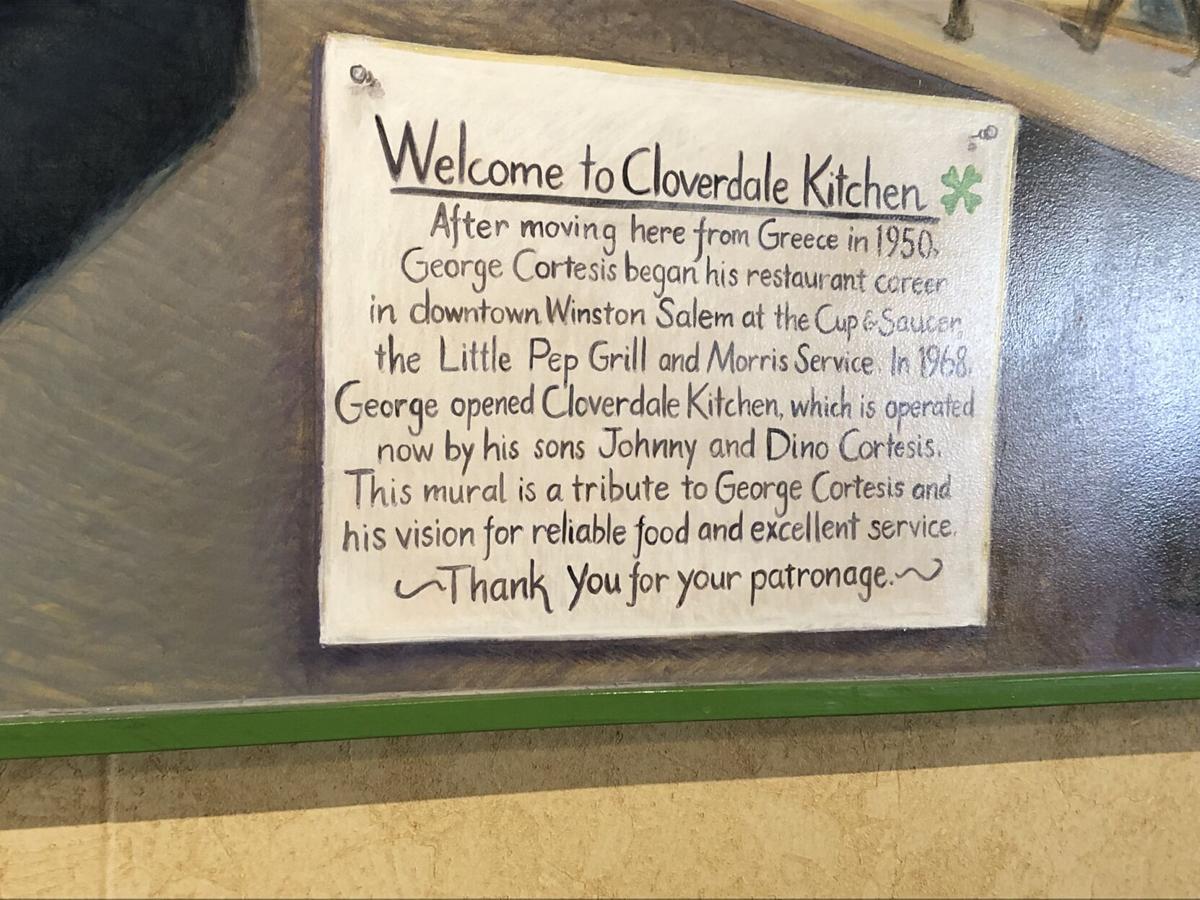 A caption on the mural at Cloverdale Kitchen. 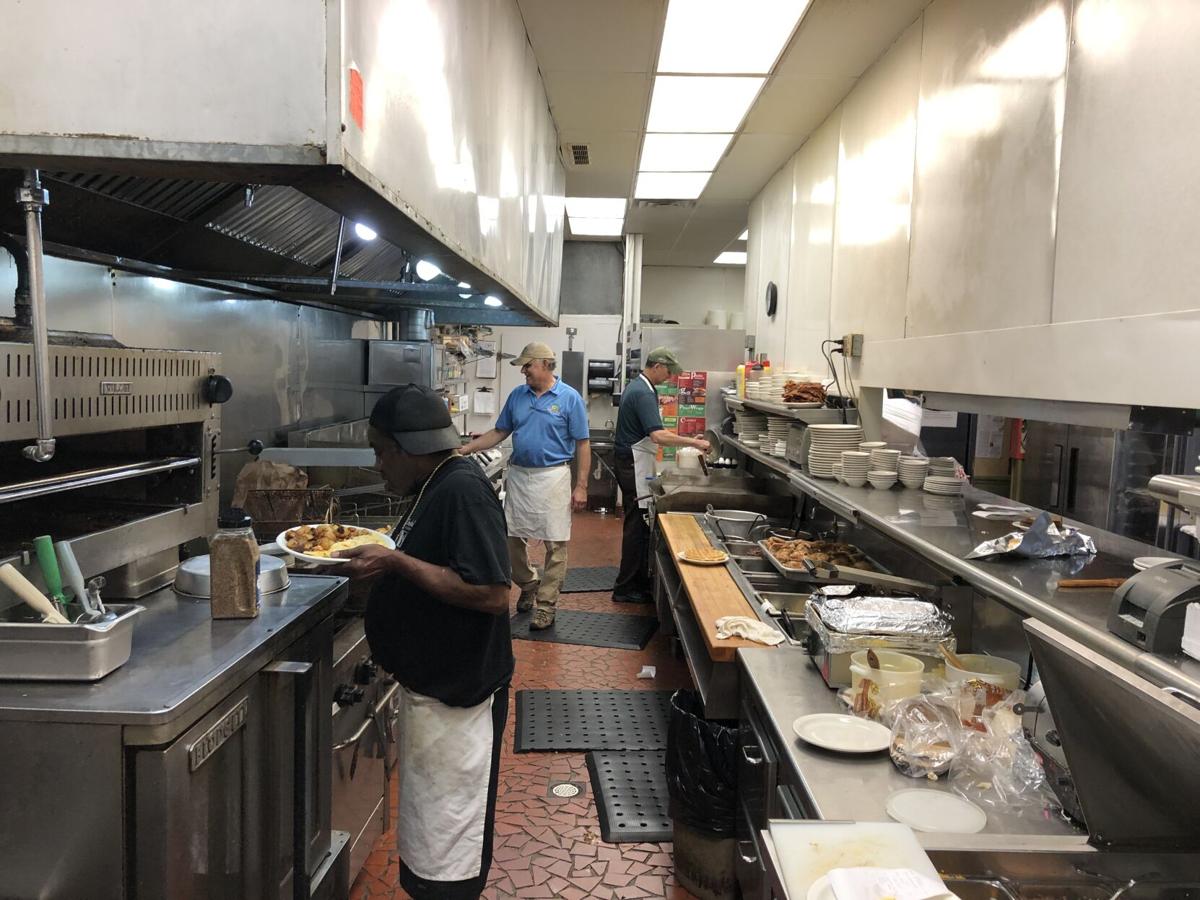 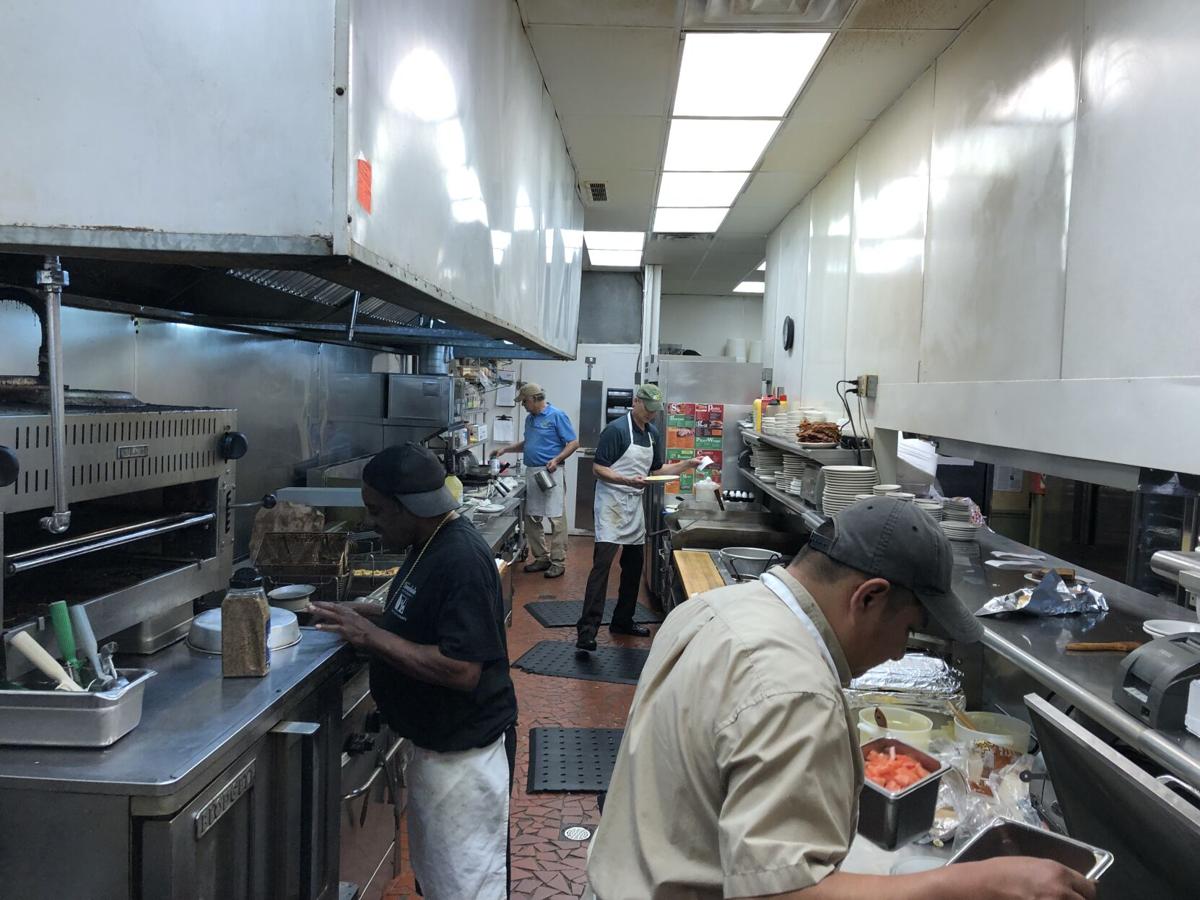 Curtis Murphy (from left), Dino Cortesis, Johnny Cortesis and Esteban Yannis in the kitchen at Cloverdale Kitchen on Friday. 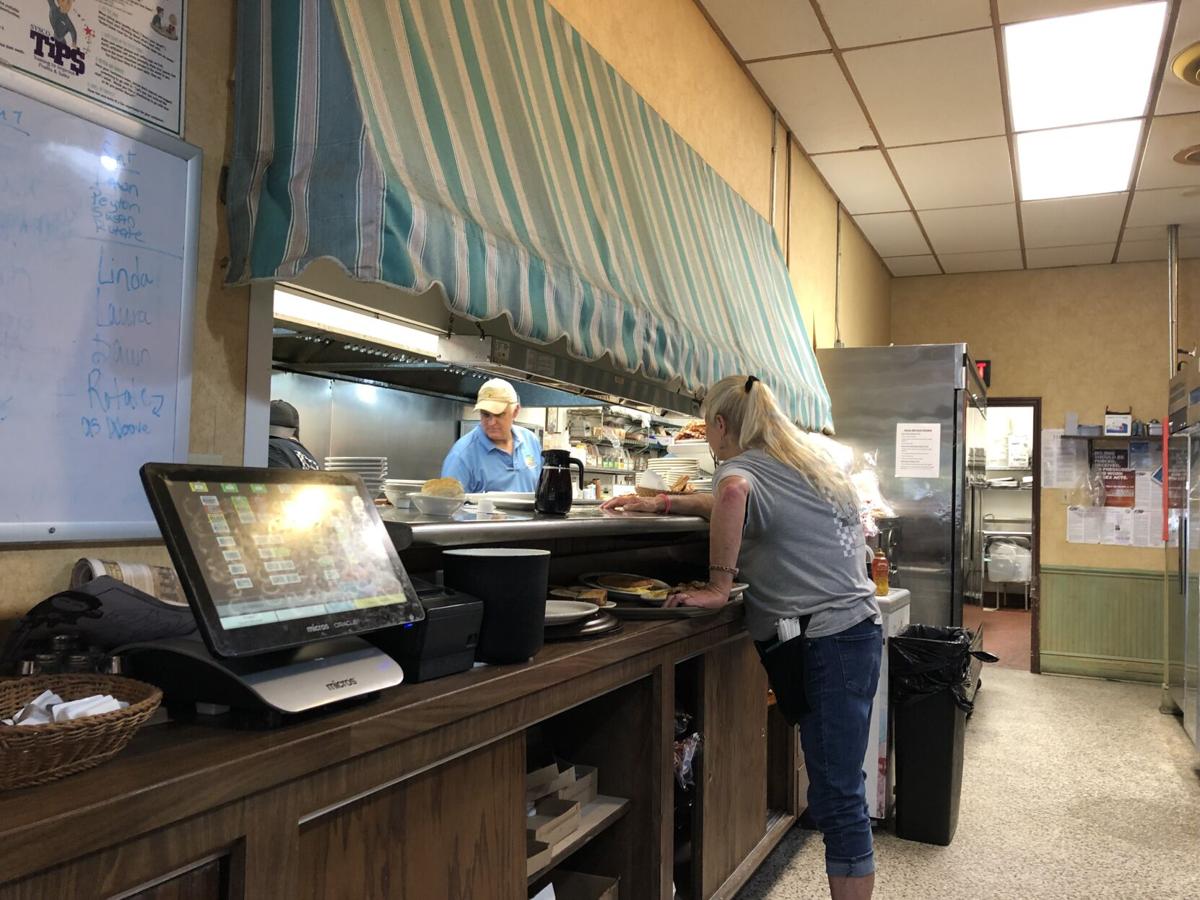 Linda Bowman waits for Dino Cortesis to finish her order at Cloverdale Kitchen on Friday. 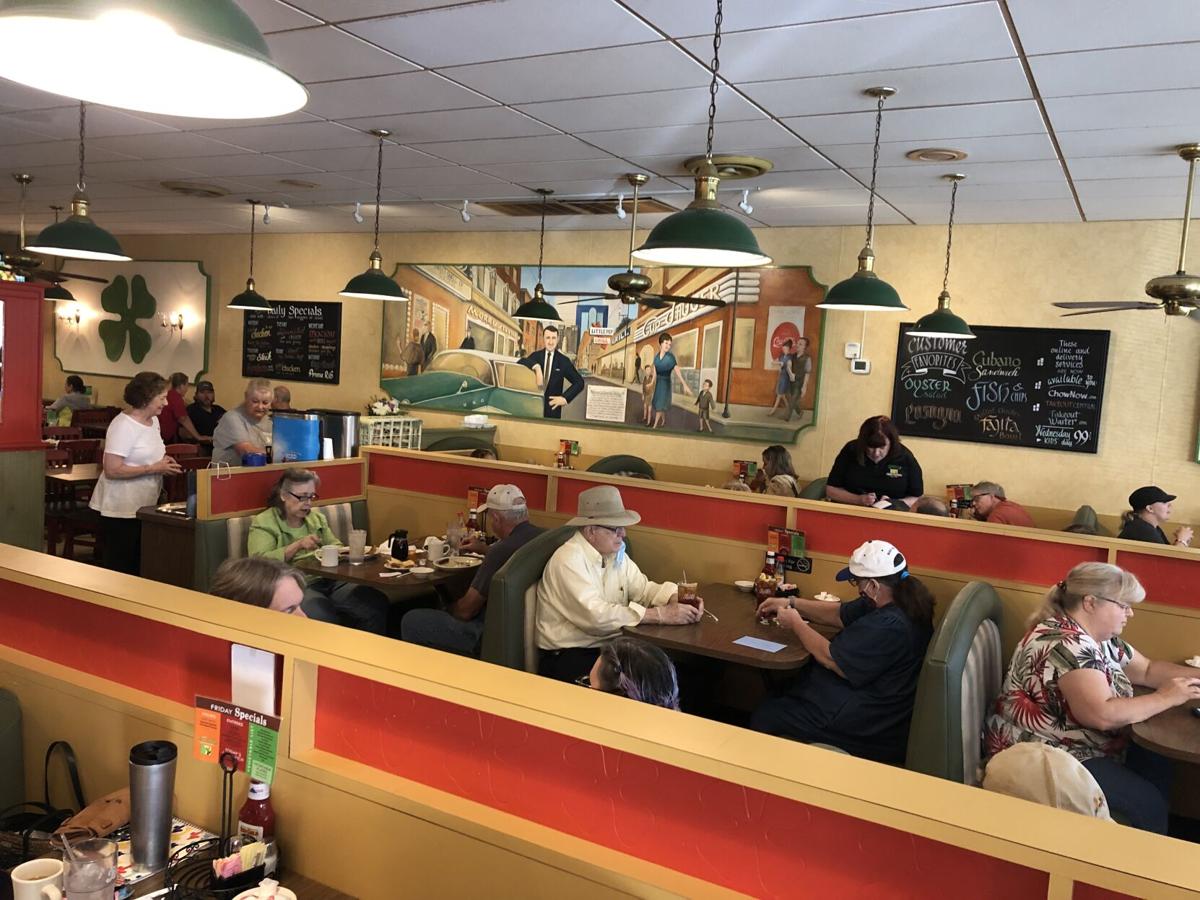 A steady stream of loyal customers gave Cloverdale Kitchen a fond farewell on Friday as the restaurant served its pancakes, omelets, spaghetti and more for the last time.

Owners Dino and Johnny Cortesis decided to close the diner their father, George, co-founded back in 1968.

“This has been a great location,” Dino Cortesis said. “Ardmore is right here, and you have thousands of people that work right there at the hospital.”

“We probably should have moved years ago and gotten our own building. Every year our rent (went) up, and we were paying more rent than any of the mom-and-pops,” Johnny Cortesis said.

Despite the restaurant’s long run, business had been flat.

“Even before COVID, it was getting hard,” Dino Cortesis said. “A few years ago, we started closing the restaurant at 3 p.m. And senior citizens were our customer base and we were losing them.”

The brothers said that for better or worse, they stuck with the breakfast-anytime diner concept that their father started with in 1968.

“We kind of got ourselves in a box. All around us, other restaurants were evolving, but we stayed the same,” Johnny Cortesis said. “We added a few things, but most of the menu is the same. These are even the original floors. These are the original tables, the original counter.”

“Paul found out about this new shopping center they were building on Cloverdale Hill. This was just when things were starting to expand beyond downtown. And he talked my father into coming out here,” Dino Cortesis said.

Cloverdale Kitchen was one of the first tenants in the new Cloverdale Shopping Center. Rogatsios soon left to start King Kitchen in King, and new partners Angelo Cortessis and Gus Ballas joined George Cortesis. Those three ran the restaurant until 1985, when Cortessis retired and Ballas left to start another restaurant.

That’s when George Cortesis called his sons to into the business. It was a somewhat ironic twist, as Cortesis had worked hard to send his sons to college so they wouldn’t have to work in restaurants.

“We had never worked here as teenagers, so we didn’t know anything about the business,” Johnny Cortesis said. “My dad didn’t know if we could handle it.”

The father and two brothers ended up working together for 10 years.

It was rough at first, Dino said. “We saw a side of our dad that we never knew before, but we all learned to get along.”

“I remember one time,” Johnny Cortesis said. “We had a big argument, and he took off his apron, threw it on the ground and walked out. I thought, ‘This is crazy. What do we do now?’ Then a few minutes later, he walked back in, put the apron back on and went back to work.”

When George Cortesis retired in 1995, the two sons continued to run it themselves. George Cortesis passed away just three years later, after suffering injuries in a car accident.

“How many times have you heard about two brothers being in business for 34 years without killing each other? We survived that. We survived COVID. We survived a lot of things,” Johnny Cortesis said.

Along the way, they made a lot of friends and loyal customers.

“These are immigrants who came here and were hard-working and made a success of it,” said Georgia Olympio, who was eating breakfast at Cloverdale on Friday with her husband, Mike.

“There were a lot of deals done at these tables over the years,” said David Warf, a longtime customer. “It was like a Winston-Salem Cheers. It’s going to be missed.”

“We ate breakfast and dinner here. We have for years,” said Carroll Haire. “When we retired, it became our kitchen.”

Andrea and Rob Eastman-Mullins, who have been coming here for about 20 years, said they have fond memories of bringing their children here when they were young. “(Actress) Rosemary Harris used to come in here, and she always stopped to say hi to the kids, and it was really sweet,” Andrea Eastman-Mullins said.

“This is an iconic place in Winston,” said Barry Boyd. “And these places are disappearing, which is sad.”

The Cortesis brothers — Dino is 61 and Johnny is 62 — aren’t ready to retire yet. But they are hanging up their aprons. Johnny already has plans to join a friend’s insulation business. Dino hasn’t decided what he wants to do.

Whatever they do next, they will take with them a lot of memories.

“I’ve been so surprised by the outpouring of love this past week,” Dino Cortesis said. “Customers have become like extended family. It’s been an honor to serve them.”

Johnny Cortesis said, “We had the two best things in the world: great customers and great employees.”

Finnigan's Wake, at 620 N. Trade St. downtown, has decided to close on Sundays because of a staff shortage. It will discontinue its Sunday bru…

When summer brings warm days, I keep our meals light and garden-fresh with a minimum of cooking. Cold soups, abundant salads, tapas and antipa…

Dino, left, and Johnny Cortesis, owners of Cloverdale Kitchen, stand for a portrait in their restaurant on Tuesday in Winston-Salem.

Linda Bowman carries a breakfast order to a table Friday at Cloverdale Kitchen.

A caption on the mural at Cloverdale Kitchen.

Curtis Murphy (from left), Dino Cortesis, Johnny Cortesis and Esteban Yannis in the kitchen at Cloverdale Kitchen on Friday.

Linda Bowman waits for Dino Cortesis to finish her order at Cloverdale Kitchen on Friday.