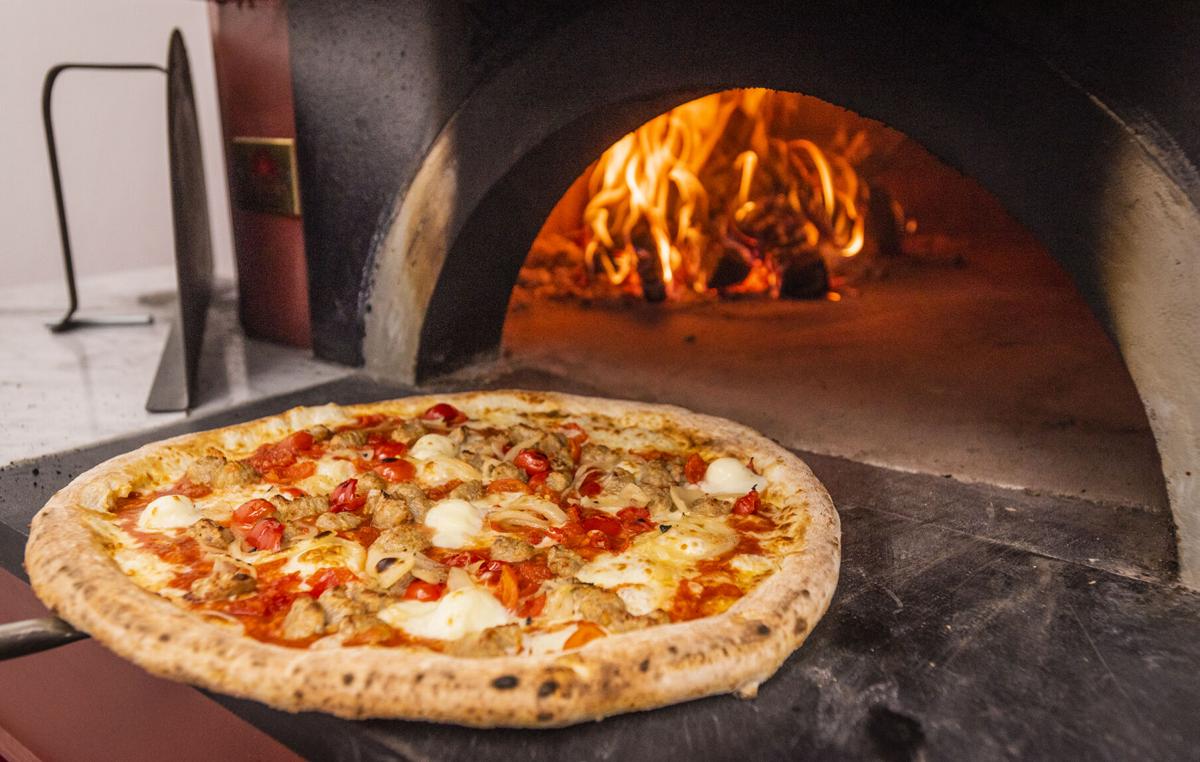 A pizza is removed from one of Cugino Forno's wood-burning ovens after baking. 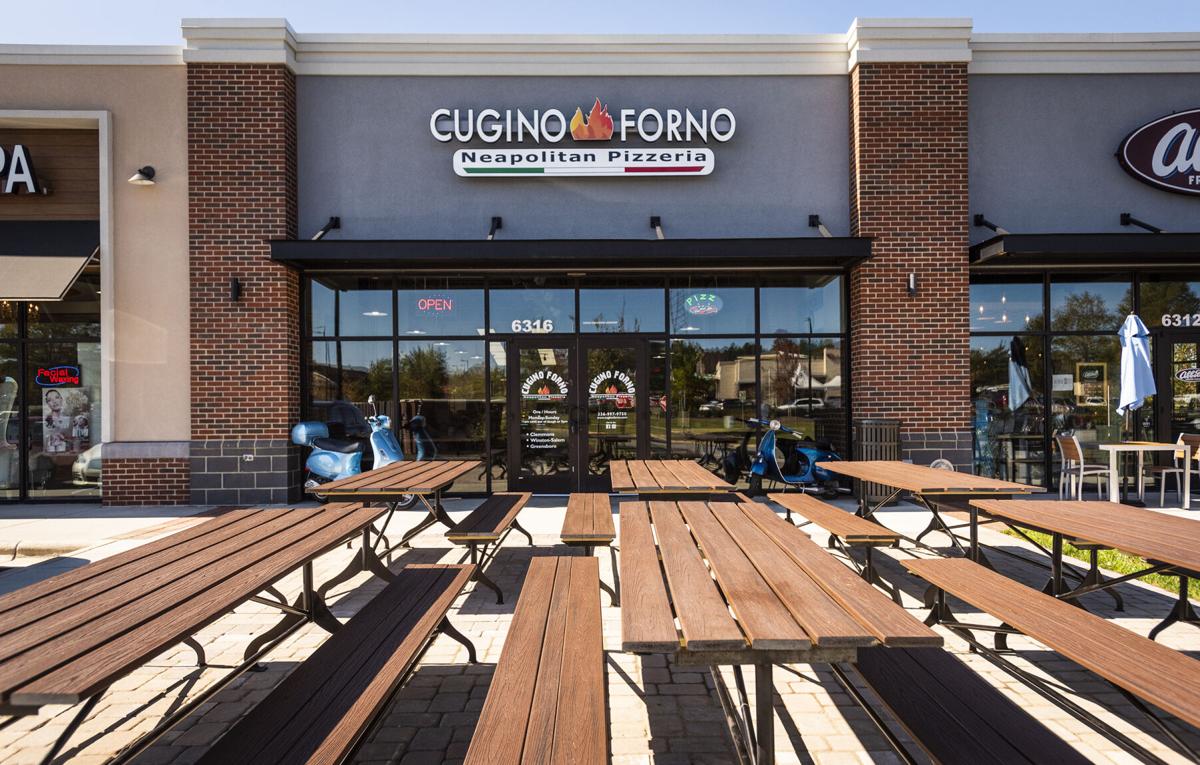 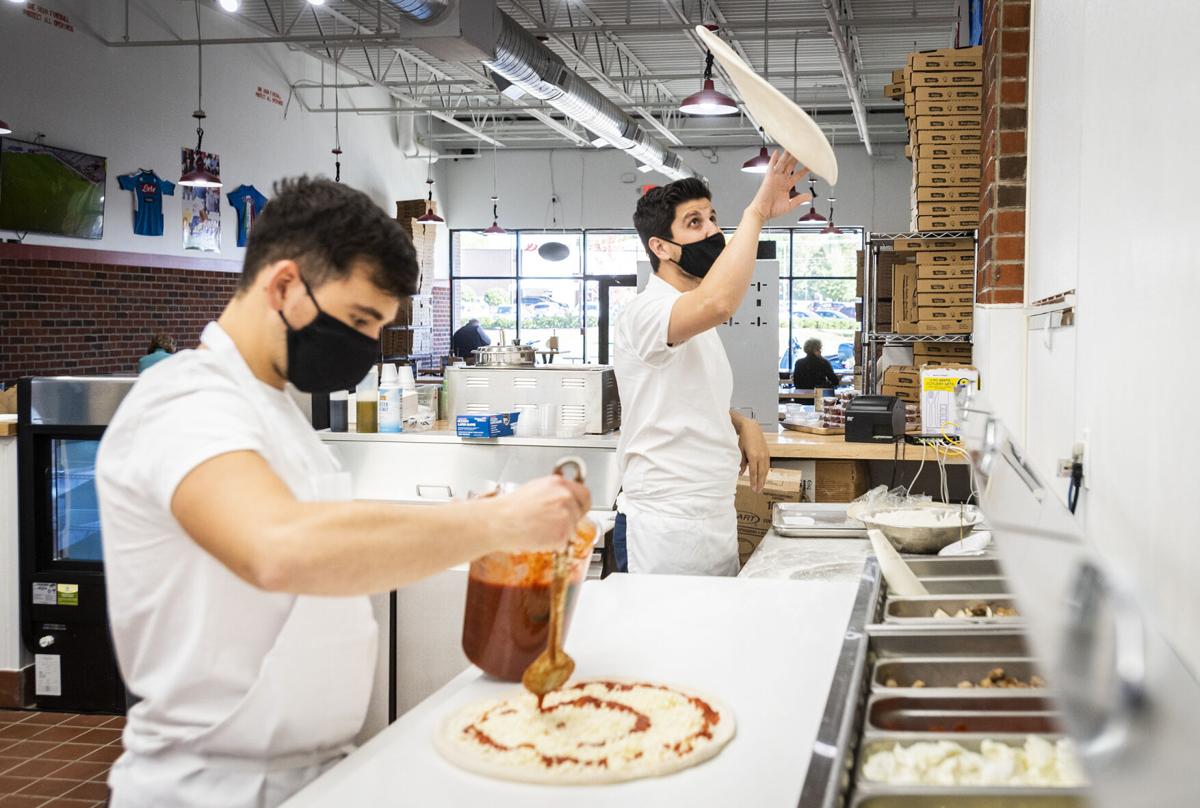 Berkant Ozbey, left, a chef at Cugino Forno, and Joseph Ozbey, one of the co-owners, prepare pizzas. 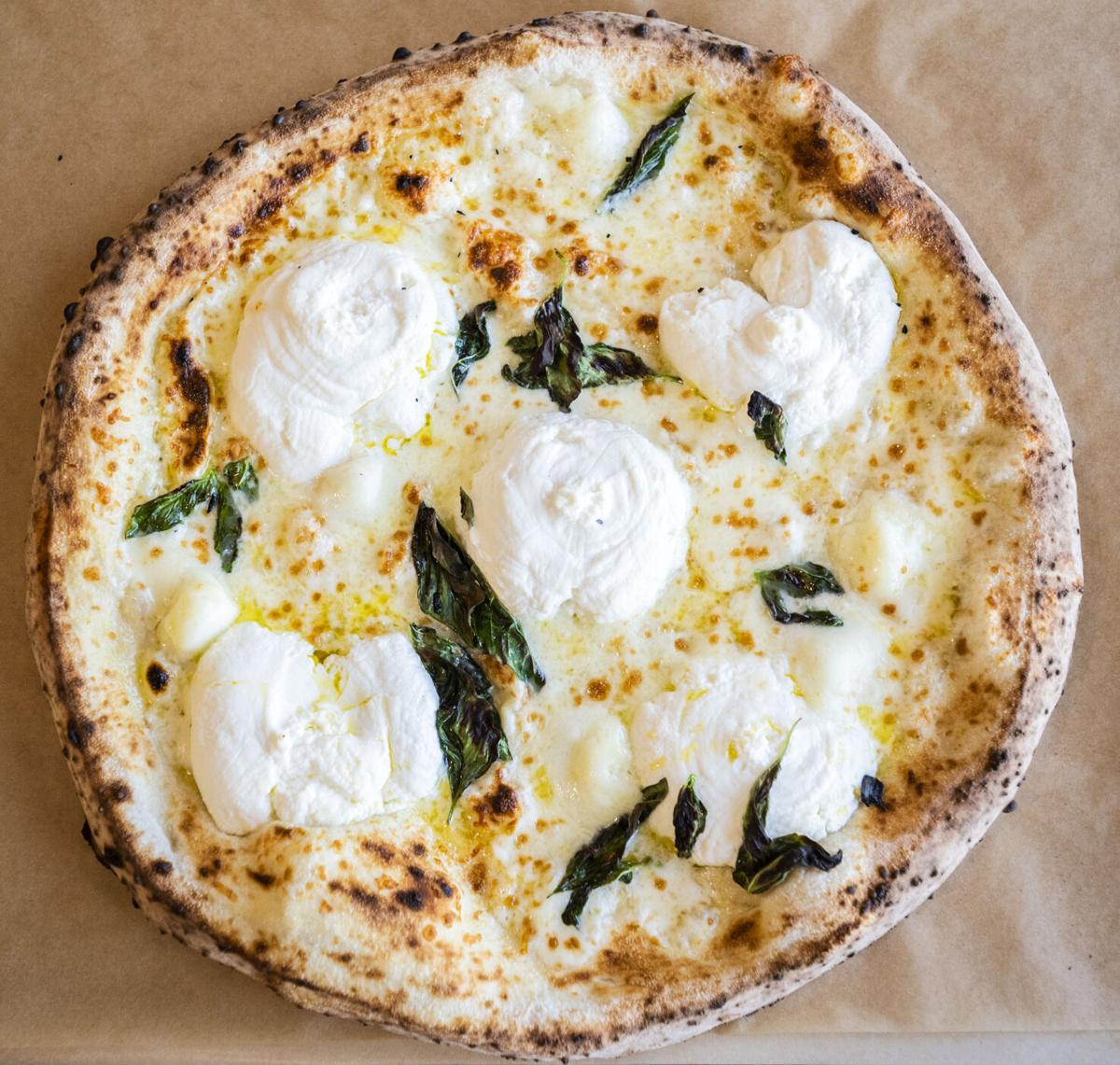 A Bianca pizza at Cugino Forno.

The Clemmons location joins the Cugino Forno at 486 N. Patterson Ave. in downtown Winston-Salem and at 1160 Revolution Mill Drive in Greensboro.

The Clemmons location was set to open in May. The owners had just announced that they signed a lease for the space in late February — about three weeks before the coronavirus pandemic struck and Gov. Cooper placed restrictions on restaurants and other businesses.

“We had planned to open May 1, but then the whole world fell apart,” Ozbey said.

He said that combination of delays involving construction and government permits pushed back the opening even past a revised November date.

The new location, at 3500 square feet, is smaller than either the Greensboro or Winston-Salem locations, but even with COVID-19 guidelines for social distancing, it can still seat up to 100 people inside on its long picnic tables. Though, as a practical matter, the restaurant will seat much fewer people with social distancing, assuming customers eat in smaller groups.

The restaurant has another six picnic tables stationed outside on a patio that eventually will have umbrellas for protection and a fence for privacy.

Cugino Forno has a focused menu: It sells pizza, a few salads, a few desserts and beverages.

The Clemmons location has not yet received its ABC permits, but it plans to offer wine and beer in addition to soft drinks and water. It will have six to eight taps that will offer a mix of Italian and local craft beer, including beers from Incendiary Brewing, Cugino Forno’s next door neighbor in Bailey Power Plant in Winston-Salem.

Pizzas come in one size: 16 inches, They range in price from $16.95 to $21.95. They include the Bianca with ricotta, Buffalo mozzarella and basil and no tomato sauce; the Napoletana with onions, sweet red peppers and Italian sausage; and the Supremo Italiano with pepperoni, sausage and ham.

The three salads on the menu are the Caprese ($7.95) with fresh Buffalo mozzarella, tomato, olive oil and vinegar; Lecce ($6.95), a tossed salad chickpeas, mozzarella, vegetables and ranch dressing; and the Verona ($6.95), with greens, blueberries, blue cheese, honey-glazed pecans and apricot dressing.

The restaurant offers a rotating selection of desserts, including such items as cannoli, carrot cake and fruit tart.

The other locations of Cugino Forno also sell gelato, but Ozbey said he and his partners decided not to sell gelato in Clemmons out of respect for Cugino’s neighbor, Abbott’s Frozen Custard.

But Ozbey said that a lot of people have asked about the gelato.

“I tell them they can go next door and get frozen custard, but they say it’s not the same as gelato, so we’ll see,” he said.

The new restaurant features two prominently displayed wood-fired ovens in the open area so people can watch their food being cooked.

“That’s where the dough is made, so people can see everything we do, and how we keep it clean,” Ozbey said. “Kids like to stand here and watch us make the dough.”

Ozbey said that at the start of the pandemic, business dropped 60% at his other locations, so much so that he considered not opening a third location.

But the partners decided to forge ahead. The partners, family members and staff ended up doing much of the work on the new spot, including the staining and assembly of all the picnic tables, television installations, and dining-room decorations.

Ozbey said that business is still down 30% to 50%, but he has been able to avoid laying off any employees. The new location operates with just four workers most days, with a little part-time help from a couple of high school students on weekends.

“We’re not going to make any money this year, but we’re just trying to stay afloat. The one good thing I can say about this year is I haven’t had to let anyone go,” he said

A pizza is removed from one of Cugino Forno's wood-burning ovens after baking.

Berkant Ozbey, left, a chef at Cugino Forno, and Joseph Ozbey, one of the co-owners, prepare pizzas.

A Bianca pizza at Cugino Forno.