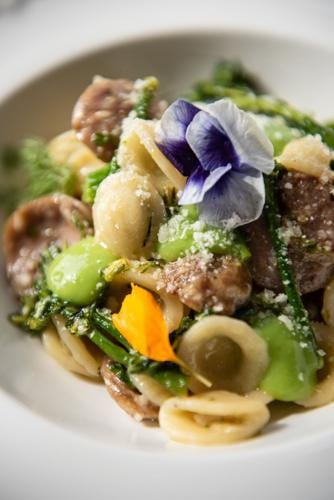 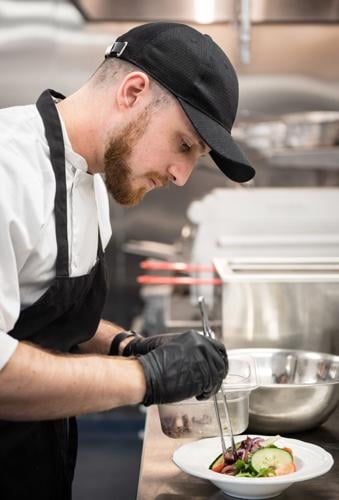 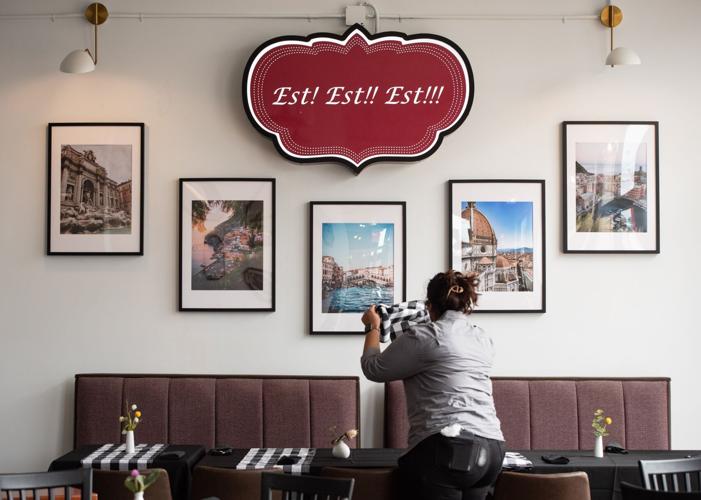 An employee sets up the dining room at Est! Est!! Est!!! 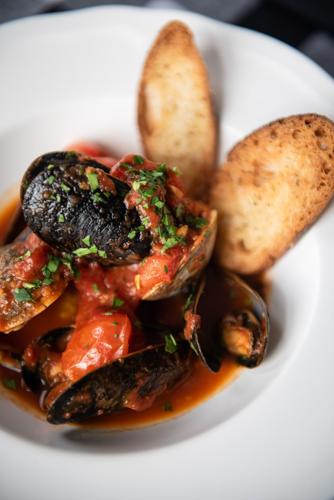 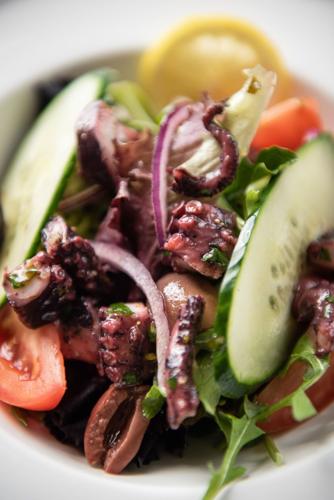 Along with the opening of the rooftop bar, The Mayfair Club, on March 17, all of the food businesses in ROAR are up and running. The final space, the ROAR Brands Theater on the lower floor, will open March 24 with a series of three performances by the Shamrock Tenors.

Est! Est!! Est!!! is the name of a famous Italian white wine, but the phrase’s origin comes from an old story about a German bishop on his travels. He directed a boy to travel ahead and scout the places that had good wine, writing “Est!” (Italian for “There is!”) on the walls of inns that served good wine. When the scout arrived in Montefiascone, where Est! Est!! Est!!! is made, he found the wine to be so good that he wrote “Est! Est!! Est!!!”

Conosciani also runs Zero Sei, a food stall in ROAR that features the piadinas, or flatbreads, of his homeland. Conosciani came to the United States in 2015 to work for his uncle Vinnie Mari at Vinnie’s Pizzeria on Peters Creek Parkway.

At Est!, Conosciani wants to offer fine Italian dining, with an emphasis on the seafood dishes he remembers from his childhood. “I’m from Rome, but the side of Rome near the coast, and I used to go to the markets to get fresh seafood. So, I want to do a lot of seafood here.”

The Est! menu is divided into antipasti, insalate e zuppe, primi and secondi, as with standard menus in Italy.

Antipasti, or appetizers, include cozze e vongole (mussels and clams, $16), with white-wine sauce with cherry tomatoes and garlic.

Soups ($7 to $9) include pasta e fagioli (pasta and white beans), zuppa di mare (seafood) and minestrone (vegetable). Salads incude insalata di polpo (octopus, $16), and insalata di tonno (tuna, $15). “The octopus is very tender,” Conosciani said, “because we’re doing it in the sous vide (a method of slow cooking in a vacuum-sealed bag). We’re using the sous vide a lot — like for the ossobuco.”

Est! also has a brick oven for pizzas and more, but the oven installation probably won’t be complete for at least a couple more weeks.

Desserts ($8 to $10) include cannoli, tiramisu, hazelnut gelato and panna cotta. The latter uses coconut and pear to make it gluten-free and dairy-free.

As with JL Caspers, Simon Burgess is the principal owner of Est!, with Joseph Correll as operating partner.

Burgess and Correll also own ROAR's Mayfair Club rooftop bar, which is open from noon until closing Thursday through Saturday and noon until 5 p.m. Sunday.

Hours: 4 to 10 p.m. Sunday through Thursday, 4 to 11 p.m. Friday and Saturday (reservation only, through Open Table)

GoPuff.com, an online grocery delivery business, has partnered with NBA All-Star Chris Paul to create a line of plant-based snacks.

A breakfast and brunch restaurant is coming this fall to the historic Henry Shaffner House on the edge of downtown at 150 S. Marshall St.

A local food truck ran into a problem when owner Yesenia Nava Attaway wrecked the truck after selling tacos and other Mexican fare her first day.

The Bagel Station is getting ready to open a new dining room at its original location at 129 Oakwood Drive, just a block off Stratford Road ne…

Below are some recently reviewed wines, roughly in order of preference:

Recipe Swap: 'Caviar' is a great way to use up late-season tomatoes and eggplant

This recipe for eggplant caviar is a great way to use late-season eggplant and tomatoes.

Operators of a winery in N.C.'s Brushy Mountains say their wine is worth the triple-digit price tag. “The vines are happy up here ..."

More than 25 years after opening its doors, The Carving Board still draws in crowds for its signature spicy sesame noodles, chicken salad, roa…

An employee sets up the dining room at Est! Est!! Est!!!